Peculiarities and habitat of the polar wolf

The description of a polar wolf is not very different from its usual gray brother, as a resident of tundra in the systematics of these animals is considered a subspecies of an ordinary wolf. However, it is extremely easy to recognize the photo of a polar wolf — its coat is much lighter — almost white (or white). 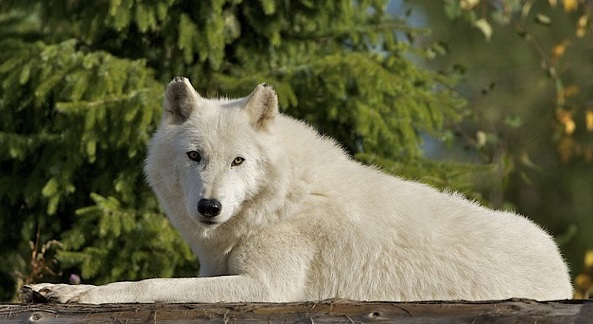 At present, the habitat of the polar wolf is tundra, although earlier its distribution was much wider. Despite the harsh climatic conditions, representatives of the species are well adapted to the long months without solar heat and light.

A small amount of food and constant sub-zero temperatures — sometimes the thermometer readings fall below -30 ° C. An adult individual at the withers reaches a height of up to 95 cm, the length of the body varies from 120 to 150 cm, and the weight is about 80 kg.

Character and way of life of the polar wolf

Tundra animals polar wolves lead a «family» lifestyle. That is, wolves are kept in packs, which most often include related individuals. So, the leaders are male and female — the producers of offspring. 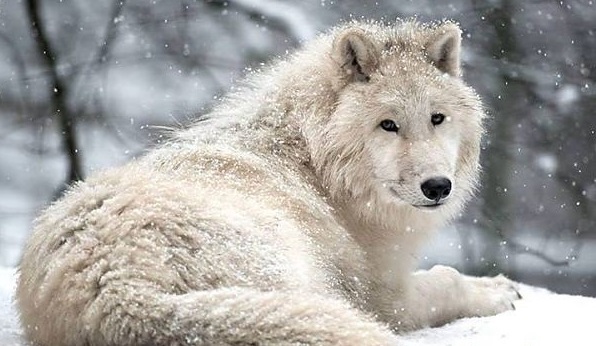 In addition to them, the group includes pups from the last and next to last mating. Sometimes single wolves are nailed to the pack, but they do not take part in marriage games only if they leave the pack and find a mate in a separate life. A large flock is considered to be in which 15–20 individuals go, but most often the number of group members is limited to 4–6.

The leader of the pack is the main male, who is the only one who has the right to mate, and is also distinguished by a proudly raised tail, while in the other polar wolves in the tundra (except for the leaders of other packs) they are omitted.

The main female, in turn, also has privileges and duties. Only she can have offspring within one group (the she-wolf is the “friend of life” of the pack leader), in addition, the main female follows the behavior of the other representatives of the weaker sex. Usually the main females are cruel and strict with respect to other females. 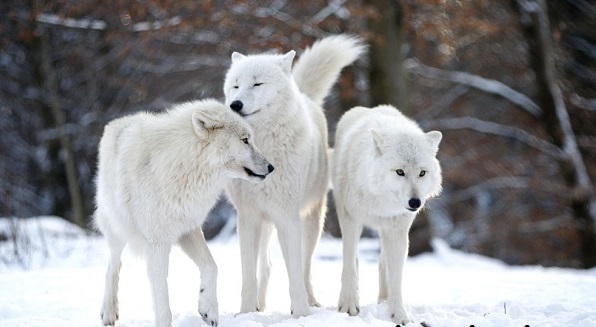 All members of the pack listen and obey the leader. This is manifested in his preemptive participation in the division of production. Communication occurs through a set of sounds: barking, roaring, squealing, and also through body movements. Thus, the leader is always proud, with his tail held high, his head and his calm gaze, while his vassals express obedience and respect with all their looks.

Due to the harsh strictness of the laws of the pack of the white polar wolf, fights and disassembly within the group are practically excluded. Only in exceptional cases, when a misfortune happens to the leader, may disassembly for leadership between secondary males occur.

However, most often long before the leader’s natural or tragic demise, his future successor is already known. This is the strongest and most intelligent of his sons, who still have not left the group to search for a life partner. 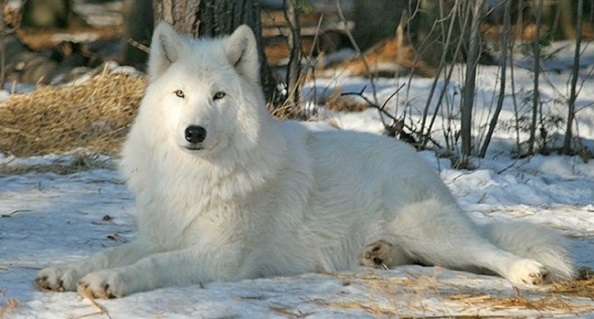 On the photo is a white polar wolf

Wolves are extremely hardy and adapted to life in adverse conditions. The thick, dense skin of a polar wolf protects him from winds and frost. During the search for the victim, a group or individuals can travel great distances at a constant speed of 10-15 km / h.

If the prey caught the eye, representatives of the species pursue it with the maximum speed possible for them — up to 60 km / h. For hunting, each flock has its own territory, which jealously protects from other wolves. Violent intraspecific fights occur if the flock enters foreign territory.

Hunting polar wolf can last several days or even weeks to no avail. This is due to severe weather conditions in which practically no species can survive, with the exception of musk oxen, deer, and hares. 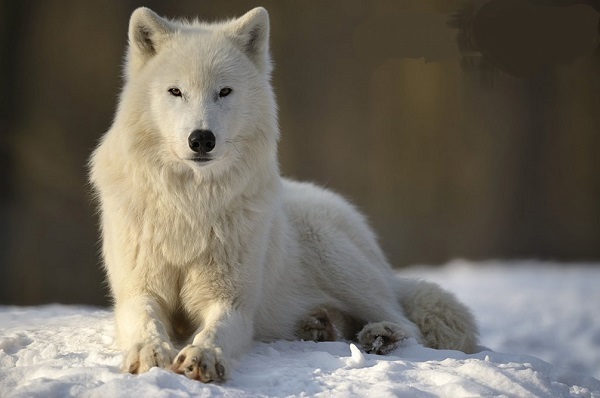 In addition, in the tundra it is difficult to find a place for an ambush, so the predators have to constantly move in search of prey, and then pursue it for a long time, as the victim also sees the pursuer from a distance.

If a pack of wolves stumbles upon a herd of musk oxen, a long chase begins. Then the hunted victims line up in a perimeter defense, separated from predators by strong horns.

The pursuers can only wait until the weakest mentally individual unlocks the defense and tries to escape. It was then that the wolves and attack, trying to lay a few victims.

As a rule, it is difficult for one wolf to cope with such a big rival, but, hunting in a pack, this is not a problem. If one wolf finally catches up and grabs the victim, several others rush to his aid. 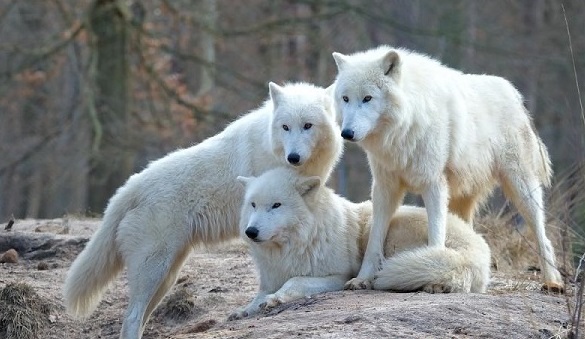 When hunting for small animals, such as hares, the help of the other members of the group is not needed. In addition, one adult wolf can eat the whole hare, along with fur and bones.

Severe weather conditions do not allow polar wolves to be gourmets — animals eat everyone who gets in their way, be it a huge elk or small hare, because it is unknown when the next time on the vast expanses of the tundra will meet prey.

The beginning of the marriage period falls on January. Within the group, only the leader of his partner has the right to mate. Outside the pack between wolves, real bloody battles for a free wolf take place. The strongest male becomes her companion, together they create a new pack. 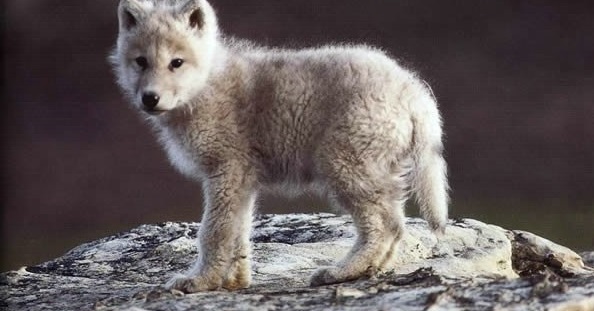 The newly minted couples go in search of their own territory for hunting and a convenient, reliable refuge for the birth of wolves. 2.5 months after mating puppies are born.

Usually there are 2 or 3. In exceptional cases, they can be both 10 and 15, but part of such numerous offspring, as a rule, die because of food difficulties.

Healthy babies are completely defenseless against the cold and other predators. Only after a couple of weeks, their eyes open, the babies learn to walk and start exploring the den.

The female is always nearby, warming and protecting offspring. The male at this time hunts hard to get enough food for the nursing mother. All wolves are wonderful parents and polar ones are no exception. 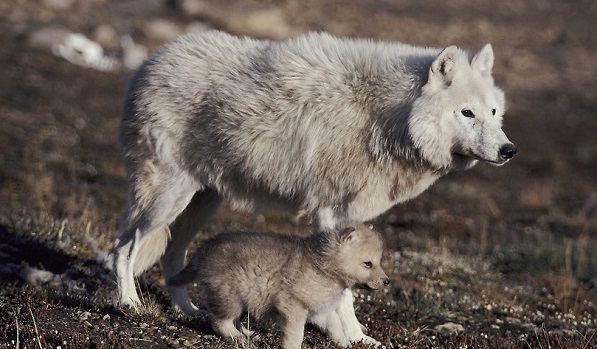 In the photo a polar wolf with a cub

Kids grow up under the strict supervision of their parents until they are ready to take a flock to create their own family. The average lifespan in the wild is 5-10 years.

Currently, there is a fashionable trend for keeping wild animals in captivity, on the Internet you can meet those who want to sell or buy a polar wolf.

However, such frauds are carried out illegally and are punishable by law. Such animals as wolves should not and cannot live in captivity! Moreover, due to the decrease in the number of individuals, the polar wolf is listed in the Red Book.