Pythons have long won the title of the largest reptiles on the planet. True, the anaconda competes with them, but after a reticulated python 12 meters in length was discovered in one of the zoos, the primacy of the anaconda is already in doubt. Many believe that the biggest snake is python. And yet, the main size of these snakes from 1 meter to 7, 5. 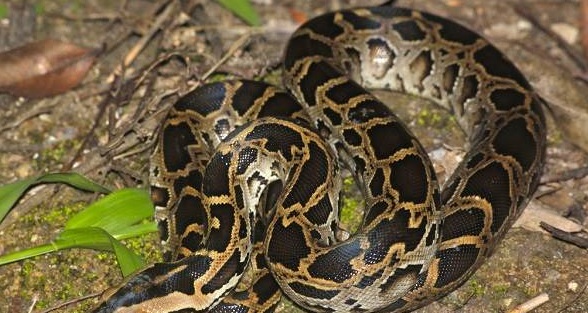 The color of these reptiles is too diverse. There are types of skin with brownish, brown tones, and there are those that simply amaze with their brightness and variegation. As a rule, this is all sorts of variations of spots. Scientists say that two pythons with the same spots cannot be found. There may be pythons and monochrome coloring (green python).

At first glance, all the snakes are “one person”, and differ only in size and how they get their food to the soul or kill them with poison. However, this is a misconception.

The python, just like the boa, does not allow poison into the victim’s body, the python is not a poisonous snake and prefers to suffocate future food. However, pythons and boas are two completely different species, and there are significant differences between them.

This is easy to explain — the boa constricts his prey with muscle force, he is not afraid that the victim will have to slip away. Python also strangles his victim, but very often he has to hold his prey with his teeth.

Pictured rudiments of the hind limbs of the python

An interesting fact is that there are rudimentary bones in the hemipenises of these snakes. Because of the presence of these bones, the snake python cannot draw this organ inward, but they can use such a bone during the mating season — they rub the female with them.

And he does it just — reduces the muscles of the whole body, which leads to warming. Most of all for a life in the wild nature of this reptile is suitable the climate of Africa, Asia, Australia. Once they were taken as pets to the United States, Europe and South America. Python has teeth, unlike a boa. 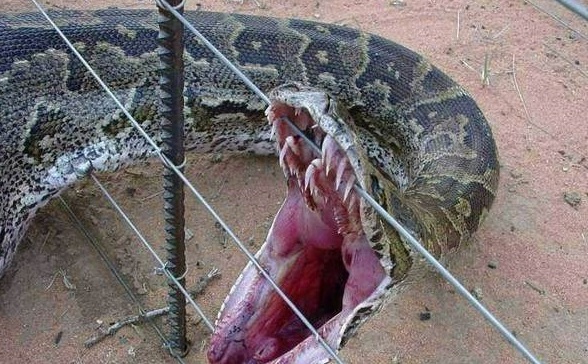 Python has teeth, unlike a boa.

But interesting fact-in Florida these reptiles managed to escape into the wild, and they survived. Moreover, the conditions of Florida came to them, too, and they began to multiply successfully.

On this occasion, even began to sound the alarm, allegedly, due to too many of these snakes disturbed ecosystem. But scientists do not agree, yet the number of these reptiles there is not so terrible. 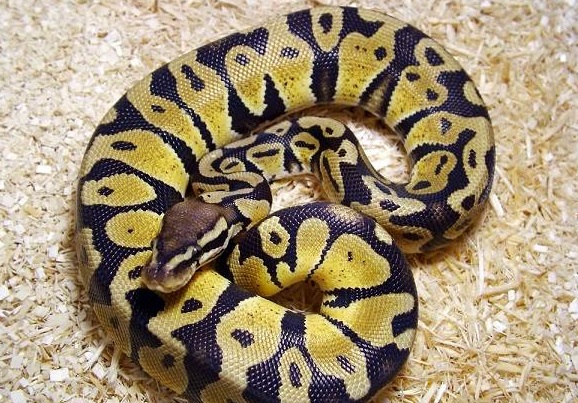 In the photo the royal python 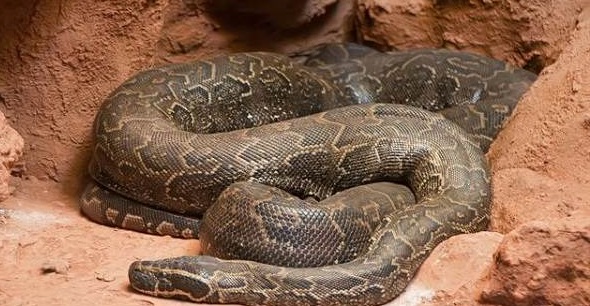 The spotted python grows only up to 130 cm. It lives in Northern Australia. Spotted python

tiger python is one of the largest snakes on earth. On the photo tiger 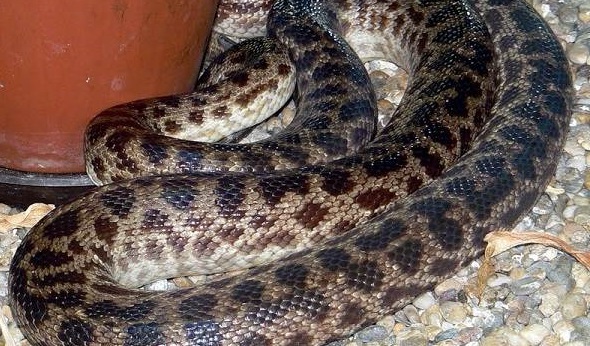 python burrowing python — according to scientists, python is not considered, it was ranked as a boa species. 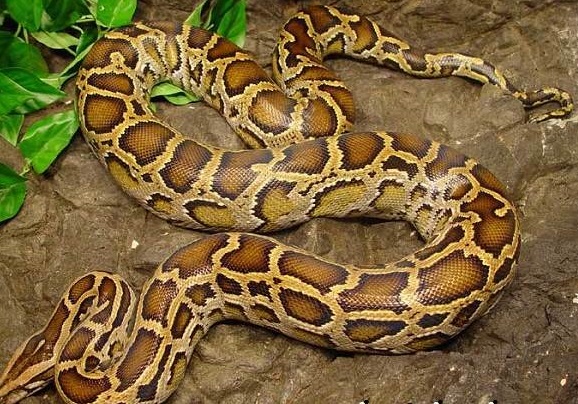 Often, if you look at the photo, a python is displayed there, rolled into a ball. Such a situation, as it turns out, very slows down the process of cooling the body and increases the chances of the snake to feel and recognize the prey.

Snakes, even of very large sizes, are great swimmers, and they love water. But the largest pythons are tiger, hieroglyphic, reticulated, they prefer to be more on the ground.

Here they search and catch their prey, here they rest, sometimes climb trees, but not too high. And there are also such species that do not descend to earth at all, and they spend their whole lives on trees (green python). They feel at ease on any branch, with the help of a tail 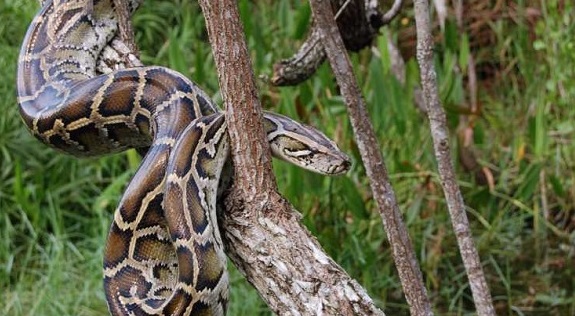 If the python is large, not many dare to attack him, he has too few enemies. But small snakes have a number of «detractors.» Taste snake meat is not averse to crocodiles, lizards, and even birds (storks and eagles). Do not refuse such prey and cats, and other predatory mammals.

Pythons are predators, and prefer to eat only meat. They first lie in an ambush and wait a long time for the victim. When the victim approaches the permissible distance, there is a sharp throw, the victim is knocked down, and then the python wraps around the prey, strangles it and eats the whole thing.

The larger the snake, the more prey it needs. Not too big snakes catch rodents, rabbits, chickens, parrots, ducks. And large reptiles attack kangaroos, monkeys, young boars and even deer. There is evidence of how the python ate the crocodile. 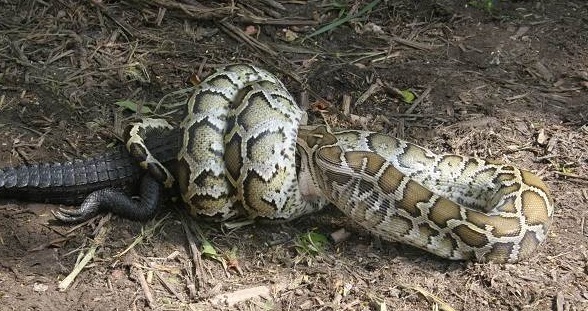 Among these snakes, the black-headed python is a special “gourmet”. Its menu includes only monitor lizards and snakes. In the process of fighting the poisonous victim sometimes bites the hunter, but snake venom does not act on this python.

It is believed that this reptile can not swallow prey, which weighs more than 40 kg, so an adult can not become food for the snake. In addition, the human figure is not a very convenient object for swallowing.

With animals, the python does this; it begins to swallow its prey from the head, the snake’s mouth stretches to incredible dimensions, and then gradually the body of the snake begins to stretch onto the carcass like a bag.

Moreover, at this time the snake is too vulnerable. It is extremely inconvenient for the person to do this, first the head passes, and then the shoulders advance, and this prevents the body from moving easily into the serpentine stomach. And yet, cases of attacks on humans were recorded.

After eating, the python goes to rest. In order to digest food he will need more than one day. Sometimes this digestion reaches several weeks or even months. At this time, the python does not eat. Known is the case when the snake did not eat 1, 5 years.

Propagation and lifespan of pythons

Pythons bring offspring only once a year, it happens that conditions are unfavorable, and then reproduction occurs even less frequently. The female, ready for mating, leaves traces after them, and the male finds her by their smell.

In the photo laying python

The female, after 3-4 months, makes laying. The number of eggs can be from 8 to 110. In order to maintain the desired temperature in the clutch, the snake is placed on them, rolled up in a ring and does not leave the clutch under any circumstances.

She does not leave the clutch even to eat, the snake is completely hungry all two months. It also regulates the temperature — if it becomes too hot, then the rings are moved apart, giving the eggs access to cool air, if the temperature drops, that the snake begins to lift it with its body, it trembles, the body warms, and the heat is transferred to future babies.

Small pythons at birth are only 40-50 cm long, but on the other hand, they no longer need help from their mother, they are completely independent. And yet, quite adult, that is, sexually mature, they will only be 4-6 years old.

The life span of these amazing python snakes ranges from 18 years to 25. There is evidence of pythons that have lived for 31 years. However, this data applies only to those copies that were in zoos or nurseries. In the wild, the life span of these snakes is not established.