Ties — an example of gender equality among birds. Both females and males of the species are involved in hatching eggs, protecting chicks. On the clutch, the birds alternate each other. In bad weather, they give up and take “fasting” more often. 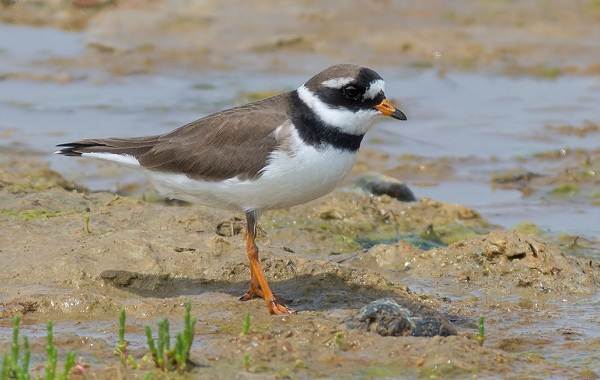 If there is an enemy nearby, the tie falls away from the nest, spreading its wings, taking an unnatural posture. Thinking that the feathered is wounded, predators are distracted from the nest, rushing for an equally easy, but larger prey.

Pretending to be sick, the tie removes the attacker from the laying. Few birds so selflessly protect offspring. It is enough to recall cuckoos throwing eggs into other people’s nests, or storks throwing clutches at the first rustle.

Description and features of the sandpiper snipe

Kulik Tie — a bird about 20 centimeters long and weighing 50-80 grams. It is feathered gray-brown from the back, and white from the abdomen. At the crown of the head there is a dark cap, and around the neck there is a tie. 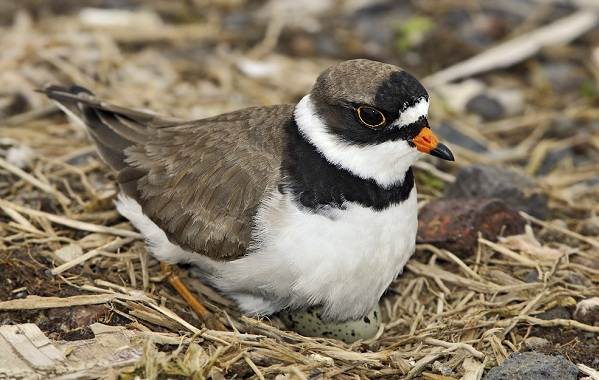 Dark lines pass from the beak through the eyes of the necktie. Between the eye rim and cap runs a line of light feathers. The color of the beak of the tie varies, having black in winter and yellow in summer. However, in the warm season, the dark tip remains on the beak of the plow.

The beak of the tie-knot does not differ in length, therefore the bird is referred to the short-billed sandpiper. The hero of the article differs from other representatives of the group in an orange-red tone of legs.

In the behavior of a tie, like other plots, fussy and loud. The mobile bird quickly minced on the ground and rapidly, with unexpected turns, flies through the air. 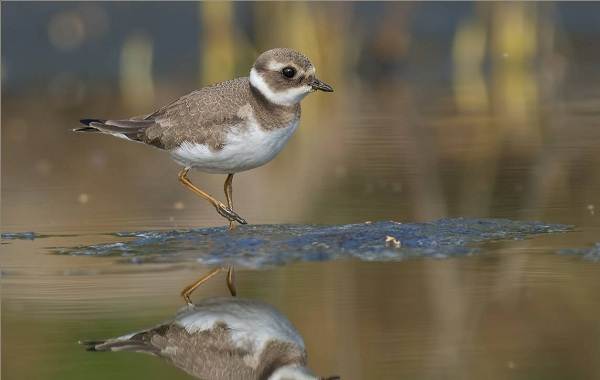 Another hero of the article is bold. The bird readily rushes to drive away large predators such as falcons and skuas . It is not easy to track them down. The color of the tie merges with the surrounding landscape.

Lifestyle and habitat of the sandpiper snipe

Settles hero articles on the beaches. The tone of the bird’s back merges with the sand. Occasionally, tie knobs settle on pebble beaches or mud flats. The main thing is that the coastline is flat. Such places are all over Russia .

Therefore, the tie is a bird common in the middle belt of the country, and in the south, east, and the northern tip of the state. However, from the cold terrain waders fly away in the winter. Populations return from the south in late April, early May.

Zoo winter in Africa , Asia. Also outside of Russia, the tie nest in North America and throughout Europe. At the same time, the habitat of the tie is fractional. In one area there are many birds, but there is no other at all. 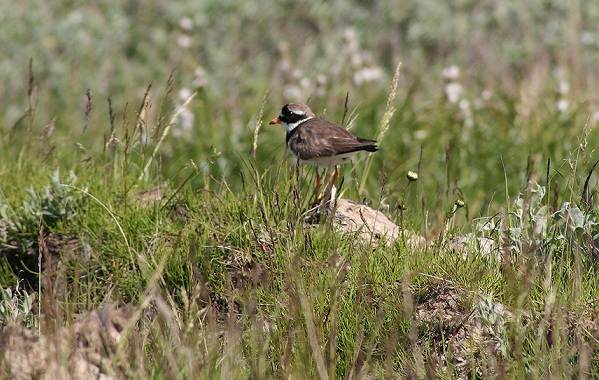 So, in Russia, the hero of the article rarely appears in the middle lane; it does not nest in the Crimea, the basin of the upper and middle Volga, on the Ussuri and Amur rivers.

Tie Most of the subspecies of tie knots are almost identical in appearance, being called differently only because of the distribution of these or those points on the planet. In Greenland, for example, lives Hiaticula Linnaeus. In North America, the plover Semipalmatus Bonaparte is known. In the southeast of Asia, the species is Grayed Gray.

Outwardly, Charadrius Hiaticula or webbed tie stands out against the background. The photo shows a bird with webbed feet. Other zyukov toes are separate. 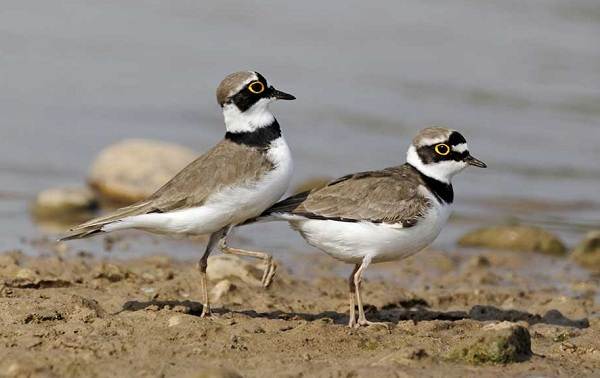 The membranes on the paws of Charadrius Hiaticula indicate a particular relationship of the bird to the water. It is in her feathery that prefers to get food. Plover swims well. The species is settled in North America, for example, Alaska.

For nesting, the hero of the article chooses the forests of the tundra, looking for lakes and streams in them. In the fall, the Charadrius Hiaticula goes to the south of the continent, choosing already deciduous thickets there.

Living on the shores of reservoirs, the bird tie  feeds on the crustaceans, mollusks, worms, insects and their larvae found here. The diet varies by location and season. In winter, for example, birds are satisfied with mollusks. There are no insects and worms in the cold. In the spring, tie knobs catch mostly larvae, bugs, butterflies. 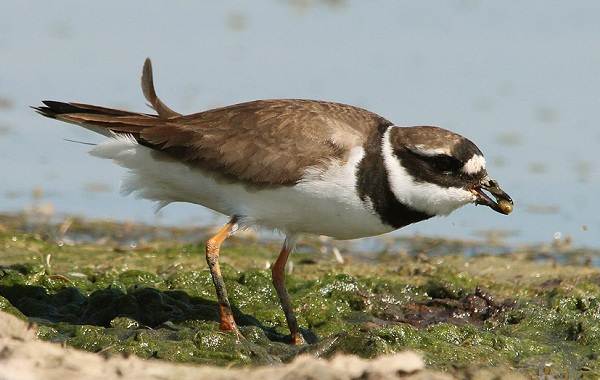 In the water for food waders rarely go. Edibles are found at the edges of ponds and on the beaches themselves. Catching prey on them, the plover is enough and grains of sand. Therefore, a quartz-mineral mass is found in the stomachs of neckstones along with the proteinaceous one.

Ties monogamous, true to a single partner. For the winter couples can be separated. Reunited in the spring. For currenting and building nests, the zoo animals choose different places. Initially, they arrive on the tokovania territory. First come the females. After a week, the males fly. Having broken up into pairs, the birds weed for 2 weeks.

Being tied to partners, tie knots «shrink» and with nests. From year to year, feathered occupy the house once built. If it is not possible to settle there, a new nest is built closer to the old one. 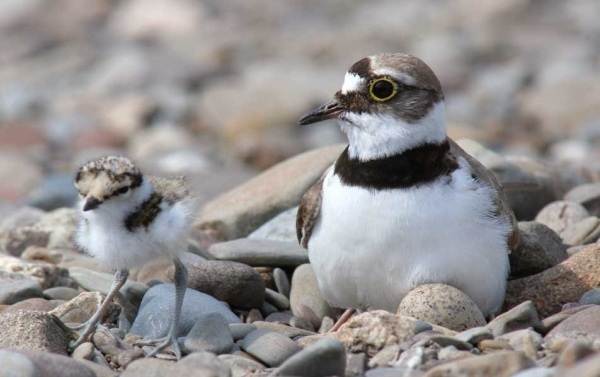 Losing a partner, the tielers continue eagerly to protect the nest built with it once. It represents a hollow in the sand. Sometimes, it is lined with fragments of the shells of mollusks and small stones. A male is preparing the nest. Sometimes, he may choose an existing recess as a place for laying, for example, from the hoof of some animal.

Lay the eggs of 3-5 eggs. Usually, there are 4 of them. The color of eggs makes them invisible among the sands and gravels. Accordingly, the color of eggs is beige or grayish-white.

In the length of the egg, the plover does not exceed 3.3 centimeters. The masonry is completed about a week after it starts. Between the appearance of eggs, there are at least a day, and more often 48 hours. Accordingly, the laying of 4 capsules takes 5-6 days, and out of 5, the whole week. 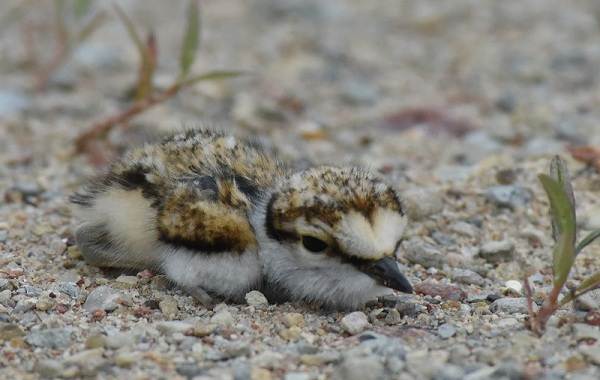 Tickers hatch eggs for almost a month. After another 3 weeks, the chicks stand on the wing. For parents, this is a signal to start the second laying. She is limited to birds that have managed to save offspring. When masonry die, tielers continue to try to extend the genus. It happens up to 5 visits.

Not all the eggs of the hero of the article become chicks. The percentage of hatching is equal to 37-40. Half the chicks die in the first months of life. So, 1-2 birds eventually come out of the standard laying. In nature, they will live for about 4 years, leaving offspring at least 6 times, after all, tie ties reach puberty at 12 months.

Cat litter and its types