Roundhead lizard. Lifestyle and habitat of the roundhead

The most ancient reptiles that inhabit the desert and semi-desert territories are round heads. This type of «agapovy» lizards has many subspecies. And only these numerous reptiles can be found among the sands. 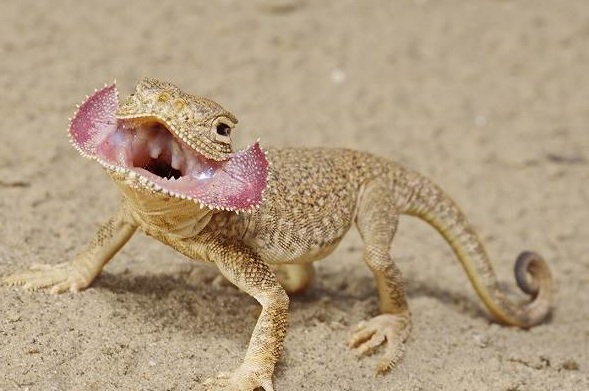 Roundheads are a genus of lizards with small and medium body sizes. The main feature of the animal is a round head and a flat torso. Depending on the subspecies (approximately 40), the length of the body can be from 5 to 25 cm.

Sometimes the protrusions form a cap, it is precisely for it that the lizard subspecies are distinguished. 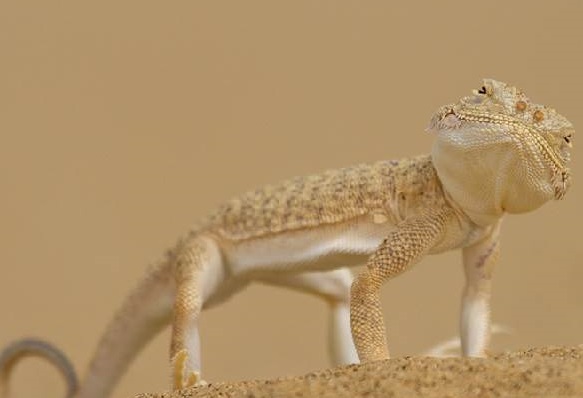 The roundhead lives in an area where there is no vegetation, in sand, clayey slopes and areas with fine gravel. The distribution area is the south-east of Europe, Central Asia, the countries of the Arabian Peninsula, Iran, Afghanistan.

The nature and lifestyle of the roundhead

A lizard with a round head and shifty eyes cannot be confused with other sand dune specimens. She is friendly and curious in character. It seems that nothing will escape from her keen eye. The ability of an animal to burrow into the sand is admirable.

Roundhead Lizard leads a daytime lifestyle. It is pleasant to observe her habits, she then peacefully basks in the sand, then in a second she already digs in between the grains of sand. In this, she is assisted by special processes-skis, which contribute to quickly penetrating into the substrate. Fully buried in the sand, only eyes and nostrils can look out from above, so the reptile is very difficult to see right away.

What does a roundhead do the rest of the time? Often lizards are busy exploring new territories, hiding from danger and looking for food. They gather in small groups, mostly young.

A characteristic feature of the animal is to adapt the external coloring for the environment. The color can be different: yellow, gray, light or dark brown, fawn and so on. 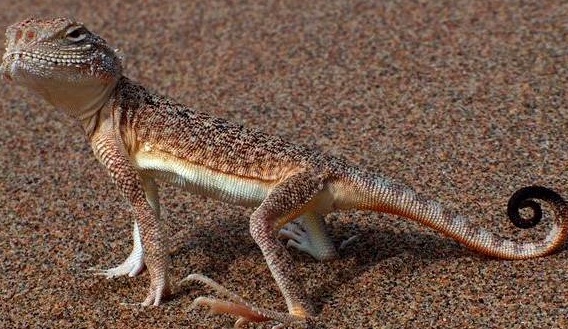 Round-eared eagle is the largest representative, reaching sizes of 11-20 cm. The sand-colored coloration smoothly turns gray. The belly is milky or white, in the chest area there is a speck of black color. The tail is curled at the end and covered with black. Leads daytime life, busy digging holes and searching for food.

This subspecies is territorial, able to protect the area and other lizards. At the moment of danger, when it is impossible to hide, the eared round head takes a pose for intimidation. Widely spreads the paws, inflates the body, opens the mouth, the inner part of the mucous reddens. It can float your teeth or jump straight at the enemy.

Due to the fact that the eagle has an attractive appearance, the lizard often gets a trophy to poachers. The interest is mainly monetary, because it can be profitably sold or mummified.

Because eared roundhead is protected by many Central Asian states.

The sandy roundhead has a small size and reaches a length of 10-15 cm. It inhabits the steppe and sandy zones of Turkmenistan, Kazakhstan and Uzbekistan. This species is considered an isolated population. The body is colored beige (sandy), there are black dots all over the body.

The lower part is white, the head is covered with ribbed scales. At the edges of the body are small spines, forming a tracery fringe.

Krugolovolka-whirligig — a representative of the family «agapovyh», small size (12-15 cm). This subspecies has an almost smooth surface of the body, in some places ribbing appears.

A distinctive feature is a slopingly flat head. Color prevails from dirty sand to all shades of gray. The lower part (abdomen) is white, the tail is lighter in comparison with the main color, the tip is black at the bottom. They live in Central Asia, Mongolia and China. They are sedentary, they are awake during the day, they bury themselves in a hole at night. 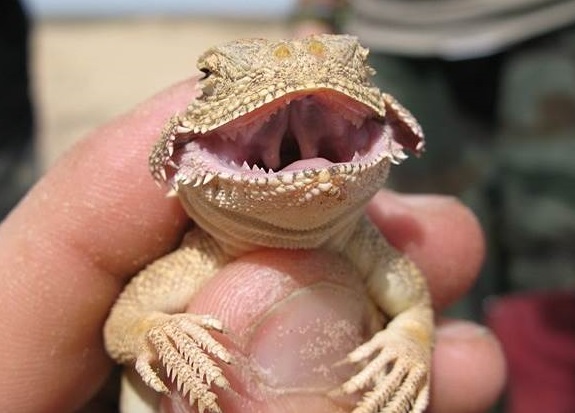 The spotted roundhead is a representative of a subspecies that can go deep into the loose soil and live under the ground. This is facilitated by the ability of the paws of one side of the body to produce movements in different directions.

Moloch is an unusual and rare specimen of round heads. The body is flattened, reaching sizes of 20-22 cm. The head is small, the paws are long, clawed. The main feature is that the whole body is covered with hornlike spikes of various sizes. At first glance, Moloch will seem like a miniature dragon.

Scalding on the head and throughout the body give it an awesome appearance. The coloring adapts to the habitat, ambient temperature and physiology. The color can be bright yellow, all shades of brown and even red palette. Throughout the body there are typical blotches of the same shades.

Moloch lives in the eastern regions of Australia, leads a daytime life, moves very slowly. Digs shallow burrows, does not have such a speed of burrowing, as, for example, eared fish.

It feeds only on ants, swallows them with the help of sticky tongue. Another unusual possibility of moloch is the absorption of water (rain or dew) through the pores in scales and steep edges of the mouth. Photos of this special type of roundhead just fascinates.

The main ration of the roundhead is insects and invertebrates. Depending on the habitat, the lizard can feed on bugs, ants, spiders, butterflies, their larvae, moths. With the help of sticky tongue and sharp eyes of reptiles, they manage to regale themselves. 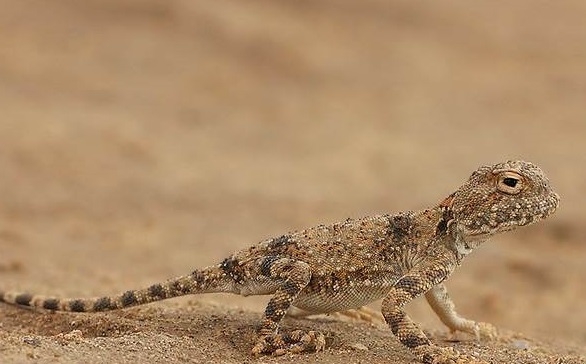 Moloch eats forager ants in a very interesting way. Due to the fact that the ants during the danger of isolate formic acid, the lizard tries to capture the insect during their work (transporting cargo along the formwork path). During this period, the insects are busy and may simply not see the impending danger.

Reproduction and lifespan of the roundhead

It is quite difficult to visually distinguish the female from the male, they are about the same size. If you look closely, then the male has a brighter color than the lady. The marriage period falls on the month of April. This is the time when the lizard comes out of hibernation.

In the process of courtship, the male finds an exalted place, puts the tail vertically and starts swinging it in different directions. At the same time, he demonstrates the bright color of the lower part of the tail. If the lady liked, the boyfriend bites the belly or upper body of the female.

Almost all subspecies of round heads lay eggs. In one clutch a female can have from 1 to 7 eggs. For example, in the valley of the Araks, lizards clutch three times per season. Kids hatch on the 40th day. 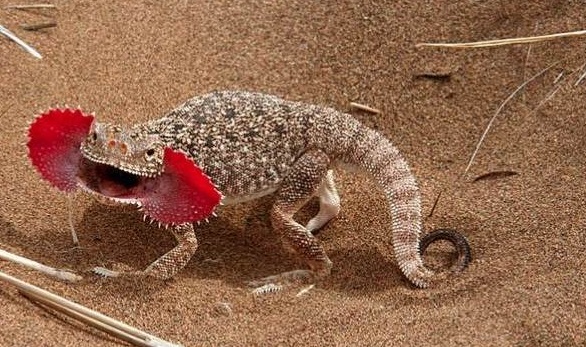 In the photo a roundhead eared

During the wintering period, the main offspring die, only 15–20% of the brood survive until spring. The main reason is natural enemies (snakes, boas, birds and pythons). Lizard life span varies in the range of 2-3 years, not more.