Peculiarities and habitat of salamander

The salamander is an amphibian animal , which people were afraid of in ancient times. Myths were written about her, and mystical powers were attributed to her. This is mainly due to its toxicity and bizarre color. If you translate her name from the language of the Persians, you get — «burning from the inside.» 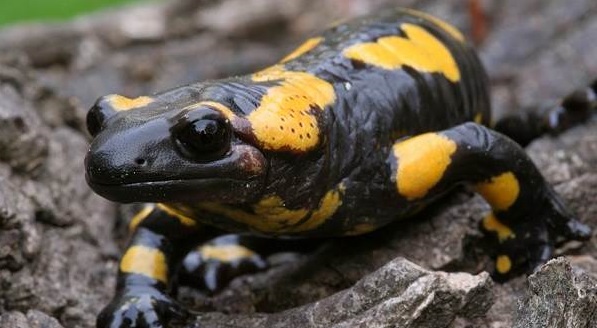 Salamander is classified as an amphibian animal , although it looks like a lizard by its appearance , you should not confuse them. The latter are reptiles. The body of this representative of amphibians is elongated, and smoothly passes into the tail section. Dimensions range from 5-180 cm. The skin is wet and smooth to the touch.

The color scheme, in which different types of salamander are painted , is almost limitless, it can be seen on the set of photos of these animals . Amphibian can be black, yellow, olive, red and other shades. And her back is decorated with stripes, dots and specks of various shapes and shades.

The salamanders have short and stocky legs. There are 4 fingers on the fore limbs, and 5 on the hind limbs. There are no claws. On the flattened head are bulging, dark eyes with rather developed eyelids. 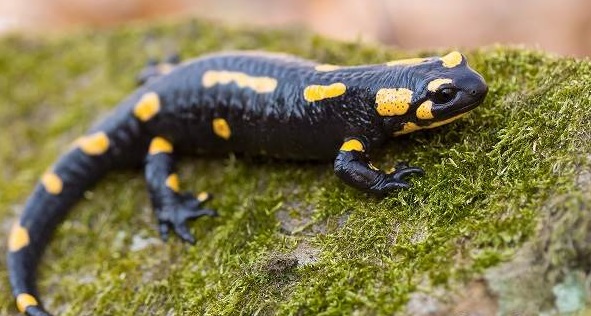 There are special glands (mumps), which are characteristic of all amphibians. They then produce a poisonous secret that causes convulsions and paralysis in animals trying to eat them.

These amphibians have an amazing property: they know how to grow their lost limbs or tail. In the process of evolution, the group was divided into pulmonary, hidden nibs and real salamanders.

They have a different respiratory system. Pulmonary breathe through the skin and mucous membrane of the mouth. The scapulas use the gills, and the latter have full-fledged lungs.

Salamanders live in almost all countries, with suitable warm and humid climate. But their greatest diversity is found in North America. 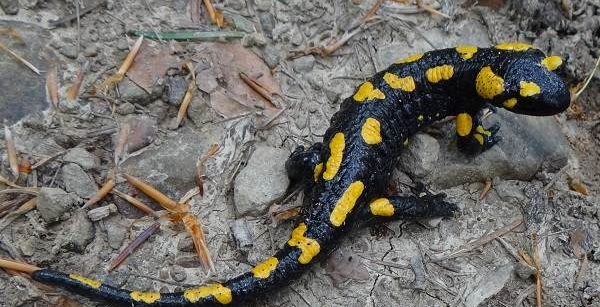 It is impossible to describe all species of this animal in one article, therefore the most unusual representatives of the group of salamanders are presented below .

The largest amphibian on the planet is the Chinese giant salamander. You can meet her only in the waters of this country. At length, it reaches 180 cm, and weighs more than 70 kg.

In the photo is the Chinese giant salamander

An unusual way of hunting in the next species is the Luzitan salamander. She, like a frog , catches prey with her tongue. Her body color is black, with two narrow golden stripes running along the ridge. She lives in Spain and Portugal. 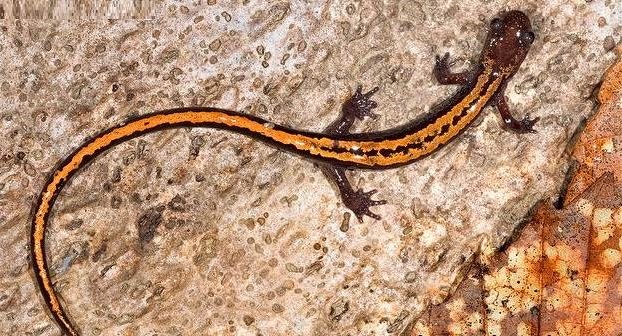 In the photo Luzitanian salamander

Alpine salamander lives high in the mountains, it settles between the rocks, near the mountain rivers. The wood salamander cleverly creeps on trunks, well jumps on branches and beeps loudly. Her color is camouflage: light or dark brown. It lives in Mexico and in the California state. 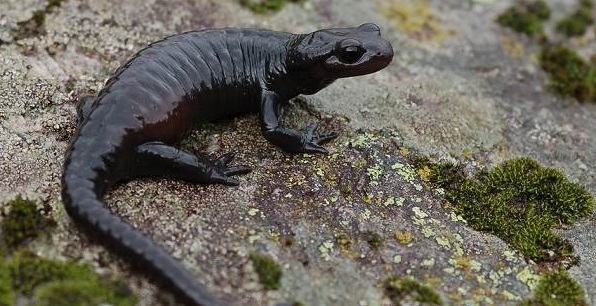 The most prolific spring salamander lives in the USA and Canada. It can lay more than 130 eggs at a time, it is easy to recognize it by its red color with small dark spots. 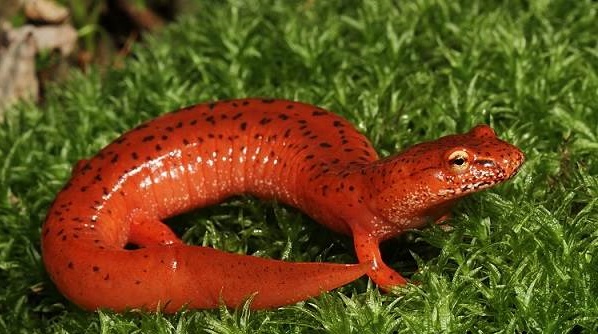 The most popular of salamanders is fiery . In addition, she and the champion in the length of life in her group — 50 years. She has a bright color: black and orange. The water she eschews, and descends to her exclusively during the breeding season. In the photo you can see the beauty of the fire salamander . 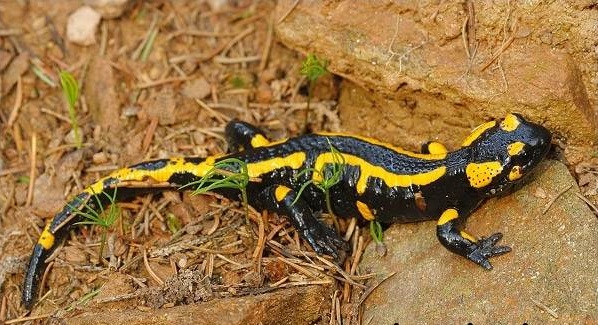 On the photo fire salamander

In the Carpathians, it is possible to find the most poisonous representative of this group — the Alpine black newt . As groups, these amphibians live in rock gorges and in damp forests. Their poison causes severe burns on the mucous membranes in humans. 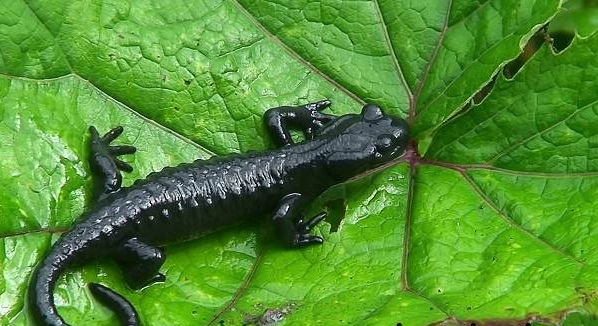 The character and lifestyle of the salamander

The salamanders, though lonely, are gathered in groups before hibernation, in October. Together to survive this unfavorable period for them on land, in heaps of fallen leaves.

They hunt mostly at night, during the day hiding in shelters from the direct rays of the sun. Near the place of their habitat, as a rule, there should be a reservoir. They catch the prey with a sharp jerk, and cover it with their own body. After a short struggle, they swallow the whole victim.

The salamander has many natural enemies to escape, the animal leaves its tail or limbs in their claws and teeth, and quickly runs away. Although these amphibians and poisonous, but their secret does not cause fatal harm to humans.

It can only cause irritation on the hands, and once on the mucous membranes it can burn the mouth or eyes. Therefore, having touched the amphibian, it is necessary to wash your hands well so as not to cause harm to yourself due to carelessness. 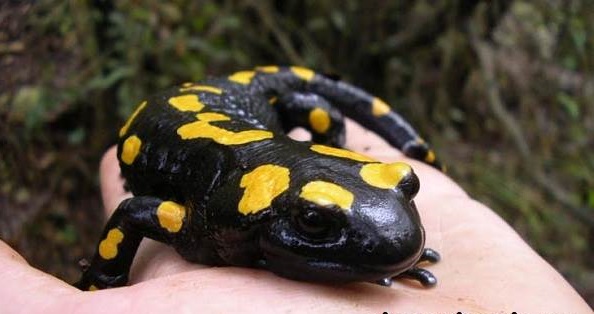 Today, many people want to keep this mythical amphibian at home. You can buy a fire salamander in special nurseries or in pet stores. For life, they will need a large horizontal terrarium.

At its bottom is usually poured a mixture of leaves, sphagnum and peat. Inside arrange a small pond. The lighting should be muffled, and the temperature should not exceed 25 degrees.

The diet of the salamander is largely dependent on its environment. Amphibians living on land, hunted by spiders , cicadas , butterflies , slugs and earthworms.

Larger members may attack a frog or a small newt . Water-loving salamanders prefer to fish , crayfish, crabs , shellfish and amphibians. 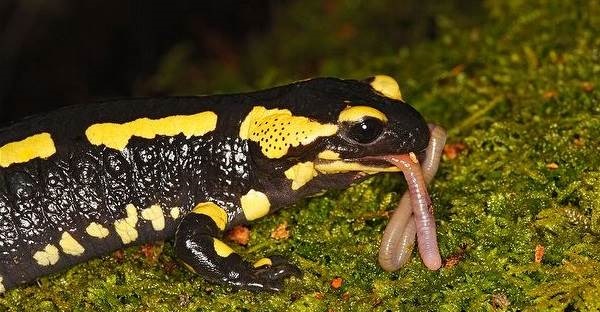 Reproduction and life expectancy of a salamander

On average, salamanders live for about 20 years, the duration depends on the size of a particular species. Small species reach sexual maturity by the age of 3, and the larger ones reach the age of 5. The abdominal nibbies lay eggs, and real salamanders live viviparous or egg-bearing.

Amphibians breed for a whole year, but the peak of activity is observed in spring, after leaving hibernation. During this period, the males swell iron, filled with spermatophore.

They lay it directly on the ground, and the female takes up this material with a cesspool. In the aquatic environment, fertilization occurs differently: the male releases the spermatophore directly to the deposited egg. 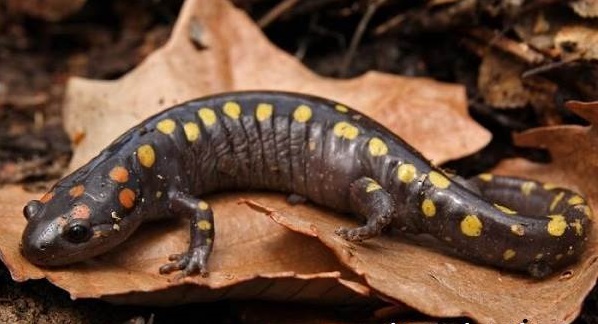 In viviparous larval development lasts 10-12 months in the womb. But out of 60 eggs only 2 cubs are born, the rest of the eggs are only food for them. Larvae of aquatic amphibians come out of eggs after 2 months. And already born with the formed gills.

Dwarf salamander attaches its eggs to the roots of underwater plants. The larvae appear after 2 months, and after another 3, the young individuals come ashore and begin an independent life.

Many of the species of these amazing animals are listed on the pages of the Red Book , and are on the verge of extinction. People put a lot of effort into preserving these species: they create specialized nurseries and reserves.