Sargan differently is called as fish as an arrow. The national name emphasizes leanness and elongation of an animal. His body reminds a tape, and a long nose – a needle. Jaws swing open, as if a beak. Inside it is covered with sharp and thin teeth. 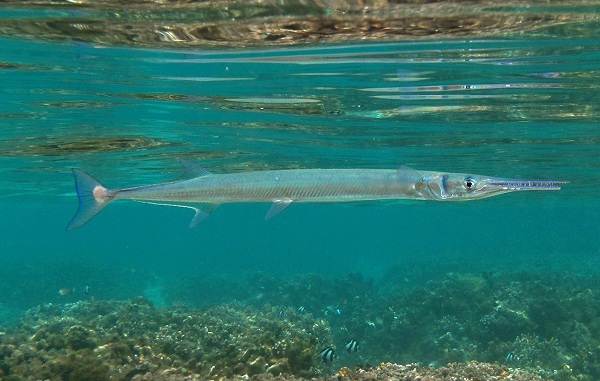 Appearance exotic, and taste excellent. At a sargan fat, white and soft meat. Bones in it at least. Therefore fishermen aren’t confused by small «exhaust» of meat. If you undress fish an arrow for the first time, it is interesting to look not only at its exterior. The inhabitant of waters has green bones.

Description and features of a sargan

Sargan — fish luchepery. There are still cartilaginous, for example, sharks and slopes. Luchepery fishes share on nadotryada. Sargan is included in «the presents bony». The group and is called — «sarganoobrazny». The family is called sarganovy. For his representatives are characteristic:

Green color gives to a backbone of a sargan biliverdin. It is one of bile pigments. The substance is a product of disintegration of blood little bodies of marrow of fish. 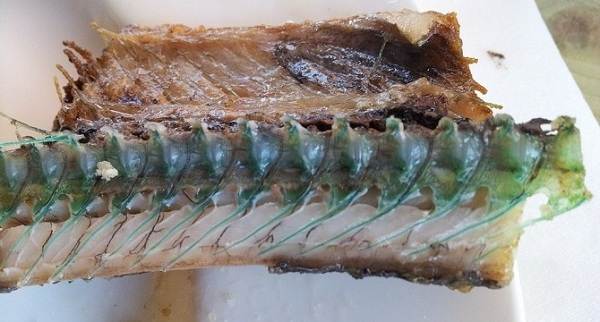 At heat treatment of a bone of a sargan become green

Biliverdin is unpleasant on taste. However there are bones of a sargan there is no need. Green the skeleton, by the way, becomes during heat treatment. Biliverdin isn’t poisonous, though frightens off many in the color. Color of a sargan from above too includes the green. To them the back of fish casts. Sides and paunch the silvery.

In what reservoirs meets

In family sarganovykh of 25 species of fish. Two tens live in the seas. Fresh waters to liking only to 5. The rivers and lakes of a sargana occupy only in a tropical belt. Subtropics and a moderate belt arrange sea fishes. 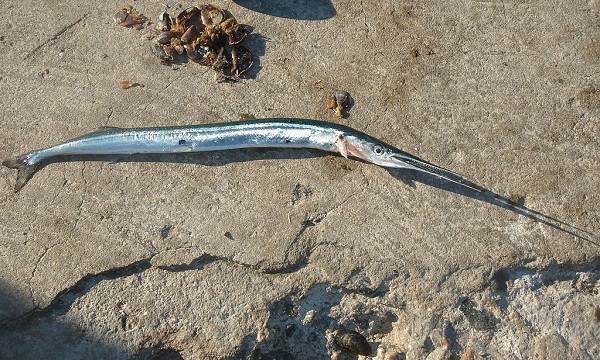 Fresh-water types catch in Ecuador, Guiana and Brazil. In their waters there live 2 look. 2 more live in reservoirs of India, Ceylon and Indonesia. The fifth of fresh-water sargan meets in Northern Australia.

Both fresh-water, and sea fishes arrows in the majority keep at coast and even bury in sand at the moments of otliv. On a photo sargan sometimes appears as the tip of a bony nose, or tail which is sticking out of a beach edge.

Choosing a landscape of a bottom, sargana prefer the difficult. As a rule, fishes arrows meet near reeves. Afar from them and coast swim away single types of sargan, for example, the tape-like. 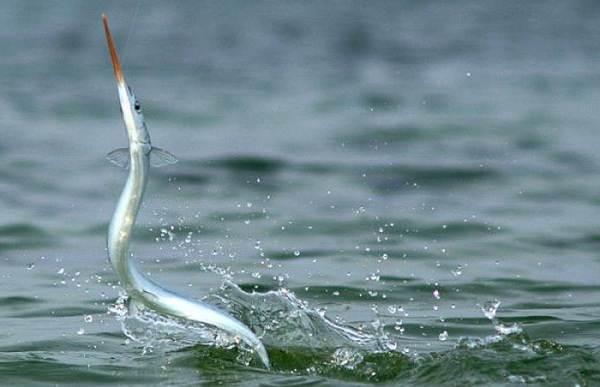 Types of a sargan

Among 25 types of the hero of article the smallest fresh-water. However, all fishes arrows, are generally small. However one giant lives in the sea. Also we will begin transfer of views with it:

1. Crocodile. Reaches 2-meter length, for what is nicknamed by the huge. One more name of an animal — an armor-clad pike. In difference from the majority of sargan the body of the crocodile is covered with rigid scales. They compose the relief similar to leather of a crocodile. The giant about 6 kilograms weighs. 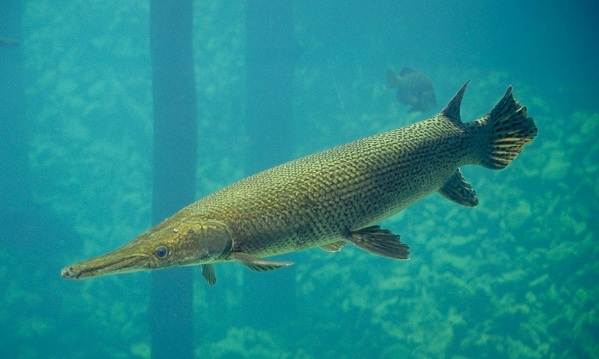 2. European. The up to 60 centimeters long grows. Fish occupies Atlantic, meeting at coast of Africa and the Old World. Floating Mediterranean, the animal gets to the Black Sea. Sargan is allocated in separate subspecies here. It and is called — Black Sea. This Sargan is a little less than majority of the European individuals. On a back of an animal there is a dark strip. 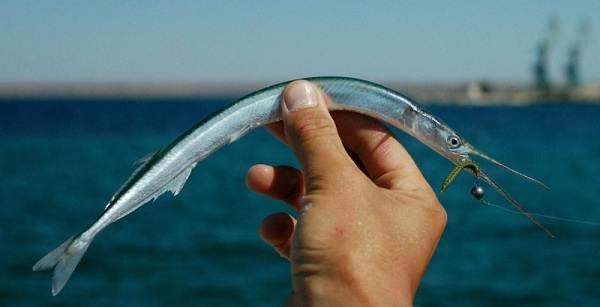 3. Pacific. In Russia is called as the Far East. Meets in the southern waters of Primorye, in particular, in the Sea of Japan. Fish reaches meter length. In waters of Primorsky Krai the animal acquires fat and spawns, swimming away there is exclusive in the summer. On each side a Far East sargan blue strips are seen. 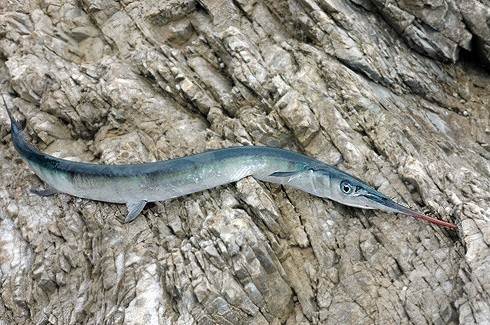 4. Fresh-water. Under this name all fresh-water sargana are integrated. They are seldom extended more, than on 30 centimeters. It together with addiction to fresh water allows to keep fishes arrows in aquariums. As sargana predators, arrows you shouldn’t settle to them tiny guppies. Settle to som, large tsikhlida. 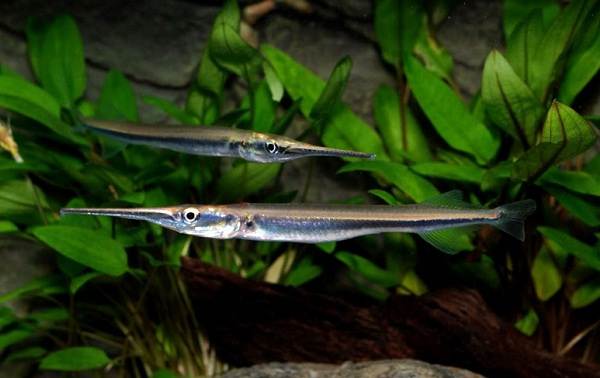 5. Chernokhvosty сарган. Has a round spot of anthracitic tone on a tail. On sides of an animal there are cross strips. In length chernokhvosty individuals reach 50 centimeters. The second name of a look — Black Sargan.

In Soviet period the Black Sea subspecies of a sargan entered the five of leaders of trade. By the 21st century the number of the Russian arrows was reduced.

Food and way of life

The thin, squeezed from sides and long body of the hero of article assumes the wavy movement. Fish floats like water snakes.

Sargana in the top sheets of water float, that is concern to pelagic fishes. Still arrows gregarious. Gathering in many thousands slip-ups, animals gather speed to 60 kilometers per hour. We will compare an indicator to sprint of the hunting pikes. Sargana are also externally similar to them.

Keeping at a surface, sargana can breathe. The swimming bubble of arrows starts carrying out functions of lungs. Transformations happen in waters poor in oxygen or during a zaryvaniye of fishes in sand.

In food of a sargana aren’t legible, are enough crabs, small fishes, caviar, insects, invertebrate, even the relatives. It arrows too are similar to pikes. 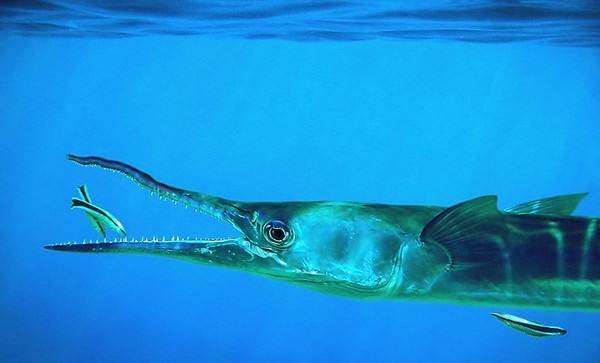 Illegibility in food — one of the factors which allowed sargana to survive for millions of years. Fish arrow treats the relic.

Catching of a sargan

Catching of a sargan is fascinating and dangerous. Acerate teeth of the inhabitant of waters put painful wounds. The pointed and strong nose of an animal can pierce a flesh. It becomes possible at a speed. Having gathered a full speed сарган can face the person in two cases:

It is possible to prick about a needle and when fishing from the coast. Catch a sargan from distance of 40 — 100 meters. It is necessary to take the caught individual under the head, as if to a dragon. The animal will coil, try to bite. To be enough the needle which is broken from a hook coiling on the earth too it is necessary carefully. 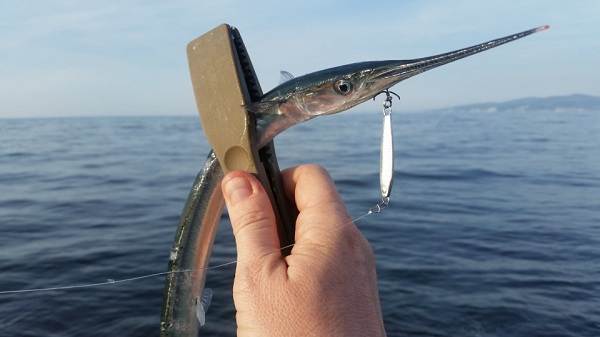 It is possible to catch the hero of article not only from the coast, the boat, but also under water. In honor of fish arrow even the popular diving suit is called. «Sargan» fans of spearfishing include in «top-10 the best in the domestic market». Actually, diving suit not one. Under the Sargan brand more than 10 models are issued.

For a throwing of caviar of a sargana choose secluded corners among reeves, underwater vegetation, keeping at coast. Reproduction is started by 5-year man’s individuals and the 6-year-old female. It is age of puberty. Fishes are more senior, clearly, too participate in mating dance.

Caviar of a female is thrown several times with an interval of 2 weeks. Having started in April spawning comes to an end only by August.

Seaweed are necessary not only for masking of berries. Capsules fasten to plants by means of sticky threads. Caviar of a sargana dispose close to a surface. 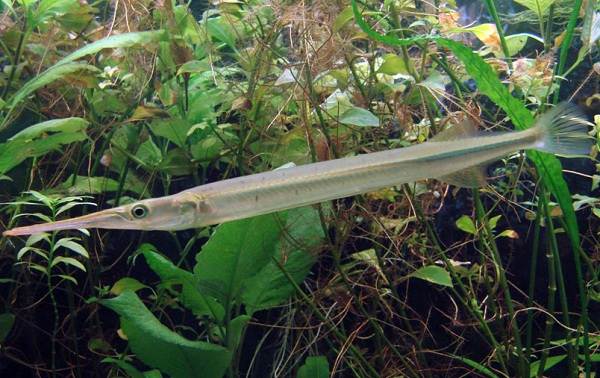 Fishes arrows are born of one and a half centimeters and have short jaws. The nose in process of growth of an animal is extended. In the conditions of an aquarium of a sargana live to the 4-ekh of years. Respectively, it is a century of fresh-water arrows. In habitat they live up to the 7, starting throwing caviar before sea types. Those live till 13 years.