Description and features of the skink

Skinks or skinks (Latin Scincidae) is a smooth scaly reptile from the lizard family . This family is very extensive and includes more than 1,500 species, which are combined into 130 genera.Lizard skink

In size, most skinks in body length from 10 to 15 centimeters. They have an elongated body, similar to a snake, with small, or rather very small, legs.

The exception is the long-legged skink , its paws are quite powerful and elongated, with elongated toes at the ends. Also, there are a number of lizard species that have lost their fore and hind limbs in their evolution, for example, some subspecies of the Australian skinks do not have any legs on their bodies. 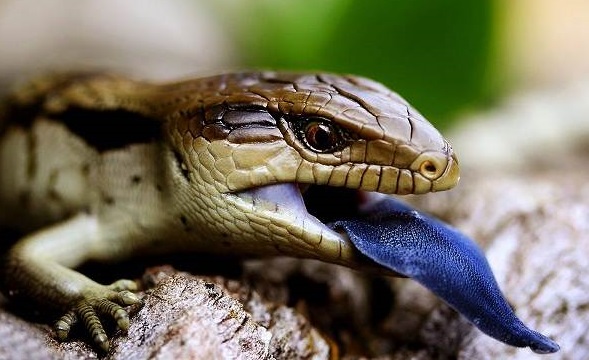 On the photo is a blue-tongued skink.

The body, the main species of skink lizards, is covered from the back and from the belly with smooth scales, like fish, thus forming a kind of protective shell. Some species, such as the New Guinean crocodile skink , are covered with a kind of armor in the form of scales with small spikes, prickles.

Many species of skinks have a long tail, with the exception of the short-tailed skink , which has a short tail. The main function of the tail of most reptiles is the accumulation of fat reserves. In some tree lizards, the tail is tenacious and is used to ease the movement of the animal along branches.

In some genera, the tail is brittle and when a danger is detected, the reptile drops it, thereby giving itself a head start in order to leave the dangerous terrain, and the discarded tail twitches for a while, creating the illusion of a living creature for the hunter. 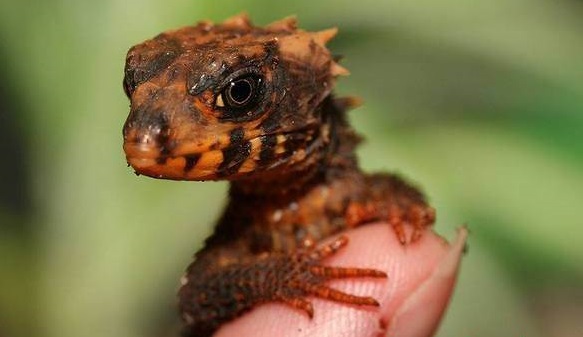 In the photo the New Guinean crocodile skink

The genus of lizards of the family of skinks has a sharp-nosed head with round eyes and moving separate eyelids. The eyes are protected by temporal arcs that stand out on the skull.

The color coloring of most species of these reptiles is not distinguished by its colorfulness, it is mainly dominated by gray-yellow, greenish-dirty, marsh tones. There are, of course, species that have a bright color, for example, the fiery skink on the sides of its body wears bright red pigmentation.

The habitat of the family of skinks is the whole world with the exception of the Far North and Antarctica. Most species live in deserts, tropical and subtropical regions.

These lizards live , both on the ground in burrows and crevices, and in trees. They like a humid warm climate, and some species are near-water, but the moorland is unacceptable for living.

In general, skinks are day-lizards and can often be seen basking in the sun on stones or tree branches. For our country, the Far East skink is the most famous species of lizard .

It inhabits the Kuril and Japanese islands. The species is rather rare and therefore is listed in the Red Book. The habitat of his residence are the stones of the sea coast and the outskirts of the coniferous forest. 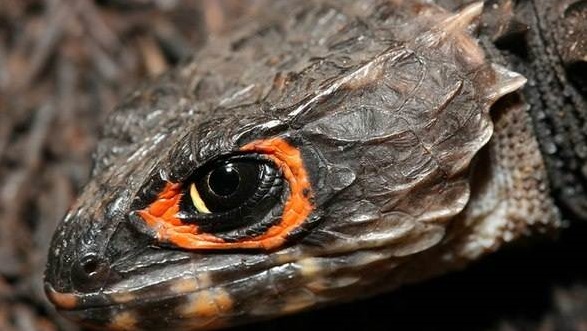 On the photo crocodile skink

Special organizations controlled by the state are engaged in breeding and keeping skinks of this species in terrariums. Their importance for our country is so great that in 1998 the Bank of Russia issued a silver investment coin of one ruble denomination depicting Far Eastern skinks .

The diet of the skink reptiles is very diverse. Most species eat various insects and some vegetation. Also, many can eat small vertebrates, including similar lizards . For example, the diet of the blue-tongued skink can be roughly divided into 25% of animal feed and 75% of vegetable.

And at home, this species with great pleasure eats meat, heart and liver of beef, which in the wild it will never meet. And from plant foods do not mind to eat carrots, cabbage, tomatoes and cucumbers.

At the same time, in the natural environment, the blue-tongued skink feeds mainly on vegetation and insects in the form of snails, cockroaches, ants, spiders, and only large individuals hunt small rodents and lizards. 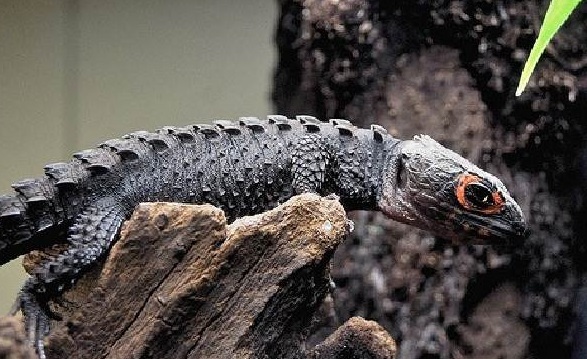 On the photo crocodile skink in wildlife

There are species that practically do not use plants, but prefer insects and small vertebrates, one of such representatives is the New Guinean skink . Adults of skinks eat no more than once or twice a week, the young need more energy to grow their energy and their food happens every day.

Under the conditions of the terrarium one should watch the nutrition of the reptile very carefully, because the skinks cannot restrict themselves in eating and will eat everything they get, often suffering from overweight.

Reproduction and life expectancy of the skink

In general, skinks are oviparous reptiles, but there are species that produce egg-live birth and even live birth. Sexual maturity in most of these reptiles occurs between three and four years of age. 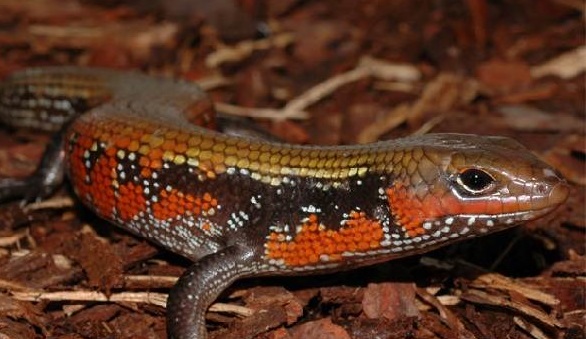 Oviparous females lay their eggs in the ground. Some species protect their offspring. For example, the female crocodile skink protects the laid out egg all the incubation time, and if it is in danger, it quickly transfers it to another place.

The number of eggs in a clutch in various species can vary from one to three. The hatching period lasts on average from 50 to 100 days. Most species easily breed in captivity, including at home. The average lifespan of a skink is 8-15 years.

At present, it has become very exclusive and fashionable to keep a reptile in a home terrarium. Do not become an exception and skinks. Buy a skink in our time is very simple, in most pet shops represented a lot of copies. The price of a skink depends largely on its type, size and age.

On average, the most common types are sold in the region of 2,000 — 5,000 rubles. For example, a medium-sized representative of such a wonderful and beautiful look like a skink of a fiery fernan can be purchased for 2.5-3.5 thousand rubles. If you decide to start a domestic reptile, then for choosing a specific species you will be helped by many photos of skinks posted on the World Wide Web.