Содержание скрыть
1 Features and habitat of scorpion
2 Character and lifestyle of the scorpion
3 Meals of scorpion
4 Reproduction and life expectancy of scorpion
5 What should I do if I bite a scorpion?

Scorpio is a very interesting and unusual creature, which conducts exclusively a terrestrial way of life in areas with a hot climate. Many people often have questions about him: a scorpion is an insect or an animal, where it lives, what it feeds and how it multiplies. We will answer them in our article.

Features and habitat of scorpion

Scorpio belongs to the animals of the detachment of arthropods and the class of arachnids. It is distinguished by its rather frightening appearance and speed of movement, and females and males are similar in appearance.

In describing the appearance of the scorpion, it should be noted that his body consists of a cephalothorax and an elongated segmented abdomen. The cephalothorax has a trapezoidal shape, on which there are claws of impressive size, serving to grasp the prey.

Also in the lower part of this part of the body (in the mouth area) is a pair of tentacles that have become rudimentary, fulfilling the function of the jaw organs — they are chewing. The abdomen, in turn, contains outgrowths and four pairs of legs. 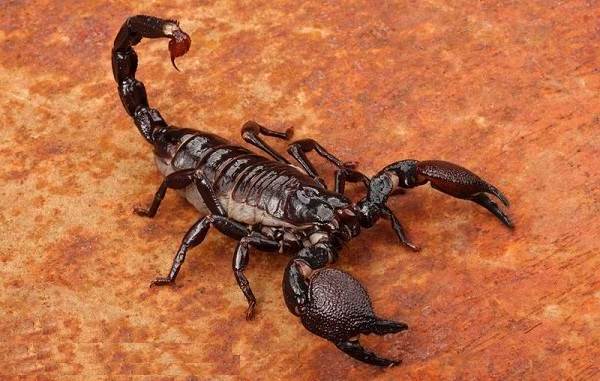 These outgrowths, with the help of the hairs on them, are organs of touch. Hairs are captured by various vibrations that provide the animal with information about the terrain or approaching the victim.

The limbs are attached to the bottom of the abdomen and allow the creature to develop a very large speed when moving through areas with obstacles, in the form of quicksand in the desert or rocks in the mountains.

The last segment of this part of the body of the scorpion ends in a relatively small joint-shaped capsule, which has the shape of a pear containing the glands that produce the poison. At the end of this capsule is a sharp needle, by means of which this creature injects poison into the body of the victim. 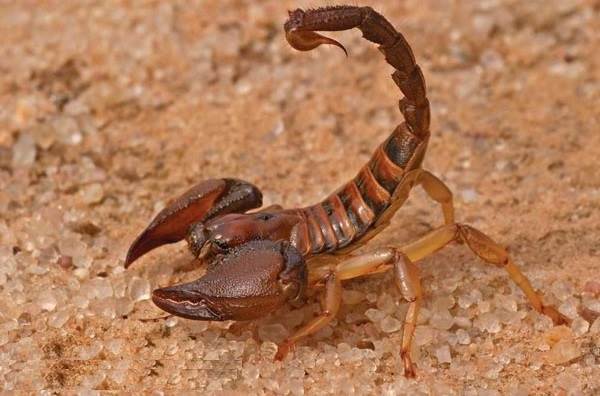 The body of the scorpion is covered with a very strong chitinous shell, so it has almost no enemies capable of harming it. In addition, it contains a substance that can shine when exposed to ultraviolet rays.

Depending on the habitat, these creatures have a different coloration of the chitinous cover. So, there are sandy-yellow, brown, black, gray, violet, orange, green and even colorless scorpions.

The creature is distinguished by rather poor eyesight, although it has many eyes. So, in the upper part of the cephalothorax there are 2-8 organs of vision, two of them larger and called the middle ones.

The rest are located along the sides of the anterior edge of this part of the body and are called lateral. The lack of vision is completely compensated by the touch, which is very sharp. 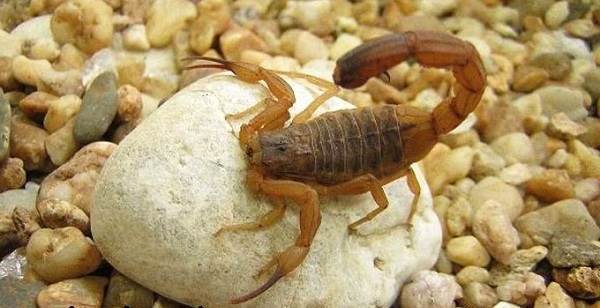 In nature, there are several types of scorpions, which differ in their size, color, habitat and longevity. They are imperial, arboreal, deserted hairy, black and yellow thick-tailed and striped.

The habitat of the scorpion is very wide, it is possible to meet it on almost all parts of the land except for some areas of the Arctic, Antarctica and New Zealand islands, however, it prefers warm, arid regions, therefore it is often called scorpion desert animals.

Character and lifestyle of the scorpion

Since this animal lives in arid zones, it is distinguished by its endurance to environmental conditions. He very easily tolerates heat, cold, hunger and even radiation. 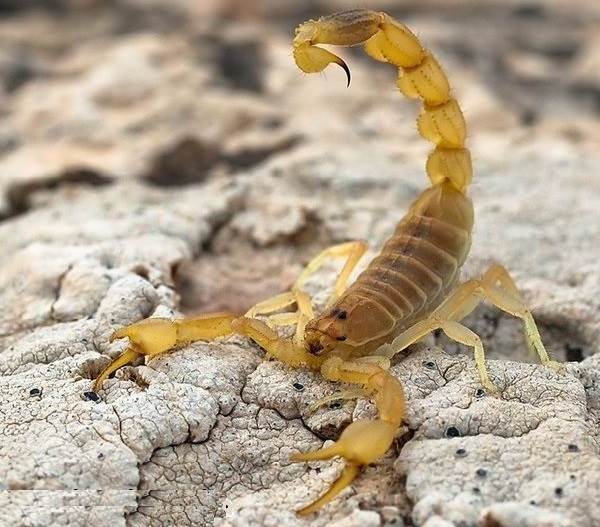 To reduce body temperature depending on the terrain, it buries into the ground or hides in the stones or is cooled by an interesting way, consisting in taking it upright, which is characterized by the fact that it straightens the legs to exclude the contact of the trunk with the ground. This position allows free circulation of air, which on all sides cools the body of the creature.

Important for life in such zones is the ability of the scorpion to dispense with liquid for several months. He easily replenishes her defect with the help of her victims. However, when the opportunity arises, he likes to drink water and bathe in the dew.

Also, thanks to the special structure of the digestive system, the scorpion does not need regular nutrition. Although the scorpion is a rather dangerous animal, however, it is peaceful. At approach of the person the being prefers to take refuge in nearby shelters, attacks only in extreme cases. 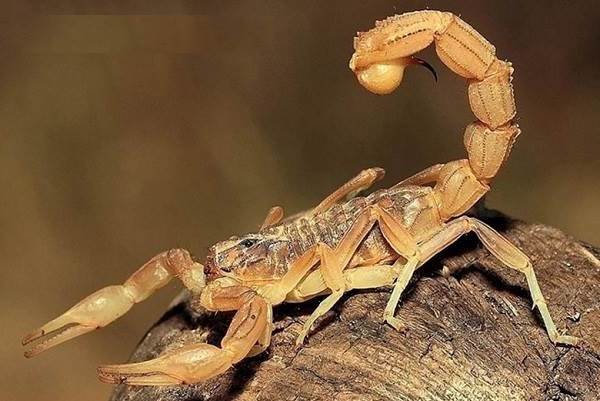 Hunts the creature at night, learning about the approach of prey to the vibration caught by the hairs. Preparing for the attack, he takes a threatening pose, characterized by bending the tail and waving it in different directions. Scorpio basically leads a single way of life, very rarely when they gather in groups, so he finds his pair by a fluke.

What animal scorpion on the principle of nutrition? Scorpio is a predator. Its main food is insects (spiders, centipedes, grasshoppers, cockroaches), however, it does not disdain small rodents, lizards and mice, cases of cannibalism in which the weaker relatives are eaten are not rare.

During the hunt, the creature grabs the prey with the help of a claw and pricks with a poisonous sting, first paralyzes it, and then kills. As stated earlier, the creature does not eat every day. 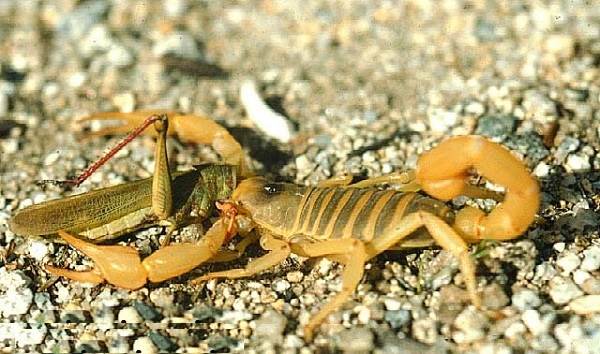 Reproduction and life expectancy of scorpion

Finding a female, the male does not immediately mate with it. The couple pre-marries, accompanied by scorpions of «wedding» dance, the duration of which takes hours. In time, the male, holding the female with a claw, moves it back and forth over the soil moistened with his sperm and periodically lowers it.

After mating, in which the female often eats a male, she has a pregnancy, which lasts 10-12 months. Since the scorpion is an animal viviparous, this act of cannibalism provides a large number of nutrients necessary for obtaining a strong offspring.

After this period, the cubs appear, the number of which varies from 20 to 40, depending on the variety. The first two weeks the kids do not have a chitinous shell, so all the time the females are on their back, tightly clinging to each other. 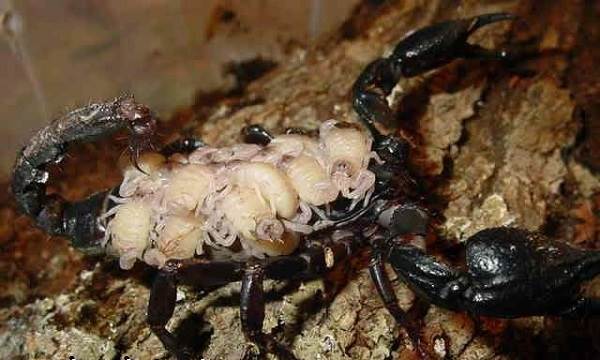 On the photo a scorpion with cubs on the back

As soon as the shell is formed, the cubs leave the mother and scatter around the nearby territory for independent existence. Until the adult, they grow only after a seven-fold molt. Scorpio is characterized by a fairly long period of life, which in natural conditions can reach 7-13 years, however, in captivity, which they do not tolerate, it is significantly reduced.

What should I do if I bite a scorpion?

For a person, the bite of a scorpion in most cases is not fatal, it mainly causes discomfort accompanied by such manifestations as severe pain, swelling and redness of the skin around the wound. However, the poison of some species of these animals can lead to death.

Since not every one of us can find out which scorpion has bitten-dangerous or not dangerous, it is necessary to immediately provide first aid. To do this, try squeezing or sucking out the poison.

Carry out treatment of the wound with antiseptic drugs, apply cold or apply a tight bandage, capable of slowing the spread of poison. Apply antiallergic drugs. After rendering first aid, it is necessary to deliver the victim to the hospital.

Despite the fact that the scorpion is quite dangerous, it has been of interest to people since ancient times. Nowadays it is increasingly possible to see it in people’s homes, and it is also the main attribute in magic and witchcraft.