Description and features of sea cucumber

Sea cucumbers, which are also called holotourias, sea cups are inhabitants of the deep sea, resembling earthworms or caterpillars. They are able to shrink strongly even with a slight touch, so they are sometimes associated with egg-pieces. 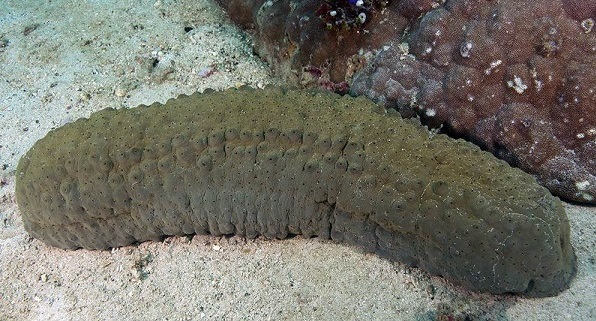 Sea cucumber is an echinoderm invertebrate mollusk numbering over a thousand species. The varieties of these marine creatures differ in size, tentacles, and the structure of some organs.

They have a wrinkled, leathery body resembling a cucumber due to its oval shape. On thick skin visible growths resembling thorns. On one side of his torso there is a mouth surrounded by tentacles, on the other — anus. Sea cucumbers can be very different colors — black, brown, green, gray, red.

Sea cucumbers also differ in size — some species are similar to dwarfs and reach values ​​from a few millimeters to a few centimeters, other species can reach up to two or even five meters in length. At such giants, the miners hunt with particular enthusiasm. Closest to sea cucumbers are sea urchins and sea stars. 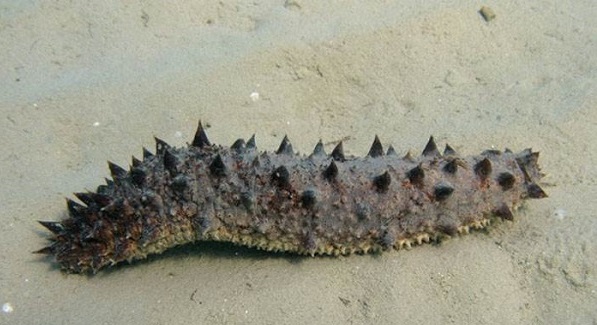 In the photo sea cucumber

The most ancient sea cucumbers were already known in the Silurian period, the very name “sea cucumber” belongs to the Roman philosopher Pliny, and Aristotle created the first descriptions of some species.

About one hundred species of these mollusks live in Russia, the most popular is the Japanese variety of sea cucumber — cucumaria. This type of sea cucumber is distinguished by its beneficial composition and excellent taste, and is often used in cooking. Trepangs are called sea cucumber species that can be eaten.

Sea cucumbers are found in different parts of the ocean, and in shallow waters off the coast, in deep-sea depressions, and in coral reefs, in tropical latitudes. They are common in the deep sea around the world. 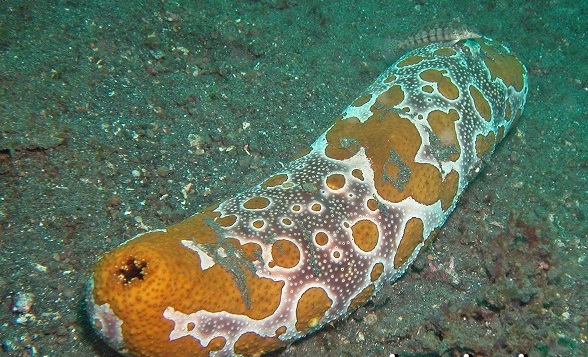 The holothurians are slow and lazy, they crawl along the bottom, and this makes them easy prey for hunters. Most of the time they lie on the bottom, «on the side.» Deep-water species may have elongated ambulacral legs, which serve as stilt animals and help move along the bottom and rocks.

The echinoderms musculature is developed enough to move along the bottom and contract sharply in case of danger. Some species can attach to rocks or bury themselves in silt. The holothurians themselves can become prey of starfish, fish, crustaceans or gastropods.

Like lizards, in the event of an attack or other danger holothurians «explode» — scatter their body into parts. While the enemy chooses a piece more tasty, at this time the front part of the cucumber is saved.

In case of danger, the sea cucumber can fold back part of the intestine for a diversion.

The body of echinoderm mollusks is subsequently rapidly regenerated. Sea cucumbers are animals that can be regenerated, if half of the body is preserved, they can recover even from a quarter of their body. The regeneration process can take from one and a half to five weeks.

All kinds of sea cucumbers have special tentacles placed around the mouth. The number of tentacles can vary from 8 to 30.

Tentacles are usually short, designed to collect nutrients from the ground surface. Holothurians also have branched tentacles capable of covering a large body of water in order to catch prey. 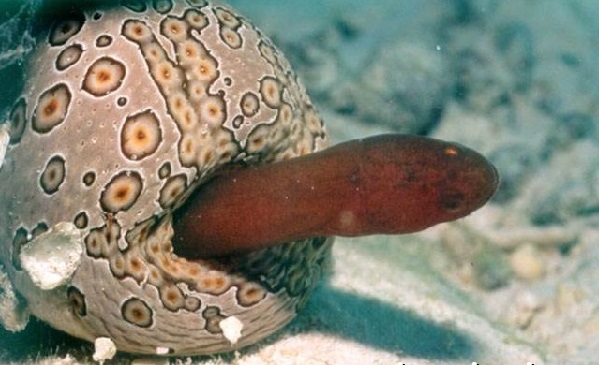 Their diet is plankton, plants, small animals and organic debris that can be extracted from bottom sand or silt. They are sometimes called marine nurses because they clean the bottom surface of the remains of dead animals, using these organic substances as a nutrient.

Features of the nutrient system of sea cucumbers carefully investigated by American scientists. They found that the feeding of sea cucumbers occurs predominantly through the mouth, but the anus, which in these protozoa of invertebrates also participates in the respiratory system, can also perform food capture. The respiratory functions of these invertebrates are also carried out by the water lungs. 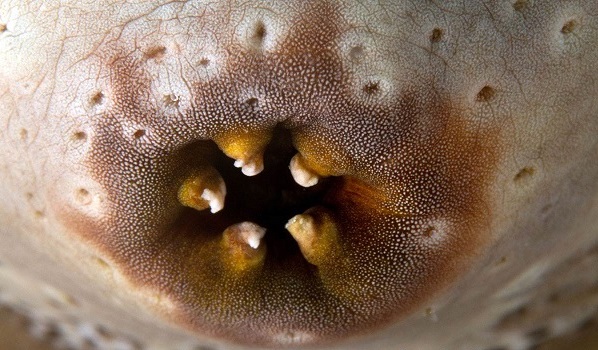 In Russia, cucumaria and other types of sea cucumbers are common on Sakhalin, in Primorye, as well as in the seas — Okhotsk, Japan and Barents, at a depth of half a meter to one hundred meters.

Holothurians are hermaphroditic, they produce male and female germ cells alternately, sometimes even simultaneously. They breed by spawning, they have eggs of bright green color, the larvae that are able to swim are hatching from eggs.

Spawning occurs more often in the evening or at night; perhaps darkness matters. Kukumaria spawns twice, in May and July. The holothurians living in the Atlantic Ocean spawn off the coast of Sweden in the autumn from October to December. Some species can spawn all year round. The larvae swim in plankton for about two weeks, then sink to the bottom. 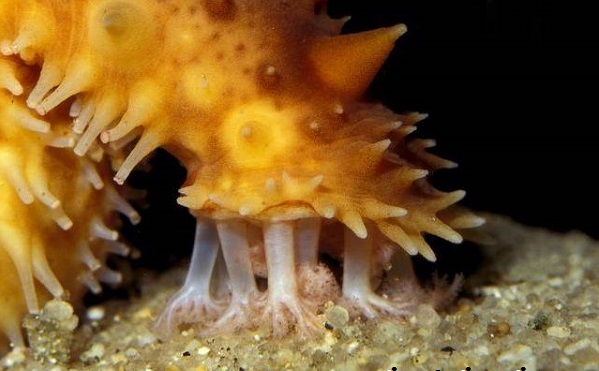 About 30 species of sea cucumbers have sexual identity and are divided into male and female individuals. They take care of the young and bear the young on the surface of the mother’s body.

Rare cases of reproduction by division are also recorded and described by scientists: half of the body is able to recover to full volume. Holothurians live long enough, from five to ten years.

Due to the great popularity of cucumaria and its demand as a culinary product, as well as in pharmacology, artificial cultivation of sea cucumbers is practiced, including in Russia, in the Far East. 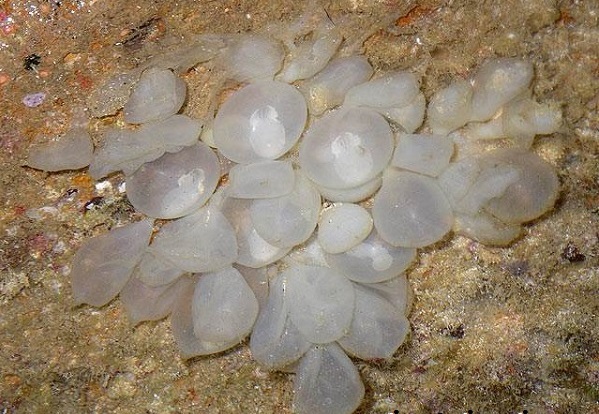 Ancient Oriental medicine knew about the beneficial properties of sea cucumber, it has long been called sea ginseng. Cucucary meat is almost sterile, not exposed to viruses and bacteria, these mollusks are extremely rich in nutrients, trace elements, especially iodine, as well as fluorine, calcium, amino acids and others.

Sea cucumbers are very low-calorie, so their products from them can form the basis of a diet for those who want to lose weight. This product is used as a healing agent, stimulating the body’s defenses, for people suffering from increased fatigue, loss of strength. Sea cucumbers help a person quickly recuperate after surgery or a long illness. 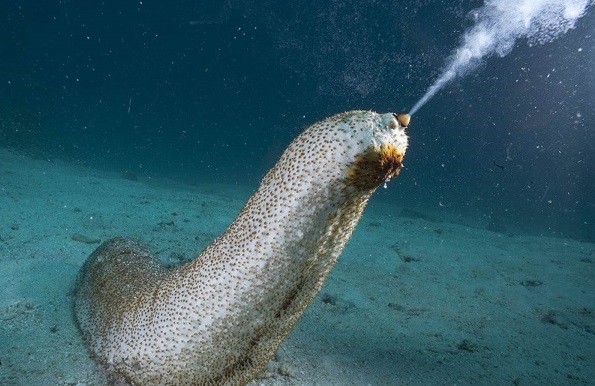 Sea cucumbers have a healing effect on the joints, helps with arthritis. Dietary supplements and pharmacology products are also produced from sea cucumbers.

Sea cucumber can be bought not only for the sake of useful and medicinal properties — delicious dishes are prepared from them. Sea cucumbers make excellent salads, invertebrate mollusks, after cleaning, frying and stewing, as well as canned. Some types of sea cucumber are considered delicacies and attract much attention of gourmets.