How much more there is to us hitherto incognizant of animals, fish, shellfish, crayfish, crabs in the sea. They can study and describe an infinite amount of time. Scientists oceanographers do not cease to be amazed at their new discoveries.

Some of the inhabitants living directly in the eyes, even under his feet. Hunt, feed, breed. And there are types that go far in the depths where no light and seemingly no life. Incredible creation with which we are acquainted – the sea cucumber, he is goloturiya, he’s a sea cucumber. Looks similar to very lazy, overfed, the huge size of the worm. 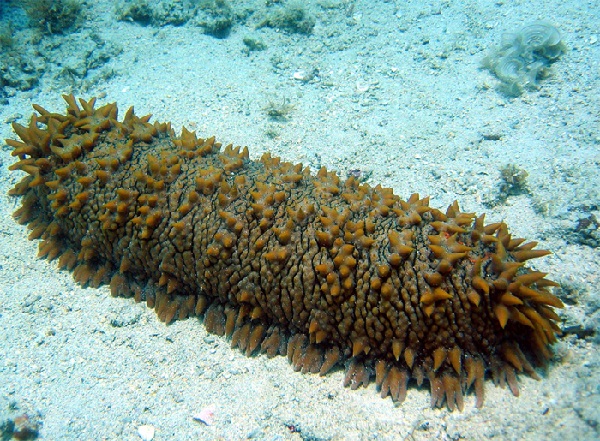 This creature, living for many millions of years in the water expanse and survived more than one historical period. Its name – the sea cucumber, he received from the philosopher of Rome, Pliny. And, for the first time several of its species already described by Aristotle.

Meat of sea cucumber benefits for health, so it is very popular in cooking, that even have to breed them in pools. Cook them deep fried, dried, canned, frozen. Pickled and added to salads. When cooking meat, sea cucumbers, chefs, add a lot of spices, it has the property of maximally absorb all the smells and tastes.

Interestingly, the nutritional value of meat during heat treatment does not deteriorate. The Japanese eat sea cucumber — cucumaria, solely in its raw form, pre-primarynav five minutes in soy sauce with garlic. 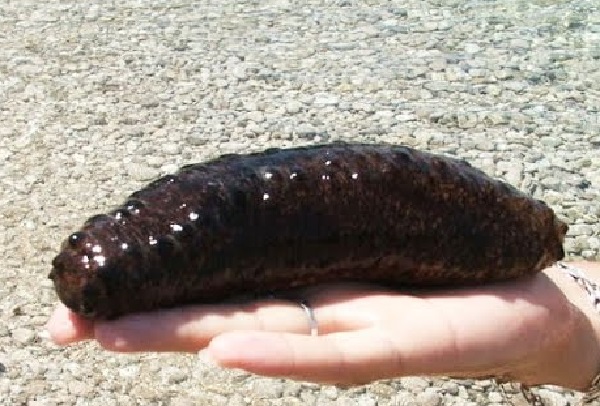 Considering the flesh of the sea cucumber, a panacea for all diseases. Sea cucumbers are filled with macro and micronutrients, vitamins, minerals and amino acids. More than thirty chemical elements from the table Mendeleeva.

Its meat contains the highest levels of beneficial components like no other inhabitant of the deep sea, and it’s completely disinfected, viruses, bacteria and microbes he was not familiar with.

Also, in the sixteenth century, we got more information about the unique healing properties of sea cucumber. Now it is used in the pharmaceutical industry. In medical applications, especially in Japan and China. 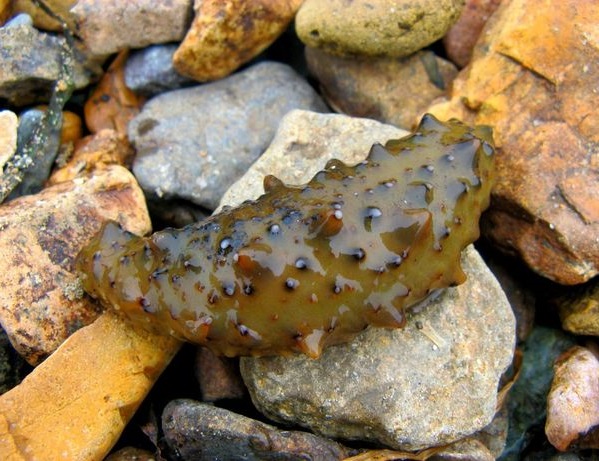 The inhabitants of these countries call the sea cucumber – the ginseng extracted from the sea. It is a natural component to a complete restoration of the human body after a serious illness, complex surgery.

Helps the regeneration of human tissue. Improves heart function, normalizes blood pressure. Stimulates the gastro-intestinal tract. Also the sea cucumber has certain components that help in the treatment of joints. People to lay his age, doctors recommend eating the extract of the sea cucumber as a dietary supplements, to improve the condition, podlivaya life. 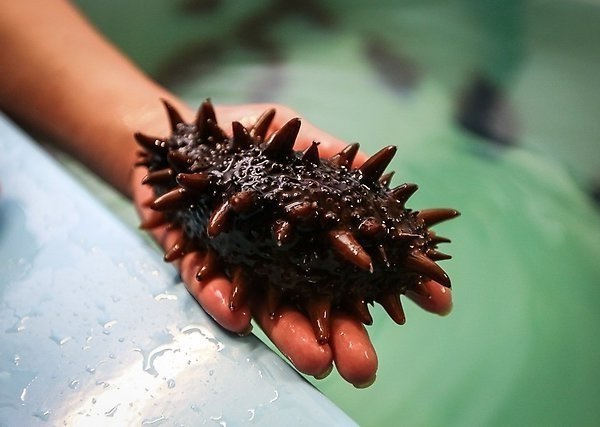 Even, unbelievable but true, this animal has the ability to regenerate. This kind of Phoenix bird, only the sea. Even if it remains less than half of the body, after a while, it will be a full animal. But this recovery could take some time, up to half a year or more.

Description and features of sea cucumber

Who is this, the sea cucumber? This echinoderms, invertebrate mollusk, found only in marine waters. His closest relatives of starfish and sea hedgehog.

His appearance, he is a natural caterpillar, the silkworm, and volegno slowly creeping along the bottom of the sea. The swamp is dark brown, almost black, sometimes scarlet. Depending on where they live, their colors change.

For example, on the river, the sandy bottom can be found a blue sea cucumber. The body size is different. Some types are half an inch long. And there are fifty centimeter specimens. The average size of the clam as a matchbox – five, six centimeters in width, and in length up to twenty cm it Weighs almost one kilo. 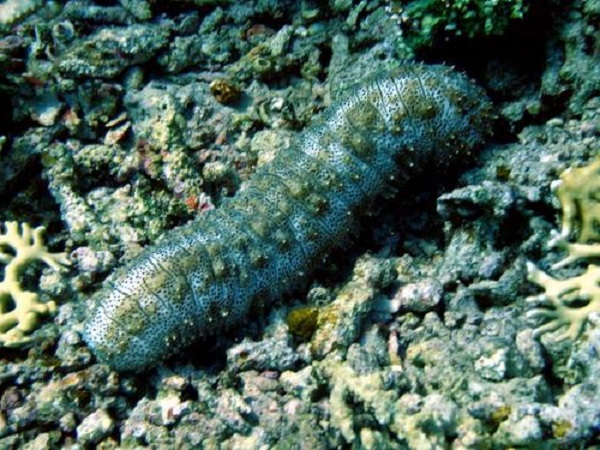 In a wakeful, relaxed state, the sea cucumber is almost always lying on its side. On his lower body, called the belly, is the mouth, around the entire circumference studded with suction cups. With them the animal eats.

How would pylesos from the bottom of all, what can be salvaged. These suckers can be up to thirty pieces. All the skin of the sea cucumber tightly covered with limescale. On the back is a dimpled education with young bright shipikami. They have legs that grow along the entire length of the body rows. 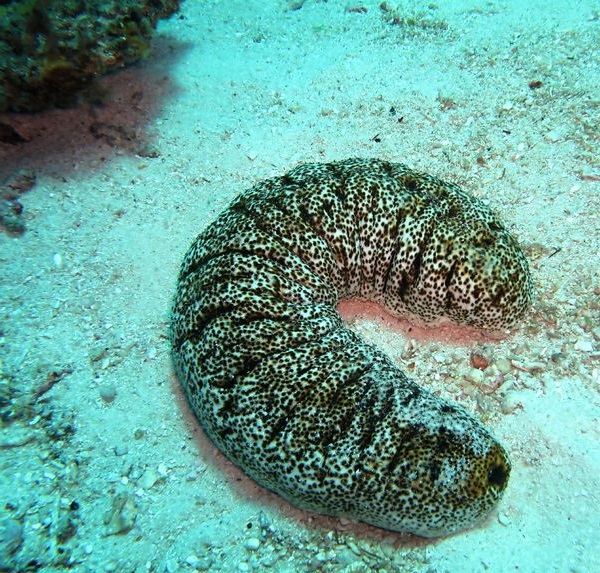 The body of the sea cucumber has another unique ability to change his density. It becomes hard as a rock, just in case she feels threatened for life. And can be very flexible if he needs to crawl under some rock for shelter.

A sea cucumber called a sea cucumber that live on the Northern part of the Kuril Islands Central areas in China and Japan, South Sakhalin. In Russia there are over a hundred varieties. Sea cucumber – animals living at a depth of no more than twenty meters. All the time they lie on the bottom. They very little exercise.

Sea cucumbers live only in salt water. Fresh water is fatal to them. They like the quiet water and muddy bottom. In the event of danger, it was possible to dig. Or to cling to a rock. When pokojowo attack the enemy, the fleeing animal can be separated into several parts. Over time, these parts, of course, will be restored. 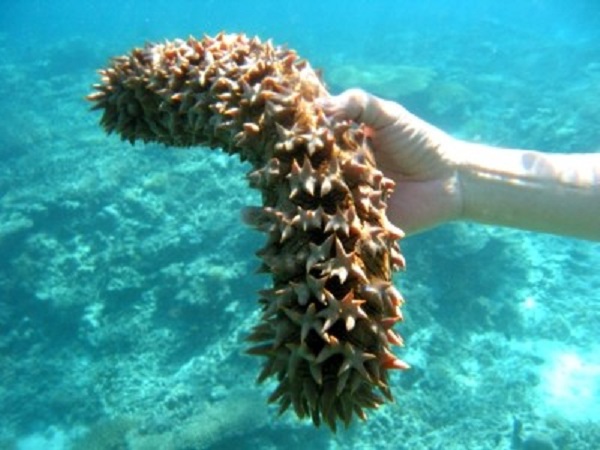 As no lung in these animals, they breathe through the anus. Pumping in water, filtering out the oxygen. Some instances can pump through up to seven hundred liters of water for one hour. Also, sea cucumbers use the anus as a second mouth.

To temperature they are comfortable and minor drawbacks do not affect their livelihoods. To high temperatures in the reservoirs, they also have a positive attitude.

Even if, some shellfish will freeze in the ice, and gradually warm up, he is gone, and will continue to live. These animals live in large flocks, forming at the bottom of the entire fabric of individuals.

Sea cucumbers belong to the animals which collect and eat all the decaying carcasses at the bottom. Sea cucumber in the hunt for plankton along the way takes all out of the way the silt and sand. Then pass it all through. Therefore, its insides consists of half of the soil. 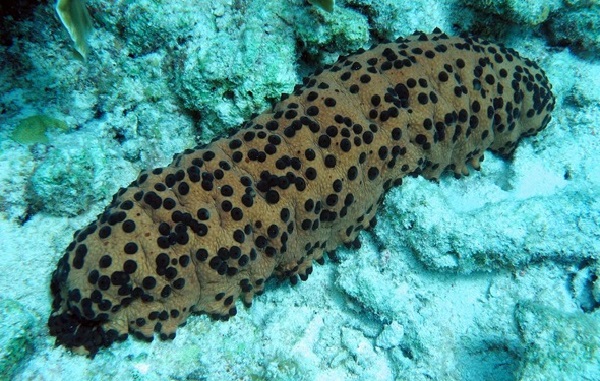 The sea cucumbers are sensory receptors, which they use to accurately determine the amount of food located on the bottom of the sea. And if the prey hidden in the sand, the sea cucumber will feel it and will burrow into the ground until they catch food. And when he feels that he feeds a little, then quickly ran on top, collects dead remains.

The reproduction and lifespan of a sea cucumber

By the third year of life, the sea cucumbers are already Mature and ready to breed. By their appearance it is difficult to understand who is male and who is female. But they are opposite-sex animals.

The mating period occurs from late spring and last all summer. But there are also species in which the spawning period may occur at any time of the year. In pairs, clams out close to the shore on the hill, Tolley crawl on the rocks, or lying on mussels. 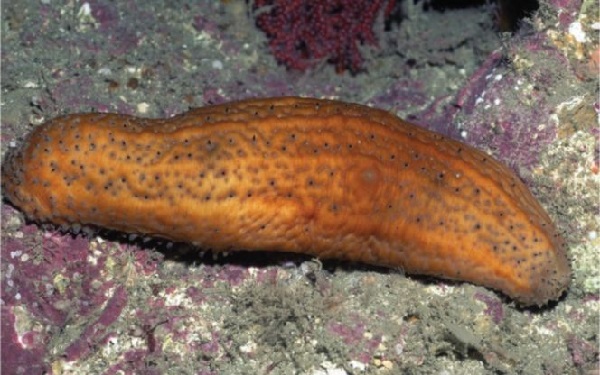 When mating has occurred, the back feet suction cups, they are attached to some surface, and lift up your head. In such a bent position begin to spawn. This procedure last up to three days. And remarkably, in the dark. In one year, holothuria female can lay more than fifty million eggs. These individuals are very prolific.

At the end, exhausted animals crawl into their chosen shelter, and almost two months hibernate. Slept and rested, the sea cucumber appears appetite and they start eating everything. On the third week of life, young fish around the mouth opening appears like suckers. With their help, they attach themselves to marine vegetation and then it grow and develop.

And many species of sea cucumbers – the females are carrying babies on your back, throwing them to his tail. Even the young begin to grow pimples on my back and on the belly, tiny legs. 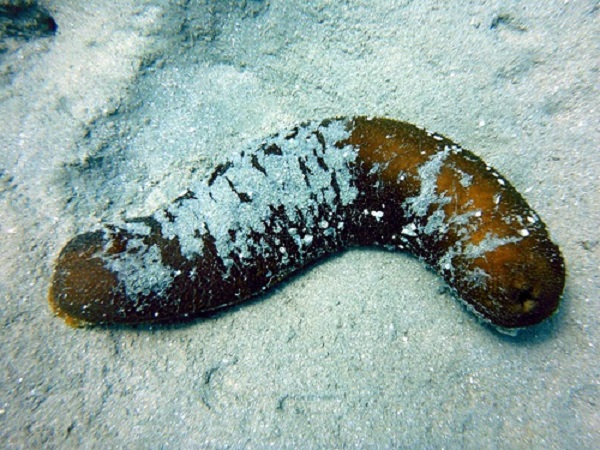 Fry grows up, his body increases, the number of legs added. He has become like his parents, a worm. In the first year they get a little size to five inches. By the end of the second year grow twice the size and already look like a young adult. Live sea cucumbers eight, ten years.

Currently, the sea cucumber you can buy without any problems. There are whole farms-aquariums in their farming. Expensive fish restaurants, all parties are ordered to their cuisine. And digging online, you can buy what you want.