Description and features of the sea lion

The white-footed animal, the sea ​​lion, is considered to be a close relative of the fur seal and belongs to the family of eared seals . Streamlined, bulky, but flexible and slim, in comparison with other types of seals, the body of this mammal is able to reach a length of two meters or more. 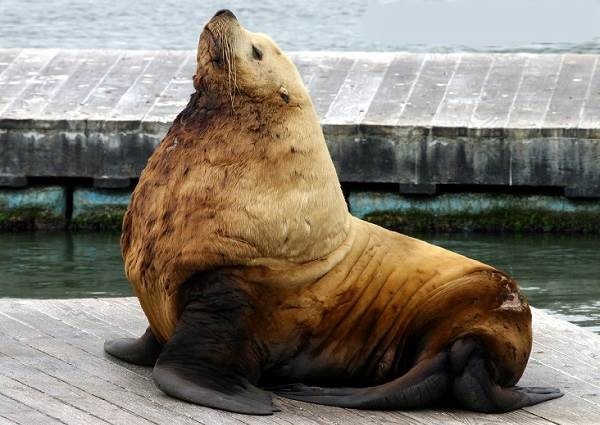 Such a figure eloquently testifies to the impressive size of the sea lion . As for weight, males are especially massive, impressing with three hundred kilograms of living flesh. True, sea lionesses come in three times smaller representatives of the male half.

The usual color of the animals is dark or black-brown. As you can see in the photo of a sea lion , the head of these water creatures is small; muzzle, like a dog, elongated, with a thick mustache, called vibrissae.

The eyes of the animal are slightly bulging, of large size. Male individuals that have reached maturity, allocates a significantly developed cranial crest, externally having the appearance of a large tuft. In addition, the males are decorated with a short mane, formed on the neck more overgrown than that of females, with wool.

The description of a sea lion cannot be considered complete without the last of the mentioned signs, since it was he who became the pretext for the name of this beast, which is very apt in essence, considering that the lions of the sea make sounds resembling a hoarse growl, but in their voices there is a little less roar than seals.

The neck of animals is flexible and rather long. Their finite flattened limbs with movable paws make it possible to move fairly quickly over land, which distinguishes them from clumsy seals .

However, the hair of sea lions does not admire with special density, besides, it is rather short, therefore it is considered inferior in quality and valued less than among relatives in the family. 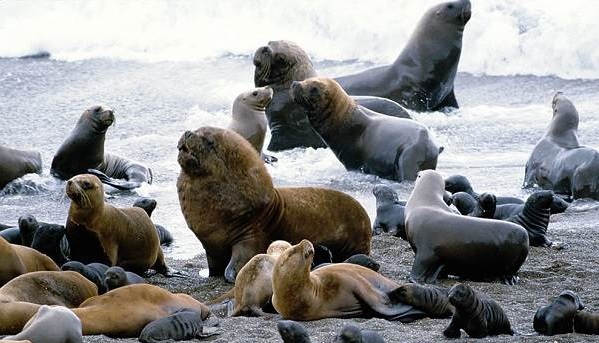 Biologists distinguish five species of such animals. One of them is the northern sea lion , also called the sea lion. This beast is decorated with a golden mane and a massive withers. The weight of males of this variety reaches 350 kg.

Stelled campsites spread throughout almost the entire coast of the Pacific Ocean and nearby islands. They are found in the waters of the Far East, Japan, the USA and Canada. Speaking about this species, it is important to mention that sea ​​lions are considered rare and in need of protection.

The southern sea lion is a frequenter of the shores and ocean waters of the New World, located on the other side of the equator. This species is interesting with an impressive difference in the size of pinnipeds of lions and lionesses.

Male specimens sometimes have a length of about three meters, and their girlfriends are much smaller. Representatives of the species have a light brown color and do not have a mane. 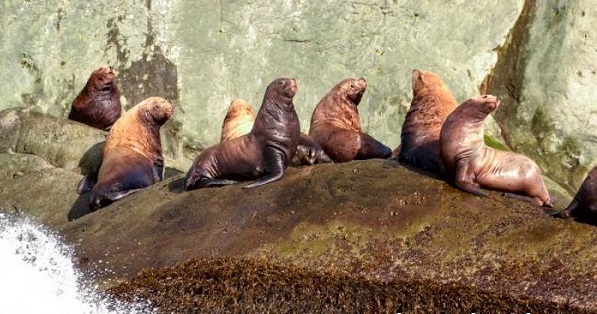 The inhabitants of the northern waters of the Pacific are representatives of the Californian variety. Such creatures are distinguished by a particularly outstanding intelligence and are easy to train.

The indigenous people of the New World from time immemorial hunted these animals, flattered by their meat, fat and skins. And with the arrival of the Europeans on the continent, mass trade soon began, which made the situation of animals worse. But at present there are strict limitations on the capture and hunting of these representatives of the fauna.

Individuals of the Australian variety, depending on gender, differ greatly in body color. Males are distinguished by a dark brown shade, and females are lighter, and often can even boast a silver-gray coat color. Another variety of these animals is in urgent need of protection. Scientists believe that the once New Zealand sea lions were found in nature more often than now.

But becoming the victim of industrial development in the century before last, their population has undergone significant reductions. And in some places of the former habitat, for example, on the Auckland Islands, this species was completely exterminated. 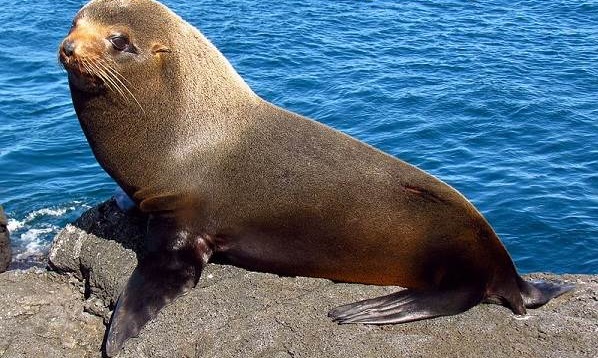 All types of described pinnipeds are distinguished by impressive mental abilities, as evidenced by their very developed, certain parts of the brain. Animals are quite mobile in the water, which is the main habitat of sea lions , where they are able to show the real wonders of acrobatics.

These are, for the most part, the inhabitants of the southern hemisphere, found on the open coasts at the foot of the oceans and seas, on sandy and rocky beaches, in thickets of seaweed.

Spending their lives in warm water, they do not need significant reserves of fat, so they almost have no fat layer. This circumstance, as well as the low quality of their wool, made the trade on the beast economically unprofitable, which saved them from mass destruction.

However, many species of sea lions, as already mentioned, still need special protection. These also include, besides those already listed, and one of the Californian subspecies is the Galapagos Sea Lion . 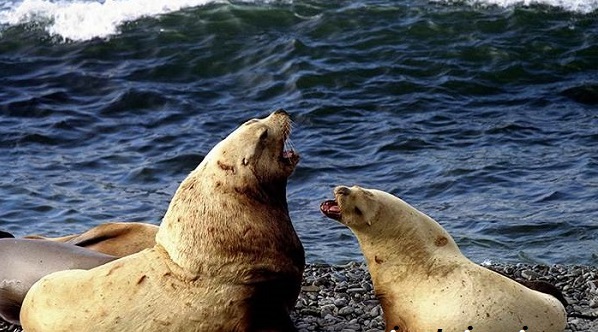 The mode of existence of such creatures is gregarious, and the accumulations of animals in the natural environment are extremely numerous. On land, they spend a lot of time, but it happens that they go out into the open ocean.

During swimming, their front legs move quite actively. Rowing in this way, animals move in the ocean’s water space. Usually they wander over distances not exceeding 25 km, and do not make seasonal migrations.

The enemies of animals in nature are killer whales and sharks , to which they are regularly attacked. Curious information about sea ​​lions and evidence of their highly developed intelligence are some facts about the treatment of these fauna for protection from predator attacks on people who are sailing past ships and yachts.

The described marine animals are able to dive to a depth of one hundred meters or more, jumping down from a twenty-meter height. Moving in such conditions with extreme lightness and beauty of bird flight in the sky, they hunt fish and crustaceans, eat mollusks, often raid their prey together. This is especially useful when large schools of fish appear. 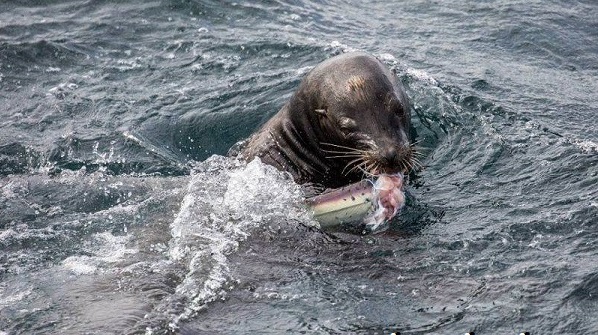 The above testifies that the sea ​​lion feeds on what sends it to the sea abyss, but its diet should be described more fully depending on its habitat.

To this should be added cephalopods of mollusks and octopuses , in some cases they feed on algae and even sharks. And male southern sea lions eat not only octopuses and squids, but also hunt penguins. Often they take away part of the catch of fishermen, spoiling their nets.

Reproduction and lifespan of a sea lion

In the mating season, which occurs once a year on the shore in rookeries, sea lions behave much calmer than, for example, fur seals or elephants. Occupying a certain area and protecting its borders from strangers’ encroachments, the male sea lion at least often enters fights with rival relatives, defending their rights to the harem, sometimes consisting of a dozen, and often more, females, but fierce bloody battles are usually can not be. 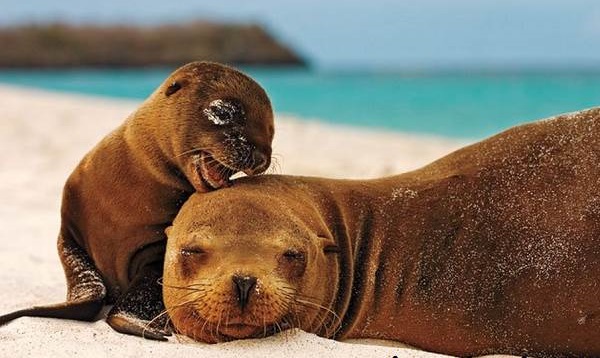 In the photo the sea lion with cub

True, exceptions from this rule occur. For example, young males of southern sea lions at the time when they become adults, in search of girlfriends patrol the harems of the older generation. As a result of such attacks, very fierce skirmishes often occur, and the losers receive bloody deep wounds.

In a harem, individuals not participating in breeding usually stay on the edges of the site, taking a separate place in the rookery. A female sea lion after mating, hatching their young as much as a year to get pregnant again immediately, and after a one-year period, again to give birth to offspring.

The owner of the harem vigilantly ensures that his mistress did not stare at the side and had no relationship with rivals. But they themselves, meanwhile, are ready to do this at any time, constantly staring at the wealth of other males. 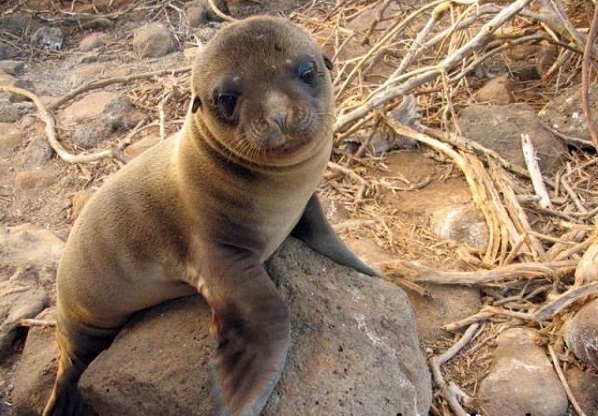 In the photo baby sea lion

Sea cubs immediately after birth have golden fur and about 20 kg of weight. The first few days they do not depart from mothers who protect them. But after the next mating, which can happen a week after the birth, they begin to gradually lose interest to the cubs and go to the sea for a long time in search of food. However, mothers sea lions continue to feed with milk, having up to 30% fat, their offspring is still about six months.

Gradually, youngsters begin to stray into their own groups and thus learn the wisdom of life, growing to puberty in bachelor flocks. Previously, males mature female individuals, adjacent to the harem of any of the husbands at the age of two or three years.

Males, competing with each other for the attention of the chosen ones, have a harder time looking for an opportunity to have the desired harem, so they acquire their own females no earlier than five years old. On average, the life of sea lions is about two decades.