he shrubby dog – one of endangered species of animals, population of individuals isn’t numerous. Because continuous deforestation is carried out, they are compelled to migrate, from a lack of food perish. An unusual mammal, something reminding a badger. Treats dogs because barks the same as they, but only on high-pitch tones. 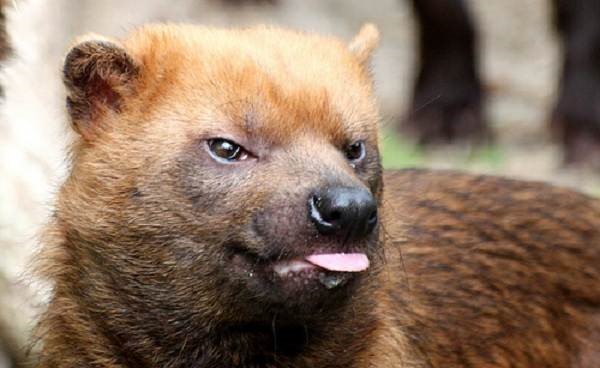 The ancient mammal, often meets in old records, eposes, fairy tales and old stories. There are some data dated three million years ago skeletons and skulls testify to it. The ancestor of a dog was larger also massivny, is visible because it was necessary to overcome long distances for search of food.

Features and habitat of a shrubby dog

Shrubby dog (from armor. Speothos venaticus) belongs to group of predators, family of canids. It is the only remained type of Speothos. On appearance reminds an ordinary mongrel, only on short paws.

The head small with the rounded-off small ears. The muzzle is similar on small a mishutka, eyes roundish, average size. A trunk long, dense, in the top part the expanded. 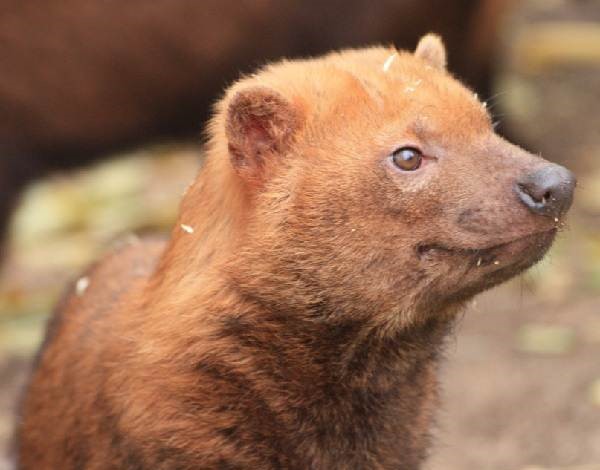 Length of a trunk reaches from 50 cm to 1 meter, height in withers about 30 cm, a tail short, to 15 cm. During evolution the animalconsiderably crushed (weight from 5 to 7 kg), but it allows it to hide perfectly in bushes or under big leaves (from here and the name).

Important part of the description of a shrubby dog is the color — at an animal prevails brown, passing into the brown. Young individuals have lighter shade, seniors are much more dark. Sometimes the bright red colors passing into the copper-colored meet. The head and a tail have considerable brightness in comparison with other sites of a body. 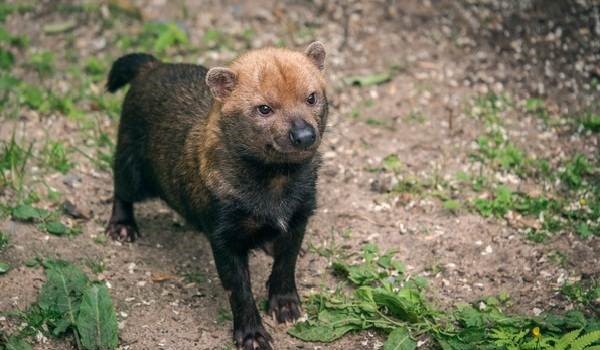 The shrubby dog lives in the Central and South America (Panama, Argentina, Colombia, Brazil, Guyana, Peru and Bolivia). Occupies the woods and savannas, always sticks to reservoirs. Sometimes the animal was noticed near pastures, agricultural farms and on the rarefied sites.

Character and way of life of a shrubby dog

The shrubby dog an animal leads the mixed life, day and night can be active. The den for itself pulls out in the friable earth, in the tumbled-down dried logs, doesn’t disdain the left holes.

As the animal stocky, it perfectly feels in dense thickets and impassable bushes. A dog – the excellent swimmer and the diver. They adore natatorial insects, whitebaits and larvae. 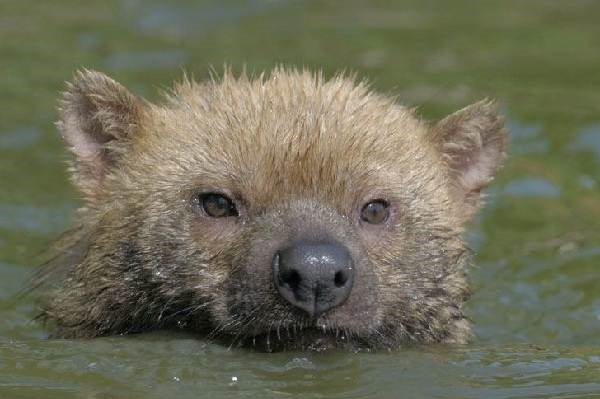 On a photo the shrubby dog floats down the river

In general, about an animal not really there are many data, how exactly it lives under natural conditions. Everything that scientists provide are supervision over a mammal in bondage. It is possible to call this family of canids a social animal because create packs (from 4 to 12 individuals). Can sometimes exist in couple.

The behavior of males is similar, as well as at ordinary dogs. They mark the territory with urine spraying. All the time devote to livelihood searches, can sometimes run on private territories. The shrubby dog on the nature a sociable animal, at a meeting with it doesn’t show aggression. On the contrary, it is curious and everything is interesting to it.

Communicate among themselves with the help of the barking and squeaky sounds. As thickets very dense, they have something in common. Have an excellent scent which isn’t even killed by water. Sometimes it is possible to hear growl, a sobbing, roar and a roar.

During fights for the territory or inning of borders, an animal resists till the last moment. A shrubby dog – the excellent fighter if it is necessary to protect the den. She grins, waits and seeks to seize to the opponent a throat. Will fight to the last gasp if there is no help, perishes. 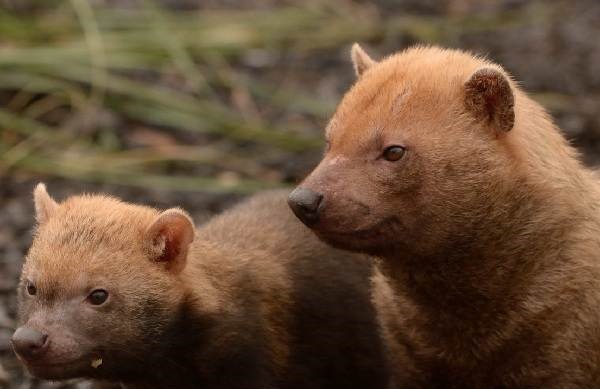 But cases when locals tamed a dog are frequent and used as the hunting. It is by nature allocated with unique passability in the most remote places. It can be not only bogs and thickets, but also deep gorges.

Food of a shrubby dog 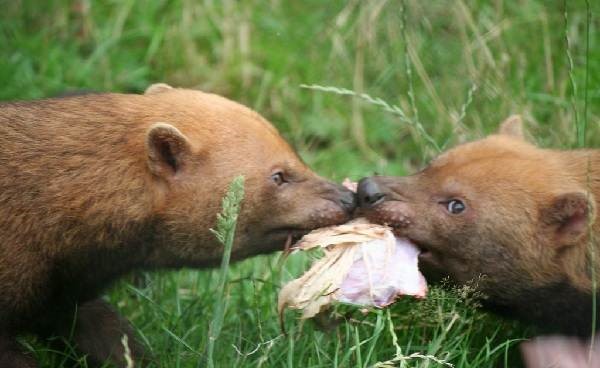 Animals in a pursuit of the victim apply the person strategy. They are divided, one part drives the victim to water, the second group waits on the other hand. Can use the fruits which grew in bogs.

Reproduction and life expectancy of a shrubby dog

In the conditions of nurseries the shrubby dog lives about 10 years, in habitat it is thoroughly not known. But there are assumptions that it is much less. A large number of infectious diseases, parasites, insects and natural enemies considerably reduce mammal population. People, jaguars, ocelots and cougars treat enemies. 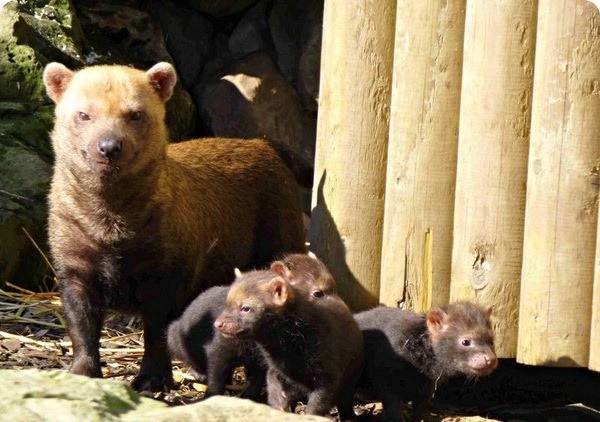 In pack the dominating female who suppresses other female individuals is always allocated. Pairing happens two times a year, pregnancy lasts from 60 to 70 days. In one brood can be from 1 puppy to 6.

Mother feeds with milk of kids of about 8 weeks. Until the female is occupied with posterity, the food to her is brought by an attentive male. Puberty comes at the individuals who reached 1 years.

If attentively to look narrowly at a photo of a shrubby dog, everyone will find similarity with many animals in her outlines: from a badger to a bear cub. This mammal is included in the Red List.

The reasons of disappearance of this family authentically to call difficult. It can be, both the natural reasons, and a human factor. Hunting for a shrubby dog is forbidden, the outbreaks of rage happen an exception. 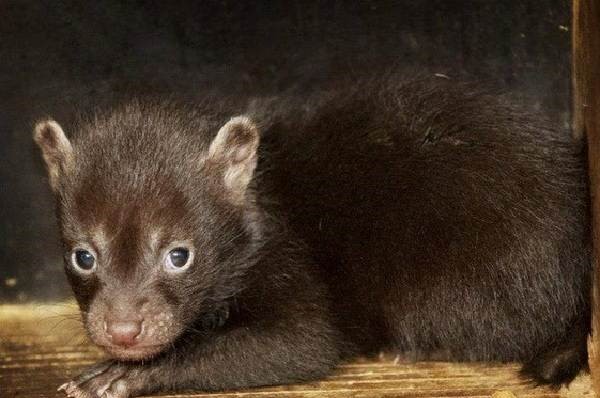 On a photo puppy of a shrubby dog

Total number of adult individuals at the moment makes 10 thousand therefore appropriated to a predator a signature stamp «endangered». In the nature there are three subspecies of this animal.