In the beliefs of the local inhabitants of the island of Madagascar, lemurs are inviolable holy animals, because they contain the souls of ancestors who left the earth. Sifaki especially loved. Meeting them as a blessing to the path, a good sign. Only here there are very few amazing lemurs left in the wild. 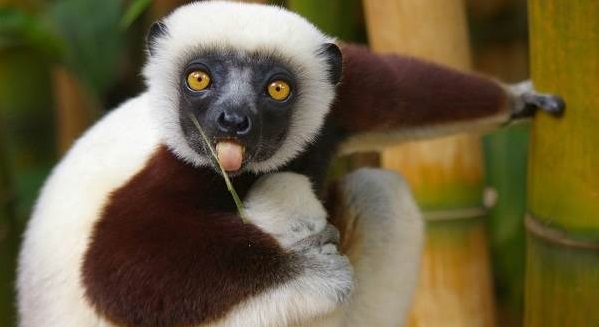 Peculiarities and habitat of Sifak

Lemur-like monkeys come from the family of indrievs have an unusual appearance. Dug this genus of primates quite recently, in 2004. Several species of animals differ in color, but the common forms are unchanged. Allocate sifaka Verro and diademic sifaka.

The elongated body of animals about half a meter in length, the same tail length. Weight is about 5-6 kg. Small black faces are devoid of vegetation, elongated more than the relatives indri. Ears are small, hidden in the scalp. 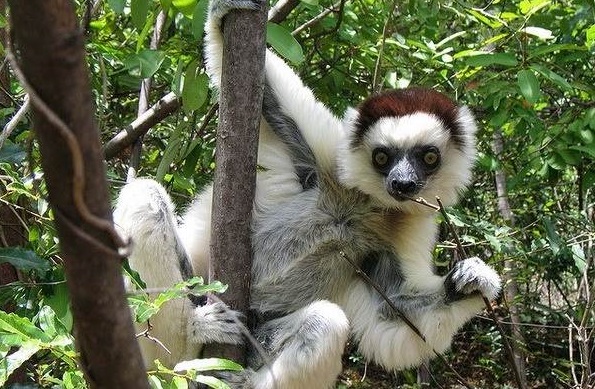 In the photo sifaka verro

On the belly of the coat is much smaller. Color depends on the type of animal. Gold-headed sifaka with an orange mop on the head, due to which it received the name. The back is peach or sand-colored with white patches and dark spots on the limbs.

The hind limbs are strong and strong, the anterior ones are much shorter, with a noticeable skin fold similar to a small flying membrane. They provide phenomenal jumping of monkeys. 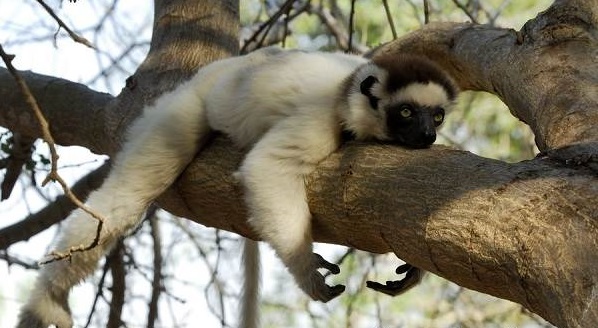 Giant jumps make a vivid impression on those who managed to see an unforgettable sight. Leap-flight at a distance of 8-10 meters — the usual movement sifaka. After a sharp push from a branch, the grouped little monkey’s body soars upward, opens up, the elongated skin on the arms of the lemur pulls up like a parachute.

Tail in flight does not play a role, and a stretched body with limbs thrown forward is like a flying squirrel. Exact movement on a tree and a usual pose do not reflect the spent efforts and risk of a giant jump. 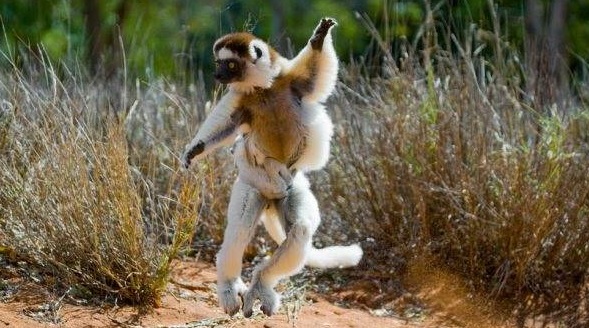 Lemurs descend from a height more difficult. They do it slowly, carefully rearranging their paws. Being on the ground gives confidence, they move in an upright position, with jumps on their hind legs 3-4 meters in length. They spend most of their time in trees, in a safe environment for themselves.

The name of the animals comes from the uttered sounds in the minutes of alarming danger. The scream begins with a growling-hissing sound, and ends with a sharp clapping «fak», like deep hiccups. The overall sound is similar to the name of the lemur, in the pronunciation of the inhabitants of the island of Madagascar.

The habitat of Sifaka Lemur is very limited. You can find them in the tropical forests of the eastern part of the island of Madagascar, on an area of ​​about 2 thousand square kilometers. Most of the animals live in the reserve and national park, in moderately mountainous terrain. 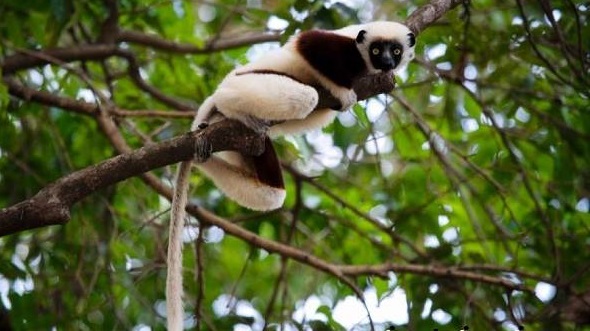 Lemurs do not share their plot with any of their relatives. Sifaka is included in the list of the rarest animals on earth, keeping and breeding in captivity unsuccessfully.

Animals live in small groups of 5-8 individuals that make up family groups of parents and offspring of different ages. Activity is manifested in the daytime; at night, sifaks sleep on treetops, fleeing predators.

The main part of the day the monkeys spend on the search for food and rest, the rest — on communication and games, in which individuals of different ages are involved. They love to jump on the branches, deftly clinging to the trunks. During the day they overcome the distance to 1 km. 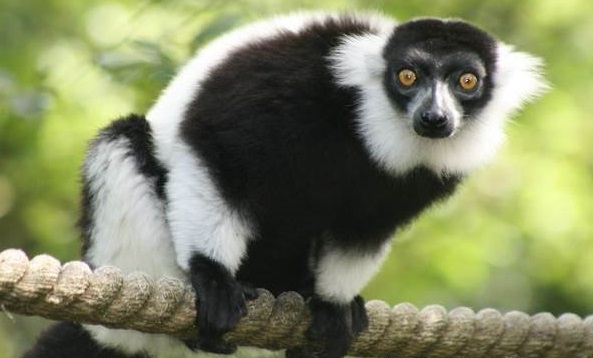 In the hot season, they descend, fall apart on the branches in the most unusual poses, and slumber. They can curl up and look touching. Lemurs are allowed close to themselves, if there are no sudden movements and sounds.

Lemurs are called sun-worshipers, for the custom in the early morning to climb high on a branch, turn to the rising sun with their faces, raise their hands and, frozen, bask in the sun. In this position, the animals look elegant and touching. So they dry the wet fur, but people think that animals pray to their gods.

Locals attribute sifakam unusual qualities. They believe that monkeys know the secrets of healing from all diseases, they are able to heal wounds with special leaves.

Monkeys are very close to each other in family groups, are distinguished by attachment to each other. Leadership belongs to the female. Communication with relatives takes place with the help of sounds resembling barking. 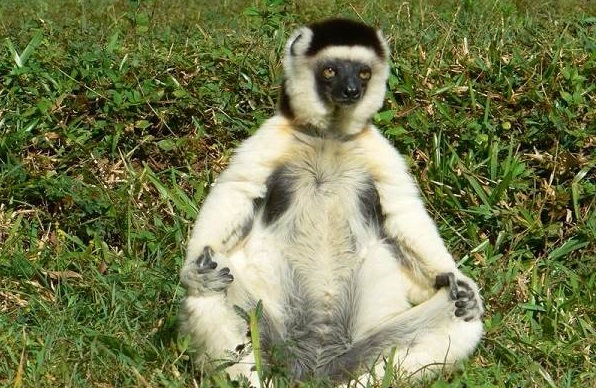 Natural enemies of animal sifak are hawks, actively stealing monkey cubs. Unfortunately, man also contributed to the decline in the population of these rare primates.

Sifaki are vegetarians. The basis of the diet is vegetable food, consisting of twigs, leaves, flowers, bark, buds. Treats for them are fruits, various fruits. If food needs to be lifted from the ground, the lemur bends down and grabs it with its mouth, less often picks it up with its limbs.

The search for food begins in the morning, the animals move at an average height of trees and pass from 400 to 700 m. The group is always headed by a dominant female. A tropical downpour can confuse plans and cause the monkeys to take shelter for a while.

Despite the abundance of food in the forests, primates are not averse to visiting people to get extra treats in the form of cultivated fruits, rice and legumes. Sifaku love for gullibility and sometimes tamed. 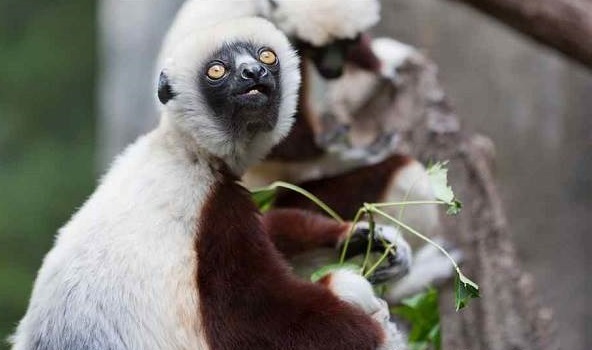 Marital time sifaki insufficiently studied. The birth of babies occurs in June-July after the pregnancy of the female, lasting up to 5 months. Cub appears alone.

There are stories about the high degree of motherhood of silky sifak, which weaves a special cradle of soft twigs for a newborn baby. The bottom is lined with its fur pulled out on the chest.

On the tree is chosen a secluded place where the cradle is located. To the wind did not take it, the bottom prudently weighted stones. Some descriptions confirm that females give birth to bald patches in the area of ​​the chest and forearm. If such cradles exist, then they serve not for long. Progeny do not need nests.

The babies are carried up to one month on the breast, and then, having got a little stronger, the cubs move to her back. During this period, the mother is unusually careful in her movements so as not to hurt the baby. Feeding babies with milk lasts up to 6 months.

Lemurs hold tight to the mother’s wool, which carries them everywhere with them. A couple of months the baby studies the world through the eyes of the mother, and then he tries to lead a separate life. Growing up young stock lasts 21 months. The sexual maturity of females begins at 2.5 years, and then they annually produce offspring.

Communication of young animals with congeners in games helps to get comfortable and gain strength. But many lemurs, not reaching maturity, die from diseases or become victims of predators. 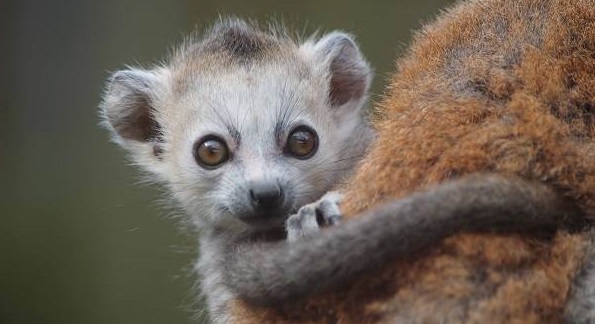 Amazingly graceful lemur-like monkeys are listed in the Red Book. Crested sifaka and its relatives can go down in history, because the places for primate are reduced. The total lifespan of sifak species is approximately 25 years. Madagascar forest residents require care and attention.