Description and features of the skunk

Skunk refers to the class of mammals. He can not climb trees. These animals move only on the ground. Skunk differs in its way of movement. 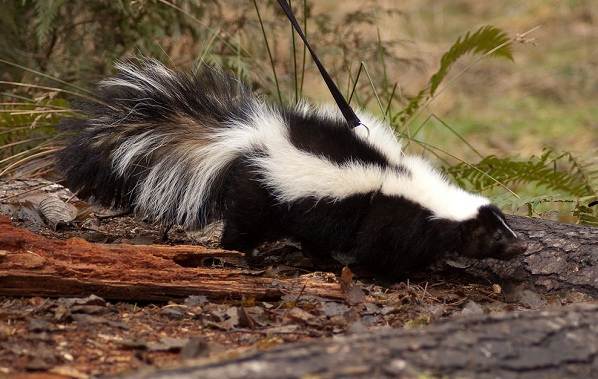 In order to make a figurative step he needs to bend his back, take his tail aside and make a short jump. The four-legged, thus, moves in a skip.

Skunk is known for its unpleasant, pungent smell. The first reaction of children is «fu skunk«. The cartoons exaggerate its smell. The source of this stench is under its tail. A special gland produces a liquid that has a strong odor. 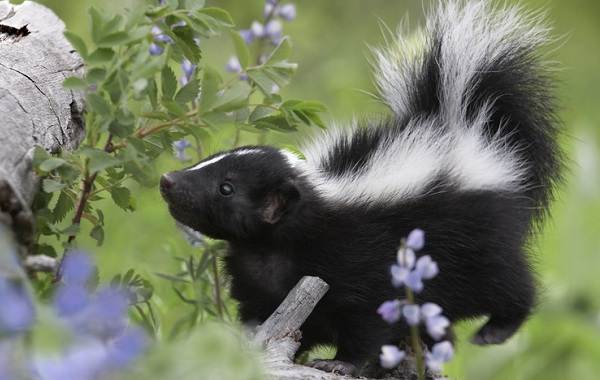 This is an unusual remedy for predators. When faced with danger, the animal turns back to the enemy, lifts its tail and squirts out the stinking mixture. The jet of liquid falls on 1-6 meters. The smell is so persistent that the thing soaked in it is subject to the careful influence of detergents.

The smell of a skunk can bring out a special spray. His defense is restored within 10 days. All this time he is defenseless. An animal affected by a skunk will no longer approach it, and its bright color will contribute to a reminder of the danger.

Meat skunk is very much appreciated. But the smell of wool is the main reason why it is rarely seen on the market. The color of these predators is bright. On a black background, two white strips on the sides or spots. And one more white strip on the muzzle between the eyes. 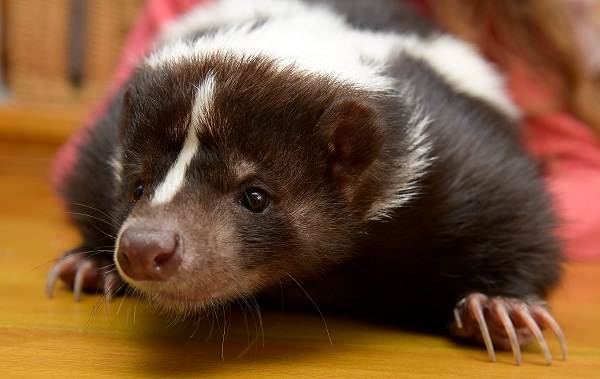 The tail is lush and long with white and black stripes. Its length is 17.3-30.7 cm. The body of the skunk is strong. Paws short, but with large claws. Males are larger than females by 10%. Externally, the animal is very attractive, so many houses have skunk pictures.

Skunks live mainly on flat surfaces. The animal prefers not to depart from water sources more than three meters. His homeland is believed to be the territory of the United States and the south of Canada.

An animal skunk not found in Alaska and Hawaii. The mammal is also prevalent in such countries as Mexico, Nicaragua and El Salvador, Argentina, Guatemala and Costa Rica, Bolivia, Paraguay, Peru and Belize, Chile

The place for housing is not more than 1800 meters above sea level. Some species are taken up to 4000 meters. Skunk lives in the forests or in the meadows, near the settlement of people. 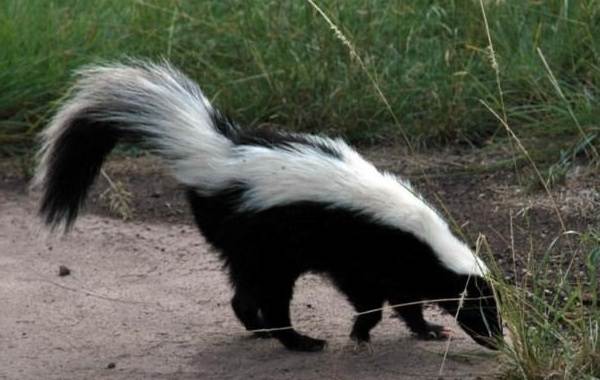 Shrubs, rocky slopes and fringes near rivers are the most beloved places of these animals. In winter, the animal hibernates. Before that, they prepare their home, collecting dry leaves and grass.

Place for overnight should be dry and inconspicuous for others. In December, with the onset of cold weather, the minker falls asleep. Nora usually chooses skunk is someone dug. Nora foxes or emptiness in dry stumps can be useful for a home. Females sleep with cubs, and males separately. Neighborhood is not tolerated. Wake up at the end of March.

In Italy, Germany, the United Kingdom, the Netherlands and the United States, minke whales are kept as a pet. But in some states the home skunk is a big rarity. The law protects these mammals from unauthorized trade. Where it is allowed, you can buy skunks in animal shelters or in fur farms, where they remove odorous glands. 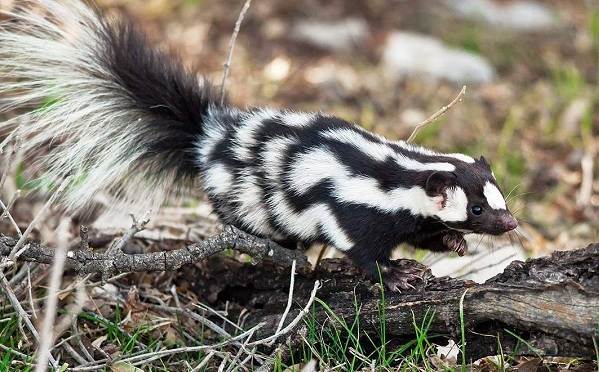 It’s easy to care for such an animal. Skunk in Russia is very expensive, because there are no kennels. They are brought from America. But the desire to have them at home also extends to Asia. You can expect that in the future someone will take them to breed for sale. Photo skunk and their owners talk about the perfect combination of these animals at home.

The mating period falls on autumn. In males, sperm appears in March of the month, this is evident from the enlarged testes. By September they increase to the maximum size. The skunk is ready for mating. In October, the production of sperm ceases.

In females puberty occurs 1 year after birth. The estrus appears in September, but the males are admitted to themselves in early October. Skunks polygamous mate with several females. In caring for the cubs do not take any part. 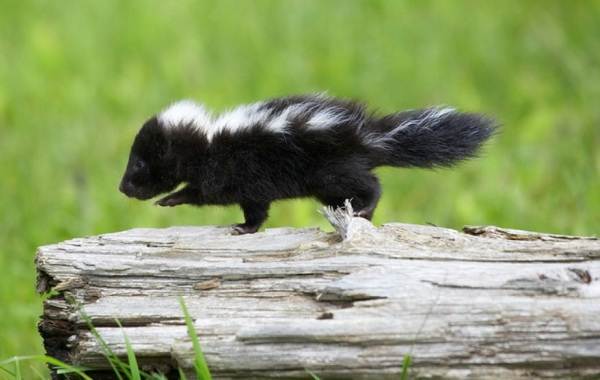 The duration of pregnancy is 28-31 days. In these mammals, if necessary, delayed suction of the embryo to the wall of the uterus. This phenomenon is called the embryonic diapause. In such cases, the pregnancy is prolonged to 63 days.

In the litter appears from 3 to 10 cubs. More often it is 5-6 individuals. Little skunks appear in March or in May. Newborns weigh 22.5 g. They are born blind and deaf. At kids the skin looks like a soft velor. Color is the same as in adult skunks.

Two weeks later the cubs begin to see clearly, and in 4 weeks they can take a pose for self-defense. They can shoot with a fragrant liquid for 40-46 days. The female feeds its offspring for 6-7 weeks. Independently they begin to eat in 2 months. The first winter of the family are together, the next skunks are looking for a place to hibernate themselves. 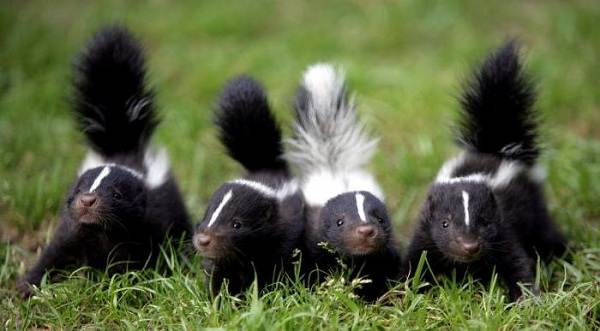 Skunk lives in captivity to 10 years, but in nature this figure is much smaller. Total about 3 years. This difference is due to high mortality. The main causes are diseases, freeways and predators. They are hunted by owls, bears, foxes, coyotes, badgers and pumas. About 90% of the young can not survive their first winter.

Skunk does not know how to catch fast or large prey, for this he does not have the necessary abilities. Therefore, its diet includes small rodents, lizards, frogs. If it happens, he can attack the helpless bunny.

He also feeds on carrion. Diet in a mammal is varied. In summer, he can eat fruits and wild berries, as well as seeds and grass. The menu depends on the season. In winter, animals, and with the onset of heat, vegetation. 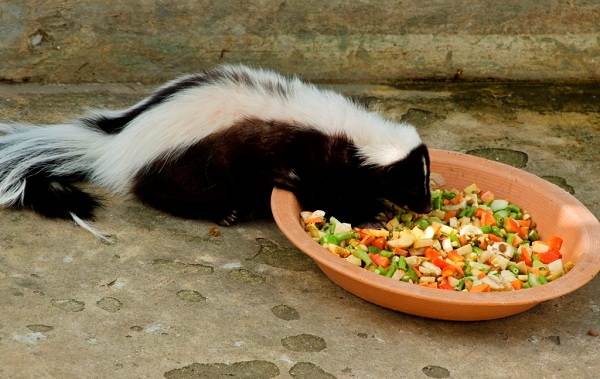 Mostly the predator goes hunting at night. His sight is weak in the daytime, so at night he enjoys hearing and smelling. With his nose and paws, the skunk digs the earth in search of insects.

Turns the fallen bark and stones in search of lizards. Small rodents skunk stretches, waits, and then makes a jump, grabbing prey paws and teeth. A similar tactic of hunting for grasshoppers and beetles. Only in this case he presses insects with his feet to the ground.

Some animals roll on the ground in order to remove, for example, the poisonous skin of a toad or to remove thorny villi in caterpillars. So that he does not catch a skunk, he eats it on the spot. In his own feces he occasionally catches coprophage. These mammals are very fond of honey. But if they come upon a hive, he will eat everything, honeycomb and bees and honey. 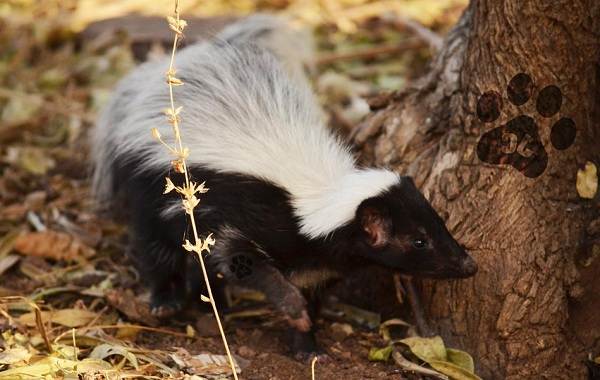 The bee sting is not painful for him, but thick thick wool protects against bites. Weak place is just a muzzle. Eggs are also related to its delicacy. To break it, the skunk throws them under him, in the hope that the egg will stumble on something solid and break. At home, you need to feed the skunk as well as the dog.

He needs such a diet: not acute, not salty, not sweet, not fat. You can give all the vegetables and their fruits on the menu should be at least 50%. From proteins give cooked fish or chicken. Egg, rice, millet and other grains in the diet should be constantly. Like all animal skunks eat only natural products.

Preservatives for them are poison. In agriculture, they are of considerable benefit, eating rodents and insects that harm the crop. Rarely, these mammals can eat carrots or beets from the garden.

Wolverine is an animal. Lifestyle and Wolverine habitat