Sloth is an animal. The lifestyles and habitat of the sloth

An animal, which is called a sloth, belongs to the group of Partless Teeth. To them relatives asked for anteaters and armadillos, although they are completely different in appearance. 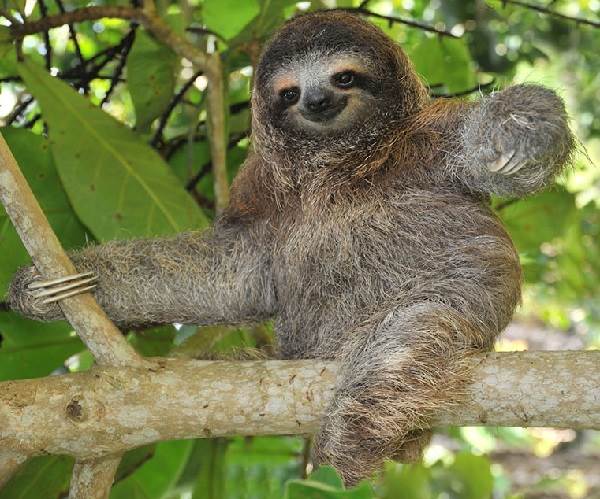 Another such animal, which would outwardly resemble a sloth in nature, probably does not exist. Even among their kindred, there is no other kind. In the world there are only 5 species, which consist of two families.

Features and habitat of the sloth

A distinctive feature is the fingers in the form of a hook: one has three, others have two. However, they have some similarities between themselves. All animals are small in length from 50 to 60 cm and weigh a little — 4-6 kg. The coat has a brownish-gray color. Having looked at the photo of the animal, you can see that the appearance of the sloth looks like the physique of a common monkey.

This squad has very long limbs, but a tiny head. Unusual in the form of a hook, tenacious fingers allow free hanging on the branches of trees of any configuration, but they can not make sharp jumps and free vibrational movements.

Because of the increased density and length of the hair, in some species, only charming eyes and a black nose are visible from the shock of hair. And the tail is so small that it can hardly be discerned on the body. 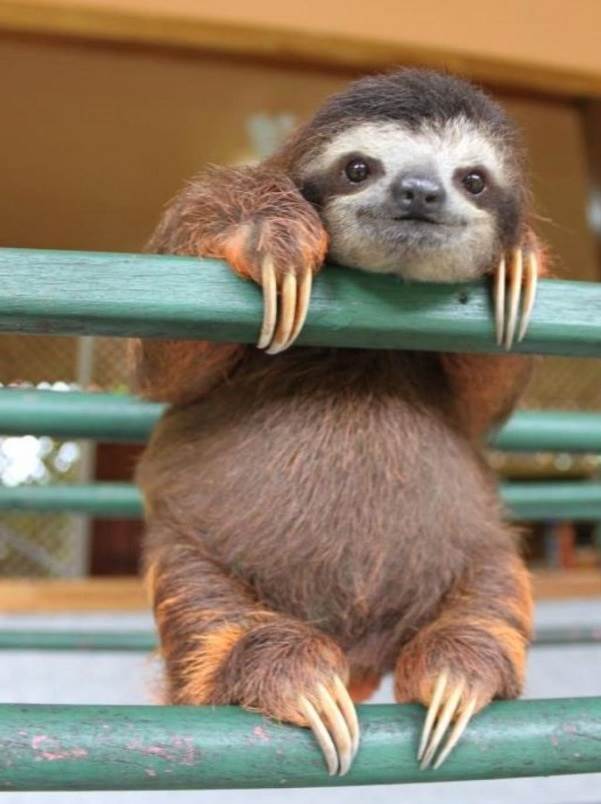 Looking at the face, we will see a very friendly, happy life animal. Giving everyone a smile, they create an excellent atmosphere of friendliness.

Although first seeing the sloth, some will consider them an unpleasant animal. Perhaps some species are a little repelled by their appearance, but their inner world and body structure can be very attractive. Even the device of the internal organs of the sloth is different from other mammals.

Here is one of the unusual facts: the teeth of sloths without roots and completely lacking enamel, but they are equal as to selection. But even here there is an exception: two-fingered sloths have two detached fangs and therefore they are referred to the group of incomplete teeth.

Nature has endowed them with an excellent sense of smell, but otherwise, unfortunately, they do not succeed. The brain because of a primitive way of life in these animals is small. Sloths are very sluggish and therefore the location of all organs is different from other mammals. 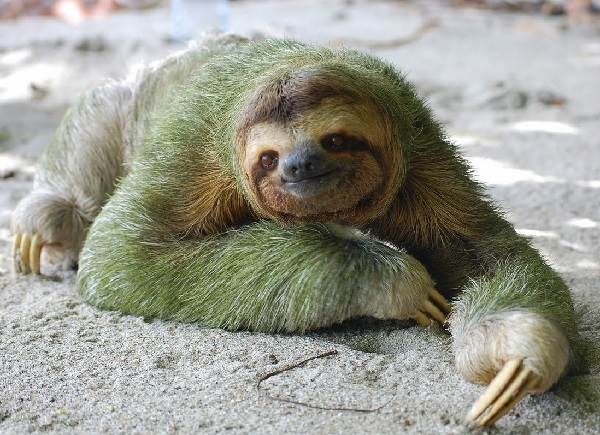 For example, the liver is located closer to the back, the spleen has left to the right, and the stomach and intestine have surpassed all normal sizes. The mirror arrangement of the organs was due to the constant hovering of the back down.

A remarkable feature of sloths differ from other wood inhabitants. If necessary, they must descend from the trees. With their slowness and slowness, this is a very laborious process.

At the same time, they are also defenseless against any predators. Therefore, such descents from a height, which is sometimes 40 meters or more, they do very rarely. Strangely enough, cleansing of the intestine occurs only once a week!

Observance of cleanliness is one of the factors for which one can praise unusual animals. They act like cats, making a deepening in the ground, carefully raking their feces.

To see a sloth moving around the earth is a special sight. With their crawling movements on their stomach they look comical. And all this because of the long fingers with huge hooks. It seems that they are trying their best to overcome a small obstacle. Although, this is their usual state. 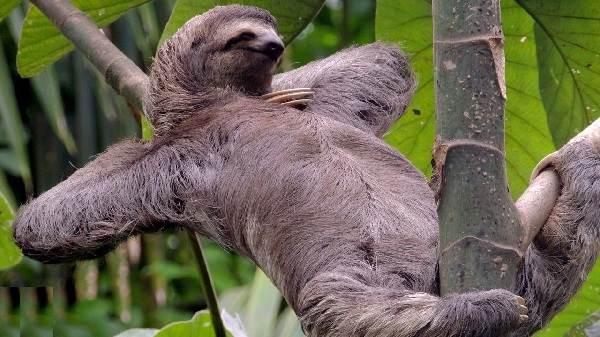 This species of mammals has the lowest body temperature: it ranges from 30 to 33 degrees, and sometimes drops to 24 degrees, which is quite impressive. But they can be called record-breakers for sleep — sloth sleep ten hours a day.

Surprisingly all these animals are excellent swimmers and do it much faster than moving through trees. Swimming is good for them, since their wool is colored with algae in a greenish color, which, in the end, disguises them from ill-wishers.

Sloths are heat-loving animals that live in the warm tropics of the equatorial zone of South America. They are very comfortable in the forests more often, they are comfortably arranged in wide crowns of trees. 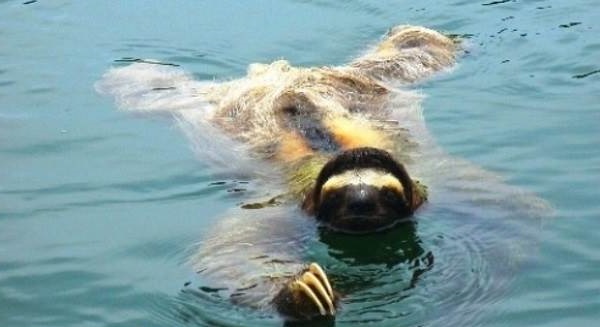 The most extensive range of family sloths in Central and South America. They are found in Honduras, as well as in the north of Argentina. Lazy people can be found even in the mountains at an altitude of up to 1100 meters. Because the abundance of food is inherent in these evergreen places. Everywhere lazy lurks in danger. The Indians use their tasty meat for their food.

The character and lifestyle of the sloth

These amazing animals are very fond of loneliness, so it is rarely possible to meet at least two individuals at once. Due to the peaceful nature of the animal, sloths never manifest aggression. They calmly feed and sleep next to each other. They can express their discontent with loud pangs, and sometimes one can hear the cry of «ay-ay».

In general, you can describe a sloth like a slowed-down animal, both inside and out — flaccid blood circulation, imperceptible breathing and slow movement.

They set a world record for the slowest bowel movement — removal from the intestine of not overcooked ballast. This happens only one, less than three times a month. Although they do not differ in eye sight, they can enjoy colorful pictures of the amazing world of nature. 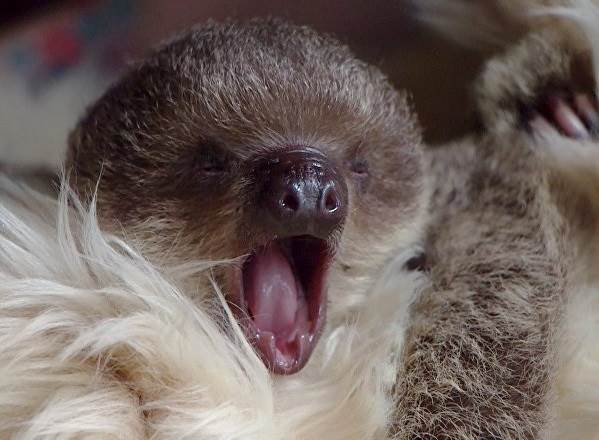 Hearing and scent their nature has deprived, therefore strong weapons and very sharp claws are a sure weapon against the ill-wisher. But the immobility and good disguise in the tone of foliage saves these people from enemies.

Drowning in the ocean of foliage and a lot of fruits that are at the very mouth, sloths do not need to «run» in search of food. Yes, and water can be full of juicy leaves and fruits.

They can quench their thirst, licking drops of dew or rain from the leaves. Having fallen a victim or having received a mortal wound, and also a poisoning, sloths all these troubles will transfer very easily. They have good survivability. Like a frog, they have a heart that has been taken out of their chest, and they do not die for long.

Many people would like to have such an animal at home, but only wealthy people can afford to buy sloth. You can buy it only in the nursery at a price of 50 thousand rubles. 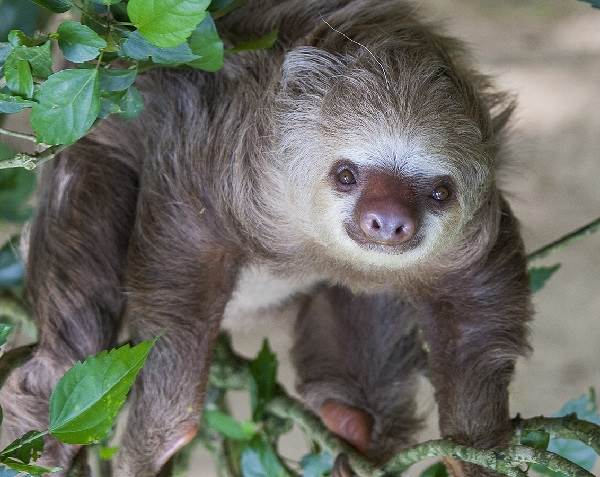 The pet’s content does not require much effort. Most of the time he spends half the time, so special attention to himself does not require. He is deprived of the desire to communicate. In fact, your life does not change with the advent of this living toy. The sloth has a disregard for everything that happens around.

Accustomed to a person, he can come down to you and climb under the blanket, but very rarely gives himself to pat. Fortunately, the most favorite occupation for them is water procedures.

Therefore, special efforts to redeem the animal to get rid of a specific smell from the host will not be required. Thanks to strong immunity, they practically do not get sick. 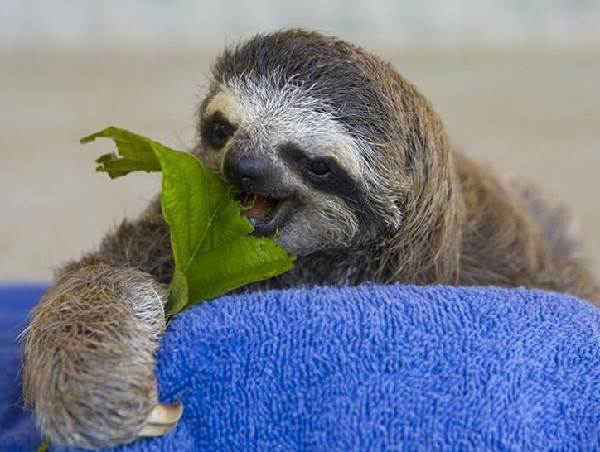 It all depends on the content and care, but instead of gratitude do not wait. Is it worth at that price to buy an exotic animal to keep a sloth in captivity? Each person will give an answer to this question individually.

The main diet of charming animals is eucalyptus leaves. Such food sloths are constantly eating almost without stopping. Due to the fact that the leaves are a low-calorie product to saturate, you have to eat them in huge quantities. 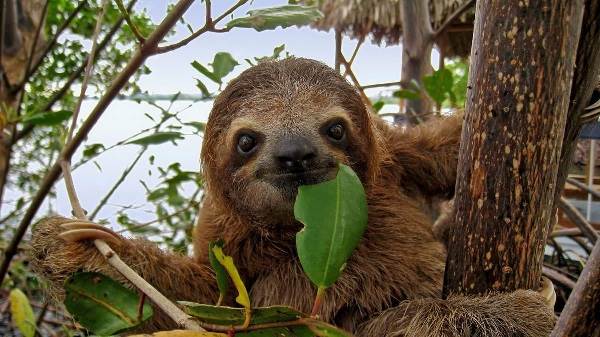 Since the paws hold the awkward body on weight, it is necessary to break off the succulent leaves with lips or teeth. Digestion of food lasts about a month. Two thirds of the animal’s mass is food.

Their menu includes juicy vegetables and fruits, and they also like to eat young shoots. Therefore, they can be called vegetarians. Surprisingly, sloths will not give up the chance of a lizard and a small insect accidentally caught on the tooth. Such unusual food is unlikely to be found for feeding these animals in captivity.

Reproduction and longevity of life

Reproduction of these unique animals takes place at each species at different times. So, three-toed sloths begin to mate in the spring — in March or April, and two-fingered prefer to do it all year round. The female wears a baby under the heart for six months, but can go on for another six months. Only one cub appears in the light. 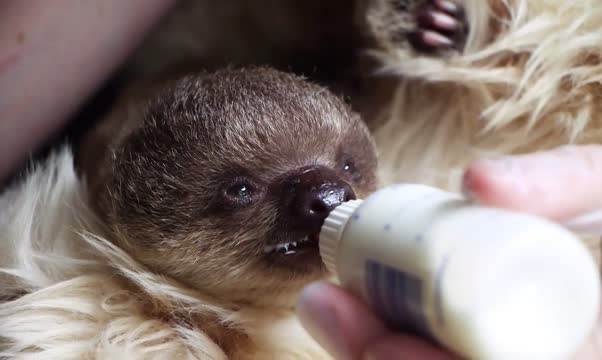 Birth occurs directly on the tree. Clinging to the front paws, the female firmly holds the freely weighing body vertically down and gives birth to the baby. Barely born, he grabs the mother’s fur and quickly finds her breast.

Only with the expiration of two years, he begins to gradually get used to solid food. Autonomy baby gets to nine months, and becomes an adult to two and a half years.

The male, the newly introduced child, is not at all interested, so there is no need to wait for help from the female. Only the mother is attentive and tender. Young sloths are much more active than adults. Life expectancy for sloths is long, they can live to the age of 40, but in captivity the life cycle is completed by the age of twenty.