Peculiarities and habitat of the cat shark

The cat shark belongs to the kharhariform family of sharks . There are many types of these predators, about 160. But all of them are united by one distinctive feature — the shape of the head. 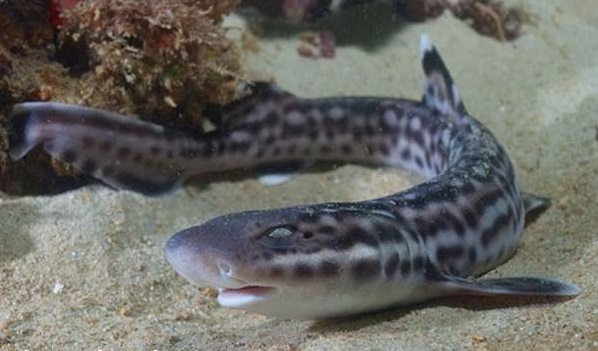 She reminds head pets. But not only for this shark got the name — the cat. All of them are nocturnal predators and perfectly see in the dark. They are obliged to this by special light-sensitive sensors, which are located near the eyes, and pick up signals that come from other fish or humans.

By the way, and their eyes are big enough and bulging. All representatives of the species of feline sharks are quite modest in comparison with other fish of this order. In length, they rarely reach more than one and a half meters, and the weight does not exceed 15 kg. Smell is very well developed, which helps when hunting for food. The teeth themselves are very small and dull. 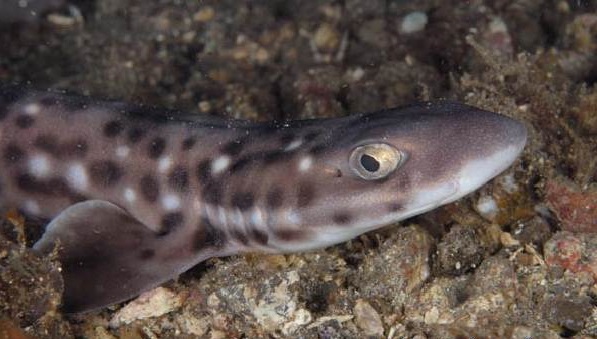 These sharks prefer a temperate climate, so they are not found in tropical waters. In the Black Sea you can find only a few specimens of the feline shark near the coast of Turkey, which got into it through the Bosphorus Strait. Each species of feline sharks has its own characteristics , the description of which should be given extra attention.

An ordinary feline shark body size does not exceed 80cm. Its color is sandy, with a small amount of dark brown spots, and the belly itself is grayish. The skin is rough to the touch, like sandpaper. Females have smaller teeth than males. These sharks live in shallow waters in the Atlantic waters of Europe and North Africa.

Black cat sharks resemble the appearance of a tadpole. They have a soft and flabby body with thin skin. Color uniform black. Sharks live at a depth of, as a rule, about 500-600 meters. But there were cases that they were met and lower. Their length does not reach the meter. You can meet in almost all oceans.

The feline demon shark is the most mysterious species. Only twice were able to catch this rarity near the shores of China. The shark is dark brown, almost black with a long tail fin. The body itself is long and narrowed to the snout. On the head there are small eyes, wide nostrils and small gill slits. It lives deep in the bottom. 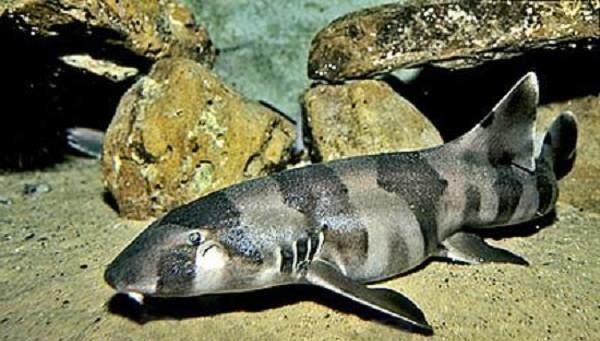 Another species swims in the Pacific and Indian Ocean — the brown-striped cat shark . The depth at which you can meet her, not less than 80m. It is quite large, more than a meter long. The body is brown, slightly elongated.

The most amazing thing is that these sharks can be without water for up to 12 hours, which helps them survive during low tides. They were called brown strips because the young shark has dark stripes and black dots on the body, which then disappear and the color evens out.

The striped cat shark has a slender, long body that is covered in a variety of dark brown and white spots. This species lives in the Pacific Ocean, at a depth of no more than 100 meters. But usually likes to swim in shallow water. It is small, up to 70 cm. People jokingly called her “shark pajamas”. It does not differ in speed and rather shy. 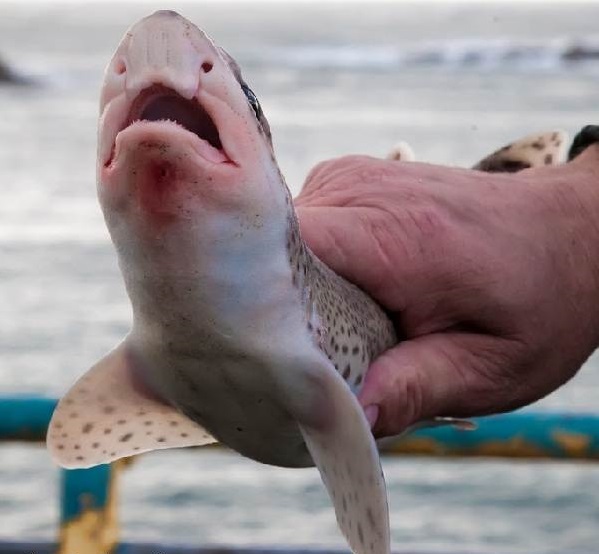 The most memorable view is the Californian cat shark. If you catch it, then the shark swallows air and swells. Thus, she tries to scare the offender. Sometimes you can see how several of these balls float on the water. Any type of cat shark can be easily identified by the photo .

The nature and lifestyle of the cat shark

The cat shark is more like a loner and does not live in packs. Only sometimes you can see several individuals swimming together. The reason for this may be a joint hunt. There was a case when several sharks attacked an octopus and attacked it in turn.

During the day, she hides inside underwater crevices, caves or in the thickets of underwater vegetation, and at night she goes in search of food. Slowly patrolling her territory, she looks out for prey. For a successful hunt, she has everything you need: a flexible, slim body, good reaction and strong teeth. 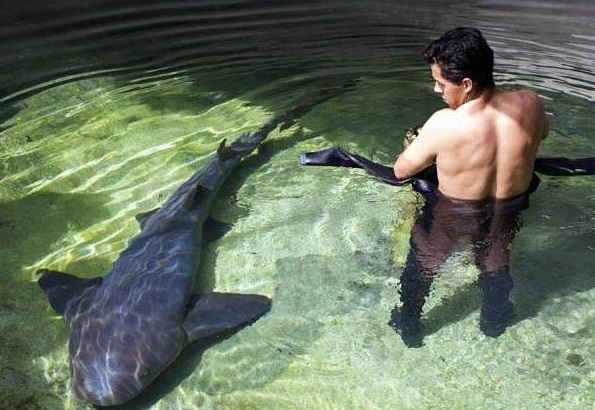 Feline sharks can be found in many public aquariums and even in private collections of some aquarists. These exotic fish are very unpretentious in content, it is interesting to watch them. For humans, they are absolutely safe and will not attack if they are not provoked. But even then, they will most likely just try to swim away.

Feline sharks feed on small fish, cephalopods, crustaceans and bottom invertebrates. Sometimes, in the absence of other food, they will not disdain the larvae of marine animals. Known cases of attacks on larger prey, but, as a rule, unsuccessfully. They lie in wait for the victim in ambush and very rarely chase after it.

Cat sharks breed by laying eggs. Since there are many species, we can say that the spawning takes place year-round. And depends on the habitat of one or another species of shark. For example, in the Mediterranean — March-June; off the coast of Africa — the middle of summer; in the cool waters of Norway — the beginning of spring. The female lays from 2 to 20 eggs. Each egg is protected by an egg capsule. It is called — «mermaid purse.» The length of the capsule to 6 cm, and a width of about two. 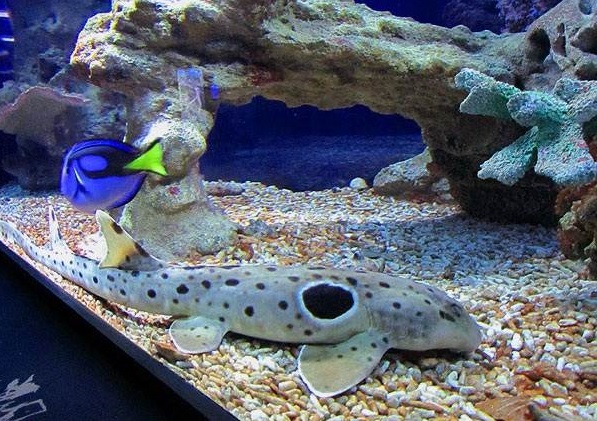 The corners of it are rounded and short hooked processes that attach it to the bottom, algae or stones, depart from them. The development of the embryo depends on the temperature of the surrounding water and the type of shark. On average, 6-9 months. The newborn shark is 10 cm long. Sexual maturity occurs when it reaches a length of 38-40 cm. The life span of a feline shark is 12 years. 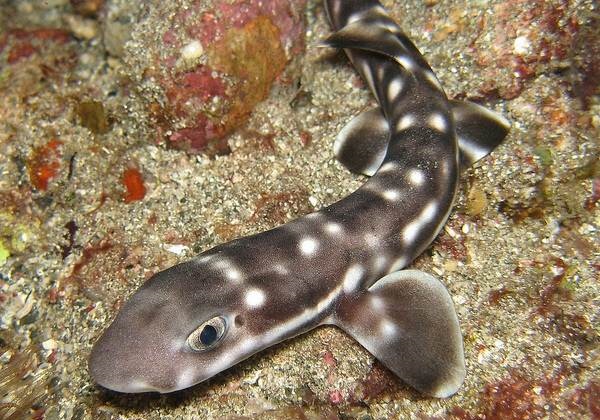 Pretty good fertility does not allow this species to disappear from the face of the Earth. The extermination of sharks is insignificant. They do not have commercial value. They are caught in aquariums, mostly tourists hunt. Because of their small size, they are more often used as bait for larger fish .

In food, the meat of this shark is consumed very little. The liver of the fish itself is generally very toxic. Some people consider meat as a delicacy, while others simply do not like the taste. The only ones who cook dishes from it are the countries of the Adriatic coast.