Perhaps the term «Red Book» is known to most people. This is one of the most important books, thanks to which you can learn about animals at risk. 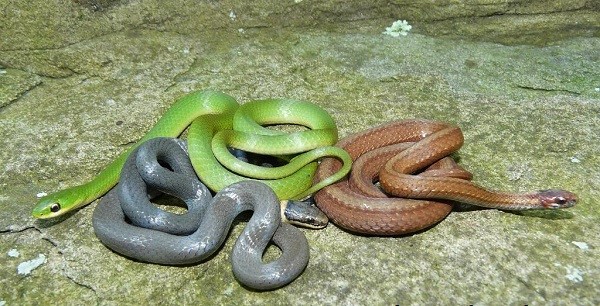 Unfortunately, there are quite a lot of them and it does not become less. Volunteers, employees of zoos, zoologists are trying to save animals from extinction, but everything can destroy the banal ignorance of the inhabitants. For example, snakes and irrational fear of them. Of course, not all of them pose a threat to humans, but the unconscious desire of the majority (to destroy the reptile) plays a bad role in trying to preserve the number of rare reptiles. That is why it is so important to know which snakes are listed in the Red Book.

West Boa (Eryx jaculus). Grows up to 87 cm. He has a dense constitution and a very short tail with a blunted end. The diet is dominated by lizards, round heads, rodents, large insects. There are small rudimentary hind legs. Can meet in the Balkan Peninsula, Southern Kalmykia, Eastern Turkey. 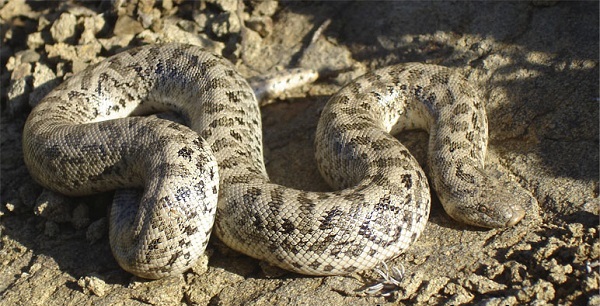 In the photo is a western snake

Japanese snake (Euprepiophis conspicillata). It can reach 80 cm, of which the tail accounts for almost 16 cm. It has a round pupil. Rodents, small birds and their eggs predominate in the diet. It inhabits the territory of the Kuril Reserve (Kunashir Island), as well as in Japan in the region of Hokkaido and Honshu. Studied a little.

In the photo the Japanese snake

Aesculapian snake (Zamenis longissimus) or esculapian snake. The maximum recorded length is 2.3 m. This exceptionally aggressive snake listed in the Red Book may be gray-cream, yellowish-brown or dirty-olive. The species is known for the regular birth of albinos. In the diet mainly chicks, rodents, shrews, small songbird and their eggs. The digestion process can take up to four days. It inhabits the territory of: Georgia, the southern parts of Moldova, the Krasnodar Territory to Adygea, Azerbaijan. 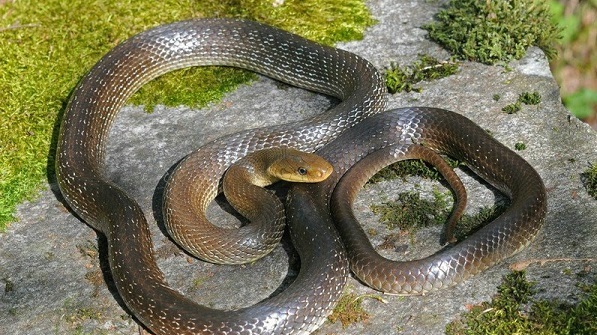 In the photo of the doctor skis

Transcaucasian snake (Zamenis hohenackeri). Grows up to 95 cm. The pupil is round. It feeds like boas, squeezing chicks or lizards into rings. In addition, quite willingly climb trees. The opportunity to make a laying comes after the third year of life. It lives on the territory of Chechnya, Armenia, Georgia, North Ossetia, northern parts of Iran and Asia Minor. 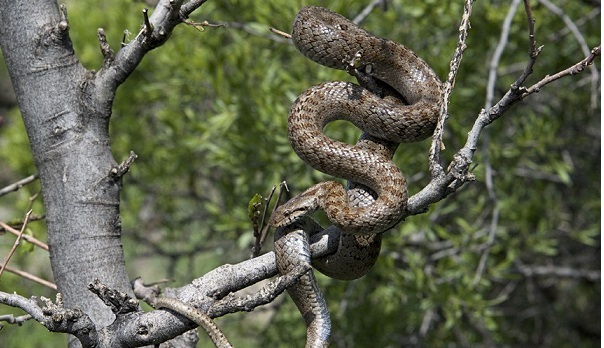 The thin-tailed climbing snake (Orthriophis taeniurus). Another view of the red-book snake-less poisonous snake. Reaches 195 cm. Prefers rodents and birds. There are several subspecies of snakes, one of which, due to its peace-loving nature and beautiful colors, can often be found in private terrariums. It inhabits the territory of Primorsky Krai. It is regularly found in Korea, Japan, and China. 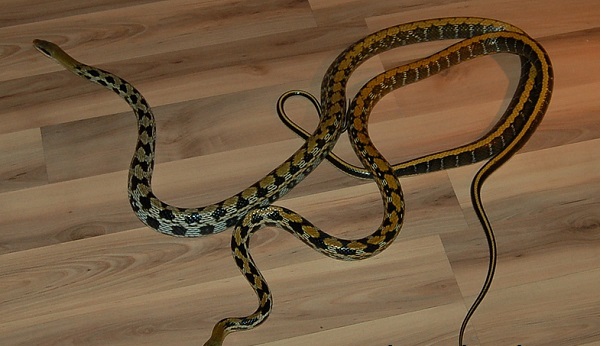 On the photo is a thin-tailed climbing snake

Striped snake (Hierophis spinalis). In length it can reach 86 cm. It feeds on lizards. It is very similar to the poisonous snake living in the same area. The key difference is that the harmless snake has a light stripe stretching from the crown to the tip of the tail. It lives in the southern part of Kazakhstan, Mongolia and China. Cases of meetings near Khabarovsk are described. 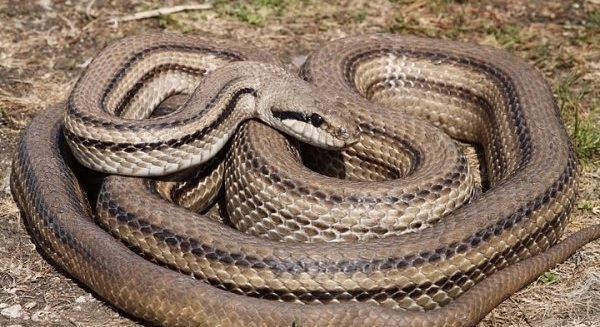 In the photo is a striped snake

Red-belted dynodon (Dinodon rufozonatum). The maximum recorded length is 170 cm. It feeds on other snakes, birds, lizards, frogs, and fish. This moving beautiful snake of the Red Book of Russia lives on the territory of Korea, Laos, eastern China, on the islands of Tsushima and Taiwan. On the territory of our country was first caught in 1989. Studied a little.

Oriental dynodon (Dinodon orientale). Reaches one meter. It feeds at night with mice, lizards, chicks. It lives in Japan, where it is called an illusory snake for fearfulness and the twilight way of life. The existence on the territory of Russia (Shikotan Island) is questionable — the meeting was described a long time ago. It is possible that this snake already belongs to the extinct species.

On a photo east dynodon

Cat snake (Telescopus fallax). It can reach a length of one meter. It feeds on rodents, birds, lizards. It lives on the territory of Dagestan, Georgia, Armenia, where it is better known as a house snake. Also found in Syria, Bosnia and Herzegovina, Israel, on the Balkan Peninsula.

A cat snake easily climbs steep cliffs, trees, shrub branches and walls. She clings to the bends of her body for the most minor irregularities, thereby, keeping herself on steep sections, perhaps from here her name appeared. 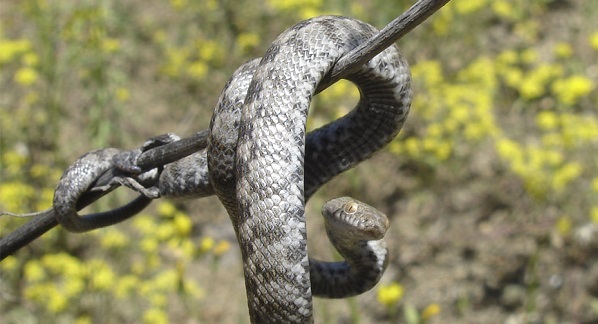 Viper of Dinnik (Vipera dinniki). Dangerous to humans. Reaches 55 cm. Color is brown, lemon yellow, light orange, gray-green, with a brown or black zigzag stripe. The species is interesting due to the presence of complete melanists, which are born of normal color, and become velvety black only by the third year. It feeds on small rodents and lizards. It inhabits the territory of Azerbaijan, Georgia, Ingushetia, Chechnya, where it is considered one of the most poisonous. 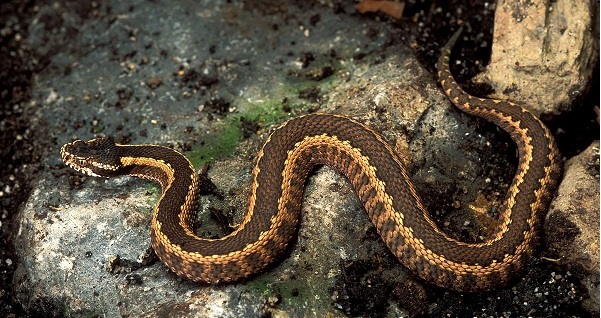 On photo Viper of Dinnik

Kaznakov’s Viper (Vipera kaznakovi) or Caucasian Viper. Dangerous to humans. One of the most beautiful vipers in Russia. Females reach 60 cm in length, males — 48 cm. In the diet of birds, small rodents. They are found on the territory of the Krasnodar Territory, Abkhazia, Georgia, Turkey. 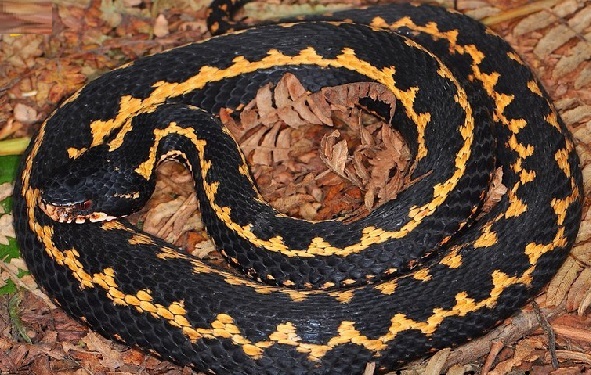 Nikolsky Viper (Vipera nikolskii), Steppe or Black Viper. Dangerous to humans. Can reach 78 cm in length. The menu consists of frogs, lizards, and sometimes fish or carrion. It inhabits forest areas throughout the European part of the Russian Federation. Meetings are described in the foothills of the Middle Urals. 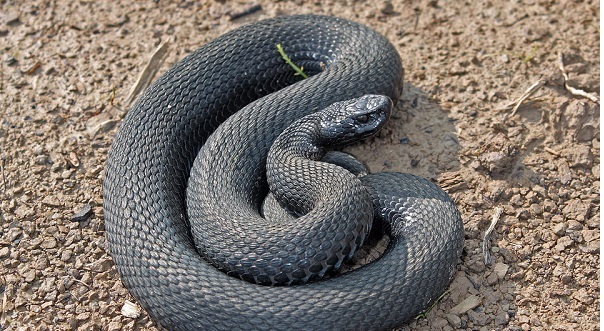 Levant Adder (Macrovipera lebetina) or Gyurza. Extremely dangerous for humans. Known specimens with a maximum length of 2 m and weighing up to 3 kg. The color depends on the habitat and is possible as a dark monophonic, and grayish-brown, with a complex pattern of small markings, sometimes with a purple tint. It feeds on birds, rodents, snakes, lizards. In the diet of adults there are small hares, small turtles. Habits in the territory: Israel, Turkey, Afghanistan, India, Pakistan, Syria, Central Asia.

In Kazakhstan, almost exterminated. Due to its endurance and unpretentiousness, it was more often than other species used in animal farms for milking. The unique gurzy venom helped create a cure for hemophilia. 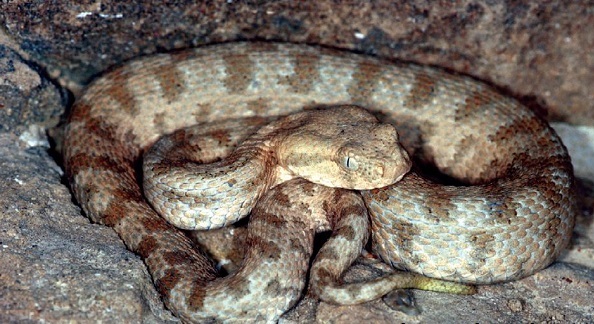 On the photo the Levant Viper (Gyurza)

The names and descriptions of snakes listed in the Red Book of Russia should be studied not only in a biology class. Indeed, despite the fact that some of them are poisonous, others are destroyed only because they look like vipers