Snow leopard animal. Way of life and habitat of a snow leopard

In translation from a Turkic adverb the snow leopard (or irbis) is translated as «a snow cat». This regal noble animal by right carries the name «owner of mountains». 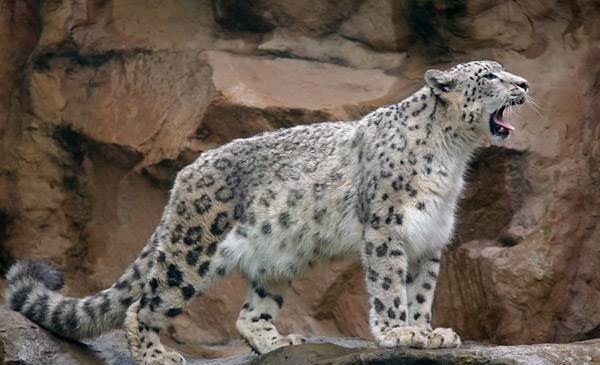 Features and habitat of a snow leopard

The snow leopard – a cat quite large, with very beautiful dense fur, a silvery and smoky color, on each side wool brightens, upon transition to a belly becomes white. Easy, almost inaudible yellowness can sometimes look through.

On all body of an animal large black rings sockets, small spots and specks are scattered. Such color plays a role of a peculiar camouflage: the predator excellently masks on stony slopes, among snow and ices, becoming imperceptible for the future production. 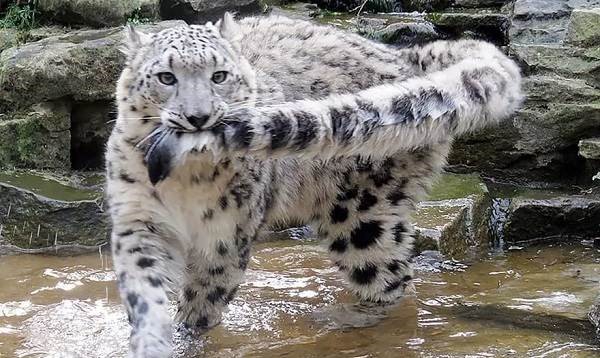 Interesting feature in the description of a snow leopard: his smart long tail will be envied by the majority of the cat’s – its length equals to length of a trunk and makes more than 1 meter. Average height – about 60 centimeters, thus females more small than males. For the rest, individuals of an opposite sex a little than differ externally.

It is much easier to see a snow leopard on a photo, than in wildlife: the animal prefers to lead a reserved life and the snow leopardusually in remote to the person places lives: in gorges, on high rocks, at mountain Alpine meadows.

In a warm season can conquer peaks more than 5 thousand meters high. In the winter often goes down in search of production. This is the only mountain cat among all family cat’s. 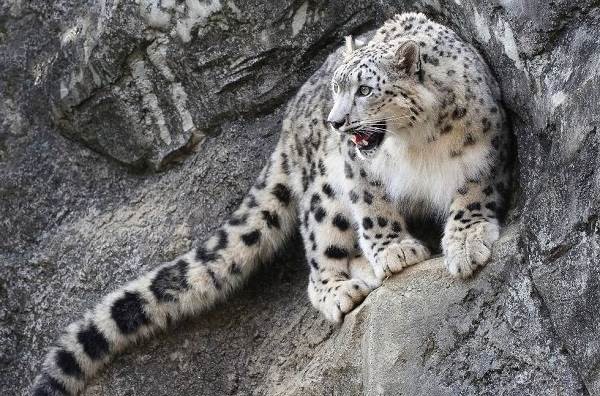 Imperceptible character of a predator, nevertheless, didn’t save it from a sad fate: the most beautiful appearance of a snow leopard played with it a dirty trick – the animal too often fell a victim of poachers who arranged hunting for the sake of production of fur.

Now a snow leopard the animal rare, in some areas remained only on 1-2 individuals. The snow leopard is included in the list of the animals of the Red List who are on the verge of disappearance. Dwelling area: massif of Mongolia, Tibet, Himalayas, Pamir, Tien Shan, Kazakhstan. In Russia – Highlands Altai.

Character and way of life of a snow leopard

The snow leopard – an animal mainly night, in the afternoon he sleeps off in shelter: in a cave or on a tree. Can often sleep days and even more. On hunting goes in twilight or in the dark. 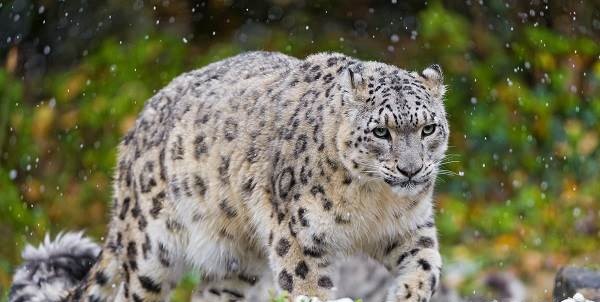 Avoids people, at a meeting will hide rather, than will attack. Only the animal infected with rage can provide to the person serious danger.

Thanks to the wide developed paws, excellently moves on rocks, can overcome even very steep slopes and remote narrow rocky ledges. Dexterously moves on deep snow and ice.

Lives in the basic alone, occasionally unites in groups for hunting. Generally during the periods of reproduction and cultivation of young growth. One animal occupies the territory more than one hundred square kilometers. 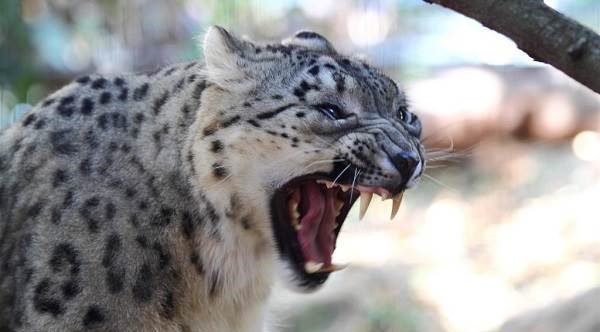 Can suffer the neighbourhood of females, but not other males. If it is enough food, doesn’t move away from a den on long distances, in an opposite case, can leave from the house on tens kilometers.

Snow leopards are quite playful, often somersault in snow, like to luxuriate on the sun. The voice of a snow leopard is more similar to cat’s purring. This animal hushfully, not loudly growls. Expresses aggression hissing, rumbling. 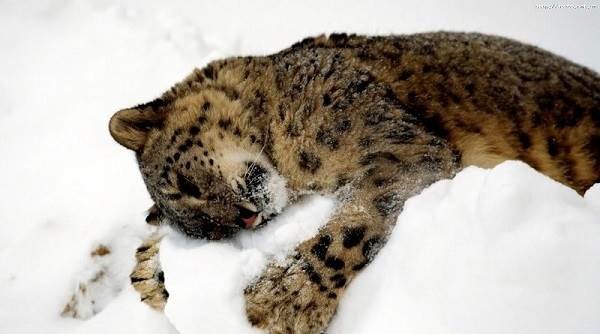 Food of a snow leopard

Snow leopard snow leopard excellent hunter: thanks to a fine feeling and an acute eyesight, they easily track down production even in full darkness. Can catch the victim in two ways: he or quietly creeps and at the last minute seizes claws and teeth, or the moment waits and attacks, making the dexterous and verified jump on distance from 5 to 10 meters. Can watch long enough for production in shelter.

The snow leopard animal strong and powerful, he is able to cope alone with such large hoofed animals as a yak, the roe, a mountain goat, архар, soiled. Can fill up a boar or in rare instances even a bear.

If large animals are inaccessible, the snow leopard eats smaller hares, groundhogs, partridges. Quite often attack and a livestock, especially in winter hungry time. One large catch lasts for it for some days. 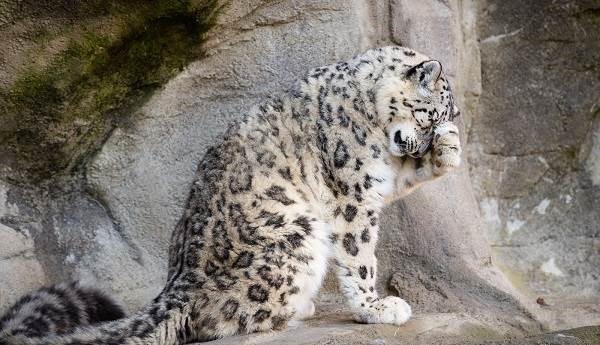 Reproduction and life expectancy of a snow leopard

In the early spring in habitats of snow leopards it is possible to hear booming night songs, something reminding singing of March cats, only more sonorous. So the male calls a female.

They meet only for pairing, further cares of cultivation of posterity lay down on a female. Young animals are ready to reproduction at the age of 2-3 years. Bears posterity a female a little more than 3 months, kittens are born at the beginning of summer. In reliable warm shelter appear from two to five kids. 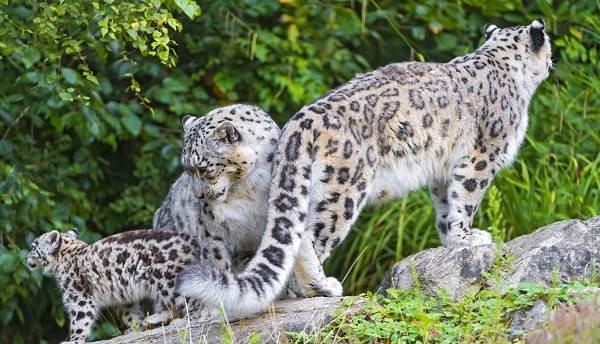 Kittens, as well as the majority cat’s, blind and helpless are born. Of the size of a small domestic cat. Start seeing in 5-6 days. At the age of about two months even more often get out of a nest to play on the sun. In the same time mother starts luring them small mammals.

Young snow snow leopards play with each other and with mother much, arrange hunting behind her tail or catch up with each other with amusing hissing. These games are very important for further development of kids: so they prepare for adulthood, are trained in hunting skills.

Gradually mother trains kids in hunting: to six-month-old age they spend in joint tracing of production much time. The female long enough accompanies the grown-up children: in general, to adulthood they are ready to the next spring 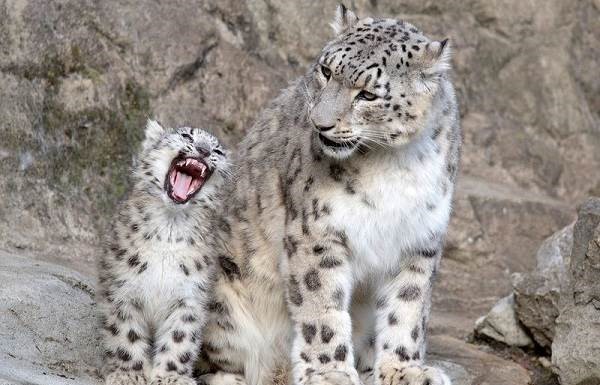 But cases when they live are frequent and hunt in common and till 2-3 years. Life expectancy of a snow leopard in the wild nature reaches 20 years, they can live in zoos more long.

The first snow leopards appeared in Moscow Zoo more than 100 years ago, in 1871. First employees faced a large amount of difficulties in the maintenance of this wild animal: snow leopards perished from diseases, didn’t breed.

Now these rare animals successfully contain and breed in many zoos of Russia and Europe that helps to keep population of these animals. Completely manual snow leopard lives in the Leningrad zoo Babbling.

Beaver is an animal. Beaver’s lifestyle and habitat