The Latin name of the representatives of the arachnid order “Solifugae” is translated as “fleeing from the sun”. Solpuga, scorpion wind, fever, phalanx — different definitions of an arthropod creature that only looks like a spider, but refers to omnivorous animals. This is a real predator, meetings with which can result in painful bites. 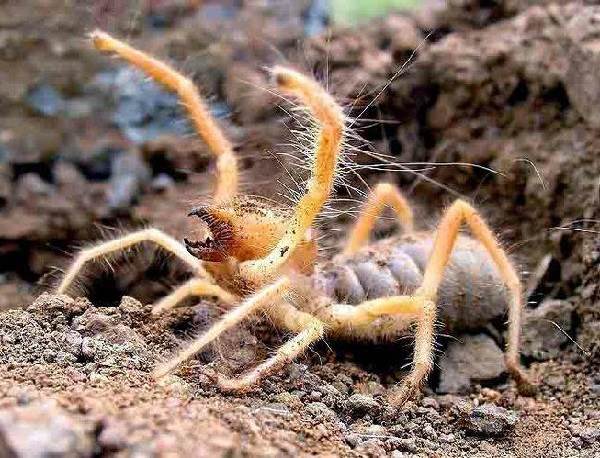 About solpugas piled a lot of fiction. In South Africa, they are called hairdressers because they believe that the underground nests of the inhabitants are lined with the hair of people and animals, which are cut off by powerful chelicera (mouth appendages). Description and features

Central Asian predators are approximately 5–7 cm long. Large spindle-shaped body. The head is covered with a chitinous shield with large bulging eyes. On the sides of the eyes are underdeveloped, but they react to light, the movement of objects.

10 limbs, body covered with hair. Front tentacles-pedipalps are longer than paws, they are very sensitive to the environment, they serve as an organ of touch. The spider instantly reacts to the approach, which makes it a great hunter. 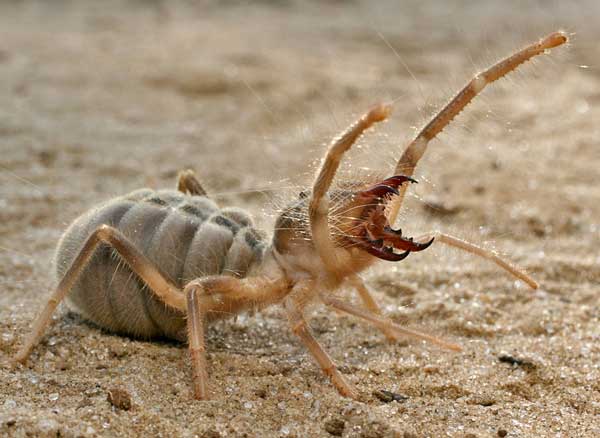 The hind limbs are equipped with claws and villi-suckers, allowing you to climb on vertical surfaces. The running speed is up to 14-16 km / h, for which the spider is nicknamed the scorpion wind.

Interestingly, the structure of the solpuga is generally very primitive, but the tracheal system in the body of a predator is one of the most advanced among arachnids. The body is yellow-brown in color, sometimes whitish, with long hair. individuals of dark color or motley coloring are rare.

Awesome tentacles and fast movements create a frightening effect. Solpuga in the photo looks like a little shaggy monster. The hairs on the body are different. Some are soft and short, others — coarse, spinous. Individual hairs are very long. 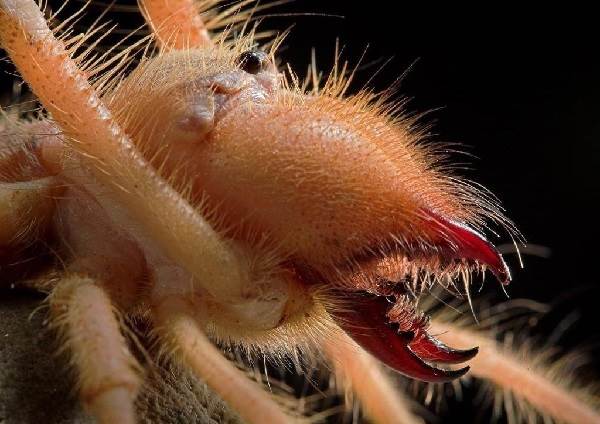 The main weapon of a predator is large chelicera with tongs, resembling the claws of crabs. From other spiders, Solpugu is distinguished by the ability to bite through a human nail, skin, small bones. Chelicera are equipped with cutting edge and teeth, the number of which differs in different species.

Salpuga spider is a typical inhabitant of the steppes, deserts of tropical, subtropical zones. Sometimes found in wooded areas. The main area of ​​distribution is South Africa, Pakistan, India, the North Caucasus, the Crimea, and Central Asian territories. Night predators know the inhabitants of Spain, Greece. The common form is familiar to all residents of hot spots and deserts.

Most nocturnal hunters hide during the day in the abandoned rodent burrows, among rocks or in their underground nests, which are dug with the help of chelicera, discarding soil with their paws. Light attracts them with a cluster of insects. 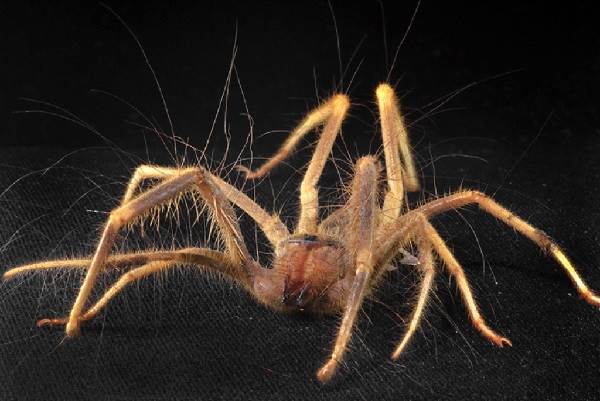 Therefore, they crawl on the reflections of the fire, the rays of the flashlight, to the lighted windows. There are species that are active during the day. Such sun-loving representatives in Spain were called «solar spiders». In terrariums solpugi love to bask in the light of ultraviolet lamps.

The activity of the spiders is manifested not only in fast running, but also deftly moving vertically, jumping a considerable distance — up to 1-1.2 m. When meeting with the enemy, the Solpugi raise the front part of the body, the claws open and direct towards the enemy.

Harsh and shrill sounds give the spider determination in the attack, frightening the enemy. The life of predators is subject to the seasons.

With the arrival of the first cold weather, they hibernate until the spring warm days. During the hunt, solpugs make characteristic sounds that look like gnashing or piercing. This effect appears as a result of friction against the enemy.

The behavior of animals is aggressive, they do not fear either man or poisonous scorpions, they are even bellicose to each other. Lightning movements of hunters are dangerous for the victims, but they rarely become someone’s prey. 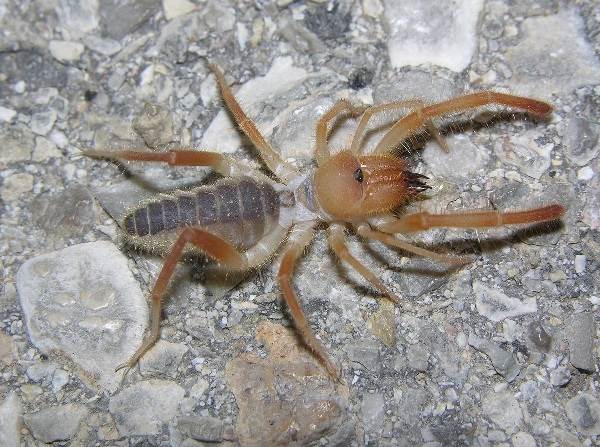 It is difficult to expel a spider who has run into the tent, you can sweep it out with a broom or crush it on a hard surface; Bites need to be washed with antiseptics. Solpugs are not poisonous, but they carry infections on themselves. If the wound is festering after a spider attack, antibiotics will be required.

Solpugi detachment consists of 13 families. There are 140 genera, almost 1000 species. The army of thousands of predators spread across many continents, except 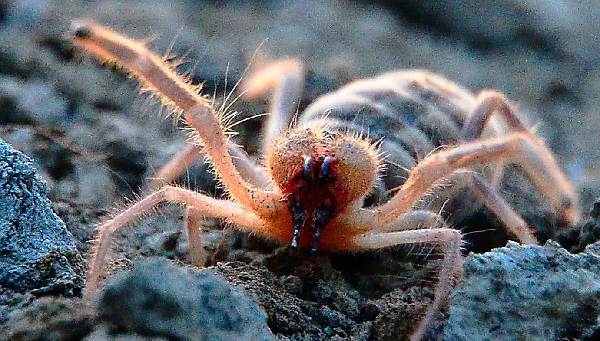 Among the most famous species: 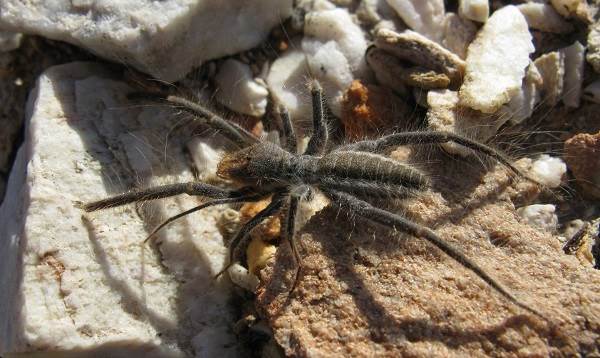 The voracity of spiders is pathological. These are real predators who do not know the feeling of satiety. Food becomes large insects, small animals. Woodlice, millipedes, spiders, termites, beetles, insects fall into the diet.

Solpuga phalanx attacks all living things that move and correlate with its size, until it falls from overeating. In California, spiders ruin hives of bees, coping with lizards, small birds and small rodents. The victims are dangerous scorpions and the solpugs themselves, capable of devouring their couple after copulation. 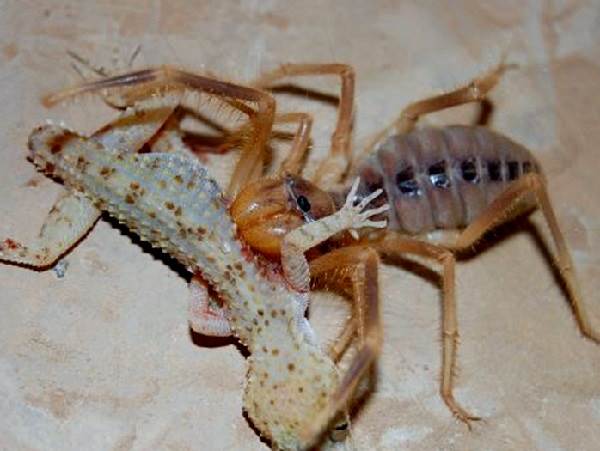 Spider captures lightning fast. To devour the carcass is torn to pieces, chelicera knead it. Then the food is moistened with digestive juice and absorbed by salpuga. After the meal, the belly grows considerably in size, the hunting excitement subsides for a short time. Lovers contain spiders in terrariums should monitor the amount of feed, as the phalanges can die from gluttony.

With the onset of the mating season, pairs approach each other according to the luring odor of the female. But soon the solpuga, bearing offspring in the oviducts, becomes so aggressive that it can eat its partner.

Enhanced nutrition contributes to the development of cubs in the womb. In the lurking mink, following the embryonic development, there is first deposition of the cuticle, the eggs in which the babies matured. The offspring is numerous: from 50 to 200 heirs. 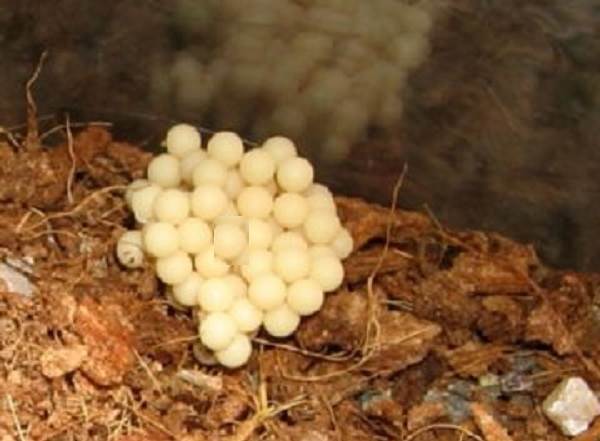 In the cuticle, the young are still, without hairs and signs of articulation. After 2-3 weeks, babies become like parents after the first molt, acquire hair growth and straighten all limbs. The ability to move independently gradually develops into motor activity. Solpuga phalanx protects the young, delivers food until the offspring is stronger.

Information about the life expectancy of arthropods is missing. Fashion start predators in terrariums appeared recently. Perhaps a close observation of the habitation of phalanges will open new pages in the description of this sandy tropic inhabitant

Interest in an unusual animal is manifested in the appearance of the characters of computer games, intimidating and enticing images. Versus Solpuga lives on the Internet. But this predatory spider can be found only in wildlife.