Peculiarities and habitat of the shrew

Sorex is of small size (from a few centimeters, in rare cases — up to 1 decimeter), a small animal belonging to the family of shrews, weighing only about a dozen grams. 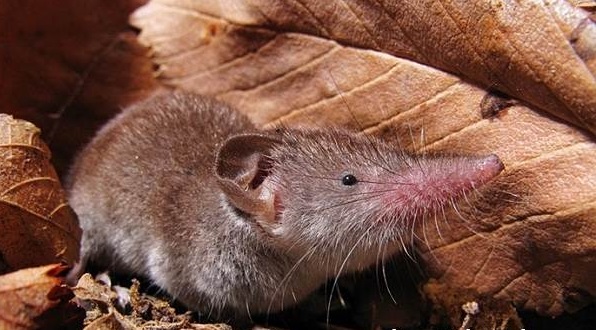 As you can see in the photo , the shrew looks like a field mouse , differing from it only with an elongated muzzle, similar to the proboscis, and a tail, sometimes larger than the body itself, with short hairs.

In addition, the animal has small beads-eyes, white teeth, large hind legs, velvety hair and dark brown, in some cases almost black, color. The top is darker and the bottom is lighter. The animals are extremely common in Northern Europe and belong to the most numerous mammalian genus.

They love to settle in the bushes and thickets of grass, and live, as a rule, in the underbrush. In some cases, like mice , they can settle in people’s homes.

Common Sorex especially caught on in areas with a temperate climate. The animal can often be observed in the shade of mixed and deciduous forests, where it prefers wet, covered with plant debris, areas.

The Arctic shrew is a resident of Siberia and tundra, also found in the far north of the Americas. The animals molt a couple of times a year (just at the junction of the cold and warm cycles of the northern climate), changing the fur from bright and dense in the winter months to more rare wool of inconspicuous tones at a favorable time of year. The color of the fur itself is interesting and has three shades of brown, varying from light to grayish and very dark. 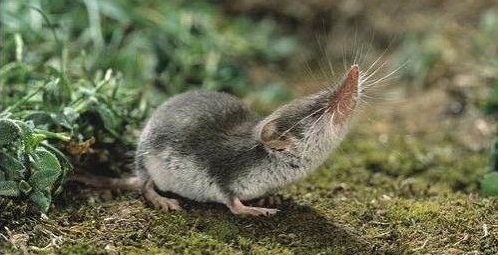 The giant Sorex with a body length of 10 cm is found in the north of the Korean Peninsula, the Far East and China. The population size of this animal is sharply reduced, in view of this state of affairs, measures are being taken to protect it. 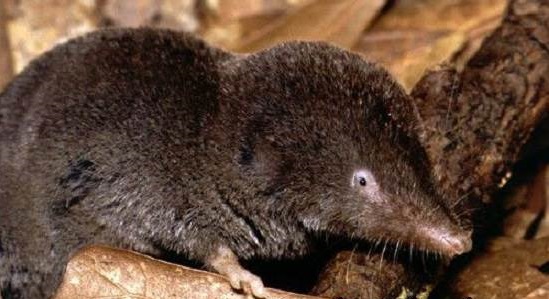 In the photo is a giant shrew

Small shrew is much smaller and reaches a length of not more than 6 cm, and often much smaller. It is found in the Caucasus, in Kyrgyzstan and in Siberia. Usually has a coffee-red color. The smallest (about 4 cm) is a tiny shrew , which is not for nothing considered to be the smallest representative of mammals in Russia .

In the photo small shrew

The nature and lifestyle of the shrew

Unlike gryzunov- mice , Sorex relates to insect-mammals. In addition, she does not dig minks, but lives in forest litter: the ground covered with fallen leaves and faded last year’s grass.

In winter, the animal does not hibernate, therefore, in the active state, it can be found at all times of the year. The shrew is cautious, and its main life goes on at night. But it can carry out its activities at any other time of the day, especially by activating a few hours before sunset.

It is capable of making winding passages in soft soil, under snow, and in loose scaffolding of forests, doing this with the help of a proboscis and legs. Sometimes it uses rodent moves for its progress: moles , voles, mice .

The little shrew shrew differs in unimportant vision. And the main organs that help her survive in this world are touch and smell. Moreover, at night, she is helped to navigate such a special and unique device, given to her by nature, like echolocation.

A similar addition to other sense organs, which distinguishes it from many other living beings, helps it not to become entangled in the darkness among grass stalks and plant roots.

In search of what it seeks, the shrew emits sound impulses. And the ears of the animal, having a peculiar structure, receive in response the necessary signals, giving it the necessary information about the features of the surrounding world.

The animal, despite its modest dimensions, is extremely voracious, consuming food twice its weight in a day. And she finds food by actively rummaging in the upper layers of the soil, which has the misfortune of annoying strongly to avid gardeners and gardeners. But it is better not to rush into anger at such neighbors as shrews, because animals can help get rid of many pests: caterpillars, weevils , leaf beetles, click beetles , cockchavers , bear cubs , slugs.

Moreover, the shrew is rarely seen on a person’s eyes because it operates mainly at night, actively crawling in the garbage. It feeds on ground invertebrates: snails, centipedes, spiders and earthworms.

In the forest litter, teeming with small living creatures, where she lives, it is not difficult for her to get food during favorable periods. Also, the shrew is quite capable of eating bird droppings, carrion and plant seeds, which usually form its winter ration. 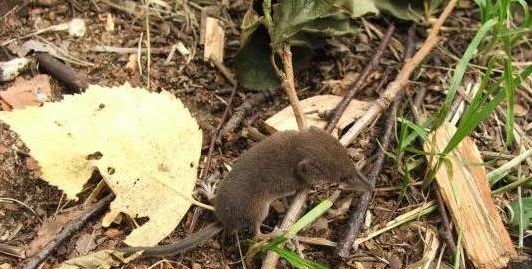 While eating, the animal, as a rule, relies on all four legs, but in some cases, for example, eating slippery worms or beetles, it can use its front paws to hold its prey. Often, in search of something edible, the shrew climbs into the trees, climbing the trunk, clinging to the irregularities of the bark, to feast on the eggs of a nun butterfly or an unpaired silkworm.

To obtain food, the shrew is able to attack even such large, as compared to its size, animals, like small rodents and frogs. And in case of victory, he eats them almost entirely, leaving only the skins and bones of his victims. Many frogs become prey for the shrew during hibernation, and when the snow comes down, only their skeletons, thoroughly gnawed, can be found on the forest floor.

The reproduction period of the animals begins in early spring, usually in March, and ends in late autumn. During this period, the mother shrew is able to produce several broods (from two to four), each of which adds to the number of insectivorous 3-9 pups to the number of this species.

Pregnancy of an animal proceeds about three-four weeks. And by the end of the gestation period, the shrews build a nest among the roots of trees or stones. They build a dwelling for their future children out of leaves and moss, for convenience they are covering it with something soft.

Small shrews develop rapidly, although they are born completely blind and with an unprotected, naked body. Over the next three weeks, from the moment they are born, they feed on mother’s milk.

After two weeks, the pupils’ viewing pupils open, and they begin to coat with hair. And after 3-4 months they themselves are able to bring posterity. The animals live for about 18-23 months, but during this time they are able to multiply strongly.