A small fussy animal, now and then as if emerging from meadow grasses, and immediately disappearing into them again, this is a speckled ground squirrel. 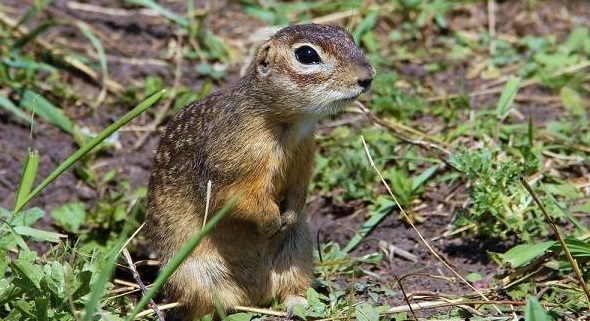 It is very difficult to make a photo of a speckled ground squirrel in the natural conditions of his life, since the animal is not in a single position for a minute. Even when the gopher «hangs» over the grass, its nose, the entire muzzle is constantly moving, and the body is in a tense state.

Moreover, the animals tend to disappear just at the moment when the photographer presses the trigger. Therefore, the majority of images of gophers in nature are obtained automatically, without human intervention.

This animal is one of the smallest ground squirrels, the length of its fluffy little body reaches only 18-25 cm, and the weight very rarely reaches half a kilogram. Besides the fact that the animal is really small, it is also short-tailed. The tail of the gopher never exceeds a quarter of the length of its calf, as a rule, the average length of the tail is from 3 to 5 cm. 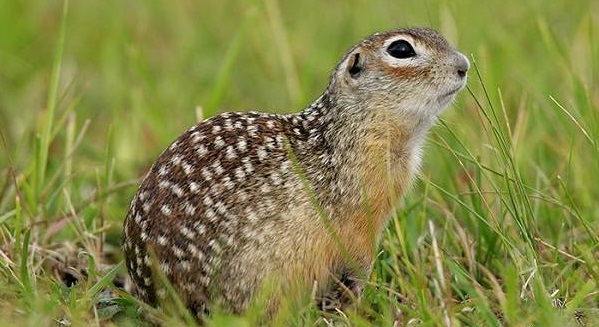 Males gophers are larger and brighter than females. In the book pictures, the spotted gopher is often depicted in completely different ways, sometimes light, sometimes red, then brown and speckled, often the illustrations are deprived of any explanation about different colors and generally different appearance.

The fact is that the habitat of the animal is very large, and the color of its fur coat, as well as minor external nuances, directly depend on where the particular gopher lives. For example, the spotted ground squirrel in Belarus possesses brown and marsh-colored wool and white specks, even fullness of the calf and strong legs.

The same animal in the Pridonya steppe is already fawn, with dark specks, rounded thick booty and narrow shoulders, the body looks like a pear, while the hind legs are more developed than the front ones.

Accordingly, some nuances of appearance and color variations of animals directly depend on where they live. Historically, their habitat is the whole of Europe from the northernmost to the southernmost latitudes, especially many gophers were once in the territory from the Danube to the banks of the Volga. 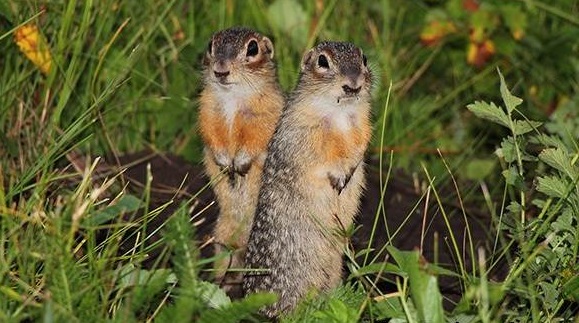 Gophers prefer to live in the steppes, forest-steppe, meadows, in the fields. Most of these animals once were on the heights of «virgin.» Plowing the steppes led to the fact that gophers retreated, and settled on the sidelines of country roads, in forest belts, along the slopes of dry cliffs and beams, in «abandoned» gardens, feral vineyards, and, of course, close to the fields with cereals.

Forced migration led to a drastic reduction in these animals, the numbers dropped to such an extent that they were recognized as a near-extinction species, and in the middle of the last century, the speckled gopher fell on the pages of the Red Book and received “protected” status.

Gopher — animals are highly social, with a developed sense of collectivism. They settle in large colonies, if the territory allows, they are sparse, if the places are small, they are very dense.

Also, the branching and size of the hole, which every adult animal has its own, depend on the availability of space. Gopher burrows dig interestingly enough. Each animal builds a permanent dwelling and, in addition to it, several deceptive temporary shelters. 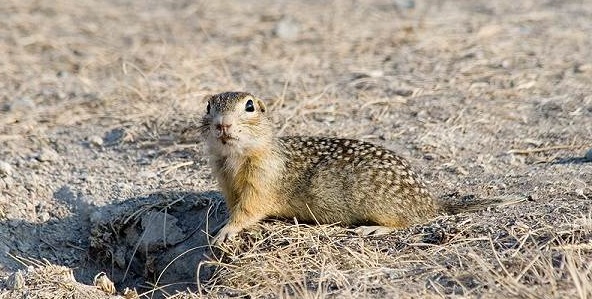 A permanent real “house” has only one entrance, a multitude of troughs, branches, ending with “chambers” of storage reserves, a warmed “room” in which the gopher lives directly — it is located at a depth of 40 to 130 cm climate — the colder the winter, the deeper the hole.

Temporary protective minks are completely different, they do not have sleeping and storerooms departments, but they have several exits. Gophers have them near the places where food is mined. These structures are used by the whole colony of animals, regardless of who their fish was.

Zoologists have been actively arguing for many years, and have not come to a common opinion about whether there is a social hierarchy and organization in the colonies of these animals.

However, despite the fact that scientists can not answer this question, in nature there are gophers living alone. Whether they were expelled from the colony, or whether they are voluntary hermits, it is not known, it is only known that such animals exist.

Gophers live sedentary, constantly in one place, without making relocations due to food. In the absence of food, gophers pass in its search throughout the district and will bring the mined into the hole. 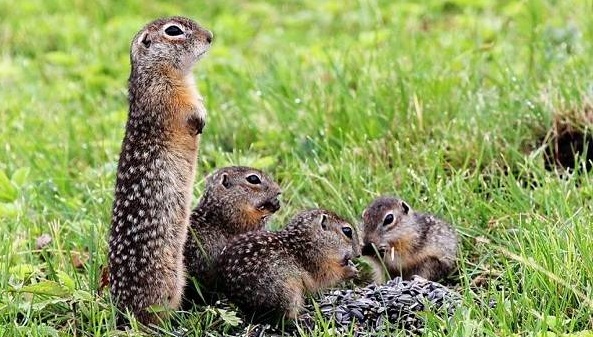 The migration of animals can be forced only by the elimination of their habitats and the threat of life, which happened during the plowing of virgin lands, up to 1980. Animals are active in the daytime, from morning to evening, but only in good weather. If it rains, the gopher will not leave his “house” under any circumstances.

The character of the gopher resembles the character of his distant relative — squirrels. With the only difference that this animal is much less trusting towards a person.

The rest of the gophers and squirrels are very similar — they love their “bedrooms”, constantly warming them, modernizing and even tidying up. They like to lurk somewhere and watch what is happening around, pulling seeds out of the cones or grains from the spikelet.

They do not live in families, meeting with a partner, but not sharing a hole with him and not leading a common life. Carefully sort their stocks and monitor the quality of the food that is hidden for the winter.

Until recently, it was believed that speckled do not eat in winter, and stocks are made in case of bad weather or instinctively. But more recently, with the help of technical observations of a colony of animals in the Rostov (Don) region, discoveries were made that completely refute the previous description, compiled by naturalists of the nineteenth century. 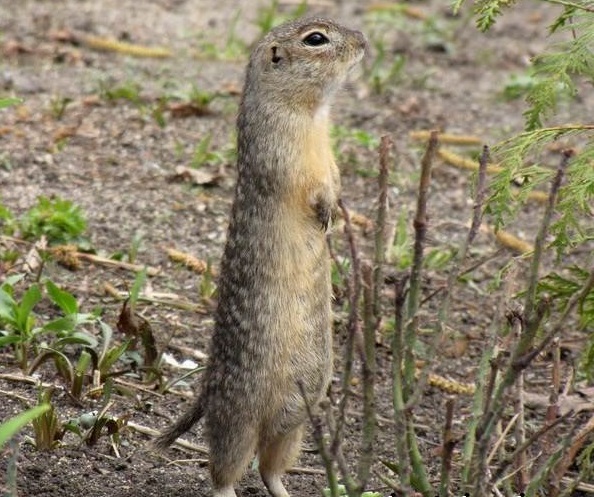 Spotted fluffy animals hibernate, but they do not sleep all the time. When waking up, the gopher bypasses the mink, checks the entrance, if there is a thaw in the yard, it can crawl out for a short walk, after which it eats and falls asleep again.

However, the farther north the climate and the colder the winter, the stronger the hibernation. In areas with severe winters, gophers do not wake up, sleep lasts approximately from September to March, in general, the gopher can sleep for 6 to 7 months.

During this time, its weight is reduced by half, and sometimes, with such a long hibernation, the animal simply dies. Sleeping animals sitting, bent over, hiding his head in the abdomen and covering his nose with a tail.

A speckled ground squirrel description would be incomplete without mentioning its diet. The menu of this fluffy vegetarian includes over fifty names of plants. 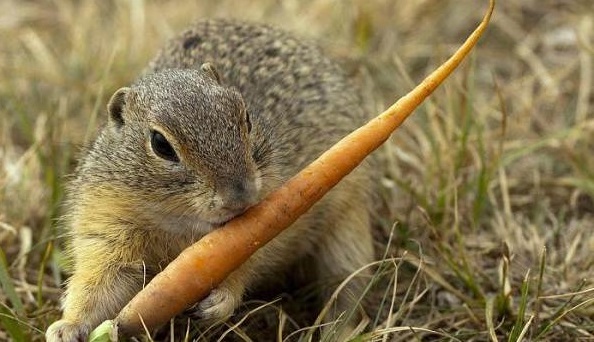 Gophers living in the lower reaches of the Don stock up seeds of apples, eat the apple itself, without drying it, but in the latitudes of Moscow, the animals make forays to summer cottages and arrange the fennel seeds, parsley roots and even carrots in accordance with the varieties.

Near the landings of corn, gophers demonstrate complete love for her, preferring the cobs to the rest of the food and showing real acrobatic wonders when they are harvested.

Although gophers and vegetarians, some of them are not averse to eat beetles. As a rule, animals living outside the colonies prefer to eat protein. There is a hypothesis that it is food addictions that are the reason for their solitude.

However, the counter-argument of such a thesis is the fact that animals often eat their own offspring, and not only at birth, but are also prone to necrophagy — that is, they eat their relatives who have become trapped or wounded. But, at the same time, do not touch those who did not manage to wake up after the winter. 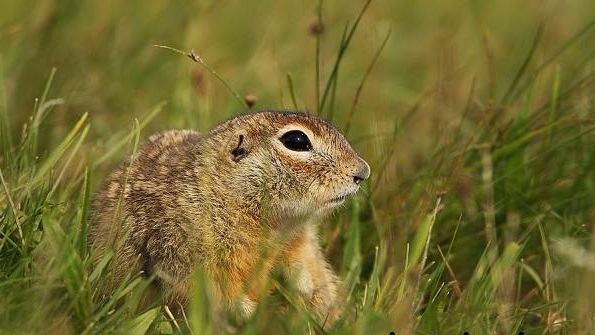 Mating animals in burrows, males come «to visit» the females. This process begins 1-2 weeks after the mass awakening of the colony. Pregnancy lasts about a month, after which from 6 to 10 babies are born, which go into adulthood already in the middle of summer, in late June — early July.

Gophers live a little, from 4 to 5 years, many do not survive the first winter in their lives. However, the facts of the fact that speckled gopher in a zoo rarely do not live up to 6-8 years, and hybrids with other species of ground squirrel in captivity live even longer, are extremely interesting.