Features and habitat of springbok antelope

The variety of antelope species affects many researchers. They can live in a variety of living conditions. All antelopes are ruminants. They first break free food — leaves from trees, and then eat them. Then, at rest, they chew on food. 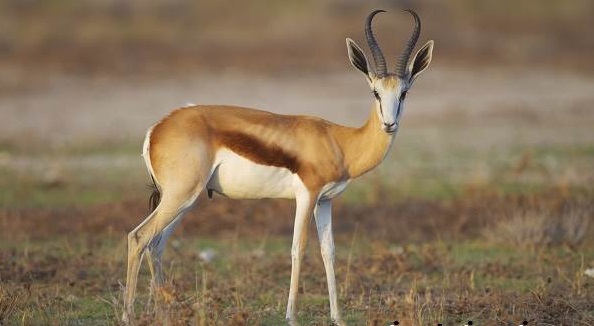 All antelopes have horns — special bone outgrowths that develop on their foreheads. Horns come in different shapes, antelopes use them to fight a rival. These animals include springbok. In southern Africa, it is called «stray goat.»

This African antelope is being studied by many researchers. She has lyre-like horns, on her back she has a dense layer of hair. Translated springbok means «jumping goat .»

It is the only true antelope that lives in South Africa. Antelope can reach speeds of up to 90 kilometers per hour, and jump a height of at least three meters. It is believed that these qualities help him to escape from predators in time. 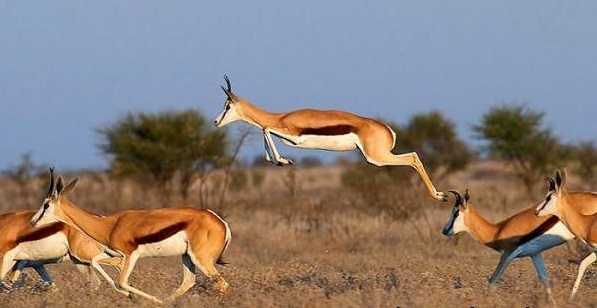 Once upon a time there were many springboks, huge herds of a million individuals each ran across Africa. Organized in the nineteenth century, the mass shooting of animals led to the fact that they became much smaller.

Now in one herd there can be no more than a thousand individuals. Now more or less large concentrations of these animals are found only in the Kalahari, and there are still in national reserves.

Springbok feels best in the desert, where rocky or sandy soil, lonely bushes grow. In the rainy season, it usually prefers to unite with other animals. The herds of kongonis and ostriches gladly become their neighbors, because the springbok with their jumps warns them about the danger. 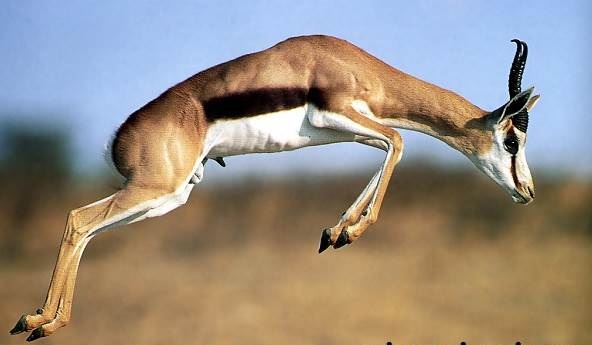 When jumping, the springbok shrinks and in a jump it looks like a cat . And he can jump on any occasion. May see something unusual, may see a trace from the car wheel.

During the jump, the fur on the body begins to sparkle, and a large white stripe is immediately visible. It is noticeable from afar, which is why springbok can warn other animals of the danger.

Often, springbok live on farm land, adjacent to ordinary pets. In this case, they feel more secure. The springbok antelope has an original appearance, and the length of its horns is 35 centimeters. 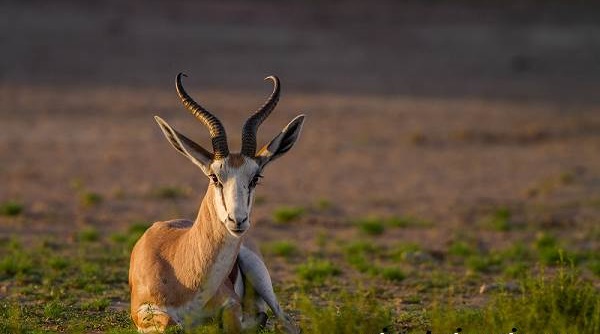 Sometimes the horns can be longer and grow to a length of 45 centimeters. His legs are long and slender, he moves very gracefully. The color of the animal may be different, depending on the species. Often there are chocolate and white individuals. Sandbox springboks are a little less common.

The nature and lifestyle of the springbok antelope

Springbok has a white head, there is a dark thin band near the eyes. His height is about 75 centimeters, and the weight usually does not exceed forty kilograms. Hunting this animal is a great art. The herd of these animals is easy to frighten, so hunters should be able to sneak up silently. 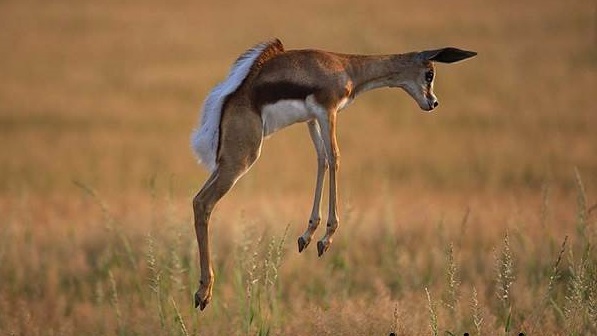 Springbok replaces gazelles, and therefore its herds often cover glades and savannas. It has one characteristic difference — a long strip on the back, which is covered with fur from the inside. Generally it has more fur. These animals have a sense of self-preservation and camaraderie. So, one springbok can help another to rise. They also help to warn other animals about the approach of predators.

It is known that springbok feeds on grass. Also in his diet includes shoots, buds, various bushes. For months, he may not drink water. Antelopes sometimes eat what people give them. In this case, people drive up to them and feed them. Sometimes these antelopes eat reeds. In food, they are unpretentious, mainly in their diet includes grass. 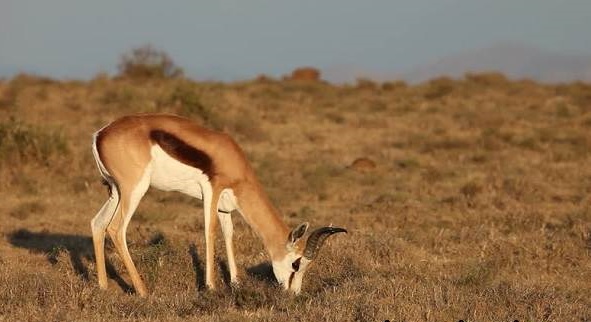 Springbok itself serves as food for many large animals. His meat is delicious. Often the antelope is eaten by lion pride dwellers. Moreover, these antelopes make up the bulk of the lion’s diet . Springbok lambs can become part of the food of large snakes , jackals , hyenas , caracals .

In the period from February to May, the springboks look after each other. 171 day pregnancy continues. Most births occur in November, and the female produces one or two children.

The total number of antelope is now not more than 600 thousand individuals. The most dangerous enemy of the antelope is the cheetah , which is ahead of his speed. Cheetah can make a springbok his prey. 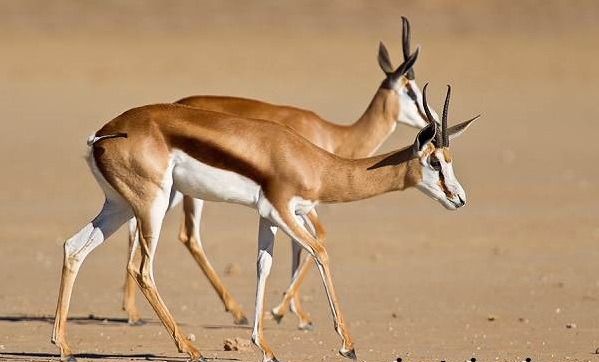 Springbok animal has its own characteristics of reproduction. Each male has its own territory where a group of females lives. He guards this territory without letting anyone in there. When it is time to give birth, females leave the herd, but together they form groups.

There they herd babies and wait for them to grow up. Then, when the lambs grow up, the females bring them to the herd. If lambs are females, then they go to the harem. And lambs, boys go to the male herd. A few centuries ago, millions of herds of springboks went across Africa. The hunters slaughtered them in batches. As a result of this activity, the springboks were largely destroyed. 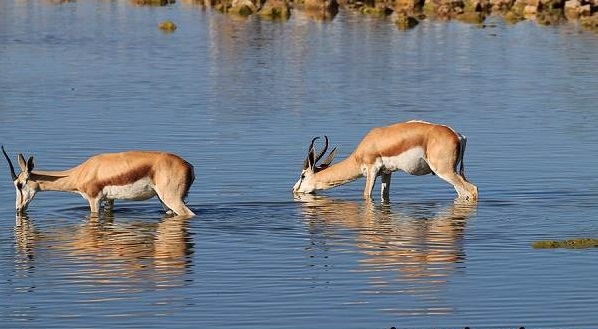 Back in the late 19th century, huge herds of springboks migrated across Africa. They could be 20 kilometers long and 200 kilometers wide. Such herds were dangerous for many animals, including lions and cheetahs, because they could just be trampled along the way to the watering place.

Therefore, large predatory animals sought to bypass the herds of springbok side. The reason for this migration of antelopes is considered unexplained, since they have no sharp need for drinking. It is believed that the sun’s radiation was unusually strong in that year.

This beautiful animal adorns the coat of arms of the Republic of South Africa. The authorities of this republic have largely taken care to revive the springbok population. Now the hunt for him again allowed, but it needs to get a license. 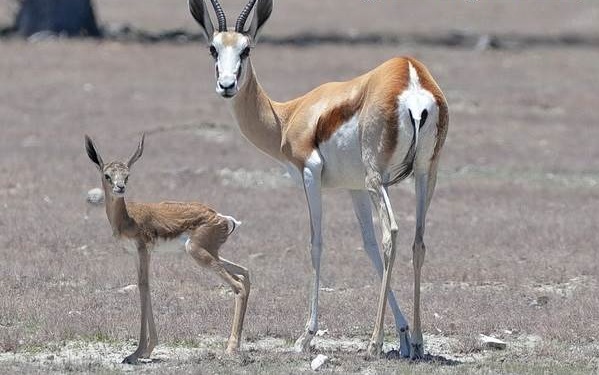 In the photo springbok with a cub

There are also hunters from Russia who want to hunt an antelope. The conglomeration of the antelope is reborn, and soon in the South African savannas they will again see the rows of springboks. All this is very pleased hunters and lovers of wildlife.

The protection of animals from the wild is now one of the most urgent tasks for people. Therefore, antelope populations also need protection.

Given that many species of antelope have already disappeared or are listed in the Red Book , the springbok needs protection. Therefore, the task of each of us is to disseminate useful information about the method of protection of these useful animals.