“Protein, tell the protein. What thought in silence.
Maybe you have forgotten where the nut was buried in the fall … »

Fabulously beautiful jumper from the order of rodents of red color of squirrel is known to each of us since childhood. A huge number of poems are dedicated to her, she is the heroine of many folk tales, she is puzzled and songs are sung about her. 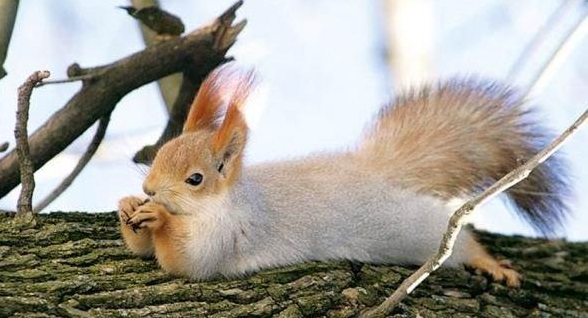 It is hard to say when and where this true love of a man for a squirrel came from. It is only known that all this has been going on for a long time and nothing has changed in our time. These playful and surprisingly fast animals admire everything from small to large in parks, where they boldly jump from branch to branch in search of food and new sensations.

This beautiful animal is difficult to confuse with anyone. The squirrel is small in size. The length of her body usually reaches from 20 to 40 cm, and weight up to 1 kg. Her plush furry tail has a length of body. The ears of the squirrel are small, in the form of brushes. In the coat color red color prevails, but closer to the winter gray and white tones are added. 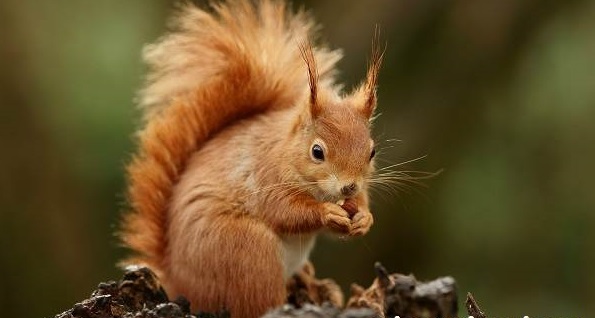 In the summer, the coat is short and coarse, and in winter it becomes soft and fluffy. Closer to the North, you can see completely black squirrels. Animals can jump a distance of 4 to 10 meters. Their big and fluffy tail serves them while driving, helps to adjust the movement when jumping.

These wonderful animals live everywhere except in Australia . For them, the main thing is to have groves, a dense forest, dense parks. Squirrels too sunny places for some reason bypass. At the expense of home this animal is very thoughtful.

They either arrange a house in the hollows of trees, or build a nest on a tree near the trunk, beforehand worrying that the dwelling is protected from difficult weather conditions. 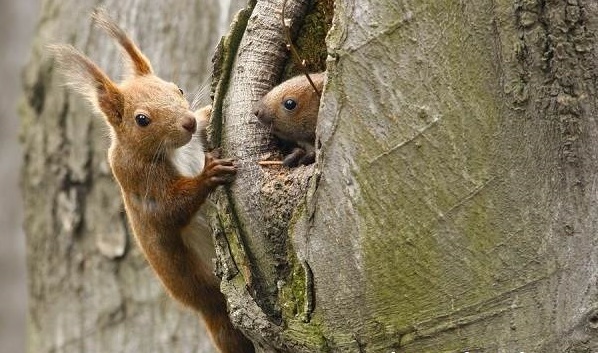 Twigs, moss, old bird’s nest are building materials for squirrel nests. In order to bond all this among themselves, clay and earth most often serve them.

A distinctive feature in their nest is two exits, the main one being the main and the spare, as a strategic exit during a possible danger. This fact indicates what kind of squirrel is an animal , it is friendly, but not so trusting.

Squirrel is an animal that is considered very intelligent. And not only double output is this proof. They are preparing for winter ahead of time, while storing their own food. Basically, they bury the nuts in the ground not far from their dwelling or simply hide them in a hollow.

Many scientists are inclined to believe that due to the fact that the memory of squirrels is not very good from many of them hidden nuts, which proteins sometimes forget, trees grow. 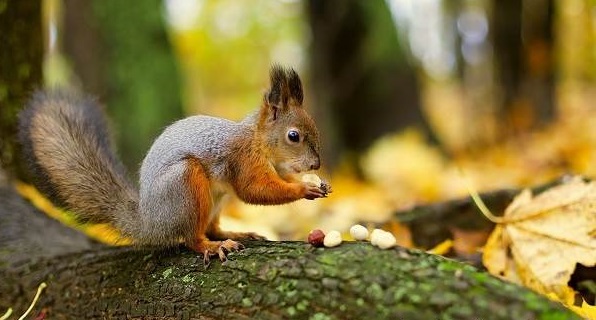 They can dig a newly planted plant in the hope that it will be possible to extract seeds from under the ground. Can be occupied without hesitation and fear in the attic. They easily come in contact with a person if they see food in his hands and can take it endlessly, hiding in the hollow.

Squirrels who live in city parks, have long learned for themselves one truth, that a person is a source of nutrition for them. But feed them with hands is undesirable. Often they can be sick with plague or other diseases that can harm human health. Even if there is no disease, the protein can simply bite very painfully. They skillfully and skillfully crack nuts. Watching this is a pleasure. 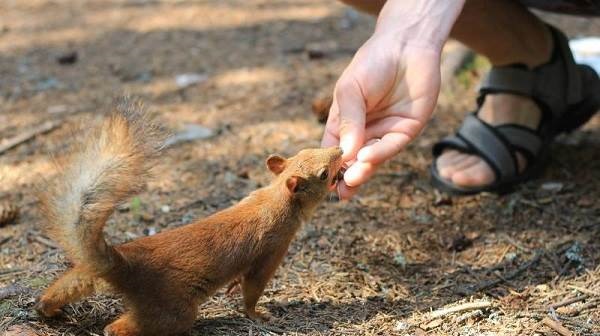 In addition to the fact that a protein is a useful animal, it can also cause some harm to a person. Their teeth are very strong and can gnaw them with protein everything. If they live close to a person’s dwelling, it can be a complete disaster.

In order for the squirrels not to harm in the basement or on the hill and not to spoil the property in those places it is desirable to put the skins of animals. Scarecrows do not help. From the skin emanates the smell of the animal and the protein is in some way frightening.

Even in severe frosts, squirrels do not leave their home. It happens that they gather in one hollow of three or four beasts, close the entrance with moss and warm themselves, thus escaping from the bitter cold. 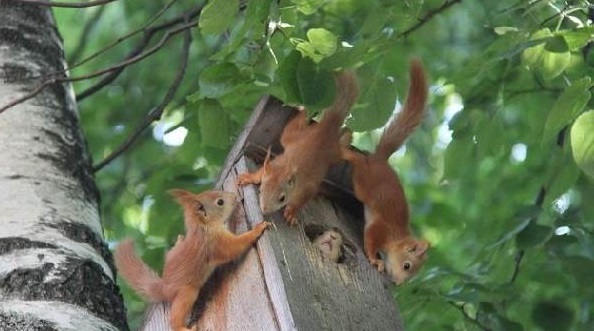 Although they have a warm fur coat, in frost below 20 degrees they do not leave their nests. They can sleep at this time for days. And only during the thaw out of the hollow to collect the cones and replenish their grocery stock.

In the case of lean seasons, squirrels in whole streams move in the direction where there is more food. The squirrel is very agile and nimble. They are cautious and careful, their nest or hollow is difficult to notice.

Domestic proteins recently are not uncommon. They are bought in pet stores. But often little squirrels are fallen from a hollow and left to live at home. Anyone who has decided to start this animal should remember that this is an emotional animal and subject to stress. In such situations, the protein can get sick. 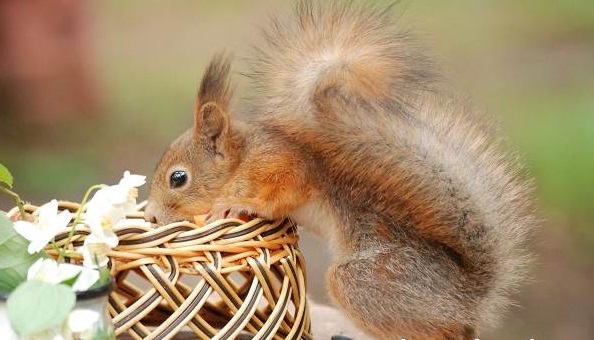 For home squirrels, you need to build a small aviary or put it in a cage. But from time to time it is necessary to let her run around the apartment without leaving her unattended.

This is a fairly independent animal, which at home is not quickly accustomed to humans. It takes a long time for the squirrel to give itself at least just a stroke.

Protein prefers plant foods in the form of nuts, seeds, mushrooms, berries. But she also likes eggs, frogs and insects. The animal collects a lot of fungi, stringing them on a branch near the hollow.

The vitality and complete life of the protein depends entirely on the availability of food. The more reserves they have and the calorie they are, the better the protein feels and the healthier it is.

Adverse weather conditions cause the protein to eat up all its food stocks. This leads to the death of the animal. Squirrels who live in parks with this a little easier because a person always comes to the rescue.

Reproduction and life expectancy of protein

March and April for the mischievous squirrels comes the mating season. Males crowd in dozens around one female, trying to win her favor. Very often there are fights. The female chooses the strongest and babies are born from their copulation, usually from two to eight.

They are blind and completely helpless. Initially, for half a year they feed on mother’s milk. After the transition to the usual feeding of food they are parents in turn. 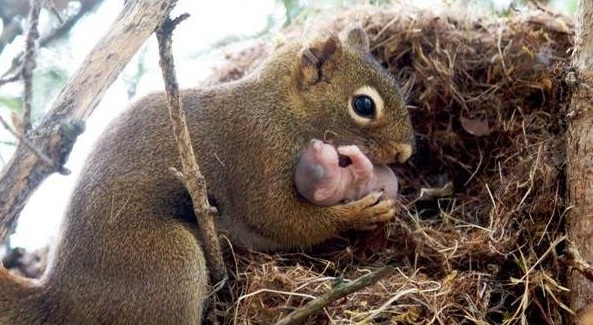 After two weeks, squirrels are covered with hair, and it becomes clear what color of protein , and after a month they open their eyes. After the performance of the babies of two months, they are ready for independent living and can get their own food.

In captivity, animals also breed, but with due care. In nature, squirrels live from two to four years. At home, the period of their life reaches up to fifteen years.