Very cute little animals “belovedki” or stone martens are the only marten who are not afraid to settle near people. Although the closest relatives of these curious animals are sables and forest martens, with their habits the beloved one resembles a squirrel, it can be easily found in parks, in the attics of houses, near sheds with poultry. 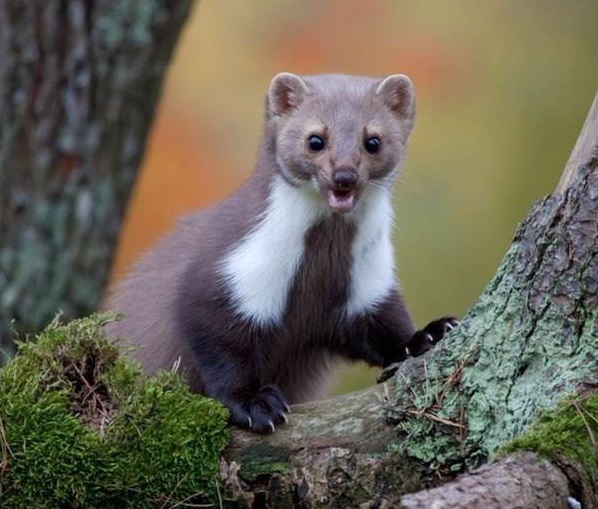 Features and habitat of stone marten

Stone marten lives almost everywhere, its territory is the whole of Eurasia, and in the United States the animal is bred specifically for the purpose of organizing «fur hunting.»

The animal feels great in any temperate climate, from the coldest to almost hot — martens live in Ciscaucasia, in the Crimea, in Belarus, in Ukraine, and so on. But large populations where the snow lasts a long time, which these animals adore. 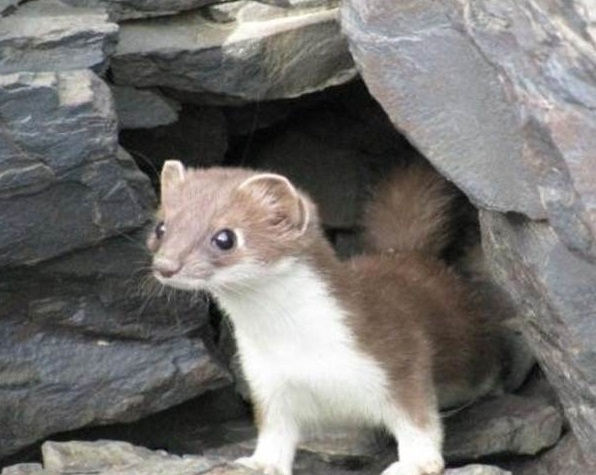 In general, the stone marten in the photo — and telephoto lenses does not react, to capture it is not difficult. Quietly allowing a person to come around, this animal is able to catch and eat feedings thrown by people, for example, meat balls or rolled bread. In the German parks for the martens are hung trough, just as for squirrels.

Many people call this animal “stone forest marten,” but this is not entirely correct. The pine marten is a different species, stone martens prefer to settle not in dense forests, but in areas with separate trees, shrubs and fields, avoiding the areas covered with dense forest. She likes to settle in a rocky landscape, for which she received her name.

The animal is very curious, social in relation to everything new, which often destroys the representatives of this species. There is no difficulty in catching the stone marten with the help of a bait or trap.

Even the meat is not necessary. For a slice of cinnamon bun and camphor flavor, marten will go anywhere. This property of the animal has been used by hunters for fur for centuries. 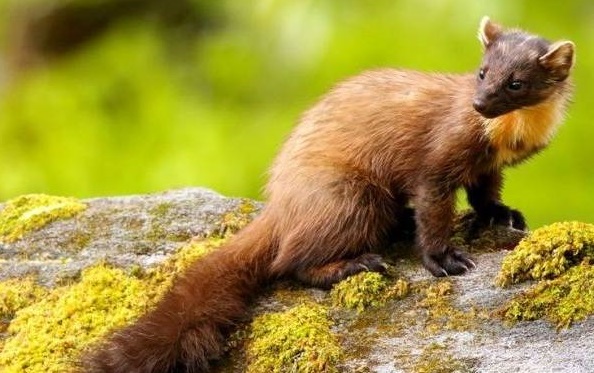 Zoologists have counted and recognized today four subspecies of stone marten, dubbed them by habitat: 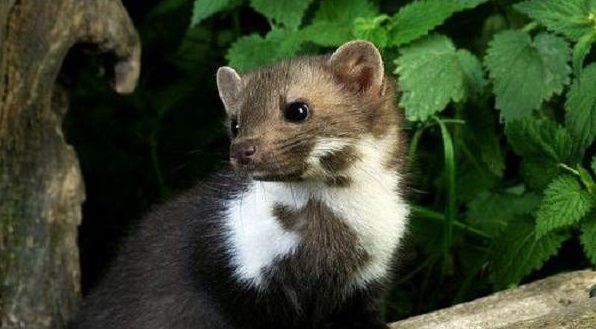 The largest one is the Caucasian marten, with a length of over 50 cm and a weight of 2 kg, but even such animals need a very, very large amount to sew the smallest fur coat.

he nature and lifestyle of the stone marten

Stone marten is a night animal that emerges from its shelter at dusk. They do not dig their own minks, preferring to settle in abandoned old “houses” of other animals, human buildings or natural shelters.

The martens take care of their “home” by covering it with feathers and grass, if people live nearby, then everything they can profit by, for example, pieces of cloth. Natural marten sites are:

If people live next to the territory that the marten considers their own, then these little animals, without hesitation, settle down:

Describing stone marten, it should be noted that the animal climbs trees perfectly, but does not like to do it, therefore it rarely uses hollows as housing only if there is nothing suitable near it. 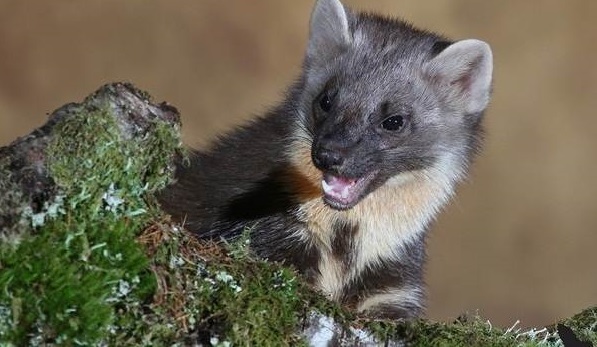 The character of the marten is not only curiosity, but also some cunning. The animal loves to tease dogs, in every possible way “hooligans” in human dwellings, for example, by spoiling food packaging or climbing curtains. Therefore, stone marten at home, if it is turned up like a pet, most of the time is spent either in a cage or in an aviary.

It is widely believed that the animal stone marten is a predator, which means it eats meat. This is only partly true. The marten is an omnivorous animal, which primarily feeds on what it hunts for the night hunt.

As a rule, rodents, frogs, birds, small rabbits become prey of the animal. In addition, marten loves berries, fruits, grass roots and eggs. Even a full-fledged marten will not pass by a bird’s nest with eggs, and if there is a tree with apricots nearby, the animal forgets that it does not like to climb them.

Earlier in the territory of Northern Germany and Norway, these animals were specially caught. Moreover, stone marten was fished not for the purpose of extracting fur, but with the aim of settling the animal in the barn. 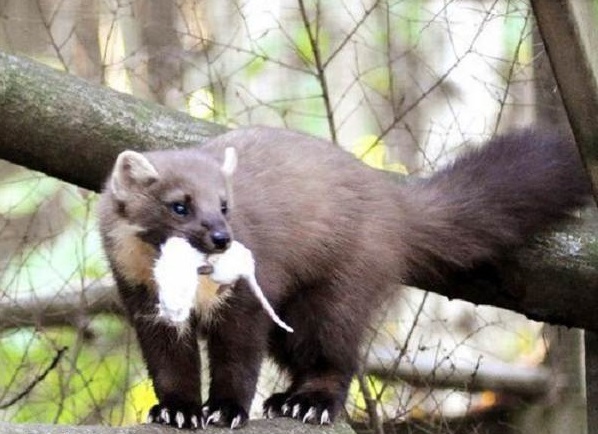 The marten instantly reacts to a stinging, chaotic movement and the like. This turns her into an ideal mousetrap, which. In addition, it will hunt until prey is “worn” around, regardless of whether it is needed for food or not. The same quality puts big poultry houses in danger. Throwing chickens and other birds instantly makes the animal start a hunt.

But the martens themselves eat very little, they need 300-400 grams of animal food. In the wild, the animal may well eat one gopher or a couple of forty, or a partridge and that’s it.

Those living in parks and in marten houses are “eating away”, but not much. In winter, stone marten loves to extract seeds from cones; there is no fundamental difference between spruce, pine or cedar cones. For the sake of cones, the little animals not only climb trees, but also crawl out of their shelters before dusk comes.

Stone marten is a loner, having its own territory, performing its “detour” and actively marking the borders. Representatives of their own species do not like animals, with the exception of «mating time».

This process is very curious at Kunih. The pair “get acquainted” at the end of spring, but, oddly enough, the male is not active. Directly mating female can only be achieved by the end of autumn. 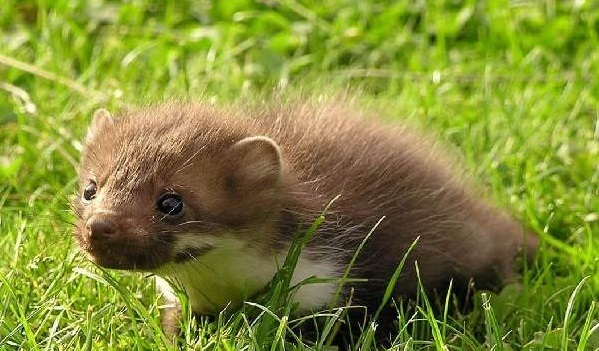 In the photo cubs stone marten

When this happens quite an amazing phenomenon — the «preservation» of sperm. That is, the female after mating can take place without a “delicate” position for up to eight months, despite the fact that the pregnancy itself at martens lasts only one month.

As a rule, 2-4 babies are born at a time, they are born naked and blind, opening their eyes only a month after birth. The period of feeding with milk lasts from 2 to 2.5 months. And babies become completely independent approximately 4-5 months after birth.

The biggest danger to the survival of small martens is the time when they first come to the study of the surroundings. Many become victims of the natural enemies of the weasels — foxes, arctic foxes and owls.

Martens live in nature for about 10 years, but in captivity this period is increased by several times. In zoos around the world, it is rarely possible to face the death of a representative of the weasel at the age of under 18 years of age. 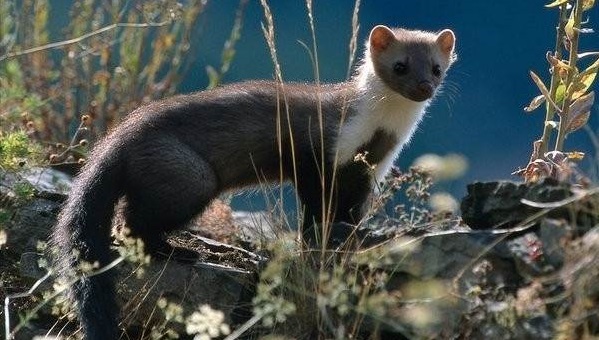 This allowed Kunim never to be on the verge of extinction. And the curiosity of animals and their features allow them to live remarkably in city parks, forest belts and other places that people have mastered.