Gannet (from the Latin Sula.) — a large sea bird , belongs to the order Pelecaniformes, family sulidae. At the moment there are six modern subspecies and several extinct specimens. The most numerous species are: northern gannets and gannets of Abbot . 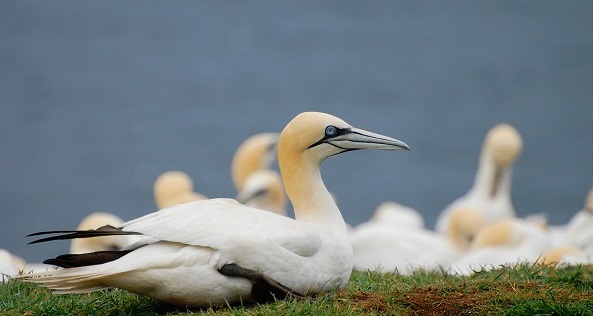 These beautiful sea birds are related to phaetons, cormorants and pelicans. Olushi feel great on the surface of the water, rather than on land. You can watch them calmly drift on the water surface.

Features and habitat of booby

Bird booby has a large size: body length ranges from 70 to 90 cm; weight — from 0.7 to 1.5 kg; wingspan reaches two meters. The body is elongated, streamlined, the neck is long, the wings are large with good plumage. The head is small in size, the beak is strong, elongated, bluish color.

The eyes are small, mobile, grayish tint. In the area of ​​the forehead, under the skin, there are airbags that allow the body to be absorbed while diving into the water. 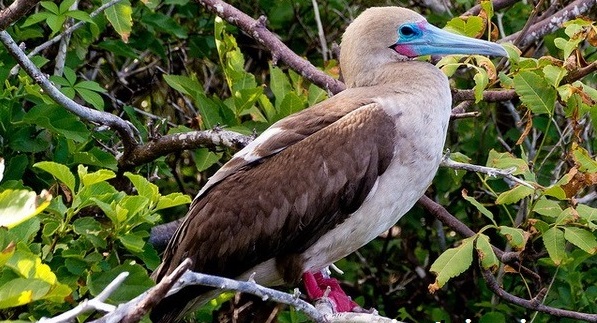 On photo is Sula nebouxii

he eye-eye of a gannet is distinguished by a special vigilance, it is binocular, which allows you to accurately determine the distance to the target and its mass. The bird breathes through the beak, as the nostrils are completely overgrown. The paws are placed slightly back, they are short, webbed. Plumage dense, tight to the body.

The main color of the gannet is black and white, but the shades of feathers can vary from fawn to brown. It all depends on the subspecies and the age of the bird . Depending on the species, the legs are painted in blue or red.

The main advantages of booby — they are wonderful flyers, divers and swimmers. Dive into the water from a height of 10-100 m, under water — to a depth of 25 m. In search of prey, they can reach speeds of up to 150 km / h. 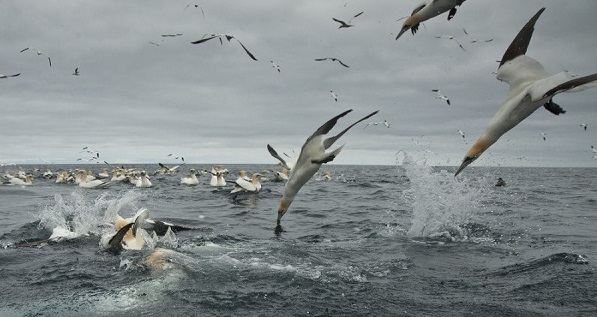 In the photo dive into the water Sula nebouxii

Colonies of seabirds willingly overrun the islands of the Pacific, Atlantic, Indian Oceans. There are many of them on the American coasts, in South Africa and on the Galapagos islands.

Character and lifestyle of booby

Olushi , a flock of seabirds , create groups of several tens of thousands of individuals. Some subspecies make distant flights. They have a calm character, are busy searching for food all day long, vigilantly looking for prey, hovering over the water surface. 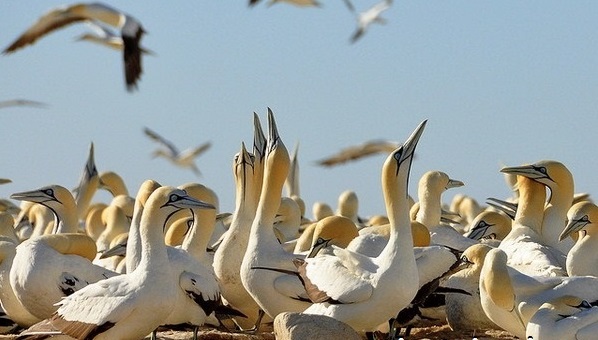 On the photo are Sula nebouxii

On land, they move awkwardly, resembling a duck walk. But in the sky they feel, as in their element, planning a flight, flapping their wings as needed, without spending energy once more.

They like to “hang” on the air currents, carefully looking into the depths of the ocean, then suddenly, like a stone, it falls into the water. Under water, they can not spend much time, because they are thrown on the surface of the water, like floats.

You can often observe such a sight as a gannet hovers above the surface without a single movement. She has a great sense of aerodynamics, she skillfully adapts to the air masses and, as it were, “sticks” to them. On the surface of the water sea bird is delayed for a short time, do not sail over long distances. 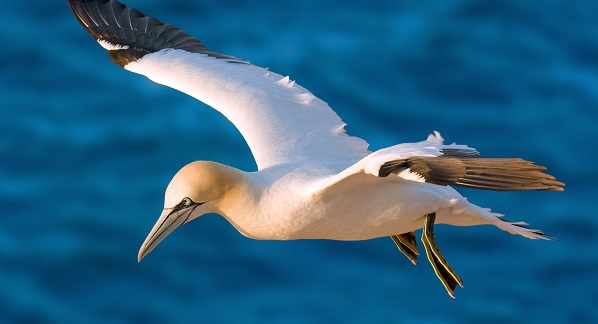 The main diet of the gannet is marine, this is fish and cephalopods. They love squid and herring (anchovies, sardines, herring, sprat, gerbil). Hunting for a bird is a simple matter, thanks to its sharp eyesight and strong beak. It is noteworthy that the bird captures the fish, not during diving, but when it dives out, seeing the silvery belly of the fish .

They are happy to catch flying fish above the sea surface, there are many original photos of booby on this topic . They hunt in the early morning or late evening. Sometimes they can diversify the diet with young algae, cast ashore, in order to replenish the reserves of vitamins and microelements.

Interestingly, booby often accompany dolphins and whales during the rut for shoals of fish . When flocks of fish are pressed against the surface of the water, they attack the agile marine birds . Thus, the school of fish is almost always destroyed. 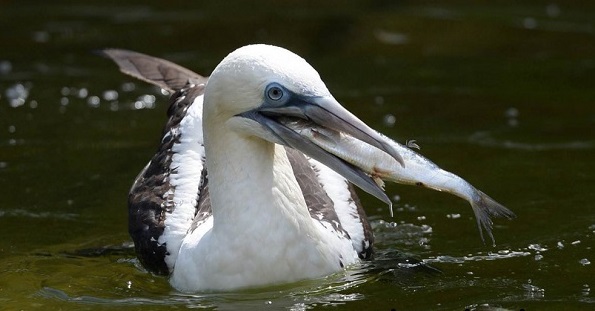 Bird nests on the coasts, sandy islands, areas with minor fossils and little rockiness. The period of courtship is a beautiful sight, the female sharply reacts to the color of the male paws and attentive attitude. Mating occurs about once a year.

Northern Gannets anxiously treat each other in the mating season. They find a secluded place, become the opposite, raise their beaks and cross them. The picture is admirable, a pair of motionless can stand for a long time.

Blue-footed boobies also raise their beaks, but alternate the process with alternate raising their paws. This is so that the female could see the bright blue tint of the membranes. It is on this basis that the female determines for herself a partner. For example, a male with pale gray paws is no longer interested in her. 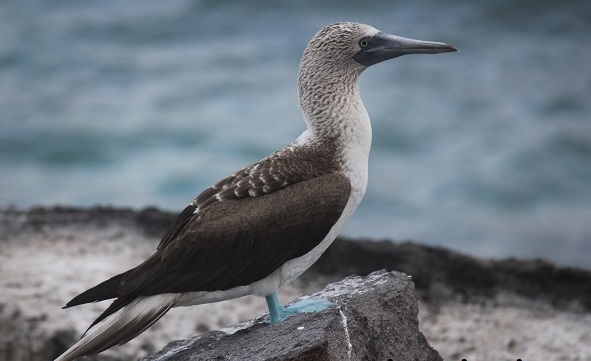 In the photo a blue-footed Sula nebouxii

The pair jointly arranges the nest, the material is dry twigs, dried plants or algae. The construction process is strictly distributed: the male is building material, the female puts it. It is not uncommon for neighbors to steal parts of a nest from each other.

A female gannet lays from 1 to 3 eggs, the incubation period ranges from 38 to 44 days. In the process involved both parents, roost hold very tightly, not allowing temperature changes. Eggs are heated by paws, not by plumage. Nestlings are born completely naked, only fluff appears on day 11.

Blue-footed boobies hatch only all chicks. For example, other subspecies feed only the strongest. Adults feed the chicks semi digested food, and later the whole fish. The color of young birds drilling color. They leave the nests from 3 months of age. 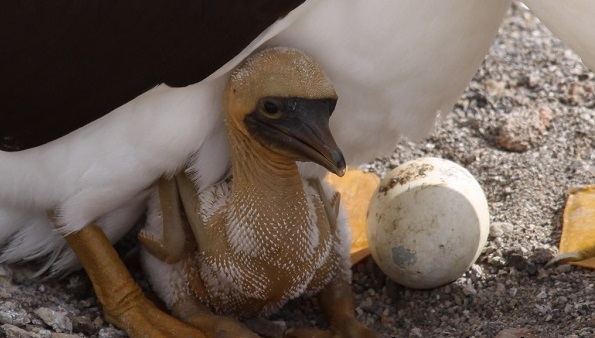 In the photo the bird Sula nebouxii

In nature, birds of prey are hunted by birds of prey , but this rarely happens because the nests are located in hard-to-reach places. Young animals who cannot fly are attacked by sharks .

A large number of litter (guano), which leaves booby, carries value for agriculture. Guano is rich in phosphorus, especially necessary for growing plants. In the natural environment , the life of a gannet is 20-25 years.