Suriname pipa is a toad that can be found in the waters of the Amazon River basin in South America. This species belongs to the pipov family, the class of amphibians. A unique frog is capable of bearing offspring for almost three months right on its back. 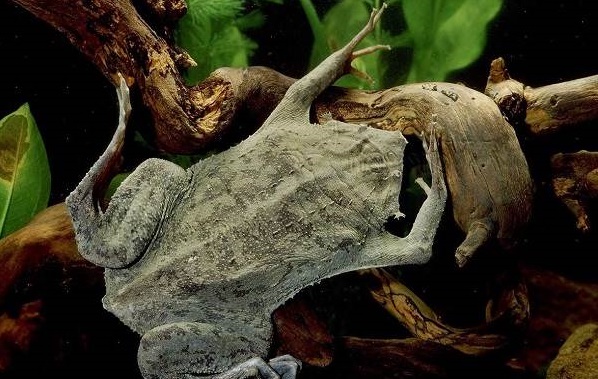 Description and features of the structure of Surinamese pipa

A distinctive feature of an amphibian is the structure of its body. If you look at the photo of Pipa Surinam, you might think that the frog accidentally landed under the rink. The thin, flattened body looks more like a dead tree leaf than a living inhabitant of the warm waters of a tropical river.

The head is triangular in shape and as flat as the body. Tiny eyes, devoid of eyelids, located at the top of the muzzle. It is noteworthy that the pip frog is missing its tongue and teeth. Instead, at the corners of the mouth, the toad has skin patches resembling tentacles.

The front legs end with four long, claw-free fingers that do not have membranes, as is the case with ordinary frogs. But the hind limbs are equipped with powerful skin folds between the fingers. This allows the unusual animal to feel confident under water. 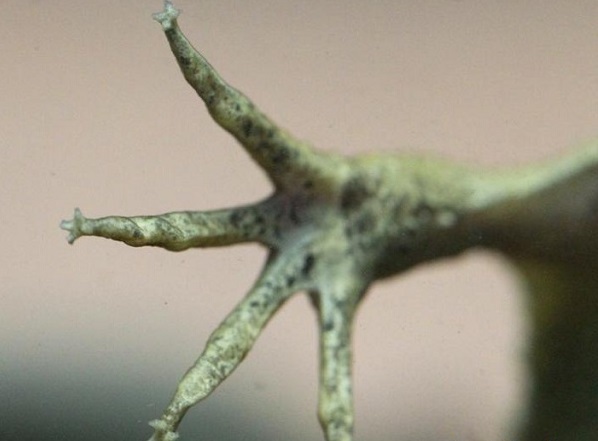 The body of an average individual does not exceed 12 cm, but there are also giants, whose length can reach 20 cm. The skin of the Suriname pipa is rough, wrinkled, sometimes with black spots on the back.

The color does not differ in bright colors, usually it is a gray-brown skin with a lighter belly, often with a longitudinal dark stripe suitable for the throat and encircling the frog’s neck . In addition to the very lacking external data, the pipa is “rewarded” by nature with a strong odor resembling the odor of hydrogen sulfide.

Suriname pipa dwells in warm muddy reservoirs, without a strong current. There is an American pipa and in the neighborhood with people — in irrigation canals of plantations. The favorite muddy bottom serves as a feeding medium for the toad. 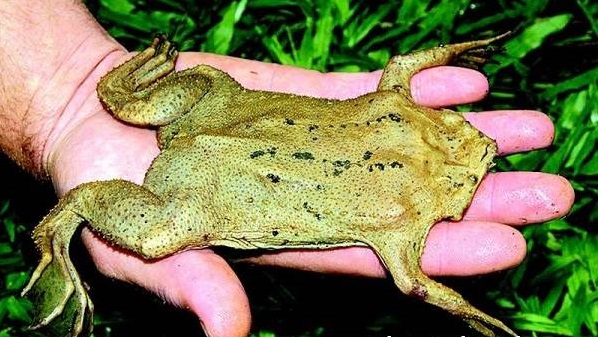 With long fingers, a frog loosens its viscous soil, pulling food into its mouth. Special skin growths on the front paws in the form of asterisks help her in this, which is why pipa is often called «starfinger».

The Suriname pipa feeds on organic residues that it digs in the ground. These can be pieces of fish, worms and other insects rich in protein.

Despite the fact that the frog is quite developed characteristic features of terrestrial animals (rough skin and strong lungs), pips practically do not appear on the surface.

Exceptions are periods of heavy rainfall in areas of Peru, Ecuador, Bolivia and other territories of South America. Then flat toads clumsily crawl out of the water and embark on a journey hundreds of meters from the house, basking in the warm muddy pools of tropical forests . 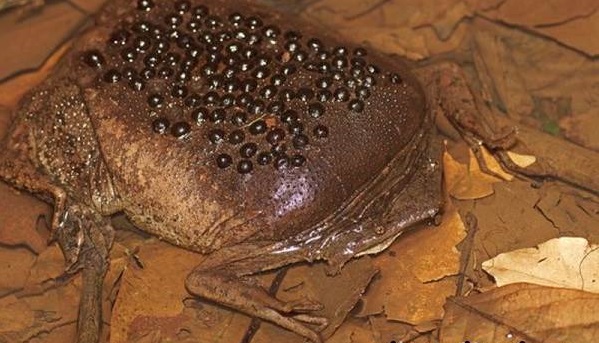 Thanks to the maternal skin, all pipa offspring always survive

The onset of seasonal rain serves as a signal for the onset of the breeding season. Suriname pipa are heterosexual, although outwardly it is quite difficult to distinguish the male from the female. The mating dance begins with a male «song.»

Emitting a metallic click, the bearer makes it clear to the female that he is ready for mating. Having approached the chosen one, the female starts to throw unfertilized eggs directly into the water. The male immediately releases the sperm, giving rise to a new life.

After that, the expectant mother sinks to the bottom and catches ready-to-develop eggs right on her back. The male in this action plays an important role, evenly distributing the eggs on the back of the female.

With the abdomen and hind legs, he pushes each egg into the skin, thus forming a semblance of a cell. After a few hours, the entire back of the frog becomes like a honeycomb. Having finished his work, a careless dad leaves the female with his future offspring. This is where his role as head of the family ends. 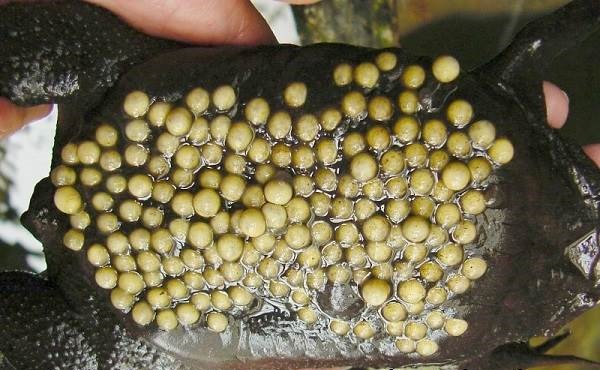 In the photo are pip eggs attached to her back.

For the next 80 days, the pipa will bear eggs on its back, resembling a kind of mobile kindergarten. In one litter, the Suriname toad produces up to 100 small frogs. All offspring, located on the back of the expectant mother, weighs about 385 grams. Agree, not an easy burden for such a puny amphibian.

When each egg has settled down in its place, its external part is covered with a strong membrane that performs a protective function. The depth of the cell reaches 2 mm.

Being in the mother’s body, the embryos receive all the nutrients necessary for development from the body. Partitions «honeycomb» abundantly supplied with blood vessels that deliver food and oxygen.

After 11-12 weeks of maternal care, young pips break through the film of their personal cell and break out into a huge water world. They are completely independent in order to lead a way of life as close as possible to the way of life of an adult individual. 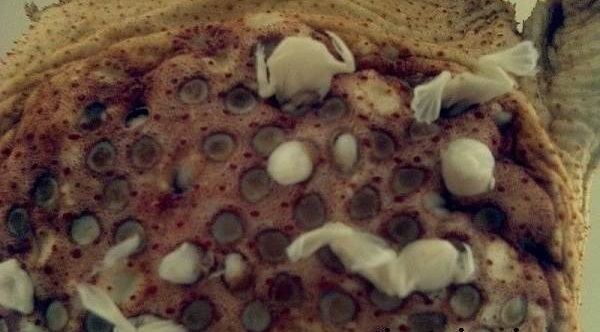 Although babies are born out of the mother’s body that has been formed, this phenomenon is not considered a “live birth” in its true meaning. Eggs develop in the same way as other amphibians, the only difference being the place for the development of a new generation.

Freed from the young frogs, the back of the Suriname pipa requires renewal. For this, the toad rubs its skin on stones and algae, thereby throwing off its “childish place”.

Until the next rainy season, the peep frog can live for its own pleasure. Juveniles will be able to reproduce on their own only upon reaching 6 years of age. 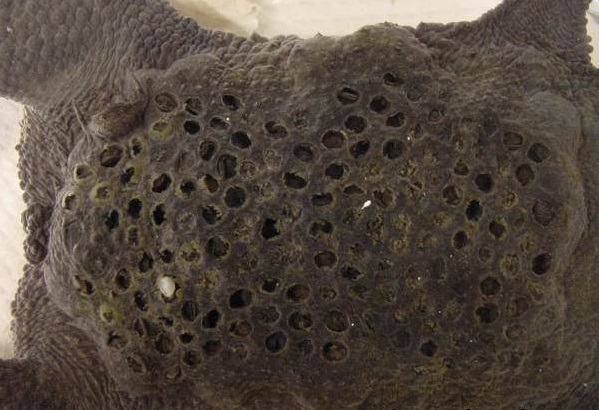 Pipa’s back after small toads are born

Neither the appearance nor the sharp smell does not stop the lovers of the exotic to breed this amazing animal at home. Watching the process of grubbing the larvae and the birth of small frogs is exciting not only for children but also for adults.

In order for pipa to feel comfortable, you need a large aquarium. One frog needs at least 100 liters of water. If you are planning to purchase two or three individuals, add each for the same amount.

Water should be well aerated, so take care in advance of a similar system of oxygen saturation of the aquarium. Temperature conditions need to be carefully monitored. The mark should not be higher than 28 С and lower than 24 С heat. 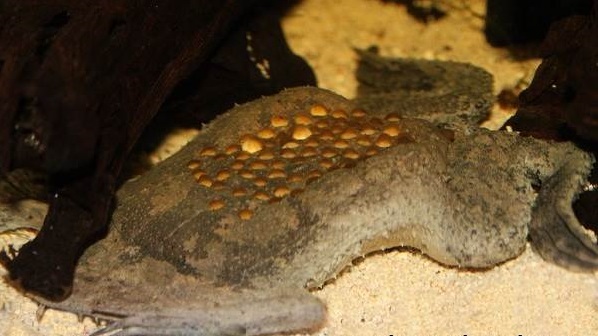 At the bottom is usually poured fine gravel with sand. Artificial or live seaweed will help the Suriname toad feel at home. In food pips are not whimsical. For them, suitable dry feed for amphibians, as well as larvae, earthworms and small pieces of live fish.

Admiring the maternal instinct for the amphibians that is surprisingly strong, the children’s writer (and part-time biologist) Boris Zakhoder devoted one of his poems to Suriname pipa. So far and little-known frog has become famous not only in South America , but also in Russia.