As far as unexplored wild nature and its inhabitants. Animals living in the forest, the mountains, on cliffs, in burrows. After all, we know practically nothing. And they have hundreds of years live, breed.

Building families, slipping into the herd. And fight for survival. Global catastrophe – a ruthless deforestation going on all over the globe. Disrupting the habitual dwelling of the defenseless, and that is insulting, useless animals. And they farther and farther you have to move away from the man. And some even on the verge of extinction. 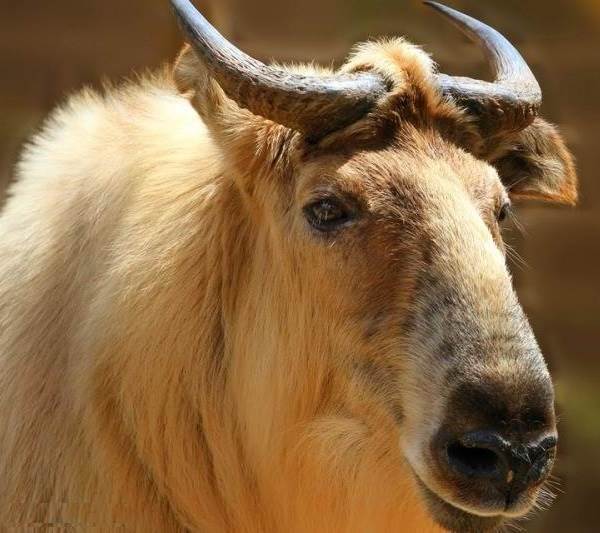 One such animal – the takin. Zoologists have discovered this kind of one hundred and fifty years ago, in the second half of eight years. Remains was found in of skins and skulls of animals not known to anyone.

Residents of the local tribes they were called just – kin. And only nine hundred and ninth year, the society of English naturalists – zoologists saw it live. Miraculously the animal was in London zoo, shocking everyone with his appearance.

And in the eighty and fifth of the last century, the famous zoologist George Schaller and his team, found out some facts about their habitat. As for the food, takin big fans of green twigs and leaves, not torn, and almost stripped the trees and bushes.

As the naked branches. And what was the surprise of the researchers from the seen, when the three hundred pound calf, getting on his hind legs and karapetsas almost three meter height, out of reach for leaf. And gets him. 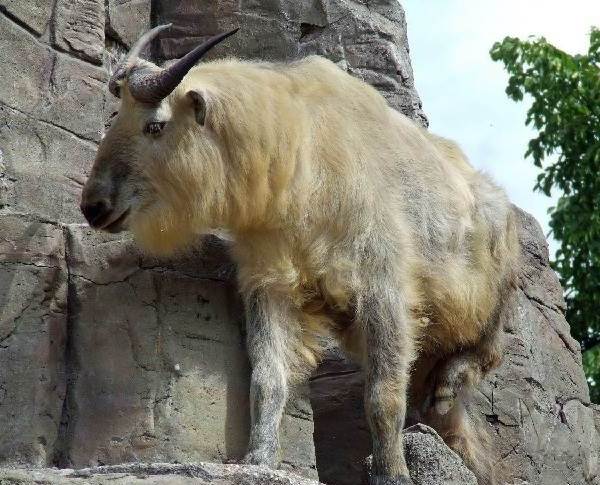 Yet it turned out that living in flocks of from thirty to one hundred thirty individuals, and having them in more than a dozen cubs. Takin choose a female babysitter who looks after the calves during the whole time, until they grow up and stronger.

In addition to the destruction of the territory where they live, these animals were actively hunting. The poachers were caught takin for private zoos. The number decreased dramatically.

In this regard, the Chinese have taken a categorical decision to make the animals takin a national treasure and banned all hunting at them. I opened a couple of the largest nature reserves in their breeding.

Description and features of takin

Takin is an animal not yet fully studied by zoologists. After all, except as in the wild it is not found. It is not in circuses or in zoos. And in nature, in its discretion, it rarely comes across the eye. Going high into the mountains for thousands of kilometers. 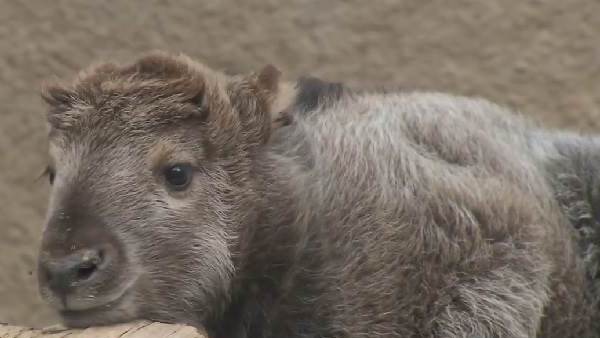 He cloven-hoofed, mammal, polygamous. It kind of belongs to the family of bovids. They are divided into several subspecies, differing brightness and peculiarity of coat color.

One of them is wheat color, the Tibetan or Sichuan takin. The other brown, almost black – takin Mishima. They are the inhabitants of southern China. But there is still a very rare Golden takin.

The animals at the withers, reach a meter in height. All its body, from nose to tail in length from one and a half to two meters. And weight gain three hundred or more pounds. Females slightly smaller. Consider carefully this little-known us of a calf, included in the Red book. 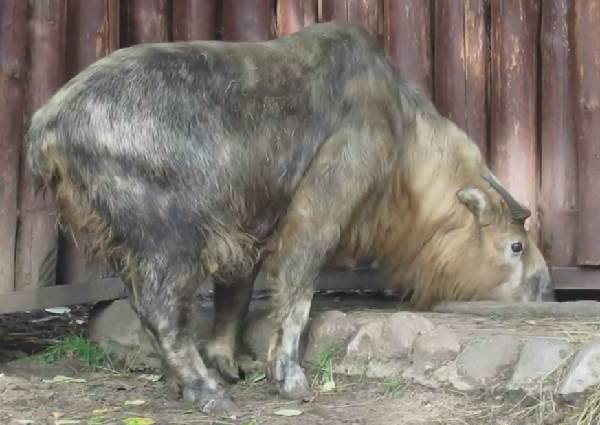 His huge nose completely bald, something like a moose nose. Mouth with eyes too large sizes. The ears wonder rolled into tubes, the tips slightly even lowered to the bottom, not large.

The horns are very large, at the base of the forehead thickened and broad in his forehead. Branched to the side, then up and slightly back to back. The tips of the horns are sharp and smooth, and their base like an accordion, transverse waves. This form is the peculiarity of their appearance. In female animals, the horns are smaller than males.

Wool is densely planted, and rude, towards the bottom of the torso and legs longer than the upper part of the body of the animal. Its length is thirty inches. And not surprising, because wherever they live, can be very snowy and cold. 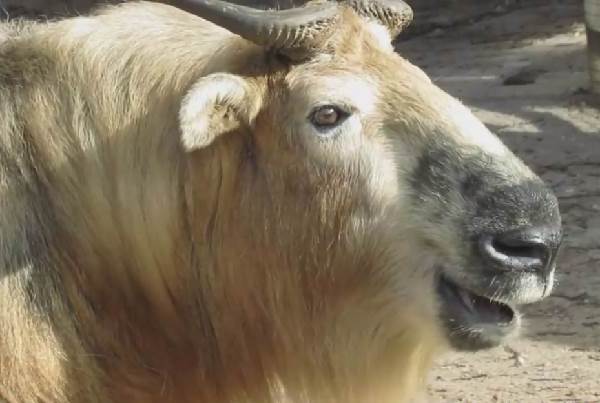 The paws of these animals, in comparison with a powerful torso look small and short. But, in spite of clumsiness, the takin well on impassable mountain trails and cliffs. Where not that person, not every predator is going to get there. And their enemies, in the face of tigers, bears – is not even sickly animals.

Looking at the photo of the takin, summing up his appearance with confidence and say what he looks like. Face like a moose, short legs, like a goat. Size, similar to a bull. Here is a special animal in nature.

The lifestyle and habitat of the takin

Takin came to us from the distant Himalayan mountains and the Asian continent. Natives of of India and Tibet. They live in forests of bamboo and rhododendron and high in the snowy mountains. 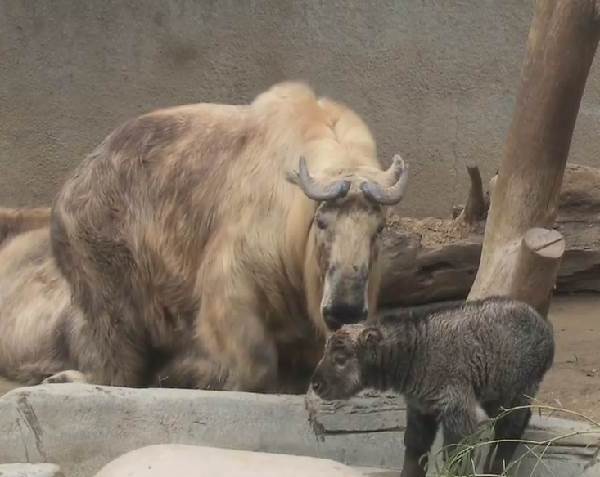 Takin climb thousands of miles above sea level, away from everyone. And only with the arrival of cold weather descend to the plains in search of food. Working in smaller groups of up to twenty heads.

Consisting of young males, females and small children. Adults and even the old males live their separate lives, before the onset of the breeding season. But with the arrival of spring, the animals, gathered the herd again, move high into the mountains.

Actually they are very well adapted to living in cold climates. On their body gustosi, warming undercoat. Wool Rosalina to not get wet and not freeze. 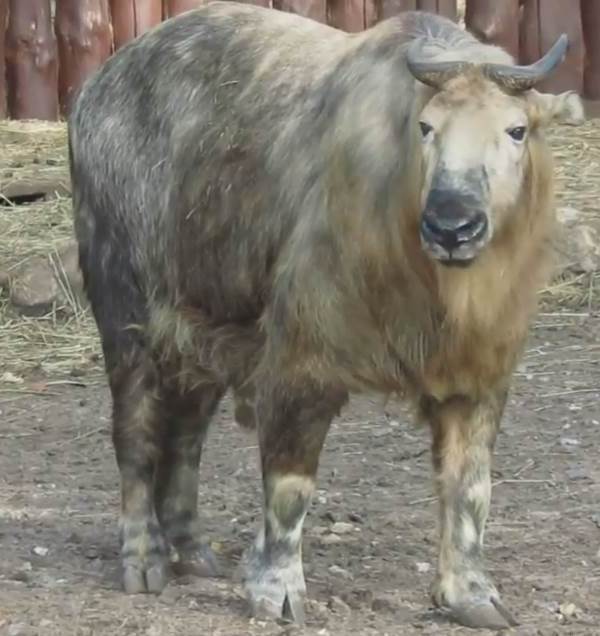 The structure of the nose such that the cold air that they inhale, reaching the lungs is warmed well. Their skin produces so much fat that no Blizzard they are not afraid. These animals are very attached to one habitat, and reluctant to leave it, unless forced to do so.

The character of takin

Takin brave and courageous animal, and in skirmishes with the enemy, throwing the attackers horns in different directions to tens of meters. But sometimes, for unexplained reasons, he fearfully hides.

Hiding in thick bushes to lie on the ground, arm outstretched along the neck. And moreover, the witnesses of this spectacle saying that he was so well camouflaged that you can even step on it. 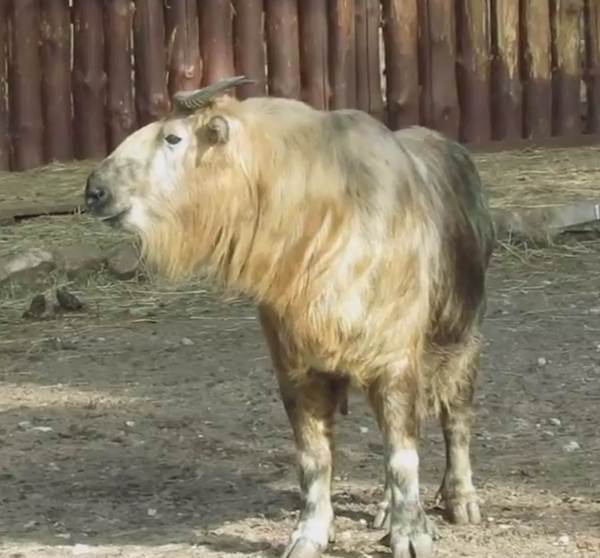 If he has to run, you will accelerate at great speed, despite his size. And can easily move around the rocks, jumping from one to another. If the animal senses danger, he warns his flock. Making coughing sounds or loud grunts.

About the love of leaves we have already spoken. In addition to these animals, however, with less hunting, eating grass. Naturalists have counted more than five ten varieties of grasses suitable for consumption.

Do not disdain the bark from trees, moss is also a good treat. In winter, pull out from under the snow the bamboo shoots. And most importantly, they are vital salts and minerals. 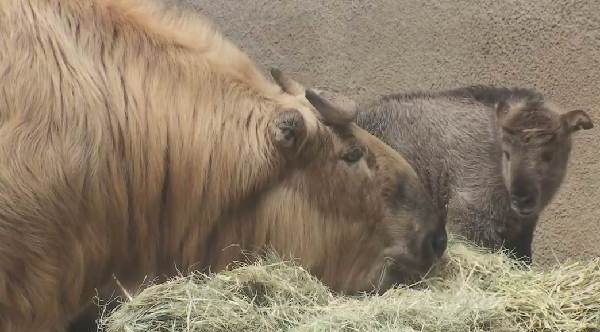 Therefore, they live near salt rivers. But in protected areas, volunteers, laid out according to the area of salt rocks. They are called Lizunov. Takin can spend hours to lick. Morning and evening often have feeding.

In the wild, you can easily determine where this feeds the calf. Your favorite treats takin tread the whole trail. Some to water, some to the greens. After a couple of times that flock back and forth, there vtaptyvaetsya straight asphalt roads.

The reproduction and lifespan of the takin

In the herd, are of the male and female are kept in separate groups. And in the middle of summer, they is the mating season. At the age of three takin reaches the maturity period.

Then the males collected in separate piles, begin to actively look for a group of females. A large flock. After fertilization, the female carrying the baby for seven months. 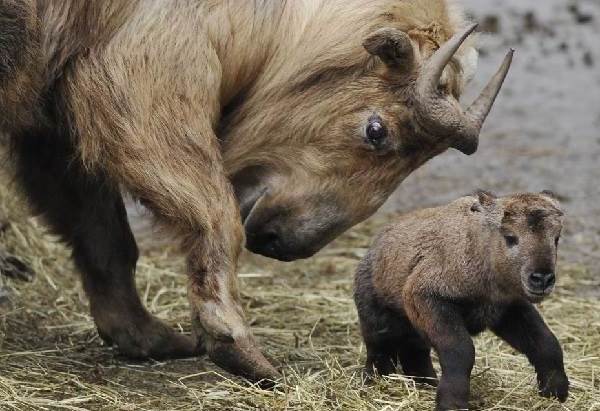 The light they have only one kid. The cub weighs just over five pounds. It is very important that it is already three days stood on his feet. Otherwise, an easy prey for other predators. For an adult they are not very attacking. But the little calf is always at risk. And in search of food have to pass more than one kilometer.

At two weeks of age, babies already taste the greenery. To two months their herbal diet is greatly increased. But my Mama takin are still feeding their child breast milk. The lifetime of takin in an average of fifteen years.

But do not forget that despite the strict ban, poachers still operate in the forests, killing for meat and skins. And in Pets, collections, people with unlimited financial resources, order and buy these oxen. Sichuan takin, on the verge of extinction. And Golden, so all in critical condition. Once again I want to encourage people to be humane toward the outside.

Aspid snake. The lifestyle and habitat of the snake Aspid