Peculiarities and habitat of tamarin

Tamarin — inhabitant of tropical forests from the order of primates. Everyone knows that four-legged mammals, called monkeys , belong to the highest primates. 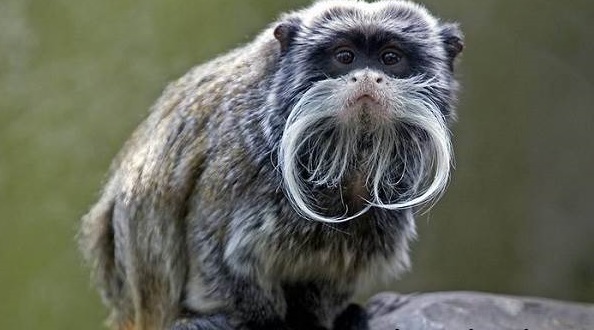 And in their structure and physiology are considered scientists the closest beings to man. There are many types of these animals in nature.

One of them are wide-nosed monkeys belonging to the family of marmosets , called: tamarins. The body length of these small animals is only 18-31 cm.

But despite their so small size, they have an impressive, but thin, tail, reaching values ​​from 21 to 44 cm, which is comparable with the length of their body. 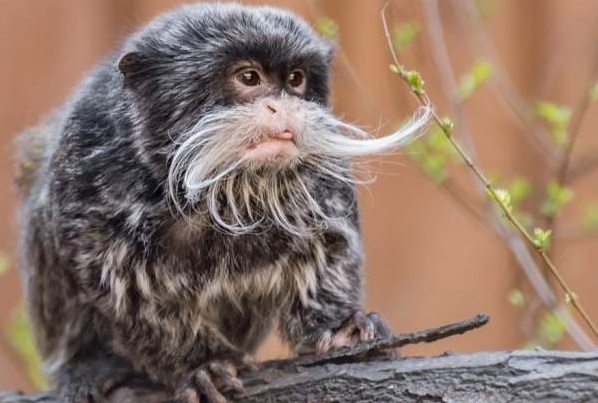 Biologists know more than ten species of tamarins, and each of them is distinguished by individual external features. First of all, this refers to the coloration of thick and soft fur, which may turn out to be yellowish-brown, black or white.

And monotonous animals are rare, painted in front and behind in a variety of colors. In addition, there are other features of tamarins , by which one type of such monkeys can be distinguished from another.

For example, the faces of these animals can be completely hairless and thickly overgrown hair covering crown, temples, cheeks and the whole face. There are varieties with a beard and mustache, with a colorful growth in the mouth area. 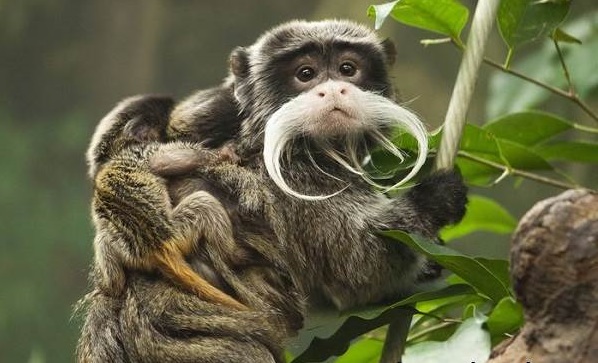 In the photo the imperial tamarin and his cub

The main advantage and distinctive feature (as can be seen in the photo ) of the imperial tamarins are their white long, rare beauty, mustache. These are miniature animals weighing only 300 g. Imperial tamarins live in Bolivia, Peru and Brazil.

Ordinary tamarins stand out in black color, and this color is not only fur, but also their face. They live in South and Central America, spreading in the rainforest from Panama to Brazil.

The crested variety of such monkeys was called because of the presence of a light long tuft on the head. Such animals are found in Colombia and on the coast of the Caribbean Sea. 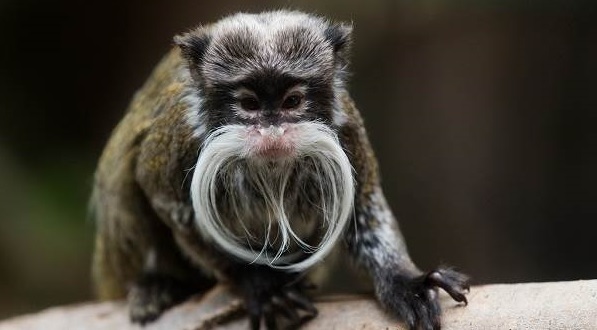 Some of these representatives of the monkey genus are considered rare and are protected by the law on the protection of nature in many states. One of the endangered species is the oedipal tamarin .

Its scientific name: «oedipus» (Tolstonog), these animals that live in South America in its northwestern regions, and also partly in Colombia, received for the furry, whitish or yellowish shade, the coat covering their limbs.

What makes their legs visually thick. As you can see on the photo of oedipal tamarins , such monkeys look pretty elegant, and their external image is very original. 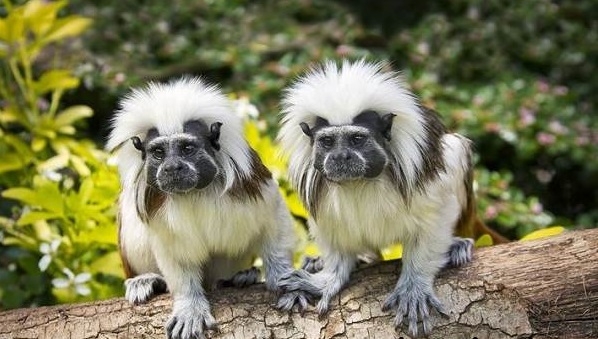 On the photo of the oedipus Tamarin

On their head has a kind of comb in the form of white long hair, growing from the back of the neck and reaching almost to the shoulders. The back of the animals is brown; and the tail is orange, closer to the end is black.

Oedipal tamarins for many centuries been the object of active hunting. Indians killed them for tasty meat. Currently, the number of species is reduced due to the barbaric destruction of the forests in which they live. In addition, such monkeys are caught in large numbers and sold by animal traders.

The nature and lifestyle of tamarin

Tamarins prefer to settle in dense forests, rich in tropical plants and vines, in which they like to climb and frolic. Sunrise animals wake up, usually active during daytime. 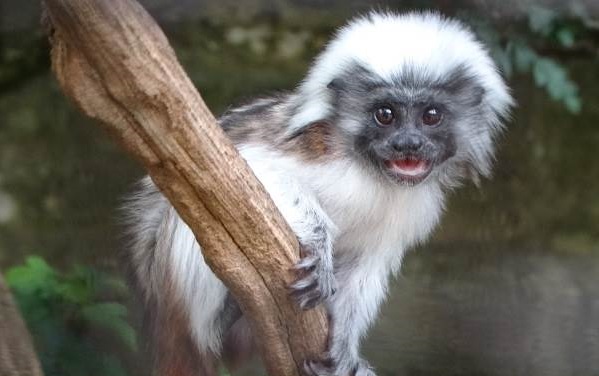 But they go to bed too early, settling down for the night among the branches and vines. A long tail is a rather important detail for tamarins, as it helps the animal to hold on to the branches, thus moving from one to the other.

Usually monkeys prefer to keep small family clans, the number of members of which is from 4 to 20 individuals. The ways of their communication are: mimicry, posture, raising the coat and the characteristic loud sounds.

And in this way, expressing their feelings, thoughts and emotions, the animals make social contact. The sounds that these monkeys make are in some cases like the chirping of birds. 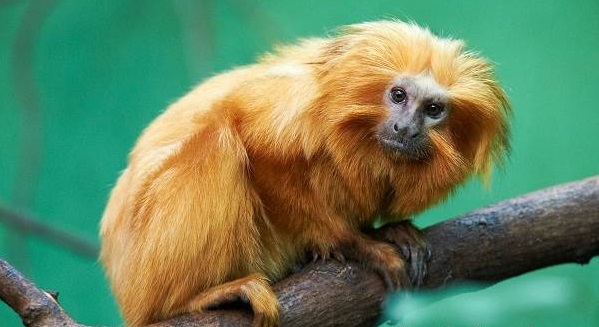 In the photo is a golden lion tamarin

They are also able to reproduce lingering cries and whistles. When a danger arises, in the wilderness you can hear the piercing cry of these animals.

There is a hierarchy within the tamarin family. The main one in such a group is usually the oldest female. And the share of males remains the extraction of food.

Habitat animals mark, gnawing the bark of trees, and protect the occupied area from the invasion of strangers and unwanted visitors. The members of the tamarin group take care of each other, spending enough time in a pleasant procedure of brushing the fur of the congeners. And they, in turn, do the same in relation to their relatives. 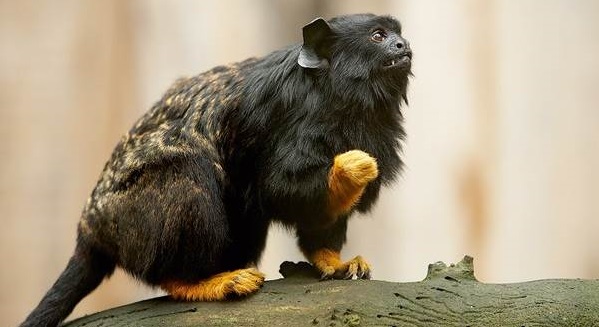 In the photo is a red-handed Tamarin

In the pavilions of zoos, which often contain many species of tamarins , they usually build special enclosures where there are always live and artificial tropical plantings, as well as creepers and reservoirs, as these animals are children of tropical rain forests.

The tamarin monkey feeds on plant food: fruits, even flowers and their nectar. But do not hesitate and delicacies of animal origin. These miniature creatures actively eat chicks and bird eggs, as well as various insects and small amphibians: spiders , lizards , snakes and frogs .

Such monkeys are omnivores and unpretentious. But being in captivity, they are fully capable of losing their appetite due to their suspicious attitude toward unfamiliar food.

In zoos and nurseries tamarins are usually fed a wide variety of fruits that they simply adore, as well as small insects, for example, grasshoppers , locusts , cockroaches , crickets , which are specially launched into the aviary so that they can be caught and eaten by monkeys. 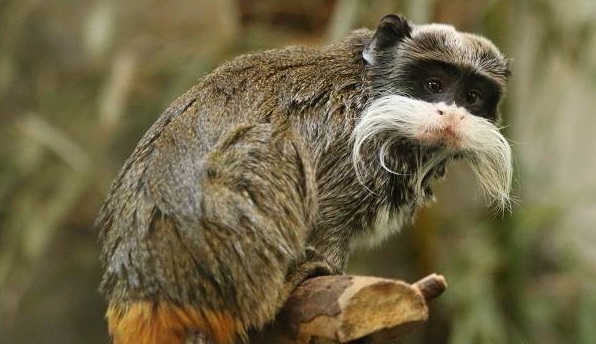 In addition, in the diet of tamarins include lean boiled meat, chicken, ant and ordinary eggs, as well as cottage cheese and gum of tropical fruit trees.

Reproduction and life span of tamarin

Like almost all mammals, tamarins before mating observe a certain ritual, which is expressed in a certain kind of courtship «gentlemen» for their «ladies».

Marriage games for these monkeys begin in January-February. Pregnancy tamarina-mom lasts about 140 days. And by April — June cubs appear in animals.

Interestingly, fertile mom-tamarins, as a rule, are born twins, and after six months they are able to produce two more. The children grow rapidly and by the age of two months they move independently and try to feed themselves. 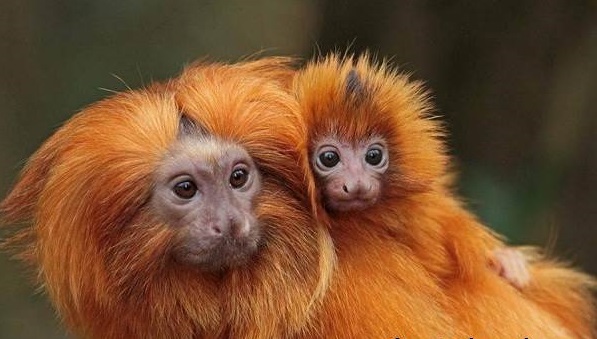 On photo golden tamarin with cub

They reach maturity by about two years. Having risen to adults, children usually do not leave the family and continue to live with relatives. All members of the group take care of the growing offspring, looking after and protecting the little ones and bringing them the tidbits for lunch.

In zoos tamarins live well in pairs, breed in captivity without any problems, are gentle and caring parents. Growing up children physically become ready to have their own offspring at the age of 15 months.

In zoos, these creatures live long enough, usually about 15 years, but in natural conditions often die much earlier. On average, live tamarins for about 12 years.

Krill crustacean. Way of life and habitat of a crustacean of the krill