In our huge country lives a great many large and small animals. Rodents play an important role in the ecosystem, and one of them is the Mongolian marmots — the Tarbagans. 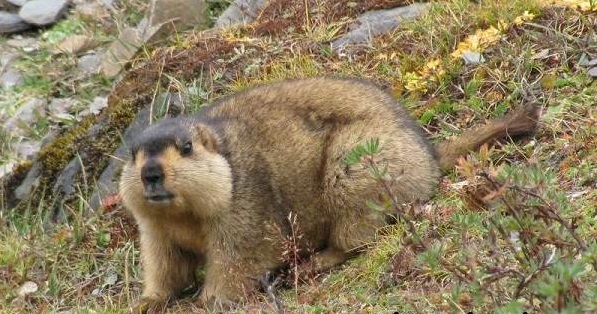 This animal belongs to the genus of marmots. The build is heavy, large. The size of males is about 60-63 cm, females are a bit smaller — 55-58 cm. Approximate weight is about 5-7 kg. The head is average, shaped like a rabbit. The eyes are large, dark, and rather large black nose. The neck is short. Sight, smell and hearing are well developed.

The legs are short, the tail is long, about a third of the length of the whole body in some species. Claws sharp and strong. Like all rodents, the front teeth are long. Tarbagan coat is pretty beautiful, sandy or brown in color, spring is lighter than in autumn. The coat is thin, but dense, of medium length, the soft undercoat is darker than the main color. 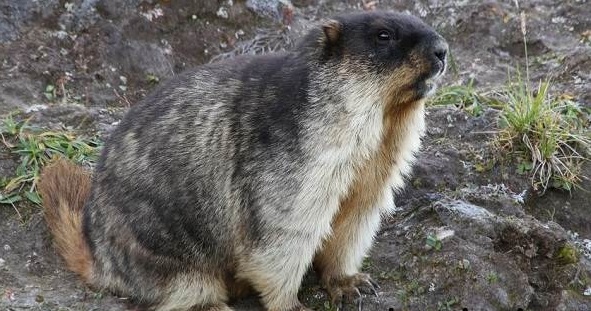 There is red hair on the feet, black on the head and the tip of the tail. Round ears, like paws, with a red tint. In Talas Tarbagan there is red fur with light spots on the sides. This is the smallest species.

Differently colored individuals live in different regions. Among them are ash-gray, sandy-yellow or black-red. The animals should look appropriate to the natural landscape in order to hide their location from numerous enemies.

Tarbagan lives in the steppe regions of Russia, in Transbaikalia and Tuva. In Kazakhstan and Trans-Urals there lives a baikak marmot The eastern and central parts of Kyrgyzstan, as well as the foothills of the Altai, have chosen the Altai view.

The Yakut species lives in the south and east of Yakutia, in the west of Transbaikalia, and in the northern part of the Far East. Another view — the Fergana tarbagan, common in Central Asia. 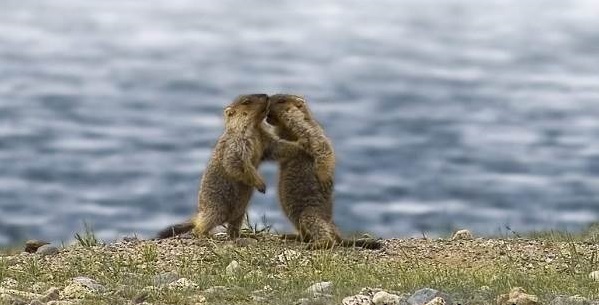 The mountains of Tien Shan became home to the Talas Tarbagan. A black-capped marmot lives in Kamchatka, which is also called tarbagan. Alpine meadows, steppe plains, forest-steppe, foothills and river basins are comfortable for them. They live in 0.6-3 thousand meters above sea level.

Tarbagans live in colonies. But, each individual family has its own network of minks, which include a breeding hole, winter and summer “residences”, latrines and multimeter corridors ending in several exits.

Therefore, a not too fast animal can consider itself to be relatively safe — in case of a threat, it can always hide. In depth the hole reaches usually 3-4 meters, and the length of the moves is about 30 meters.

The depth of the burrow of the Tarbagan is 3-4 meters, and the length is about 30 m.

Family, this is a small group inside the colony, which consists of parents and young not older than 2 years. The atmosphere inside the settlement is friendly, but if aliens enter the territory, they are chased away. When food is sufficient, the colony is about 16-18 individuals, but if the survival conditions are more difficult, then the livestock can be reduced to 2-3 copies.

The animals live in the diurnal way of life, leave the minks around nine in the morning, and around six in the evening. While the family is busy digging a hole or feeding, someone stands on a high ground and in case of danger will warn the whole neighborhood with a shrill whistle. 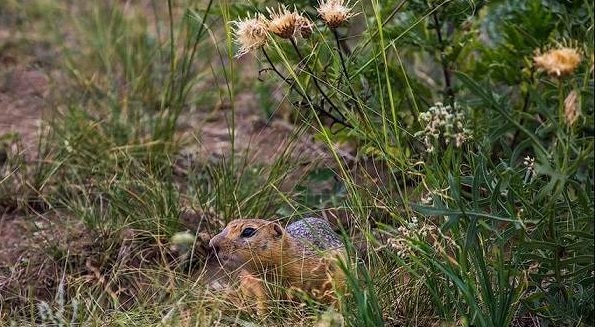 In general, these animals are very fearful and cautious, before leaving the hole, they will look around and sniff for a long time until they are convinced of the safety of their plans.

Listen to the voice of marmot tarbagan

With the arrival of autumn, in September, the animals hibernate, hiding deep in their burrows for seven long months (in warm areas stay in hibernation less, in cold longer).

They close the entrance to the hole with feces, earth, grass. Due to the layer of earth and snow above them, as well as their own heat, the tightly pressed Tarbagans to each other maintain a positive temperature.

In the spring, when the animals get out of the holes, it will be time for summer molting and the next breeding and feeding stage. After all, Tarbagans need to have time to accumulate fat before the next cold weather. 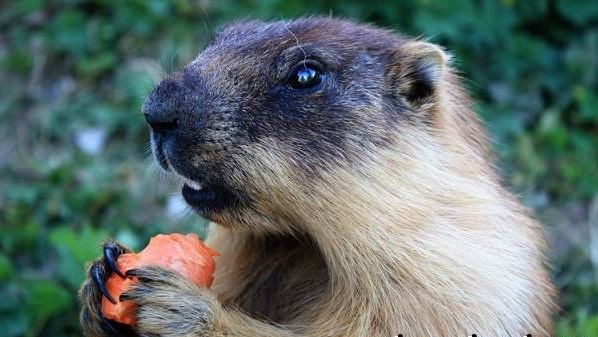 These animals feed on a large number of grass species, shrubs, and woody plants. Usually they do not feed on agricultural crops, since they do not settle in the fields. They feed various steppe grasses, roots, berries. Usually eats sitting, holding the front legs.

In spring, when there is still little grass, the tarbagans eat mostly the bulbs of plants and their rhizomes. During the period of active summer growth of flowers and grass, the animals choose young shoots, as well as buds, which contain the necessary proteins.

Berries and fruits of plants are not fully digested in the body of these animals, but go outside, thus spreading through the fields. Tarbagan can swallow up to 1.5 kg per day. plants. 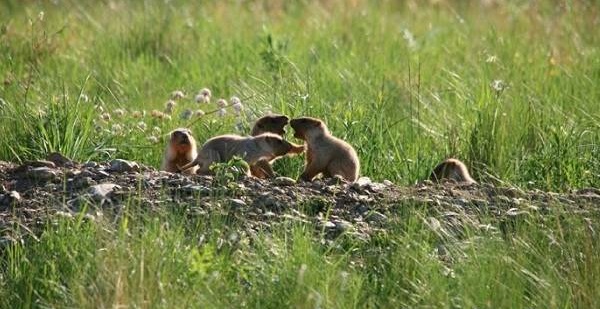 In addition to plants, some insects get into the mouth — crickets, grasshoppers, caterpillars, snails, pupae. Specially animals do not choose such food, but it makes up to a third of the entire diet on some days.

With the content of tarbagans in captivity, they are fed with meat, which they willingly devour. With such an active diet, the animals gain about a kilogram of fat per season. They almost do not need water, they drink very little.

About a month after hibernation, the Tarbagans mate. Pregnancy gested 40-42 days. Usually the number of babies is 4-6, it happens 8. Newborns are naked, blind and helpless.

Only after 21 days they will open their eyes. For the first month and a half, babies feed on mother’s milk and gain a decent size and weight on it — up to 35 cm and 2.5 kg. 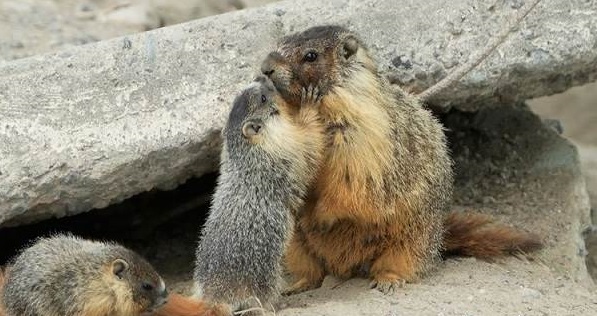 On a photo the groundhog tarbagan with cubs

At the age of one month, young cubs slowly get out of the hole and examine the white light. Like any children, they are playful, curious and mischievous. Teenagers experience their first hibernation in the parental hole, and only the next, or even a year later, will acquire their own family.

In nature, the Tarbagans live for about 10 years, while in captivity they can live up to 20 years. Tarbagan fat with beneficial properties is appreciated by people. They can be treated for tuberculosis, burns and frostbite, anemia. Due to the large demand for fat, fur and meat of these animals, tarbagan is now listed in the Red Book of Russia and is in the book under status 1 (threat of extinction).