Features and habitat of a jaguar

Jaguar is a beautiful and graceful animal, a representative of the cat family. It is considered the largest predator of the inhabitants of the American continent, taking third place around the world.

The length of his body is often more than one and a half meters. A particularly large males reach a weight of 158 kg. Female is much smaller, and the average weight of individuals is from 70 to 110 kg. 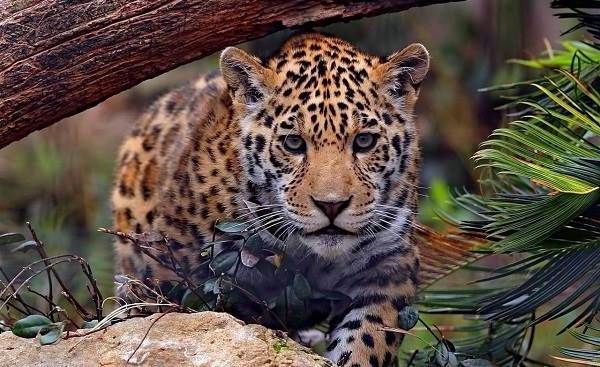 Jaguar has a long tail: from half a meter and more. The height of the animal at the withers reaches 80 cm. The animal belongs to the genus Panther. As you can see in the photo of the animal, the jaguar looks like a leopard, but much larger.

And the color also looks like his predatory relative, but the structure of the skull resembles a tiger. Has a thick and short fur and rounded ears. Color is diverse: from bright red to sandy colors, the bottom and soles are white, and dark spots are scattered throughout the body. 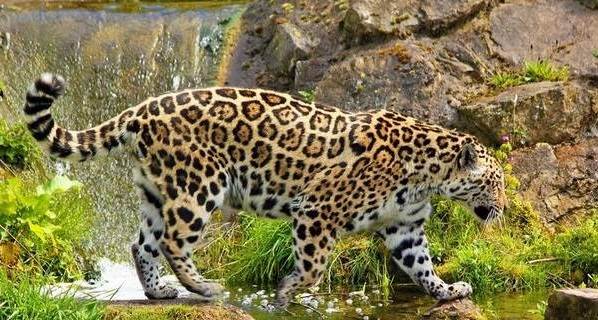 In nature there is also a black jaguar — an animal that is not considered a representative of a separate species, but is the result of the manifestation of melanism.

Jaguar — a bright representative of the fauna of the New World and lives in Central and South America. Because of the fierce hunting, the animals were almost completely destroyed in Uruguay and El Salvador.

In the southern United States, its habitat has been reduced by a third for the same reason. Jaguar — a resident of the humid tropical jungle, can live in marshy zones and in areas covered with xerophytic bushes. 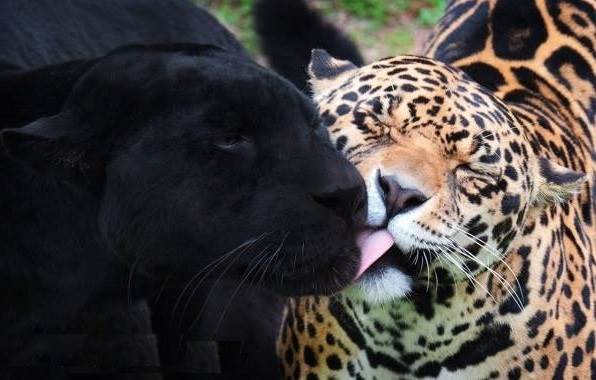 In the photo, black and spotted jaguars

It also occurs in a wooded mountainous area, but at an altitude of not more than two kilometers, as well as on the coast of the ocean. Scientists have up to nine different types of jaguar. The animal needs protection and it is believed that one of its subspecies was completely destroyed.

The nature and way of life of a jaguar

This wild, graceful beast lives in places where pristine nature reigns and there is a diverse animal world. Jaguar prefers a single way of life. Like all predators, it protects from encroachment its territory, which is quite extensive and can occupy from several dozen to one hundred square kilometers.

The size of personal plots depends on the variety of the landscape, the conditions, the abundance of food that can be obtained from it, and also from the sex of the animal. Protecting their possessions, the jaguar behaves intolerantly and shows extreme aggressiveness towards ocelots and pumas — to their relatives and representatives of the cat family. 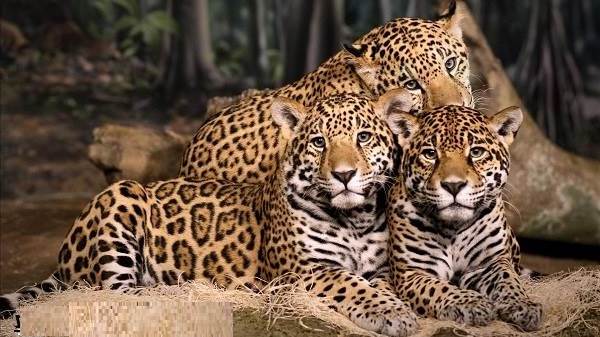 But he treats individuals of his kind quite patiently, even showing friendliness in a collision on hunting grounds. While producing food, jaguars often move from place to place, and a few days later they come back to again guard their prey in the former territory.

On animals, the jaguar begins hunting with the onset of twilight, especially active immediately after sunset and in the pre-dawn hours. This beast can not run for long, but at short distances with it, few can compare. The speed of the animal jaguar is about 90 km / h.

Pursuing his prey, he makes guttural abrupt sounds resembling grumbling. And in the night often heard his deafening, chilling soul, roaring. Indians of South America seriously believe that the jaguar has special abilities: has the ability to hypnotize victims, is able to imitate the voices of animals and birds, beckoning and deceiving their prey.

Of course, these are only legends, but the spotted color of the animal allows it to merge with the surrounding landscapes and, remaining unnoticed, trap its victims. Often he lies in wait for his prey in dense high grass. Or hiding on the shore of reservoirs, waiting for the animals themselves to come to a watering place. 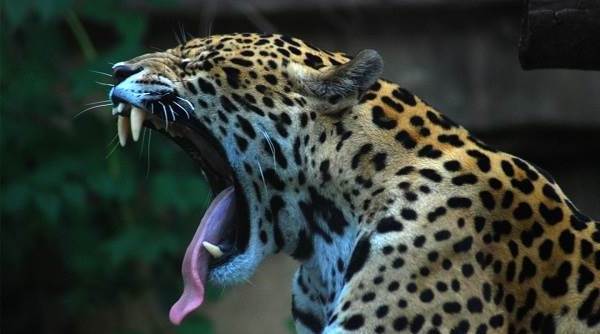 Attacking, this deadly huge cat rushes from side or from the back, knocking down its victim with the strength of its swift body. Such a blow is either fatal, or leads to serious injuries. And even large and strong animals such as cows, after jumping the jaguar, die on the spot from a fracture of the spine.

His jaws are so powerful, and his teeth are so sharp that often he bites the prey on the skull. Interestingly, a jaguar never pursues its victims if they found the danger in time and rushed off to escape.

Also, the animal rarely attacks people, especially if it is not provoked. And recorded cases of cannibalism are usually associated with self-defense. There are also examples when a jaguar pursued a person solely out of curiosity. Despite the extreme danger of the animal, many have the desire to keep jaguars in large private homes and in private plots.

Any animal, and even a predator, is interesting for its habits, character and manner of behavior. But you can keep a jaguar only if you strictly observe the conditions of keeping and feeding. 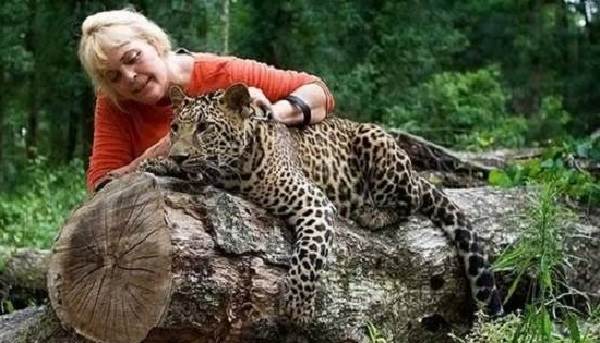 And should be away from a well-equipped aviary with an iron door opening with cables to protect the animal. You can buy a jaguar in nurseries, zoos and private individuals. However, the matter is complicated by the fact that this species is listed in the Red Book and is listed as a rare animal. The price of a jaguar can reach several tens of thousands.

Animal jaguar as its victims can choose ungulate fauna: tapirs and bakers, can attack capybar and caiman. His food may be foxes and monkeys, as well as smaller animals: rodents, snakes and birds.

The predator begins his dinner with the head of the victim killed, gradually reaching the rear. When the size of the booty is too large, full of it, the beast leaves its occupation, sometimes returning to finish the remains, but not always, almost never eating carrion. 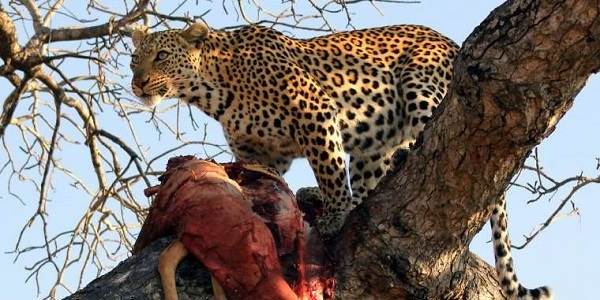 If the beast is developed on the territory of the ocean coast, its favorite delicacy and special delicacy can be turtle meat, the shell of which the predator can easily bite. Jaguar can attack livestock.

Unlike its relatives, representatives of the cat family, the jaguar swims well, often pursuing the victims in the water. He is a wonderful fish catcher, and he does it in rivers and streams. And settling on the ocean coast, he searches for and digs out of the sand turtle eggs.

Jaguars do not have a certain period for mating games. Seeking the location of females, animals are sometimes collected in small groups, which is unnatural for jaguars who prefer solitude in normal conditions.

In the photo the cub of a jaguar

At the time of choosing a partner, the ability to have offspring in which comes in the third year of life, males roar deafeningly and passionately. Despite the aggressiveness of this kind, fights between rivals in the struggle for the female usually does not happen. And after pairing, the partners leave each other forever.

And after about 100 days, in her lair mother gives life to several cubs. Their color is darker than that of their parents, and the spots on the skin are almost continuous.

Children spend about six weeks with their mother until they learn to hunt on their own. And after learning everything, they leave it forever. In captivity, a jaguar lives to the age of 25, but at large the animals die much earlier.