Lorikeet is a very unusual bird , with bright plumage and iridescent coloration. In total, there are up to 10 subspecies of lorikets. For the first time these birds were found in New Guinea, and only in 1874 birds were brought to Europe. 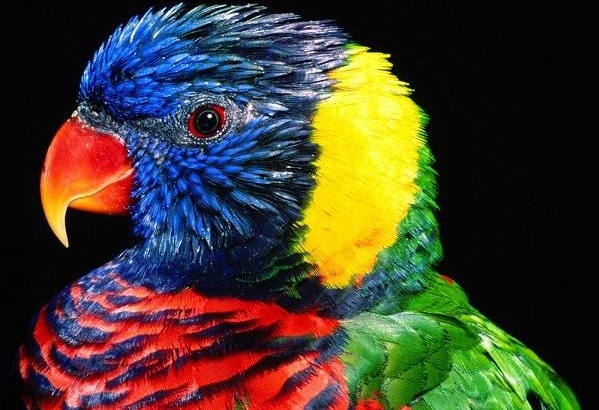 Features and habitat of lorikete

Lorikets are medium sized birds . The body length of an adult individual is from 17 to 34 cm. Feathers on the head are saturated blue, the body in front is yellow, orange or purple, the plumage of the wings and tail are always green-yellow.

This color is almost all multi-colored loriketov , but there are individuals with distinctive features of plumage. In any case, regardless of color, all lorikets are very bright birds . In a visible way, the male and the female cannot be distinguished, so even experienced breeders do DNA analysis.

The nature and lifestyle of

Lorikete Lorikets, very playful and active birds . The peculiarity of this type, the presence of a clear, loud voice. Unlike other breeds, Lorikeet does not imitate sounds and conversation very well. 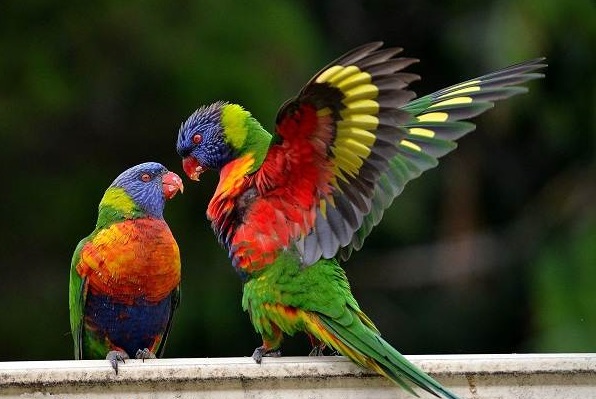 Not many representatives of the species can remember many sounds, but they are not pronounced clearly or expressively. Despite its activity, the birds are quite shy. Sometimes, even for no apparent reason, panic attacks occur in parrots, they rush around the cage and swing their wings strongly. Often the consequences of this behavior are various injuries and fractures. It is necessary to protect lorikets from loud sounds and potential danger.

The cage for lorikets should be chosen spacious, this is especially true for pets who do not often fly. Obligatory equipment housing parrots , is the presence of different toys, swings, poles and tanks for swimming. In nature, parrots love to crawl through trees; for convenience, branches from fruit trees should be arranged in a cage. 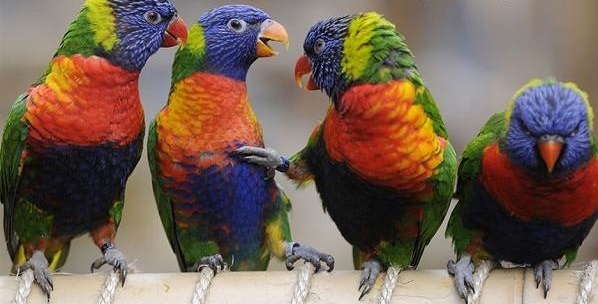 An important role for a normal existence is the presence of a mineral stone in the cage, with its help the pet will get rid of growths on its beak. This condition is necessary because, due to the absence of a stone, lorikets may begin to nibble on the bars of the cage, as a result of which there is a high probability of injury. If there is no stone, a wooden bar will do, but the effect will be smaller.

The food of the lorikets is specific and differs from the preferences of other parrots . The basic diet of birds is pollen from flowers and nectar. If such a pet lives at home, then this feature is taken into account when feeding.

For a full-fledged existence, the bird twice a day, should receive pollen, and the concentration of the substance does not matter. If you buy food in specialized pet stores, it should contain a lot of pollen.

Nectar for birds can be bought in the form of a dry mixture, it must be diluted with water before feeding. If it is not possible to purchase ready-made nectar, it can be made at home, it’s enough to dissolve floral honey with purified water. This mixture is given through the drinker or wet it with pieces of fruit, pre-cut. 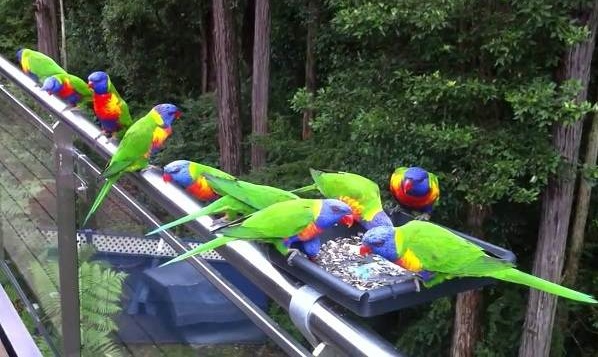 In addition to pollen, nectar and sweet fruits, the diet of lorikets can be supplemented with grain feed up to 15%, vegetables up to 20% with an abundance of greenery, wheat germ and other grain crops will do. In the wild, lorikets feed on flowers, so during flowering you must give your pet rosehips, chamomile, hyacinths or dandelions.

A balanced feed for lorikets is very important, because for a normal life, the parrot needs the whole range of beneficial trace elements and minerals. An important factor in a healthy existence is the presence of clean water in the water bowl, regardless of the type of food.

A total of 10 subspecies of lorikets have been registered. Almost everyone can be kept at home. Below are the most common types of lorickets:

Iridescent Lorikeet was named because of its bright, diverse plumage. It is believed that the coloring of this parrot of all colors of the rainbow, although purple feathers are rare. 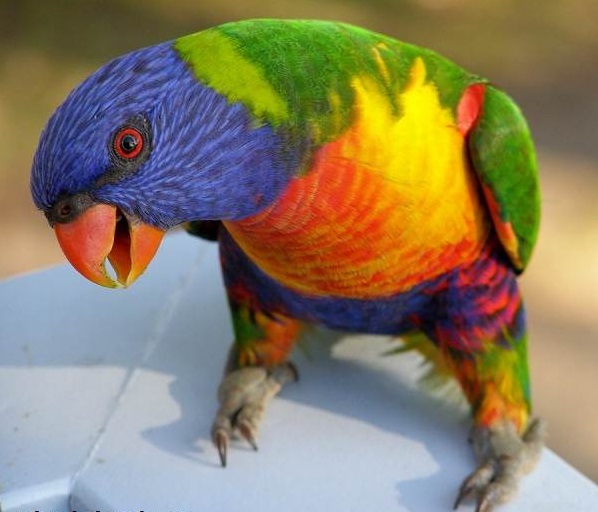 In the photo Rainbow Lorikeet

Because of such a bright color, rainbow Lorikeet often becomes the prey of poachers and predatory snakes. Birds nest high in the trees, nests form at a height of 25 meters, but even this sometimes does not save the laying of parrots from various dangers. Sharp-tailed Lorikeet . A distinctive feature of the species is the presence of a purple spot on the back of the head and red feathers on the chest in a black and blue transverse strip. 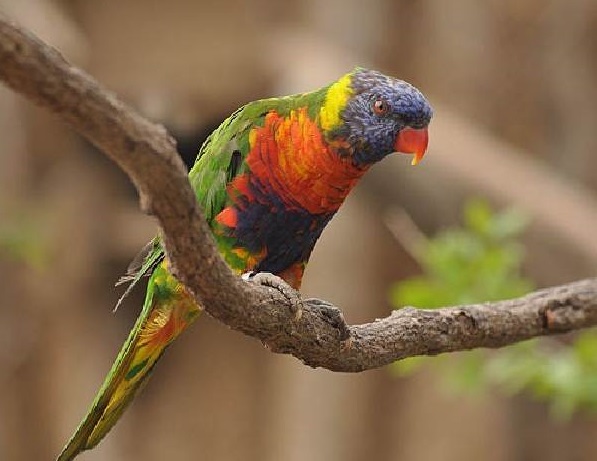 On the photo is the Rainbow Lorikeet

Lorikeet fly wingspan very quickly up to 30 cm, although the weight of an adult individual is not more than 130 grams. Feathers on the tail and wings of a green color; Musk Lorikeet is gradually narrowed towards the end .

The main color of the parrot is green, the head is dark red, on the nape smoothly turning into blue. The beak of a black lorikete with a bright orange finish. Birds do not like dense forests, often live near human settlements. If they receive proper care in captivity, they successfully breed and live for a long time. 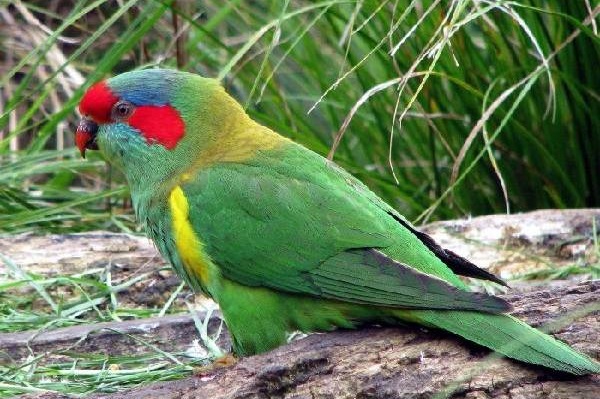 Musk Lorikeet Parrot on the photo

Lorikeet Goldi is the smallest representative of the species, the weight of an adult parrot is up to 60 grams. Features of appearance are the presence of dark red and bluish strokes on a green and yellow background. 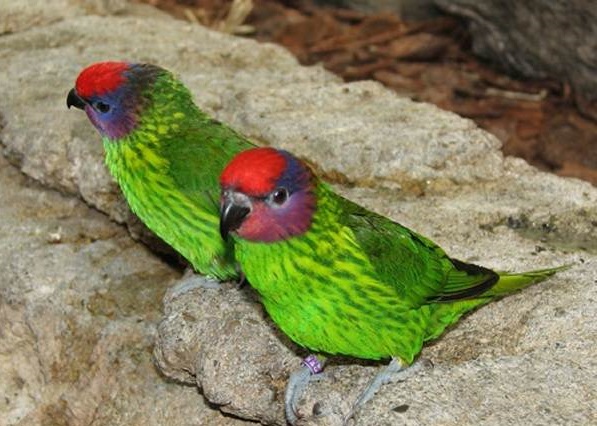 In the photo Lorikety Goldie

The head and upper torso are red with purple arches around the sockets. It adapts well in any locality, lives in flocks, chicks hatch in hollows of tall trees Meyer’s yellow-green lorikeet . The bird’s chest is covered with bright, yellow feathers with dark edging, the head is green, only on the sides there are small yellowish spots. 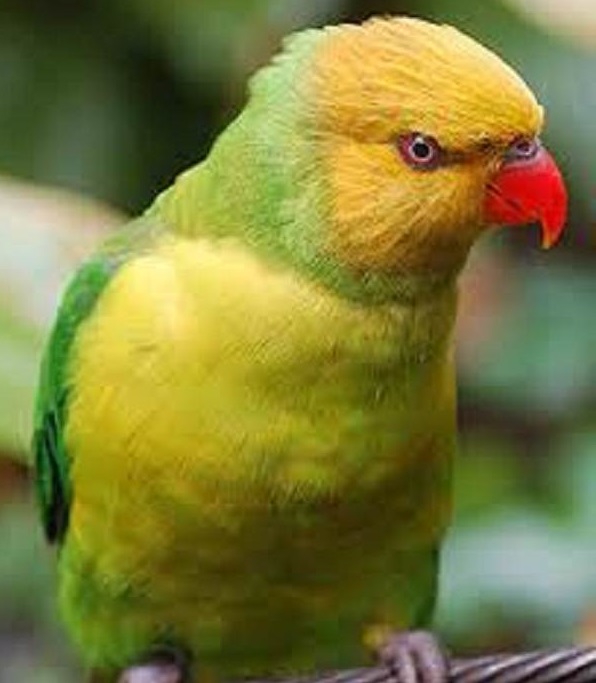 In the photo is yellow-green Lorikeet Meyer

The beak of a bird is yellow or orange. For the maintenance of the house is suitable not very big and spacious cage. Birds have a thin, not loud voice that will not interfere with the household.

Lorikets quickly adapt to life in captivity. If all the rules on the content are met, the parrots successfully multiply. In order for the birds to feel safety while hatching eggs, it is necessary to protect lorikets from external stimuli, such as a sharp temperature drop and loud, harsh sounds. 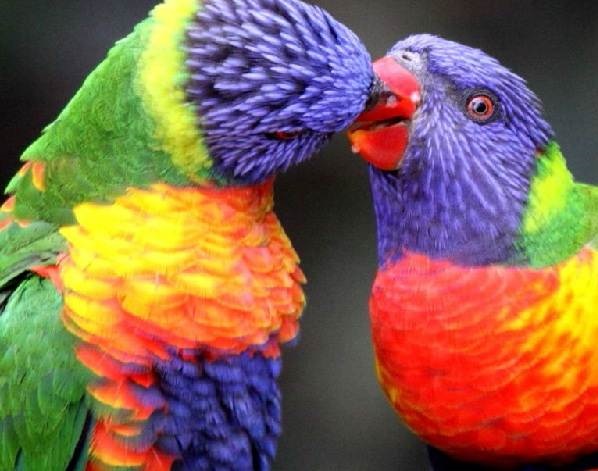 In the laying of the lorikete there are often two eggs, less often three and almost never one. 21-23 days after laying, chicks hatch. Sometimes after birth, lorikets pull plumage from the young, but this is a temporary phenomenon and after 38-40 days after birth, young parrots are completely fledged. 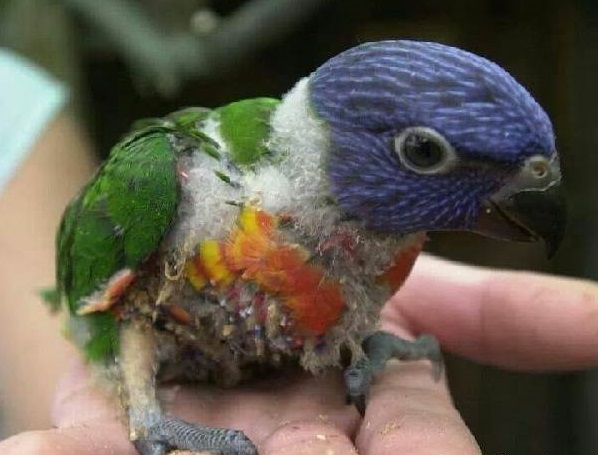 It is necessary to buy a multi-color lorikete no earlier than 50-60 days after birth. Young Lorikeet should have a characteristic color plumage, with no visible flaws.