The Toukhan is a unique bird that stands out not only for its bright coloration, but also for its special temperament. These birds are considered exotic, although today they can be found in almost every zoo. The fact is that such attentive creatures are very easy to tame, which makes it possible to keep them even at home. Let’s turn to the description of the bird of the toucan. 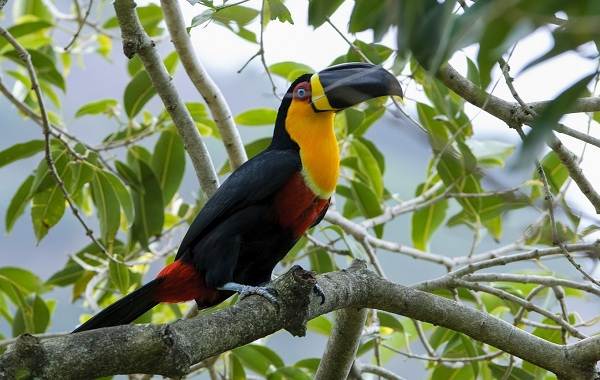 Description and features of the family

The family of Tukanian birds unites a huge number of different species and genera. However, they are all very similar to each other, so it is easy to give them a general description.

First of all, all tropical toucans are united by the presence of a large and bright beak in birds. Inside the beak is a no less long tongue, helping the birds to eat. 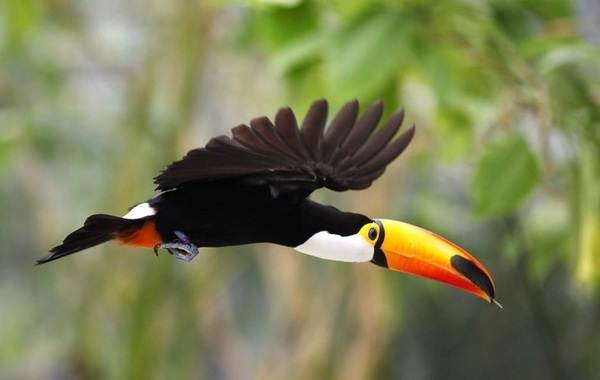 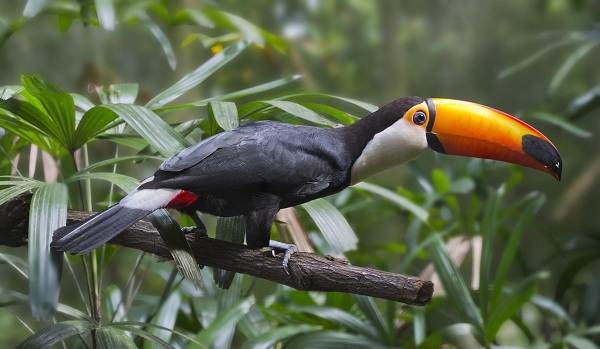 The color of each species of Toucanian birds has its own characteristics, therefore, describing the whole family of birds, it is difficult to say something specific about the color of their feathers. Only the presence of white and black plumage on the body of birds is similar.

In addition to a bright beak and feathers, it is worth mentioning about the incredibly beautiful eyes of birds. Most often there is azure blue, but you can see the owners of lighter or darker shades. 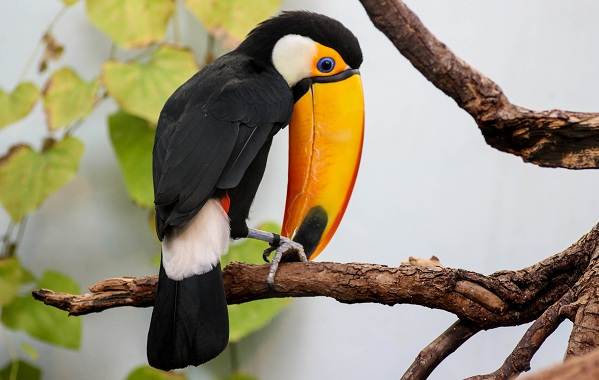 Now let’s talk about the genera and species of the family we examined. At the moment, there are 6 genera and about 40 tukan species. Many of them are poorly understood or are very rare in nature. We will consider the most interesting types from existing ones.

This species is considered one of the most common. Such birds can be found almost throughout South America, including in South Mexico. These iridescent birds have a body length of about 50 cm and a mass of up to 400 grams.

Looking at the plumage, the actual one can see almost all the colors of the rainbow. And the color of the beak includes green, blue, yellowish, orange and red. Black feathers on the back and lower body frame the yellowish-green chest with a small red stripe. Some toucans have a small orange strip on their side.

Nutrition and lifestyle of rainbow birds does not reveal anything special. However, it is noteworthy that they eat whole fruits of the trees without opening them. Thus, the seeds contained in fruits and berries can germinate after direct digestion in the stomach of iridescent toucans.

Such species as lemon-grass, red-breasted and white-chested toucan, in addition to the coloring of the tail, are slightly different from rainbow birds. However, it is worthwhile to talk separately about the largest representatives of this kind. 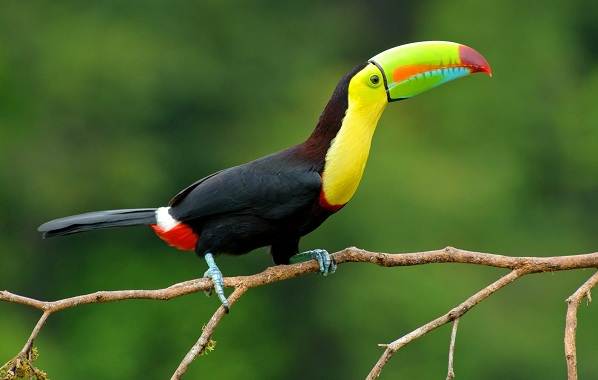 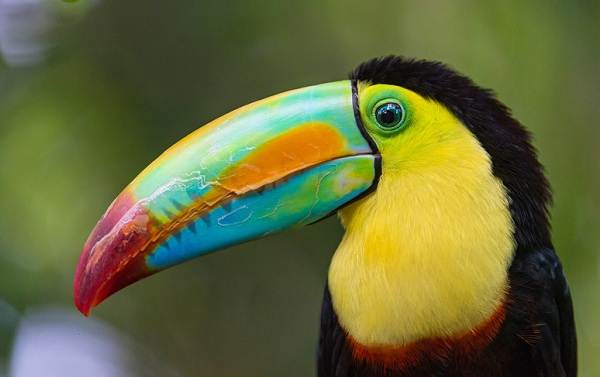 This species of birds is the most common on our planet. They are often compared, similar to Toucan, as the Atlantic bird dead end. Dead ends, although not impressive in size, have a black and white plumage and a rather large orange beak.

The body weight of a large tukan exceeds half a kilogram and can reach 750-800 grams, and their body length is about 55-65 cm. Unlike other representatives of their family, these rather big birds do not have bright, memorable plumage.

But despite this, they look very neat and elegant. The body of animals is covered with black and white feathers, and their beak has a bright orange color.

This species of Toucan is common throughout the territory of both South and North America. 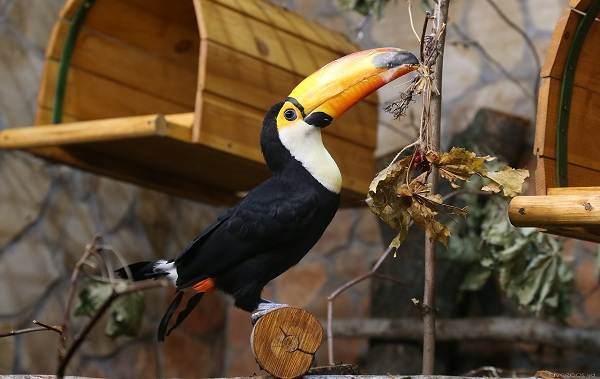 A special kind of family tukanoobraznyh represent tukanety — small birds with a beautiful and bright plumage. The most popular representative of the genus is the emerald tukanet.

The maximum possible body length of these birds is 35-37 cm, and the mass is only 150 grams. Their feathers are painted in a characteristic emerald green color. The beak is large, as a rule, black and yellow.

For the Tukanet genus, this type of evolutionary change is characteristic of parallelism. This means that the birds that settled in different habitats differ somewhat from one another, acquire new signs. However, they still retain a considerable part of the common features, because they belong to the same systematic category.

Areas of America are widespread. 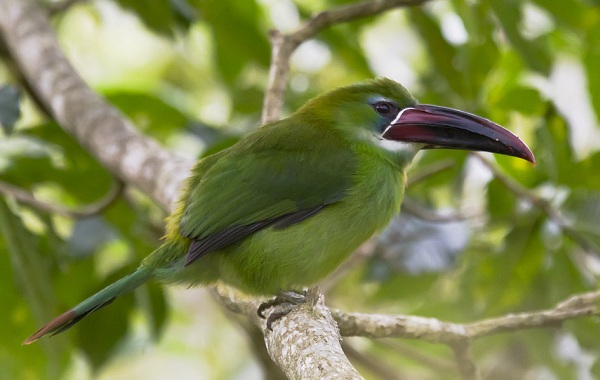 Arasari is another genus of the Toucan family. Its representatives have, as a rule, not very large parameters: growth — up to 45 cm and weight — up to 300 grams.

Montenegrin species has soft black feathers, «diluted» with yellow plumage on the chest and a small red stripe closer to the lower part of the body. Beak, as a rule, is black-yellow.

The bird, like other representatives of this genus, is common in South America. 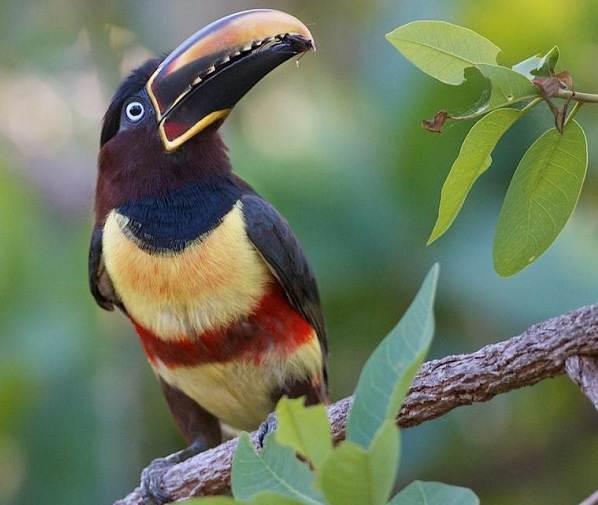 This bird, perhaps, can be considered one of the most unusual in the family. Small and accurate birds, painted mostly in dark colors, have a characteristic blue «ring» around the eye and small «blotches» of red and yellow flowers throughout the body. The beak is also black with a slight red in its lower part.

The growth of the selenider is only 30-35 cm, and the body weight can reach 100 grams. Birds are common in South America. They prefer important habitats, so they often settle in areas of tropical rivers and lakes. 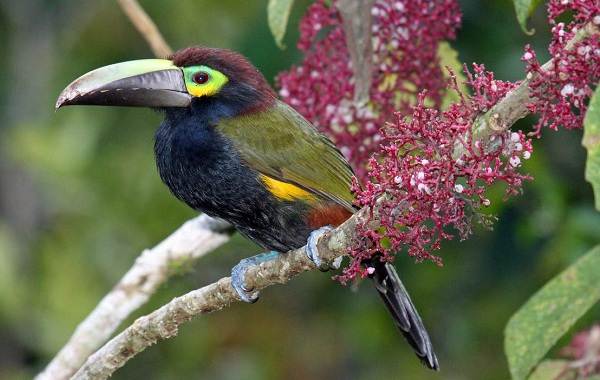 What about the bird of the toucan? As noted earlier, this article is about tropical birds preferring a warm and fairly humid climate.

In addition to climatic factors, some other influences on the prevalence of toucans. For example, because of poor fitness to fly, these birds are very fond of «scrambling» through trees. Accordingly, for normal livelihoods they need forest expanses where they can find not only a bed, but also good food.

Considering all these factors, one can come to the conclusion that the best habitat for toucans is forests of South and North America. On the question of whether a migrating bird is a toad or not, you can give a negative answer. This bird is very comfortable in its habitat, which they do not leave for a long time. 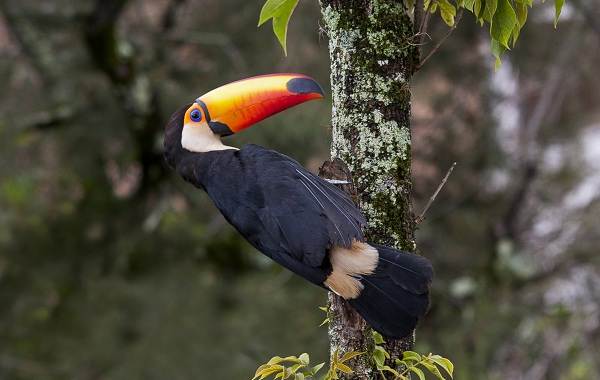 In fact, these beautiful birds can be found on the territory of countries such as Brazil, Argentina, Bolivia, Ecuador and some others. They are lodged in hollows, created independently or «repulsed» in small mammals.

Life in the woods for the Toucan is safe enough. However, animals often become victims of poachers, who often do not just catch birds for illegal sale, but also kill them, wanting to enjoy the beautiful and soft plumage. Hunting for birds for their beaks is also widespread.

Toucans are herbivorous birds, who carefully select what can be eaten. What does a tukan eat? As a rule, they eat tasty fruits and berries, characteristic for their habitats. A favorite fruit is a banana.

However, these birds are able to eat not only plant food, but also various insects, arthropods and not very large reptiles. It is not uncommon for them to «steal» very young chicks or their eggs from nests. 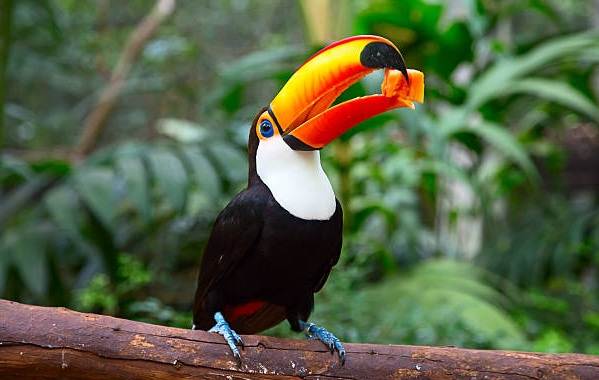 In the case of food, the beak of toucans plays a very important role. A long tongue allows them to get some food, and especially insects. A special structure of the beak helps to disclose the fruits and eggs of other birds

These beautiful animals choose one partner for life. Approximately once a year and a half they have chicks: from 2 to 5 representatives. Considering the photo of birds of toucans on trees, you can see very beautiful sparkling eggs that do not differ in size.

Parents take care of their offspring and protect them. Indeed, chicks need constant attention. They are born absolutely naked, helpless and unable to see. However, they only have 2 months to fully adapt, and sometimes a period of 6 weeks is sufficient. 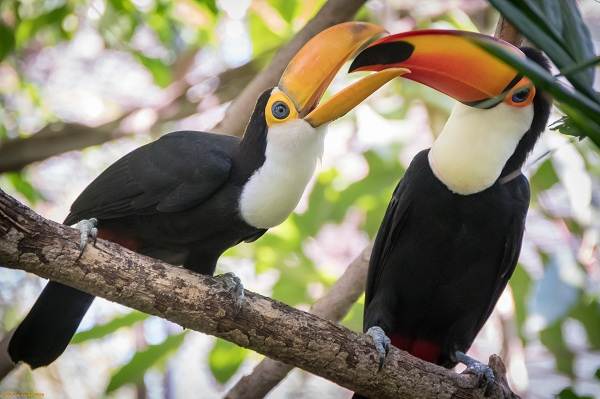 After 1.5-2 years, the chicks of the Toucan are capable of a fully independent existence. By this age they reach the necessary size and are already able to look for a partner and start offspring. And their parents, as a rule, can start taking care of the new offspring.

Turning to members of his family, toucans use loud cries. Sometimes they are even capable of «parodying» sounds produced by other tropical animals. Often this way, birds escape their natural enemies, which are strongly irritated by such sounds.

These exotic birds live not very long — only about 15 years. Do not forget that 2 years from this date go to the birds for adaptation and adaptation to a full adult life. Only after this time, toucans are able to live separately from their parents and acquire their own offspring. 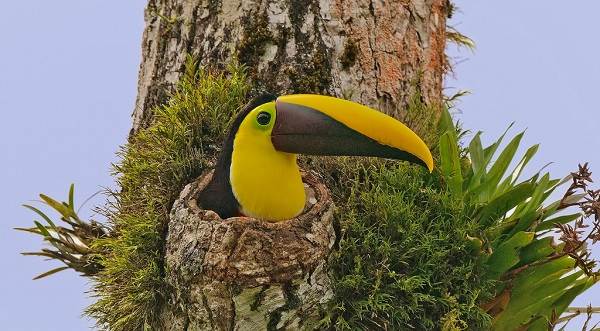 Some members of the family die even earlier — at the age of 10-12 years. This may be due to the increased work of poachers or to any congenital malformations of birds.

In zoos or houses, Toucan can live a much longer time — 40-50 years. Thus, constant attention is paid to the birds of the population of people, as well as the complete safety of their existence.

By nature, toucans are very peaceful and friendly. Therefore, with proper care can safely live in cages of zoos or even in houses and apartments. Birds quickly get used to people and start to trust them.

An important condition is the creation of a design that simulates a beloved bird’s habitat.

At the same time, tukanoobraznye trust the man his diet. Without having to independently produce food, they eat almost everything that will be offered by people. It can be both protein products, and insects, and even amphibians of small sizes.

However, those who decided to have such an exotic bird, like a toucan, should remember the cost of buying such an animal. The purchase of a poultry in our country costs at least 60,000 rubles, and also requires the necessary documentation and confirmation of decent conditions of detention. 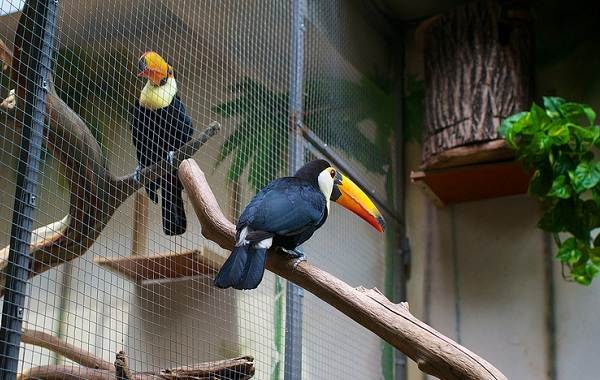 Toucans need constant attention and care, which they must receive from their master or zoo keeper.

So, in this article we have considered the features of very beautiful exotic birds — toucans. We advise you to visit zoos in which all kinds of these beautiful animals are represented. After all, each of the species is unique in its own way and is an extremely fascinating subject for further study.