Is in the old pheasant fabulous feathered looking on which is impossible to tear your gaze. From a distance, this bird resembles a snowflake, a feather light flying. The white peacock the most beautiful bird on earth. It contains tenderness, beauty and unearthly magic.

In many parts of the globe that is magical properties and attributed these amazing birds. From the early 18th century, they are familiar to people. They studied, loved and tried to tame. It happened without any problems. 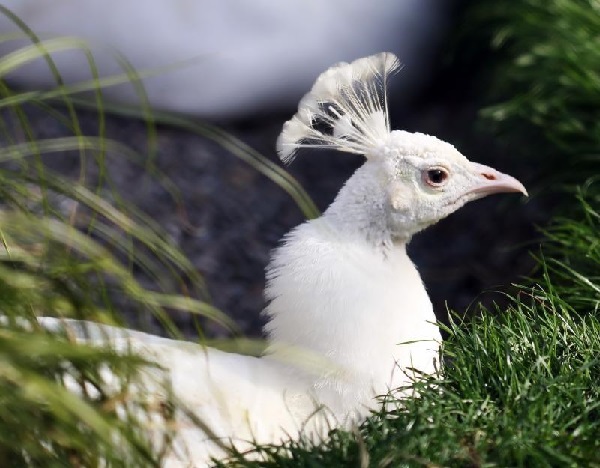 In the courts of European monarchs peacock was the most amazing, elegant decoration. The Eastern people say that these birds are magical creations of nature. In proof of this there is an image of Buddha sitting on top of the bird.

Description of white peacock can be found in historical epics. There is not one species of these birds, but the white General competition. It combines tenderness, solemnity and divine splendor. You can not indifferently to look at how white peacock spreads its tail. Such a sight is difficult with something to compare.

In many countries around the world white peacock is the embodiment of beauty, rich life and a long life. In Asian countries people claims that he can predict the attack of tigers, snake-like, approaching storm. In fact, there is no magic.

The secret is in having good eyesight of birds, and strong vocal cords. As soon as the bird notices the danger, she immediately accepted to shout loudly. If we talk about the voice of birds, then he is not so handsome as the exterior. Worrying peacocks can emit a sharp sound like a cat. 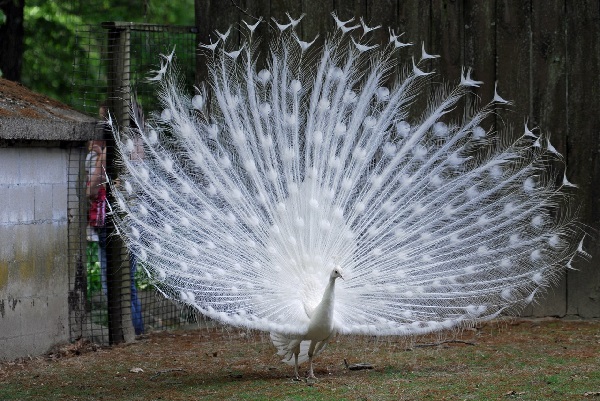 Incredibly beautiful feathered tail does not prevent him from flying. The bird just moves along the ground without any problems. The problem for the peacock to get along with the other neighbors. Therefore, individual birds need an aviary.

Between the female and male of these birds there are differences. The male has a beautiful, long and gorgeous tail. The female in terms of tail nature cheated.

Birds have a strong form. Their length is about 100 cm of Their small head is not proportional to some large body. An important feature of birds, giving them a special charm is a crown of feathers on his head. 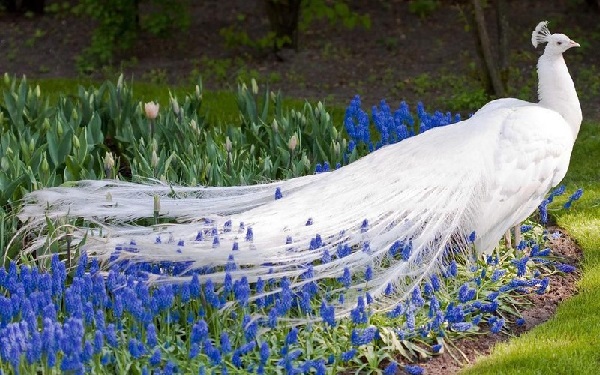 All in all the appearance of a bird seen Royal grandeur. There is so much tenderness and ease that sometimes it is compared with the dandelion. The feathers of the white peacock charm On them if you look closely, visible lace beauty in the form of the eye.

In the wild they are found in India, China, Thailand, Bangladesh. Birds like the jungle, nearby places, rivers, dense stands. Sometimes they seduce the mountain slopes are covered with bushes and different vegetation. Peacocks not too shunned people. They can live near human lands. Therefore, people were not hard to make them homemade. 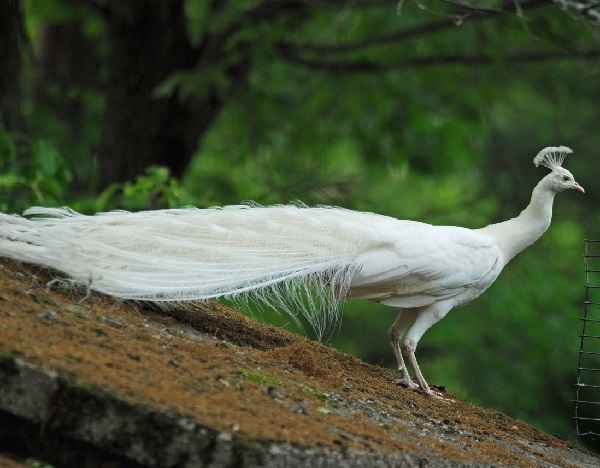 People have repeatedly tried to cross the white peacock with color. Never such an experiment was not successful. The color of the birds was not ideal. Breeders managed to produce an incredibly beautiful black-and-white peacocks, the beauty of which is indescribable.

These birds live in small flocks. Are awake during the day. At night sleep in the trees. They are able to fly well. But great distances for them to overcome is not easy. 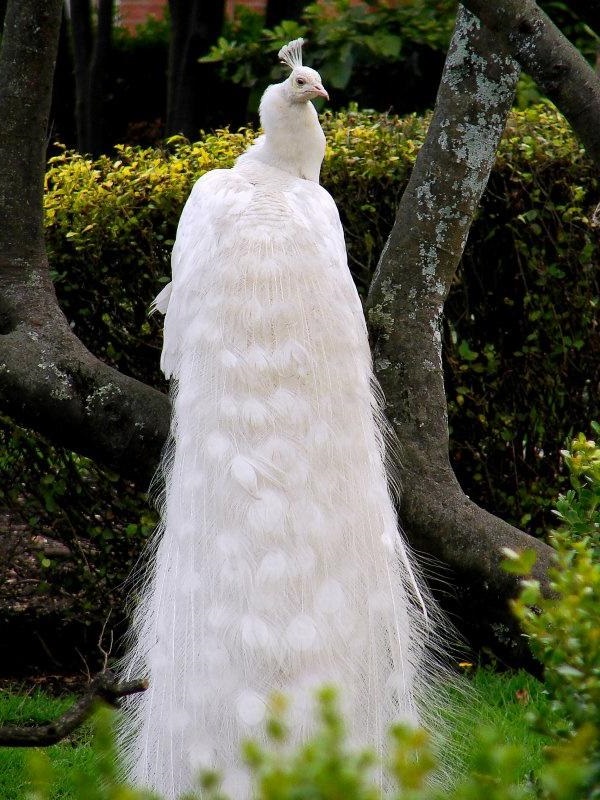 Males adult females resort to their luxurious tails. According to the signs we can understand that the birds began mating season. At other times they walk with folded tail, and he is absolutely not an obstacle, despite the fact that long.

In the wild birds have a considerable number of enemies. Terrible they tigers, leopards. Among these predators is attributed and the man who sometimes would like to profit from the meat of these birds. And selected the young, the old meat is tough. 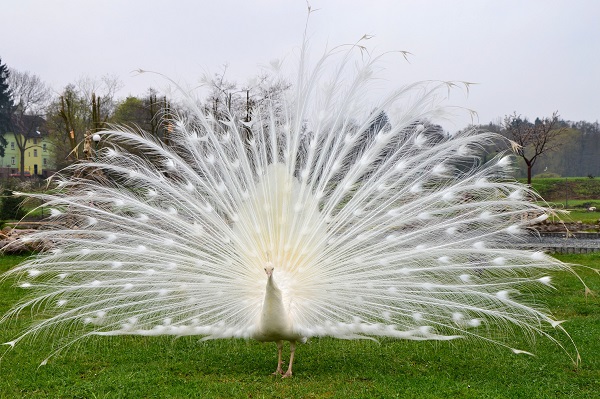 Mostly birds behave quietly and modestly. But the approaching storm changes their mood. Birds of worry and shout loudly, alerting everyone of the possible dangers.

At home they have suddenly somewhere there arrogance. They are prejudiced against neighbouring birds, and can sometimes even injure their beak. Birds adapt quickly. They come from warm places, but cold to them is not terrible. 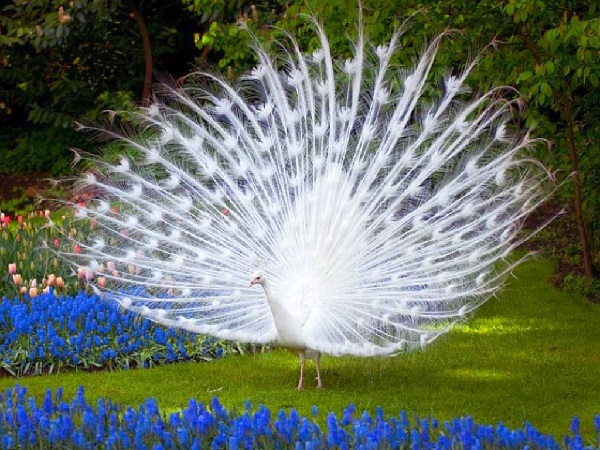 A similar response can be given and white Indian peacocks. They are easily and without problems to adapt to any environment and are proud by nature, with regard to the neighborhood. Any feathered they can in a fit of rage even to peck, if they’re not satisfied.

Living in the wild peacocks need plant food. They prefer nuts, berries, small fruits. They need in the insects, the snakes. If peacocks live near people, they are not averse to profit by the plants from the garden. They love cucumbers, tomatoes, peppers, bananas. 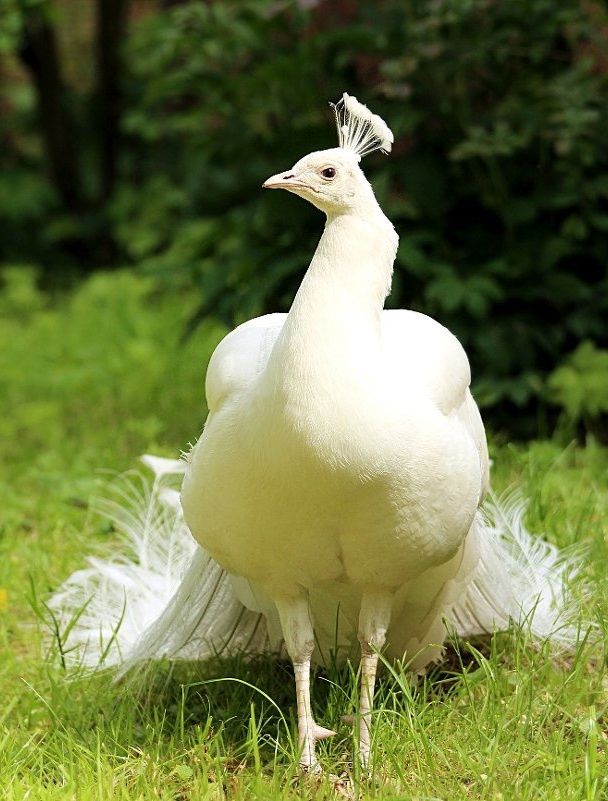 The peacock at home shall be fitted with a grain forages. In this food the breeders mixed with crushed boiled potatoes, greens, vegetables and fruits.

For the birds is enough to have two meals a day. During reproduction, it is desirable to move to three meals a day. Very useful for them, the seed sprouted in the morning, especially in winter.

Approximately 2-3 years of age, birds are able to reproduce. The male spreading its gorgeous tail and emits a calling sound in order to attract a female. He succeeds without a problem. Sometimes between males may occur, the real fight for the lady. Birds are polygamous so one male often have 4-5 females.

The breeding period starts from April to September. One female can be 4-10 eggs, which can be seen lying on the ground. Just a month from these eggs there are kids with yellow plumage with white wings. 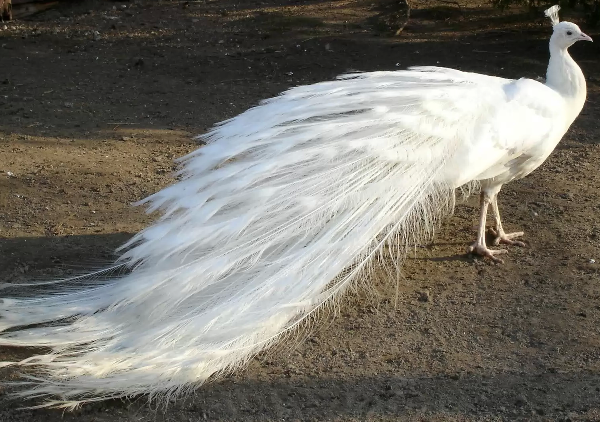 One female is able to do three laying in one season. At home often help birds to hatch the Chicks and other representatives. We live in the wild peacocks maternal instinct is poorly developed.

The life expectancy of white peacocks 20-25 years. Nowadays the opportunity to buy the white peacock is not only the oligarchs. They are bred in special nurseries and sell to everyone. The price of white peacock high, but its beauty is worth it. On average, buy a pair of these birds for 85,000 rubles.