Features and habitat of the Tibetan fox

The Tibetan fox is the smallest representative of the entire fox genus. An adult individual grows only up to 70 cm, or even less. At the same time, its tail has a length of up to 45 cm, and the animal weighs no more than 5, 5 kilograms. 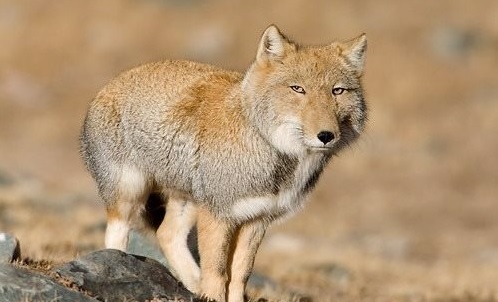 That is, this fox is very small. She would have looked even smaller if not for her furry outfit. In order to protect from the winds, the fox has a luxurious, warm fur coat. The fur coat is made of thick wool, and closer to the skin there is also under-fur. Such a fur coat saves not only from the winds.

The fox lives in such climatic conditions, where in the summer the thermometer shows a temperature of +30 degrees, and in the winter -40. It is clear that only in such reliable “clothes” can one survive the frost and heat. However, the fox’s fur, although warm, does not represent special value, it does not have high quality.

Very peculiar is the head of the animal. The growth of wool goes in such a direction that it seems that the chanterelles have a square head. And on this head are located, rather narrow eyes. Sharp ears complete the picture. The expression of the muzzle is such that the name «Tibetan» and asks for the language, too calm and calm look at this fox.

Tibetan fox lives in the steppes and semi-deserts of Tibet, it is no wonder that it bears that name. But you can find such an animal in India, especially in the north-west direction. Moreover, this fox is found even in China. 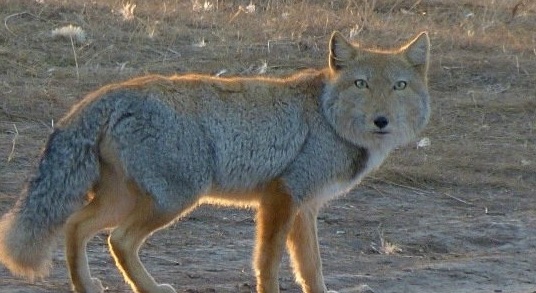 The nature and lifestyle of the Tibetan fox

Tibetan fox does not like increased attention to his person. That is why she spends her free time hunting in burrows, which she finds among rocks or any crevices. If such a secluded place cannot be found, the fox itself can dig a suitable shelter for itself. Until now, zoologists cannot provide a complete picture of the life of this animal — this animal leads too close life, and even make a photo of a Tibetan fox, and even a great success for a professional. This suggests increased caution of these foxes.

And yet, some facts about the life of the animal are known. Interestingly, these foxes go hunting in pairs — male and female. The prey is driven by both predators, and then divided equally. For hunting, the fox has a surprisingly delicate ear that allows you to hear the pika at a very long distance. 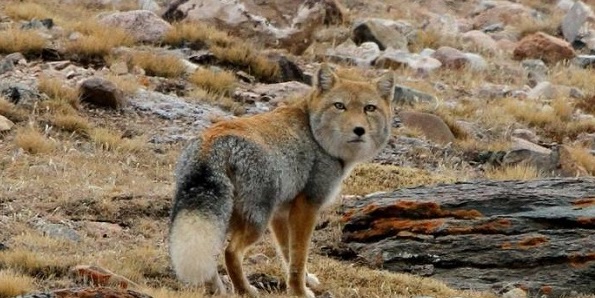 Hearing helps the fox to remain unexplored, because the ear hears not only the prey, but any danger, even if it is presumed. Like all animals, the animal has a certain territory, which it considers its own and on which it is perfectly oriented, thanks to its sense of smell.

But it protects this territory very reluctantly, or rather, quite calmly refers to the fact that if any other of their relatives settles here. It is not uncommon for these foxes to live in large numbers very close to each other and hunt in a common area, without any clarification of the relationship.

The nature of this predator is very friendly to itself similar. Foxes prefer to lead a modest and unobtrusive lifestyle. Even the sound once again do not allow themselves. Only in its close “family circle” can a fox “communicate” with low barking.

The Tibetan fox feeds mainly on pikas. Pike — creatures that are very similar to mice, but are close relatives of hares. True, they do not have such long ears, and their hind legs are no longer than the front. They are also called senostavkami, they got this name for the fact that too much hay is harvested for the winter.

Pikuhi so abundantly colonize these areas that they are the main food not only of Tibetan foxes, but also of many other predators. Tibetan foxes can diversify their diet and other rodents. They perfectly hear the mouse squeak, so they hunt them, if they can catch a squirrel, they will not give up on it.

Chipmunks, voles, hares — can also become a dish for this predator. Birds whose nests are located on the ground, as well as eggs in these nests, will also help the fox to satisfy hunger. 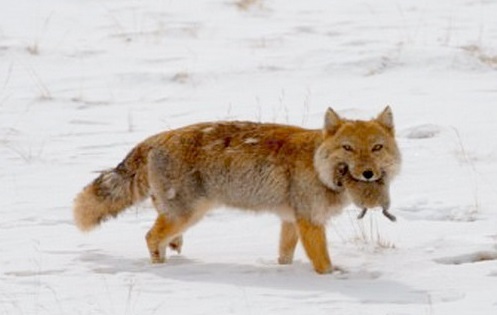 If it is really very hungry, then insects, lizards, and all small things that can be caught and eaten go into food. In food, Tibetan foxes are not capricious. But still, pikas remain a favorite dish.

Reproduction and life expectancy of the Tibetan fox

The marriage period of Tibetan foxes begins in February. I must say that these predators are very faithful to their «spouses.» As soon as the fox reaches the age of 11-12 months, it finds a mate with which it then lives until death.

After the “love date” the female bears cubs from 50 to 60 days. Scientists cannot say the exact time, because after the female has the cubs, she still does not leave the lair for a very long time. Cubs are born from 2 to 5. These are completely helpless creatures. They are completely naked, without hair, blind, and weigh only 60-120 grams. 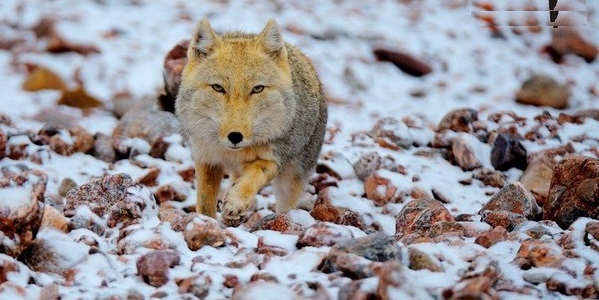 Fox is a very caring mother, and does not leave her children for an hour at first. She warms them with her warmth and feeds her with milk. She herself feeds the head of the family — the male. The cubs themselves from the den are also in no hurry to leave.

As long as they are too small and helpless, they are near the mother, and only a few weeks later, when they grow up and gain a little strength, the foxes venture on the first, very short walk near the hole.

Walks gradually become longer and farther from the lair, but the foxes do not go out on their own. They follow only the mother everywhere. The same, in turn, continues to monitor the safety of babies and teaches foxes all the wisdom of life. Already at this time, the male feeds not only the female brought prey, but also foxes. It is time to feed them meat. 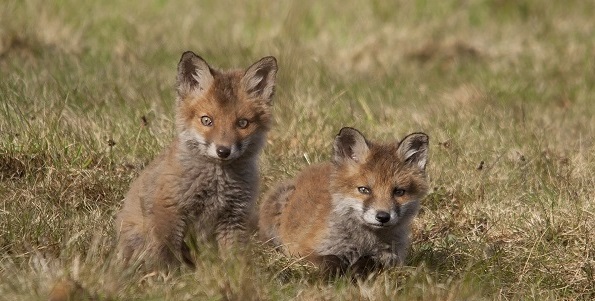 Little by little, the foxes themselves learn to hunt and very soon get food on their own. But they don’t leave their parents. Only when they become sexually mature do they leave the parental lair and leave to find their mate.

The life of a Tibetan fox is only 10 years, but even this period people sometimes shorten, exterminating rodents and pikas — the main food of foxes, set dogs on them, and they simply kill because of the fur, which is not valuable at all. Therefore, most often, the age of this amazing animal does not exceed 5 years.