Features and habitat of the Triton ordinary

Common triton belongs to the class of amphibians. Because his life flows in two elements: water and land. This type of amphibian lizard is widely distributed throughout Europe. He is the smallest of all that can be found in Russia. 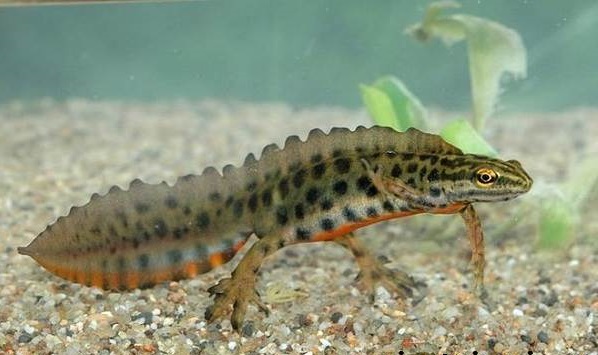 The size of the newt varies between 9-12 cm, and its half is the tail. The body is covered with a pleasant to the touch, a little rough skin. Its color may change during life: lighten or darken.

The very color of the back, often olive-brown, with narrow longitudinal stripes. Males on the body can see large dark spots that are not present in females. The molt occurs in newts every week.

In this lizard, the skin releases a caustic poison. For humans, it does not pose a threat, but once in the body of a warm-blooded animal, it can cause death. It destroys the platelets in the blood, and the heart stops, so the triton-vulgaris protects itself. 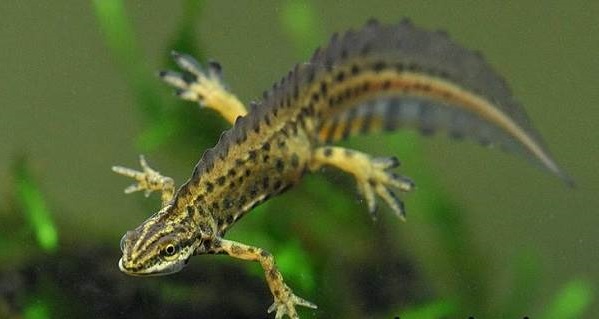 During the breeding season, the males begin to grow a high ridge, edged with orange and blue iridescent stripes. It performs the function of an additional respiratory organ, since it is permeated with many blood vessels. The crest can be seen in the photo of the male common triton.

All four paws in lizards are well developed and all have the same length. There are four fingers on the front and five on the back. Amphibians swim beautifully and run quickly along the bottom of the reservoir, on land they cannot boast of it.

An interesting fact is that triton-vulgaris can recover not only lost limbs, but also internal organs or eyes. Breathing in tritons takes place through the skin and gills, in addition, there is a “fold” on the tail, with which the lizard extracts oxygen from water. 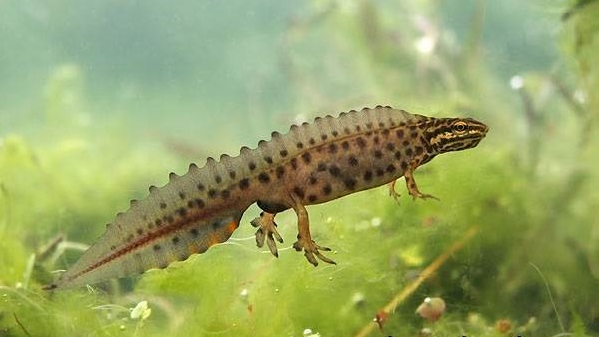 They see very badly, but this is compensated by a well-developed sense of smell. Tritons can feel their prey at a distance of 300 meters. Their teeth diverge at an angle and securely hold the prey.

Common triton lives in Western Europe, in the North Caucasus. You can meet him in the mountains, at an altitude of more than 2000 meters. Although it is more usual for him to live in the woods near the reservoirs. One species of lizards can be seen on the shores of the Black Sea, it is the triton-vulgaris Lanza.

Character and way of life of the newt

The life of a triton lizard can be divided into winter and summer. With the arrival of cold weather, at the end of October, he goes to winter on dry land. As a refuge he chooses heaps from branches and leaves. 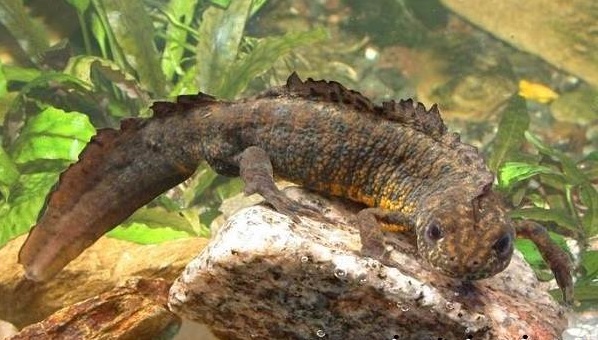 Having found the abandoned hole, with pleasure, it will use it. Often hiding in groups consisting of 30-50 individuals. The selected place is located near the «native» reservoir. At zero temperature, the lizard stops moving and freezes.

With the arrival of spring, already in April, the tritons return to the water, the temperature of which may even be below 10 ° C. They are well adapted to cold and easily tolerate it. Tritons are night lizards, they do not like bright light and do not tolerate heat, avoid open spaces. During the day they can be seen only in the rain. Sometimes they live in small flocks of several.

You can keep an ordinary newt at home. It is not difficult, you need a terrarium, always with a lid so that the lizard could not escape. Otherwise, it will just die. 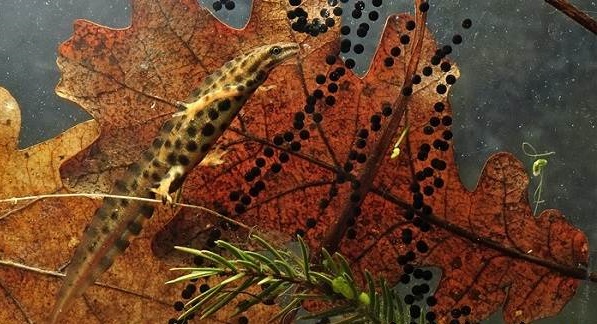 Its volume should be at least 40 liters. There you need to make a water area and a small island of land. It is necessary to change the water weekly and keep the temperature around 20 ° C.

Specially highlight and heat the terrarium is not required. With the cohabitation of two males, fights are possible because of the territory. Therefore, it is recommended to keep them in different containers, or to increase the size of the terrarium several times.

The diet of the newt consists mainly of invertebrate animals . Moreover, being in the water, he eats small crustaceans and insect larvae, coming out on dry land, with pleasure, eats earthworms and slugs. 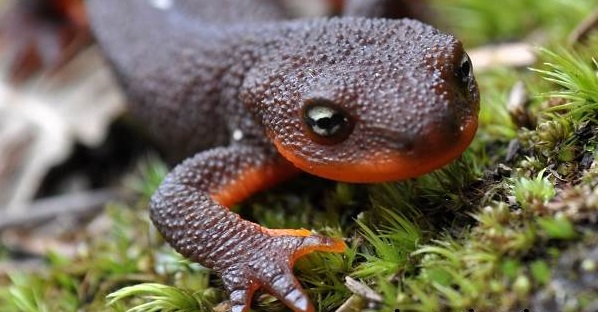 Tadpoles of a toad, an armor mite, spider , butterfly can become its victims . Fish caviar found in water is also used for food. It is interesting that, being in water, newts are more voracious and fill their stomachs more tightly. Domestic lizards are fed by bloodworms, aquarium shrimps and earthworms.

Reproduction and lifespan of the Triton vulgaris

In captivity, newts live for about 28 years, in natural conditions, the duration depends on external factors, but, as a rule, not more than 15. Lizards reach sexual maturity at 2–3 years and are already beginning to participate in peculiar mating games. They last from March to June.

Having returned from wintering, the male triton-vulgaris waits in the pond female. Seeing her, he swims, sniffs and touches her face. Making sure that in front of him is an individual of the opposite sex, he begins to dance. 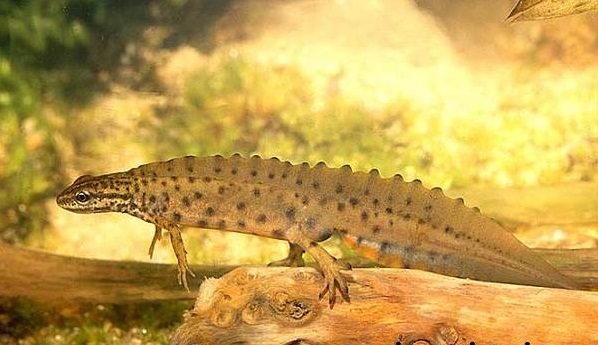 Moving back and forth, he found himself near the female, he stands in a rack on his front paws. After 10 seconds, he makes a jerk, bends the tail strongly and pushes the water jet to the female. Then he begins to beat himself with his tail on the sides and freezes, watching the reaction of the «girlfriend». If the female is delighted with the marriage dance, she leaves, allowing the male to follow him.

Males lay spermatophores on the pitfalls that the female captures with its cloaca. After internal fertilization, they begin to spawn. The number of eggs is large, about 700 pieces. Each of them, individually, the female attaches to the leaflet, while carefully wrapping it with the help of the hind legs. The whole process can take about 3 weeks.

Already after another three weeks, the larvae come out. They are 6 ml long, with a well-developed tail. On the second day, a mouth is cut through, and they begin to catch their prey for themselves. They can use their sense of smell only for 9 days. 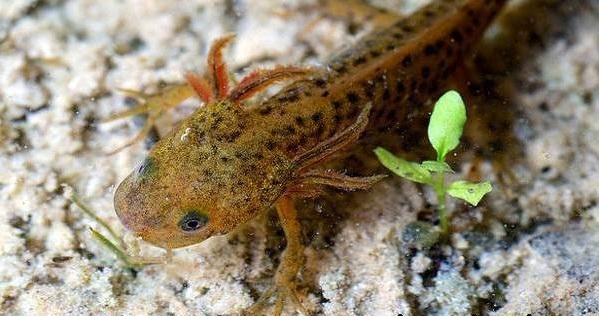 After 2-2.5 months, the grown-up newt can reach the land. If the lizard did not have enough time to develop to the onset of cold weather, then it remains in the water until the next spring. Adults of a newt after a reproduction period switch to a terrestrial mode of life.

Recently, the population of the common triton has sharply decreased, and therefore it was listed in the Red Book . Lizards bring tangible benefits: they eat mosquitoes and their larvae, including malaria. They also have enough natural enemies. These are snakes , birds , fish and frogs that eat young during their maturation in water bodies.