Grasshoppers are grasshoppers. This superfamily detachment of orthopteran insects. He has sub-squads. Grasshoppers are long-haired. In it one family of the same name. It used to be more, but the other long-wolf were extinct. 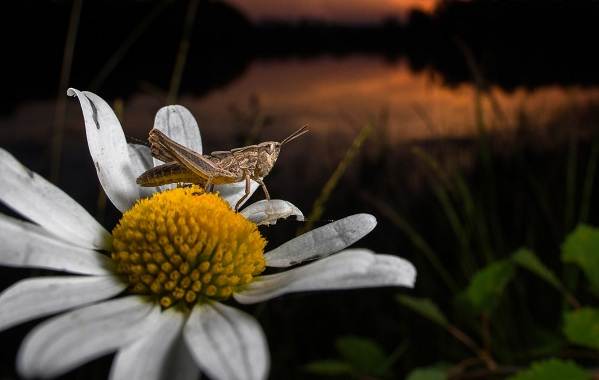 However, the number of grasshoppers closes the «gap». More than 7 thousand species are known. They are divided into genera. Consider examples.

Otherwise they are called fatheads, because they have a fleshy, broad body. The head of insects, as is clear from the name, is spherical. Antennae are planted on it below the eyes. Even sharogolovov shortened elytra. The organs of hearing are located on the fore tibia. There are visible cracks. This is the ears.

This is a medium sized grasshopper. The two-centimeter body of the insect is dense, wide, looks short. Painted grasshopper in brown. The pronotum has yellow markings on the flattened pronotum.

Side keels of Servil expressed. By the way, an insect is named after an entomologist from France. Guy Odin-Serville dedicated his life to the study of orthoptera. 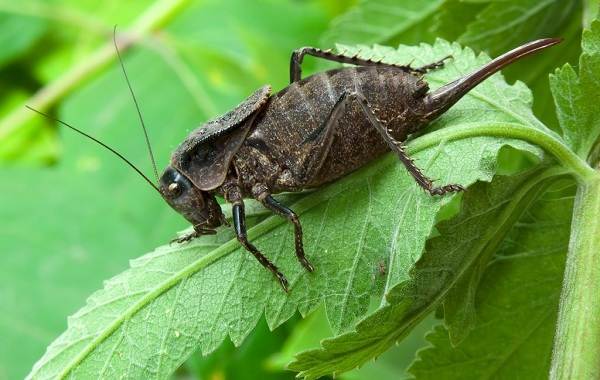 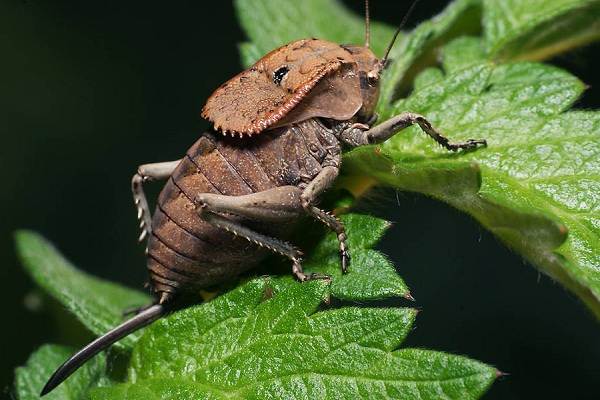 Its name sevchuk servily received in honor of the French entomologist

The European species, on the verge of extinction, is included in the species of large grasshoppers. The males of the species are 8 centimeters. The length of the females is 6 centimeters. 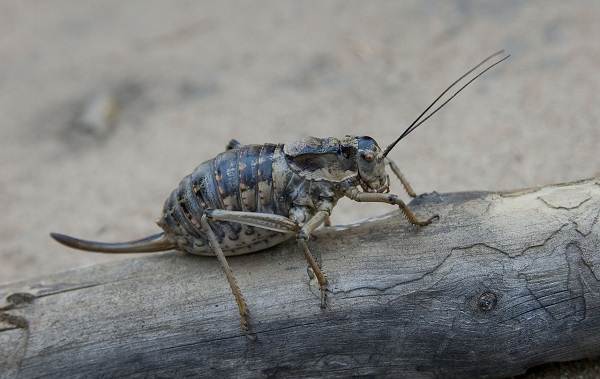 The names of grasshoppers are often due to their appearance. Fatty, for example, looks plump, even fat. Due to this, the visually black-brown body of the insect appears shorter. Volumes are also added by sharp keels on the sides of the grasshopper pronotum.

They are hunchy and stocky. The body of greenhouse grasshoppers is shortened, but the females have a long ovipositor. Representatives of the genus are also long legs and mustache. The latter reach 8 centimeters.

In length a little less than 2 centimeters. The shortened body surrounded by long, thin legs makes the insect look like a spider.

Painted Chinese grasshopper in brown. There are dark spots. They, like the rest of the body, are covered with short, silky hairs. They, together with the chitinous shell, are thrown off by an insect about 10 times in life. For grasshoppers this is a record. 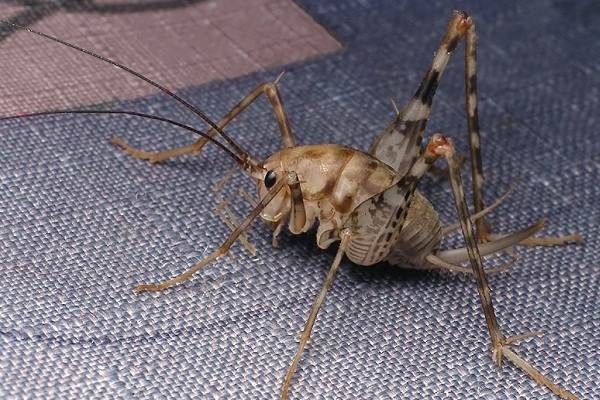 Included in the species of grasshoppers in Russia. Insect is otherwise called cave, because it settles not only in greenhouses, but also karst cavities of rocks.

Far Eastern grasshopper of medium size, brown-gray. Insect is nocturnal. This distinguishes the look of most grasshoppers. 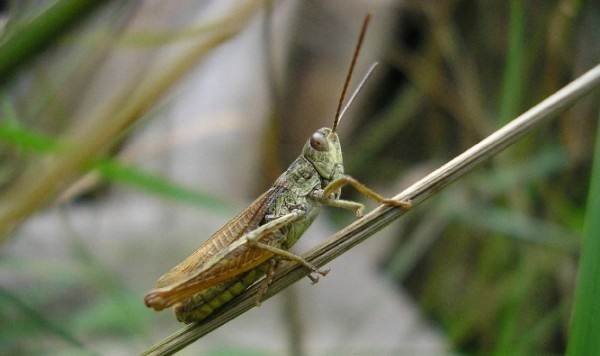 In the genus one species. In Russia, its representatives are the largest grasshoppers. Dyby green, on the sides have light stripes. Stretched body reaches a length of 15 centimeters.

She is a predator. Among the grasshoppers there are herbivores. Predation does not help steppe survive. Species declared endangered.

Steppe dybok no males. Females use partonogenesis. Eggs are laid and developed without fertilization. Other grasshoppers are not capable. 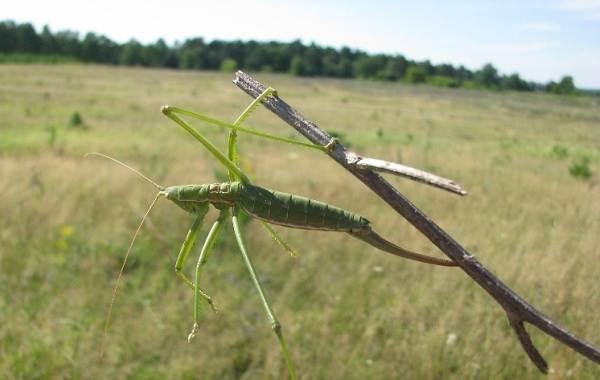 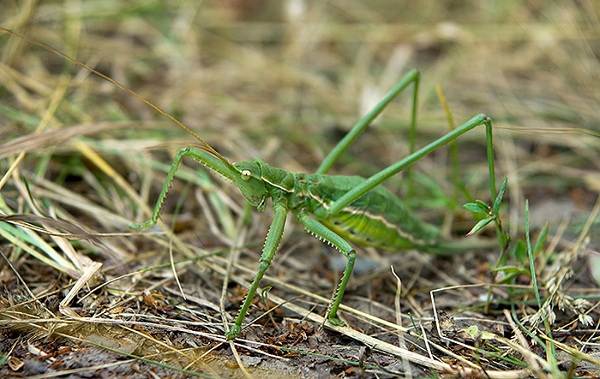 Steppe dybka listed in the Red Book of insects

They have a laterally compressed torso with a spindle-shaped abdomen and slightly compressed from above. Even field grasshoppers, forehead and big-headed, are often devoid of simple eyes and tightly pressed lips. The jaws of insect groups are well developed.

Cannot be larger than 7 centimeters in length. Painted insect in green. Especially juicy color on the wings. Their 2 pairs. This is a feature of all grasshoppers. The first narrow pair of wings they use to protect the body at rest, jump. The upper wings are wide, used for flight.

On the wings of a green grasshopper on the edge can be placed brown. On the face of the insect are large eyes. They are faceted, that is, they are held on the head by a ring of cuticle — a stiff but flexible fabric.

There are subspecies of green grasshoppers. They all hide in the crown of bushes, trees. Therefore, insects do not jump out from under people’s feet. Accordingly, meetings with representatives of the group are rare. 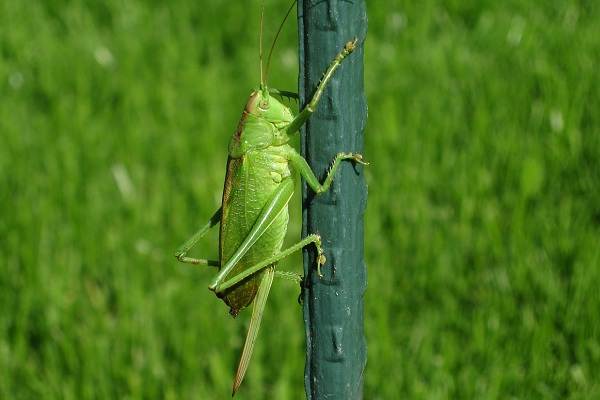 This is a mini copy of a green grasshopper. Singing does not grow more than 3.5 centimeters. 3 more may be in the egg deposit.

The wings of a singing grasshopper end flush with the abdomen. The representatives of the green species wings significantly protrude. 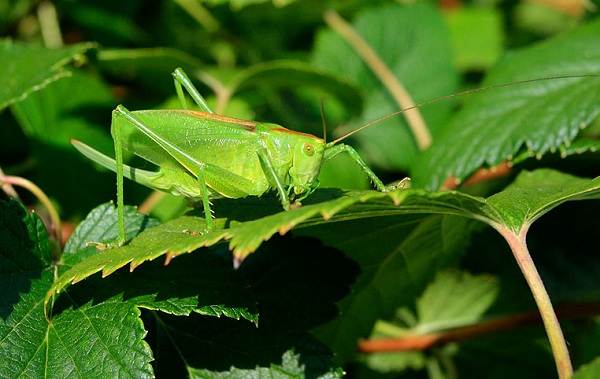 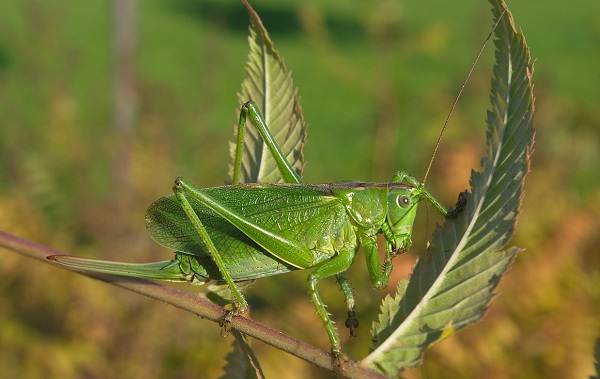 It grows up to 4 centimeters in length. The appearance of the grasshopper corresponds to the name. The abundance of brown spots on a green background makes the insect gray when viewed from a distance. See gray grasshoppers easy. Insects live in the field, steppe grasses, easily enduring the heat.

Due to the prevalence and large size of gray grasshoppers, they are confused with locusts belonging to the suborder of the short-arms. In its name lies the distinction of insects.

The antennae of a gray grasshopper are often longer than its body. Locust mustaches are short. The chaffing mechanism also differs. Locusts make sounds, rubbing their paws together. Grasshopper arching elytra.

Represents the fauna of Europe. Insect length does not exceed 6.3 centimeters. The color of the grasshopper is brown-green.

Long-nosed insect named because of the elongated front of the face. The grasshopper seems to be supplied with a proboscis. 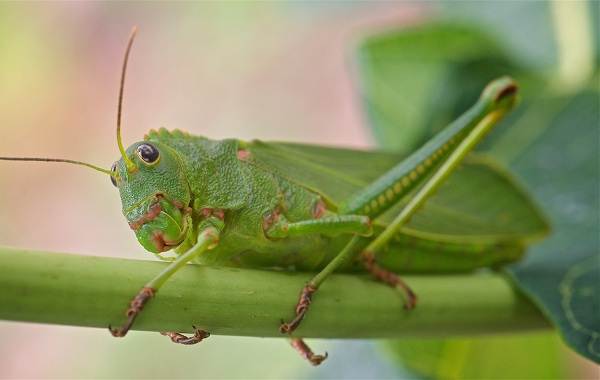 Gray is one of the most common types of grasshoppers.

Grasshopper list
In Latin, it is called Elimaea Poaefolia. Among the field grasshoppers has the longest body. It is narrow and green. This allows you to merge with the blades of grass on which the grasshopper sits.

The grasshopper lives in the Malay Archipelago. 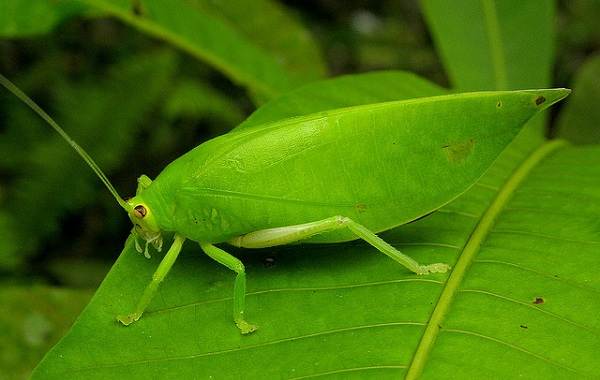 The combination is only found in New Zealand. It weighs about 70 grams, that is 2 times more than a sparrow. The length of a well-fed grasshopper reaches 15 centimeters. The rest of the appearance is not remarkable. The insect is painted in beige-brown tones.

The legs are of medium-sized giant whiteness, the eye is of medium size, and the mustache is of mediocre length compared to the size of the body.

The gigantism of New Zealand grasshoppers is due to the absence of small mammals on the islands. For lack of enemies, the ues almost reached their size. However, in the 20th century, mammals were brought to the fields of Zealand. Because of this, the number of giant grasshoppers is declining. 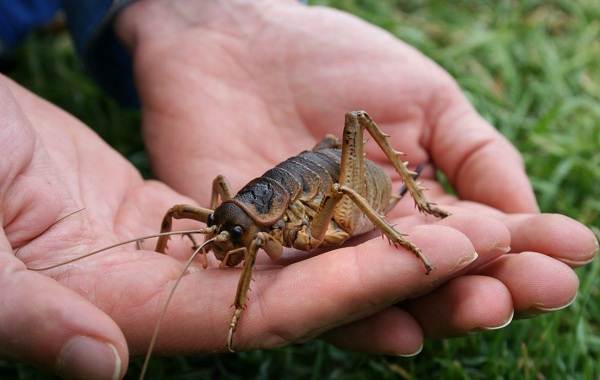 Some grasshoppers are devoid of wings. As a rule, they are inhabitants of fields, stony mounds. Grasshoppers, climbing on the trees, the wings retain. However, there are species with spikes on the legs. Needles, like spurs, dig into the stalks, fixing insects.

Opean varicolor articular antennae powerful, pointed at the ends, straight. Power and rear legs are different. The limbs of the insect, like all grasshoppers, 3 pairs. There is a species in Colombia. 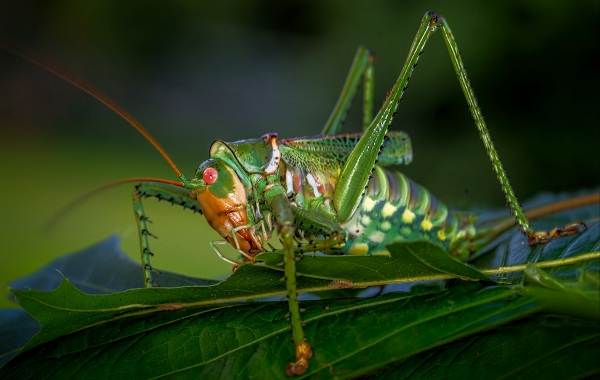 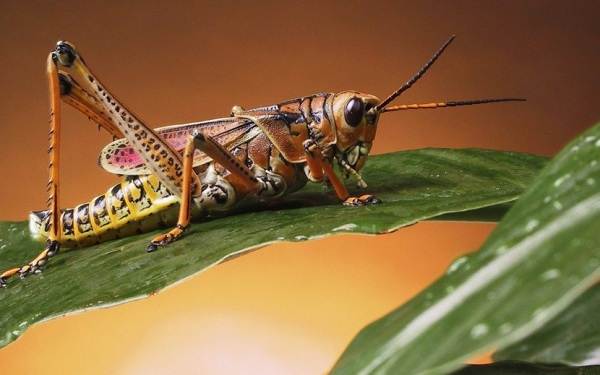 A large representative of the long-strikers, drawn out by 8 centimeters. Almost half of them in females may occur in the egg-deposit.

Mormons are wingless, herbivorous. As a rule, insects lodge among legumes and wormwood. Geographically, Mormons-grasshoppers to the western regions of North America. 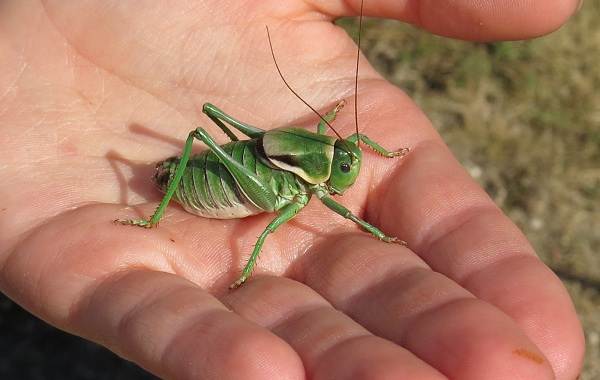 This grasshopper mimics, that is, takes the form of another being. It’s about the ant. Taking its form, macroxifus reduces the number of potential enemies.

Grasshopper in Macroxifus produce long hind legs and elongated antennae. The rest of the insects are similar to large black ants. 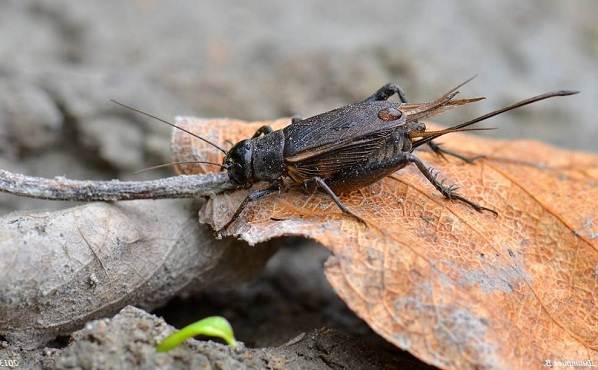 There are types of grasshoppers hardly recognized as such. The case in unusual shapes, colors. Non-standard grasshoppers live in the tropics.

Opened in the 2006th year in the mountains of Guyana. Grasshopper imitates the color of the fallen leaf. Externally, the insect also reminds him. The outer side of the folded wings is dotted with a grid pattern. He repeats the capillary pattern on the dried green.

In order to resemble a fox in shape, the grasshopper folds its wings, closing its sides and solid space above the back. 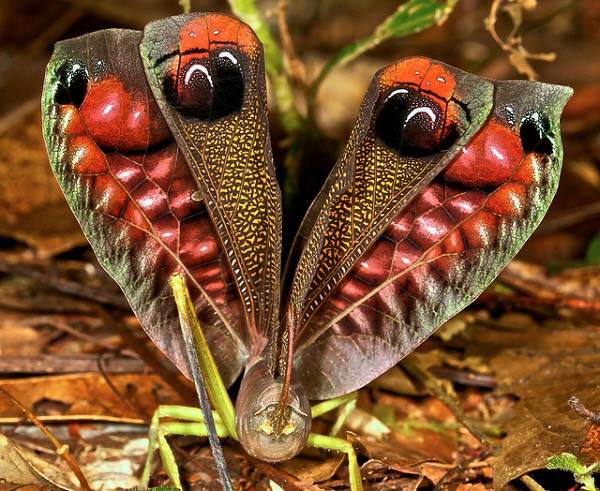 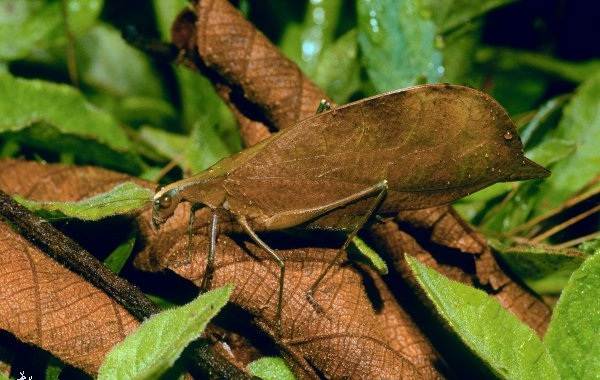 The Peruvian grasshopper opens its wings and looks like a butterfly.

It also resembles a piece, but green. The color is juicy, closer to light green. The antennae of the insect are forest-like threads. They are barely noticeable, translucent, much longer than the body.

The name of the insect is associated with the presence of a horn on its head. It is also green, attached to the back of the head, like a leaflet. 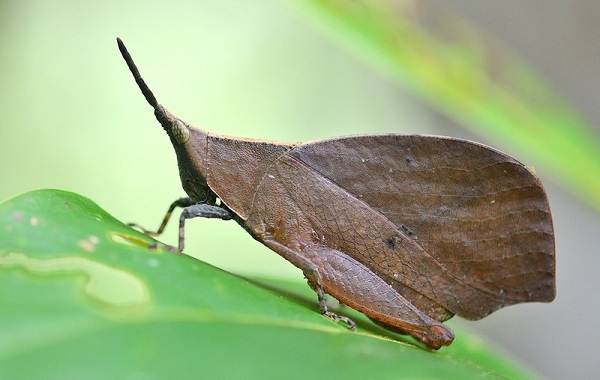 Considering the types of grasshoppers in the photo, it is difficult not to stop looking at the devil. It has an emerald tone and is covered with triangular needles. They are located all over the body.

At length, the devil’s grasshopper does not exceed 7 centimeters, although it is a tropical inhabitant. However, the sharp needles and the manner of the insect swinging the limbs with them in front of the enemies scare them away. The devil does it in the forests of the Amazon. 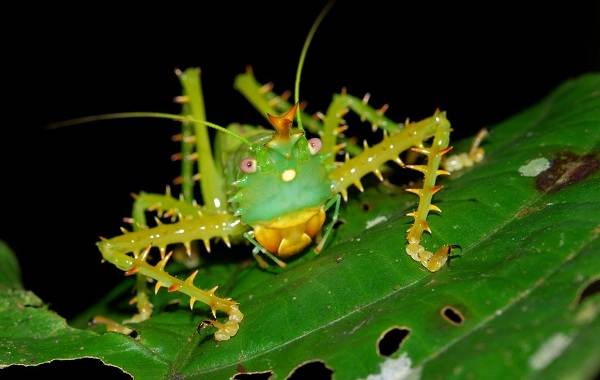 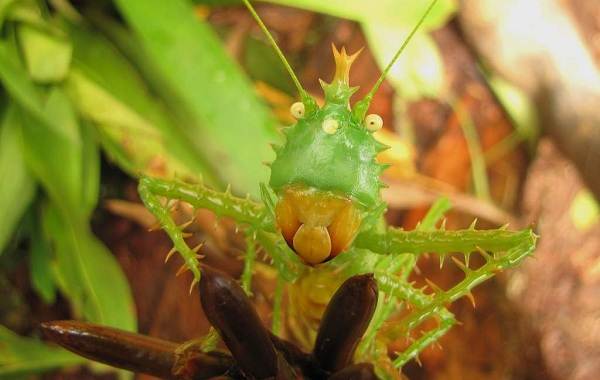 Exotic grasshoppers are found among the ordinary. Here it is no longer a matter of form, but of genetic abnormalities. In the world of grasshoppers erythrism occurs. This is the lack of pigment. Erythritic grasshoppers resemble albinos, but not past ones. Pink color is found in one individual from the 500-from. Erythrism grasshoppers in 1987th year. 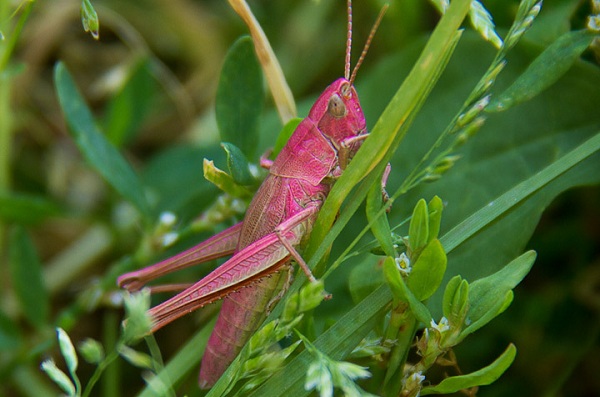 Finally, we note that in the eyes of the inhabitants, grasshoppers are not only true representatives of the suborder, but also crickets, fillys. The latter tendrils are shorter and bodyier. Crickets differ spherical head, as well as flat and short body.

How many cats live