Felinology from the Ukrainian city of Kiev Biryukova Elena people across the globe who love exotic animals have to be thankful for the breed, the Ukrainian Levkoy. Once one wise man had said the right words about the surprise. He said that you can wonder in one second and to create surprise can take a long.

So it was with this breed. Before she was born, it took a long time and needed a lot of works not only of this amazing woman, but all her assistants. 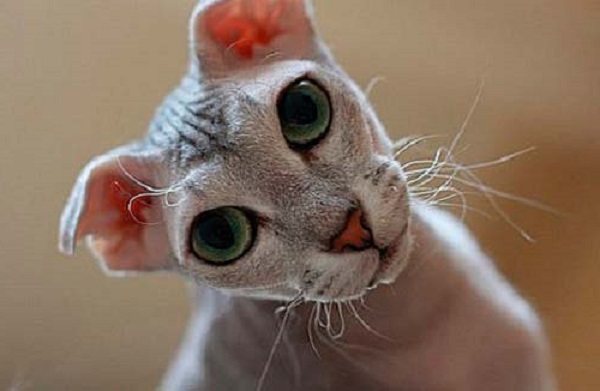 What they have done? Through much trial and attempts they managed to cross two unusual breeds of cats – one with a strange shape of the ears, resembling the flower of gillyflower and another with a complete lack of wool.

In 2000, Helen came to such a Grand idea. The future cat were originally imprinted on the thumbnail images. And in 2004, in the month of January, the world saw its first representative. The extravagance of the cat immediately caught the attention of connoisseurs of the unusual, and she gradually began to appear in every corner of the globe.

The popularity of the breed grew, everyone wanted to have at home such an outlandish creature. In 2007, the city of St. Petersburg after a short deliberation, a special kennel Ukrainian Wallflowers. This place is produced and made real and purebred cats that become favorites of many people around the globe. 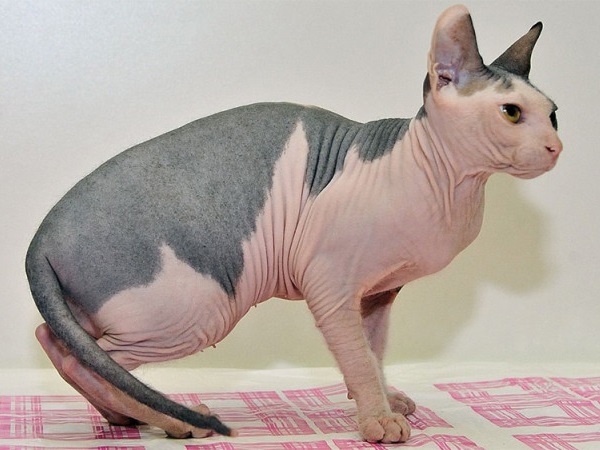 Looking at photos of Ukrainian Wallflowers many suspect that it is an exotic natural wonder came to us from overseas countries, to such an extent unusual to see a hairless cat. The Ukrainian Levkoy cat is named after a delicate, fragile and fragrant flower. In fact, they are fully consistent with this title.

The breed characteristics and the nature of the Ukrainian Wallflowers

Looking at the animal, before the first meeting with a cat, you might think that it has an arrogant character and a complex character, her whole appearance said about it. But after the first Dating opinion changes completely. 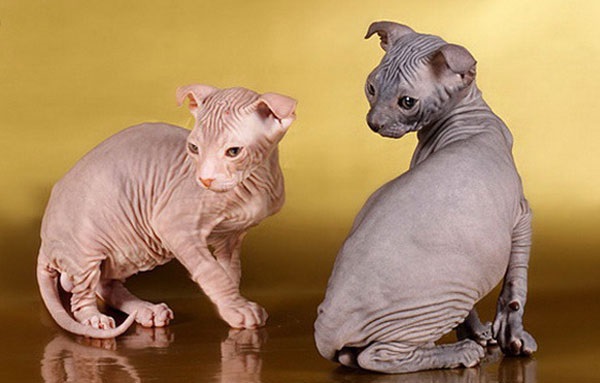 These cats have a soft and fairly flexible character, which fully corresponds to their delicate and velvety skin. The appearance of cats bright, incomparable.

This breed is characterized by a pronounced sexual dimorphism. Males have a large muscular body. Cats differ from cats in their sophistication, smaller size and melodic vocals.

The Ukrainian Wallflowers just a huge number of advantages. They are characterized by many positive traits. People who had close contact with them, say that better companions than Wallflowers hard to find. Fun and excitement are in the blood of these animals. They are clean and loyal.

Mind, intelligence, wit, sociability are the main features characterizing these cats. They easily find common language not only with all the household, but also with Pets. Their activity is manifested with the owners, who are engaged in the education of their favorites. 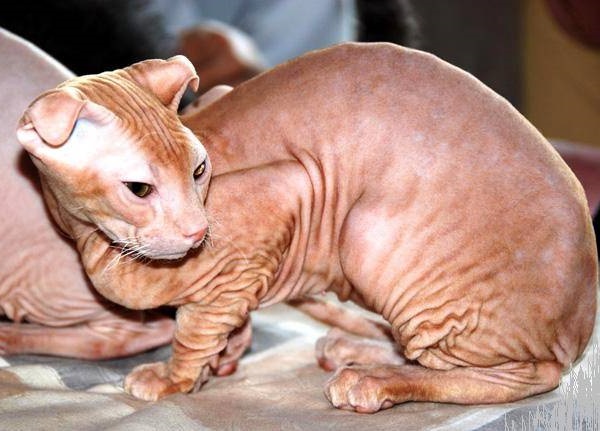 All that is not particularly credible, they ignore. And if you had a chance to get them in some kind of an unpleasant situation, cats manage to get out of it without serious and negative consequences. This helps the intellect with high rates and good education. Reviews from owners of these cats knows that with them there is no hassle, it is absolutely trouble-free cats.

Unlike many other cats, kittens Ukrainian Wallflowers rather quickly accustomed to the pot. They very carefully go to the bathroom, outside are mostly scattered chance of filler. Cats are easily trainable. Not too complicated commands and tricks they memorize and perform with enviable speed. 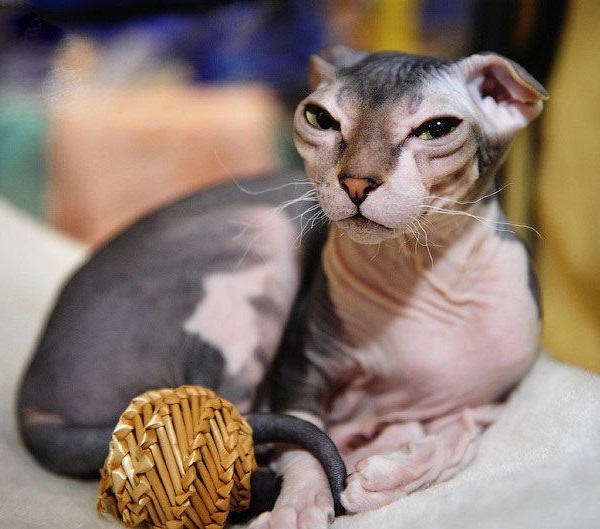 They’re painfully curious. They need to know everything that happens at home. Communication with the household cats play a very important role. And if the Ukrainian Levkoy is still in the process of this communication received from his master the praise, his joy is no limit, it shows that with all of our satisfied.

Cats are for people who lead an active lifestyle. Lazy and irresponsible people should not try to move them, not to torture yourself and the animal. In addition to the sociability and intelligence of Ukrainian Wallflowers charismatic cat. Rarely is something more funny, gentle, affectionate and loyal at the same time.

Their playfulness and activity cats often literally always. Love «chatting» and searching for worthy interlocutors. Cats can suffer from a deficiency of affection. They need to stroke, squeeze and caress words, they love it very much.

Games choose anything you want. Can find in the apartment a ball and a long time to drive it. And can switch to a feather, accidentally caught them. If the owners of the acquire for these animals tweeters or the mazes they are not mistaken. The cats play with it all with great pleasure.

These cats are excellent psychologists. They can quickly capture the mood of its master, and will never show their importunity, if you notice that the host is not in the spirit. In General, the Ukrainian Levkoy is a great friend, which can not only defuse the situation but to lighten the mood. 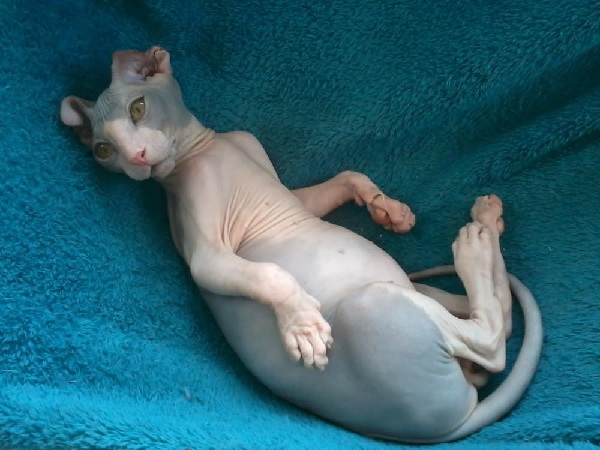 All the other Pets in the family perceived those cats as brothers and sisters, friends. They have no aggressive intentions. In the same room can not get along the only two Wallflowers, but leva with a dog and even a mouse.

The most important thing for your pet the affection and attention of the owners. If they reciprocate. The cat may well make contact with a small child to play with him in high-spirited games and also no problem to spoon with an elderly pensioner.

They need to know that they need that they need all family members, full members where they are. They are the opposite of cats that walk by themselves. They are exactly with respect to all members of the family, but love can say with fanaticism only one his master.

Description of the breed (standard)

Once you look at this cat its just impossible then to forget. She has a truly original and unusual appearance. The Ukrainian Levkoy is impossible to confuse with anyone. Extravagance not only in the naked body. Her floppy ears to draw attention. This breed have their own particular standards, derogation from which is considered marriage.

The head of the Ukrainian Wallflowers has a flat skull with a low set forehead. Cat eyes have the shape of the tonsils, they are not expanded greatly, slightly, we can say narrowed.

Eye color of the animal does not matter. But most often prefers cat with intense blue or green eye color. Puss cats rounded shapes, with a noticeable pronounced eyebrows and cheekbones. Along the ears and chin, you can hold a straight line.

The body of the cat standards is elongated, her skin has many folds. This animal with a well muscled, long and strong limbs. You should pay attention to them. They are not quite like ordinary cats. On the paws clearly distinguished fingers, they are distinguished by their grace and agility.

Tail good length, gradually tapering towards the tip. Mustache this breed either squirm, or short, or altogether absent, as well as wool. Sometimes there are Ukrainian Wallflowers with a light coat isn’t longer than 3 cm. the Color is very different.

problems in the skeletal system;
having not too disclose or not quite developed ever;
cross-eyed or having large, round eyes;
with insufficiently well-developed chin, short nose and round head.
Care and maintenance

Before buying Ukrainian Wallflowers, it is advisable to learn how to care for it. The fact that the cat is missing fur, absolutely does not mean that it does not require skin care. 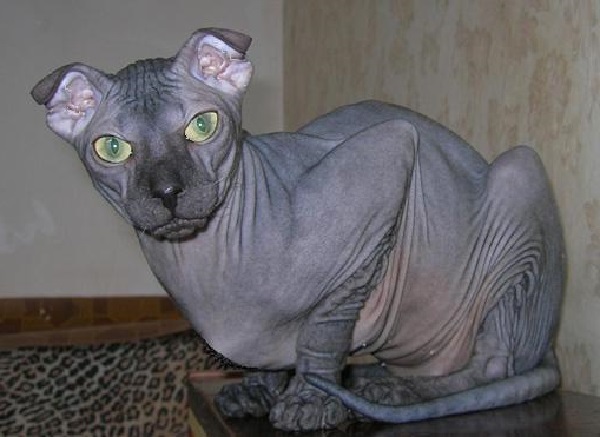 Yes, wyczesany they naturally do not need. But the sebaceous glands of the Ukrainian Wallflowers are so well developed that bathing in special shampoos need a lot more often than normal cats.

In the winter time, you must ensure that beserta the cat does not get too cold and do not fall under drafts. In the summer they should be wary of direct sunlight, they cats can get the real burn.

From too dry air cat hair becomes noticeably dry and flaky. Save us from this special moisturizing lotion. It is solely Pets. A place to sleep Ukrainian Levkoy chooses. Take care on the toilet and the bowl of food and water should a pet owner.

To my pot and eating the cat needs to be available to sleep in warm and comfortable place. The door to the apartment with this cat, it is always better to leave everywhere open, she needs space to run and play.

Quite a large number of negative reviews about this breed, you can hear from people who have seen them only in pictures and never encountered them in real life.

The same people who are fortunate enough at least once in life to stroke this amazing cat, I dream to buy it as long as the dream will not come true. It’s surprisingly neat Pets. They do not have any specific smell, they are hairless in the apartment. 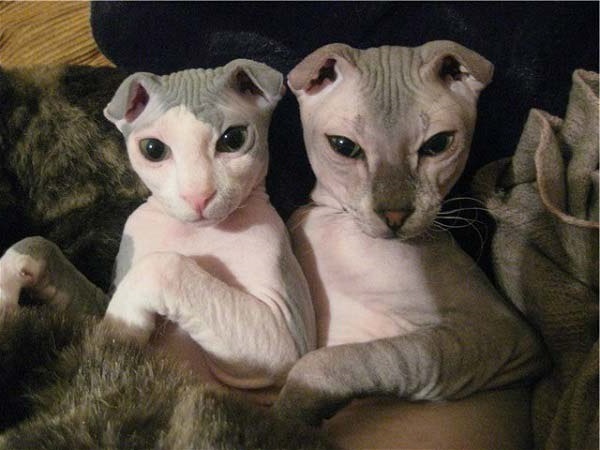 They can make people with a tendency to allergies. In short, Ukrainian Wallflowers – bald cats are picky and not picky. It is important to provide them with attention and do the necessary procedures and periodically visit the vet.

Ukrainian Levkoy appeal to its calm, docile temperament, friendliness, affection and kindness. The accuracy of this pet on a five-point scale is estimated at five points.

They are intelligent, smart, neat, no jealously claims and absolutely friendly to all living things. These qualities manifest themselves in cats at once, they can say, born with them.

The price of the Ukrainian Wallflowers may be different. You can buy a kitten for 25,000 rubles, and it is possible (if very lucky) and for 5000 rubles. Of course, those are grown in special nurseries and have an excellent pedigree are much more expensive.