Vomer — the fish called in Russia by the moon. It is a trademark. However true fish the moon other trade is considered only in Asia, reaches 4,5 meters that at most among bony fishes. 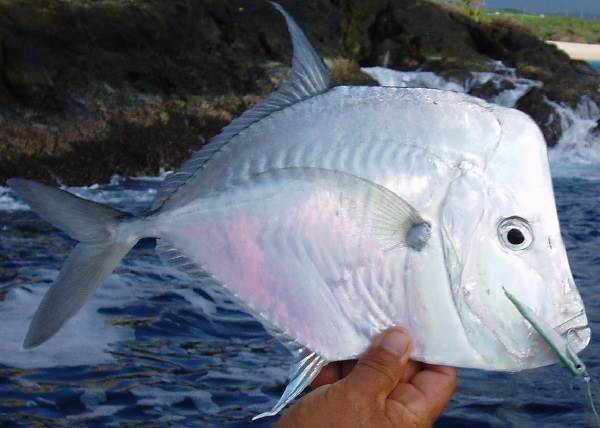 Vomer in length doesn’t exceed 60 centimeters. The confusion is connected with the Greek name of a family of the hero of article — selene that is translated as «moon». A sort — part of family the stavridovykh, and that is ranked as group the okuneobraznykh.

Description and features of a vomer

Are unusual at a vomer and chest fins. They are behind a branchiate cover, settling down above the belly. Outgrowths long, pointed at the ends. Speaking about other features of the hero of article, we will mention that: 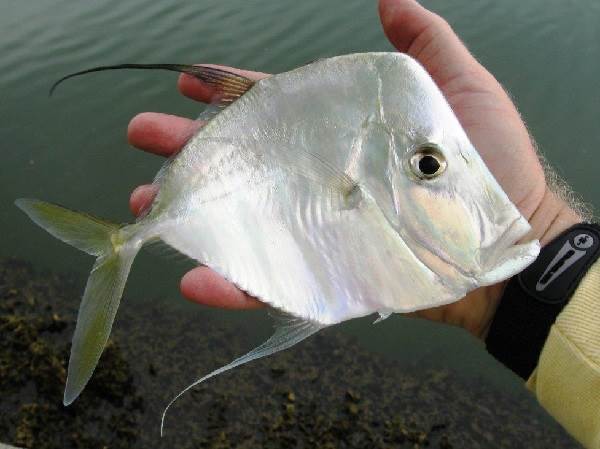 The reduced fins of fish will be transformed during life. At young vomer belly outgrowths are developed. Also by the second back the fin is well looked through. Adult vomer instead of it still have some short needles.

Types of a vomer

For the majority types of the hero of article — it is a vomer smoked, a vomer dried, fried. Fish is trade, it is considered dietary. — it is more than 20% of fat in meat of only 4%, and protein. Partly influences quality of meat where the vomer is found. The most dense and, thus, soft meat at the Pacific fishes. 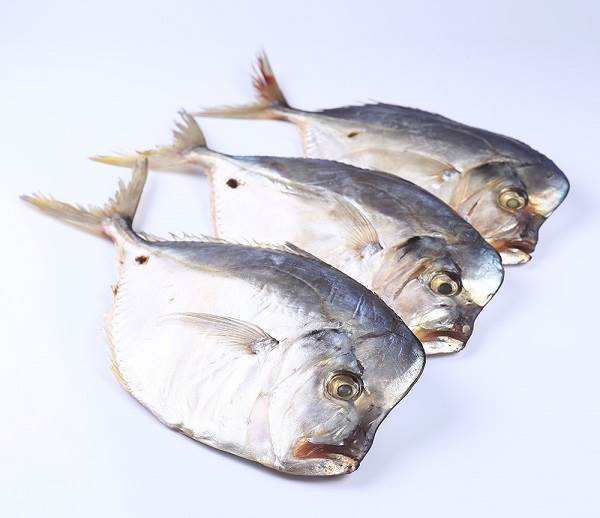 Ichthyologists offer the, not gastronomic classification of vomer. They are divided into the large Atlantic and small Pacific. Treat the last a brevorta, Mexican and Peruvian Selena.

At the last second back the fin is classically reduced with age. The Mexican vomer and a brevorta keep both back fins all life. The first is presented in the form of a long beam.

All Pacific types are deprived of scales. It simplifies preparation of a vomer. It is pleasant to eat the dried, smoked, or baked fish deprived of the plates which are getting stuck in teeth.

Treat the Atlantic vomer African, ordinary and West Atlantic. The last largest in a sort. With a 60-centimeter length of fish 4,5 kilograms weigh. The mass of representatives of an ordinary look doesn’t exceed 2,1 kilograms. The maximum length of fishes makes 48 centimeters. 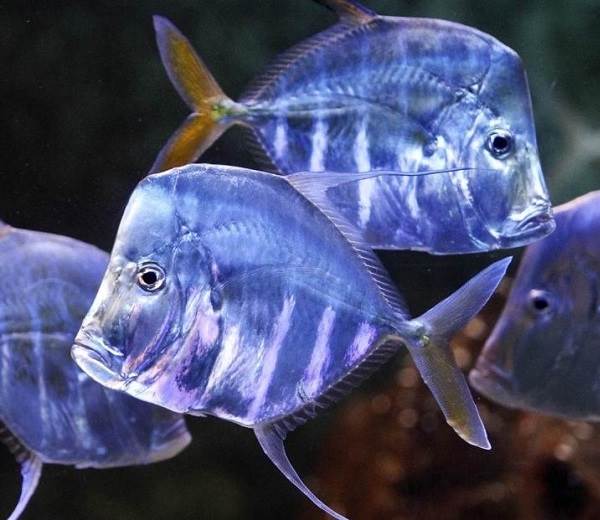 The smallest of Atlantic vomer — African. Its length is equal to 38 centimeters, and the weight of 1,5 kilograms. Smoking of a vomer of a look, as well as other, will transform coloring of fish. From silvery it becomes yellowy-brown.

Features of behavior and habitat of fish

All vomer — gregarious fishes. They keep at a bottom at a depth of 80 — 50 meters, sometimes rising in thickness of water. Geographical habitat depends on a species of fish. The Atlantic individuals are graduated so:

Areas of distribution of the Pacific types are clear from their names. Differing in quality of meat, Pacific vomer are actively caught. It is considered the most valuable the Peruvian look. In Ecuador it was necessary to forbid its catch temporarily. Large copies ceased to come across and the number of packs was reduced.

The young growth of a vomer keeps in desalinated waters at the coast, coming into mouths of the rivers. Adult fishes get off in packs on removal from the coast in couple of hundreds meters. The main thing that the bottom was oozy considerable impurity of sand Is possible. 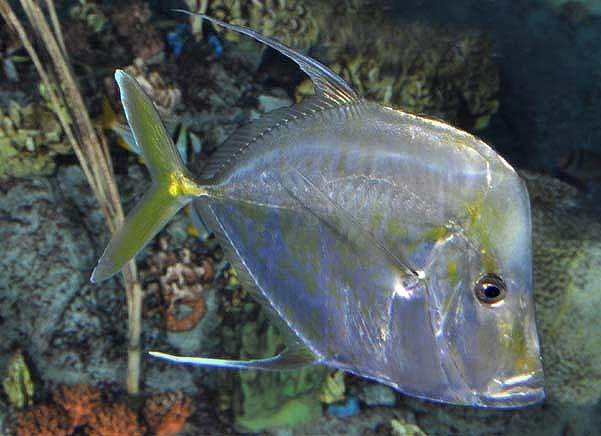 The hero of article — night fish. In the afternoon vomer have a rest in the thickness of water. At night predators get livelihood. In absence of light the luminescence of vomer is clearly visible. They shine, like the moon.

Representatives of scaleless types seem translucent. If to look at fish under a 45-degree corner in front or behind, she is invisible. It is the mechanism of protection against the predators wishing to regale on a vomer.

Offenders often attack under a 45-degree corner. The effect of transparency is caused by existence in skin of the hero of article the nanoskopicheskikh, the extended crystals. They polarize light.

Food of a vomer

Treating family the stavridovykh, a vomer, as well as his other representatives, is a predator. Appetites of the hero of article depend on the sizes. Small vomer base a diet on crustaceans yes shrimps. Fishes devour whitebaits more largely. Sometimes vomer regale on sea worms. Outside salty waters of fish moon don’t meet.

Vomera — viviparous fishes. In other words, animals don’t postpone caviar, and bring ready whitebaits into world. Parents refuse to preserve them. From the first days of life the posterity is provided to itself.

In it there is both an advantage and harm. Fish a vomer is compelled to adapt for realities of the ocean quickly. The strongest survive, with fast reaction. It strengthens population. However its number suffers. 80% of whitebaits of a vomer die in infancy. As an exception aquarian broods serve.

However in bondage vomer breed reluctantly. Unlike fish moon with whom the vomer often shares a name, the hero of article lives at most 10 instead of 100 years. In the wild environment of an individual seldom «cross» a 7-year threshold.

How to prepare a vomer 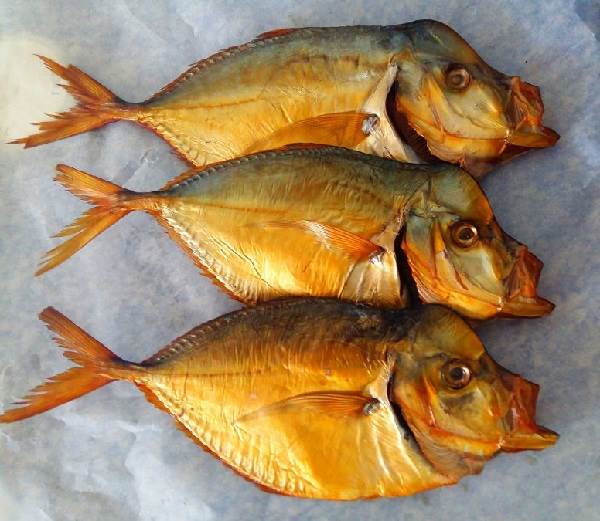 Large fishes are advised to bake in an oven, but the trifle gives all juice there, becoming withdrawal pains and as if rubber. Also recipes of preparation of a vomer on a grill are actual. Further, some dishes for every day:

1. The baked vomer. 6 fishes, on 60 grams of vegetable and creamy oils, salt to taste are necessary. The dish is decorated with fennel and slices of a lemon. Fish is fried previously in olive oil, being drawn and salted. 3 minutes are spent for each party of pieces of meat. Still the 15th fish bake on parchment in an oven.

2. Vomer on a grill. Meat 1,5 kilograms are necessary. In addition undertake 60 milliliters of oil of an olive and a half of a lemon. Salt and pepper add to a dish to taste. Spices rub fish, vzbryzgivy with citrus juice. Oil is necessary for grill lattice greasing. It is necessary to fry fish to readiness. The vomer with stewed vegetables moves. 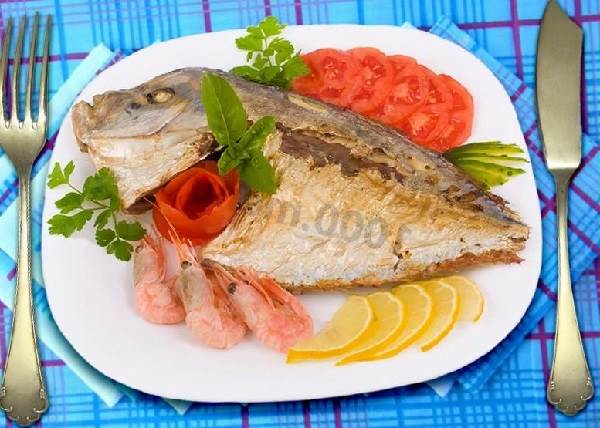 Vomer baked with shrimps, a lemon and vegetables

Liquids pour on 100 milliliters. Torments is necessary 90-that grams. In them throw out slices of fillet and fry on a frying pan. When there is a golden crust, fish shift in a tolstodonny pan.

There place the vegetables fried on the remains of oil and fill in with water. The crushed garlic and spices add to the begun to boil broth. It is cooked by 10 minutes. In the fried and baked look the vomer is good with the garlick swept-away sauce. That the dish remained dietary, dairy product is taken by 5 — 10% of fat content.