The inhabitant of the harsh climate of the Arctic — the walrus has become a household name, because most of the time he spends in icy water getting his food. In order to survive in such difficult conditions this animal must have huge energy resources. 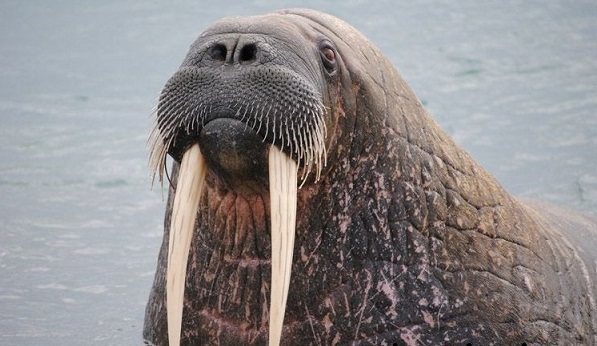 And he has these resources: walruses are marine animals with inspiring dimensions — the length of an adult male can reach 5 meters, and weight up to 1.5 tons, while females are a little smaller — length up to 3 meters, and weight 800 — 900 kg.

Another feature that catches when looking at a photo of a walrus animal, besides its size, is the huge protruding fangs it possesses.

From a small head, relative to the body, two powerful tusks, which can reach 80 cm, protrude downwards; the animals need them not only for defense, often disputes arise between males and clash, but also for getting food from the bottom. Also with their help, the walrus can climb on the ice.

The fat layer of this animal is about 15 cm, and the proportion of fat from the whole body weight reaches 25%. The walrus is a mammal and warm-blooded animal, so when it stays in water for a long time, the blood drains from the surface of the skin and its body becomes light.

Then, when the walrus reaches the surface, the blood rushes back to the upper layer of the skin, and the body acquires the same brownish tint. Juveniles have a small coat, which disappears as they grow older.

Walruses are animals of the Arctic — they live along the entire coast of the Arctic Ocean and on the adjacent islands. Their populations also live in Greenland, on the Svalbard archipelago, in the Red Sea, Iceland.

In summertime, large populations of walruses gather in the Bristol Bay, but the most comfortable conditions for them are in the Sea of ​​Torture in Alaska, but since walruses are migratory animals, they can also be found on the northern coast of eastern Siberia. 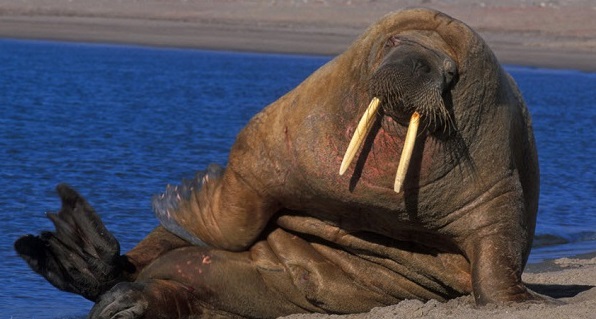 The nature and lifestyle of the walrus

A walrus animal is not inherently aggressive; they congregate in groups of 20-30 individuals, and only during the breeding season in the pack do the largest males manifest themselves, which take the dominant role.

On the rookeries, which can hold northern animals walruses, several thousand individuals gather. Being on vacation females care for babies, males find out the relationship.

Those animals that are on the edges of the rookery serve as a sentinel, having noticed from a distance any threat they loudly notify their fellows about the impending danger. Hearing the alarm, the whole herd rushes into the water, when the crush is severe, the young can suffer, so the females cover them with their body

Listen to the walrus voice

One of the ways to feed a polar bear is walrus, a seal and other inhabitants of the north. A bear hunt for walruses in rare cases, as it cannot cope with it in the water, and on land its prey becomes weakened animals or young that died during the crush 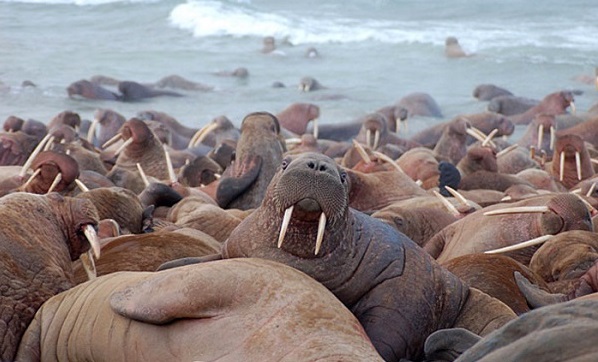 In the photo a colony of walruses

he bear will not be able to resist an adult healthy individual, for it there is easier prey among the seals, the seals. In water, killer whales are the only opponents of walruses, they are larger than walruses and have sharp teeth. Fleeing from the killer whales, walruses have to get out onto dry land.

Since the walrus lives in coastal waters, there he finds food for himself, he swims to a depth of 50 m., As much as he can sink to 80 m. Most of his diet consists of mollusks, crustaceans and worms.

With his huge fangs he plows his beard on the bottom, thereby raising the shells of mollusks, then with flippers rubs them, separating the shells from the “filling”, the fragments of shells are heavier and sink to the bottom

In order to get enough of a walrus, you need 50 kg of mollusks a day, he does not like fish, and he resorts to it when there is no other food. The largest males can hunt seals, seals, narwhals — they are considered dangerous predators and can attack humans. Having tried the meat, the walrus will continue to search for it, the northern peoples call such people — Kelyuchams.

The reproduction of walrus animals of the Red Book of Russia does not occur often, the age of puberty comes to 6 years. Mating takes place from April to May, at which time males fight for females.

The female often gives birth to one calf, at least two, it can occur every 4 years. Pregnancy lasts up to 360 days, a newborn weighs 30 kg and lasts for 1 year with mother’s milk. 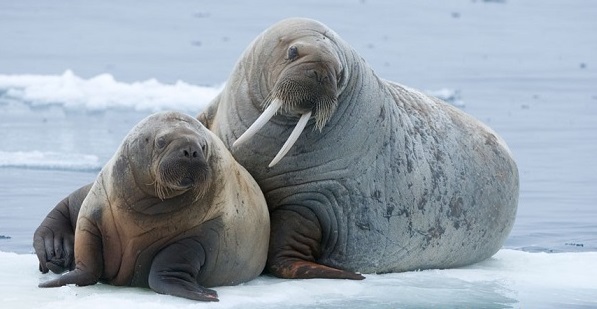 The female protects the offspring up to 3 years, until their fangs begin to grow, with which they themselves can get food. At the age of 2 years, he can already eat various foods, but he also continues to drink his mother’s milk. The life of animals in the Arctic walrus is 30 years, of which 20 years they grow. The maximum age is 35 years.

The population of all walruses on the planet is only 250 thousand, and the Laptenev species listed in the Red Book contains only 20 thousand individuals. This situation has become possible due to commercial hunting.

Basically, they were hunted from their canines, from which handles and various handicrafts were made. Local peoples used hides and meat. At present, commercial hunting and commercial fishing are prohibited all over the world; only those old-fashioned people for whom it constitutes a way of life are allowed to fish. 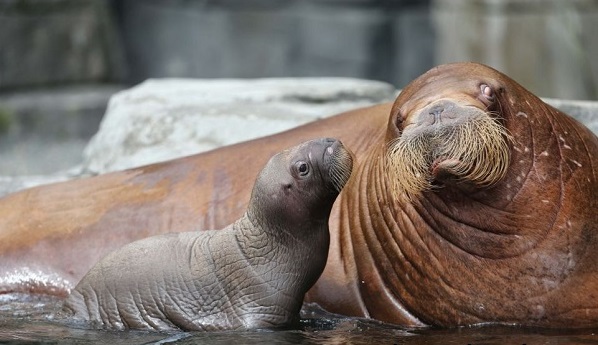 In the photo the walrus with the cub

These include the Chukchi, Eskimos, and others, they eat walrus meat, fat is used for lighting, fangs for handicrafts as part of folklore. Global climate change also had an impact on the walrus population, due to warming, the thickness of the pack ice decreased, where walruses make their rookeries.

Pack ice is desalinated drifting ice that has spent a two-year defrost freezing cycle. As a result of the melting of these ices, the distance between the “rest area” and the place where they got food was increased, so the young have to wait longer for their mothers, which later reduces their reproductive function.

This is confirmed — on the coast near San Francisco, walrus remains were found, their age is almost 30 thousand years, this indicates that they were previously distributed to the south.