The world of the nature is rich both regularities, and riddles. The simple inhabitant who forgot a school course of geography and zoology, a playful question: why polar bears don’t eat penguins — can nonplus. The predator can’t catch production? Tasteless birds? 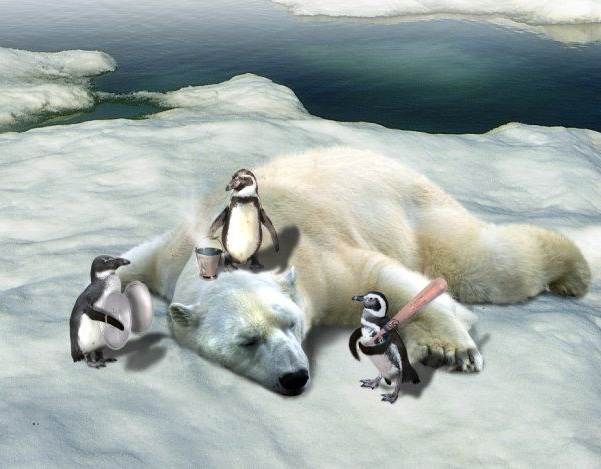 The young fans of animals who are brought up on animation characters and rollers on the Internet where heroes in images of animals sing dance, play, fondly assume that bears don’t eat penguins as they are friends. Unless it is possible to eat the friend?

It would seem, a lot of things are known of famous inhabitants of severe climatic zones. The riddle why polar bears don’t eat penguins, is remarkable that it is possible to remember features of character and habitat of each animal. They deserve that.

Sea (polar) bear — one of the largest representatives of mammals on the planet conceding the sizes only to an elephant among overland inhabitants and to a whale in the underwater world. Length of a predator about 3 meters, height about 130-150 cm, weight reaches 1 ton. 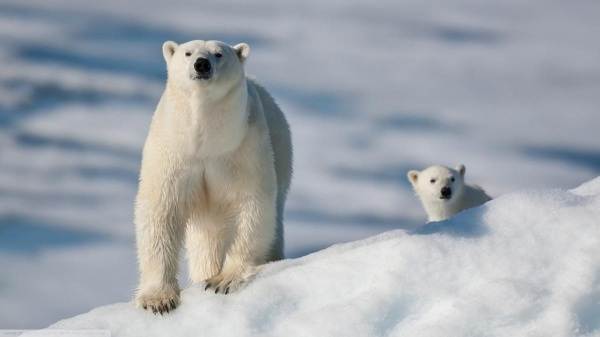 Not for everything the interesting detail is known — leather of a polar bear is painted in black color. It helps to be warmed with sunshine on a bitter cold. The fur coat is deprived of a pigment, sometimes turns yellow from dazzling light.

Structure of hairs of wool such is that they pass only ultraviolet rays, thereby providing heat-insulating qualities of fur. It is interesting that the bear can become green in a zoo during a heat – in woolen hairs there are microscopic seaweed. The polar bear lives in subpolar areas, zones of the Arctic deserts, tundra areas only of the northern hemisphere of Earth. 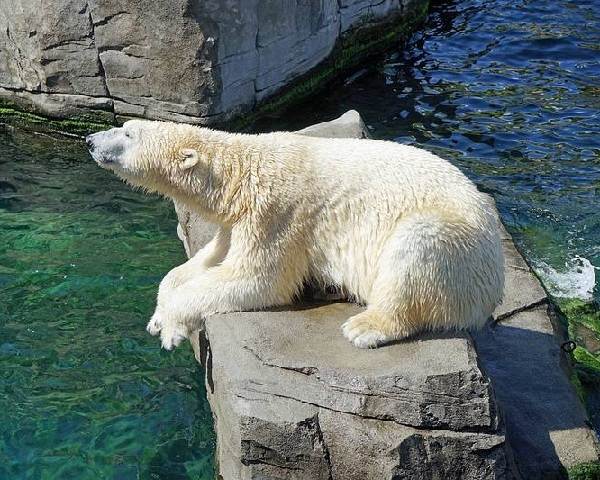 Annulate seals, walruses, seals, sea hares and other animals fall prey of a mighty predator. The bear hunts everywhere: on snow plains, in water, on the drifting sea ices. Dexterity, force and skill allow even to catch fish though it doesn’t prevail in its diet.

In food happens selective: prefers skin and fat at large animals, the rest — on a pro-forage to birds and animals deathbirds. Regales on berries, a moss, eggs and baby birds from nests.

It is difficult to bear to find «delicacies» in the changed climatic conditions, then in a diet there are overland animals — deer, geese, lemmings. Warehouses and garbage cans too attract bears when they are very hungry. 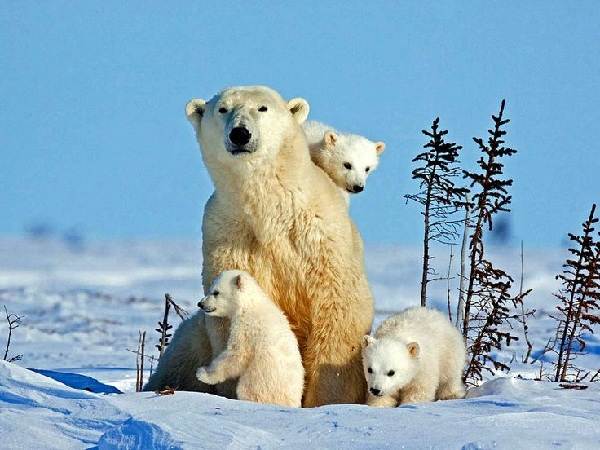 Seasonal movements depend on borders of polar ices – in the winter predators come on the continent, and recede to a pole in the summer. In the Arctic rescues a grease layer under skin from hard frosts and ice winds of a bear, which thickness of 10-12 cm. Polar ices and snowdrifts for them – native elements, despite average temperature in minus of 34 °C.

Quite often school students and adults, confuse these geographical concepts. It is remarkable that the name Arctic, in a literal translation with Greek, «she-bear» means. The secret consists in a territory arrangement under constellations of the Big and Small Dipper, the main reference points of a northern Pole star. The Arctic unites the coast of the Arctic Ocean with islands, part of Asia, America, Europe. The bear country is approached to the North Pole.

Antarctic in a literal translation means «opposite to the Arctic». It is the huge territory of the southern polar region including the continent Antarctica, coastal zones with islands of three oceans: Silent, Atlantic, Indian. Climatic conditions in the Antarctic latitudes the surovy. Average temperature makes minus of 49 °C. 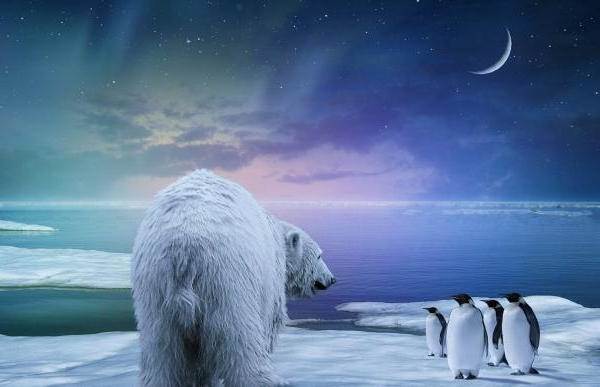 If to assume that polar bears would move on other pole of the planet, their destiny would be unenviable. To survive in the lowest temperatures where favourite hunting of polar bears at an ice-hole is excluded, it is almost impossible. Ice thickness in Antarctic – hundreds of meters, in the Arctic – all about a meter.

The fauna of the South Pole isn’t adapted for the neighbourhood with a large predator. Many types would undergo elimination. Among the first with such fate there would be penguins occupying the Antarctic latitudes.

A variety of fauna on the South Pole is richer, than on northern latitudes. Here the ban on hunting, fishing and any economic activity is imposed. It is interesting that Antarctic doesn’t belong to any state, unlike the Arctic divided between Norway, Denmark, the USA, Canada and Russia. It is possible to consider that the South Pole is «kingdom» of penguins which variety is presented fully.

Habitat of not flying birds – the coast of Antarctica, the territory of the extreme South of Earth, with large ice floes, islands. Lovely creatures of the nature perfectly float, sight under water becomes more sharply, than on the land, and wings as if turn into flippers. 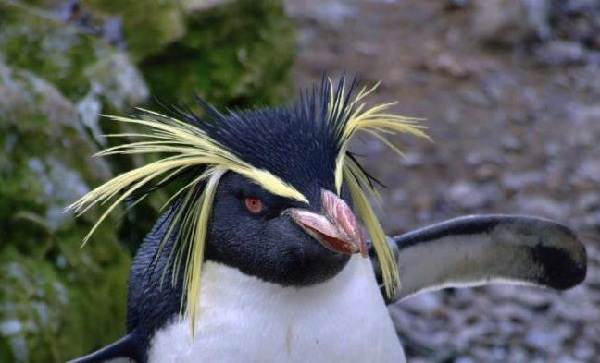 During a heat they rotate, as if screws, thanks to shoulder joints. Speed of swimmers makes about 10 km/h. Immersions under water in some honeycombs of meters last till 18 minutes. They are capable to jump out over a surface like dolphins. This ability sometimes saves them life.

On the land penguins go waddlingly, dexterously move on a paunch after pushing away by wings and feet – slide on ice floes. Three layers of waterproof peryshk and air layer between them protect from cold of birds. Besides, the fatty layer in 3 cm, too serves as protection against frosts. 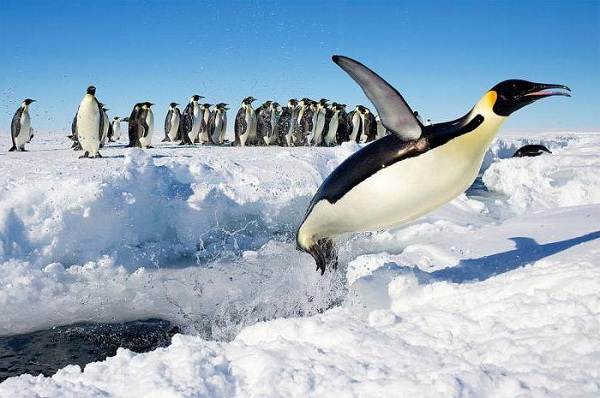 In a diet of penguins fish prevails: sardine, anchovies, jack mackerel. The need for the necessary quantity of food forces them to dive constantly under water. During the day heats on hunting happen from 300 to 900 times.

Birds have enough enemies both in sea depths, and on a surface of eternal ices. If under water penguins escape even from sharks, on the land it is difficult to them to escape from foxes, jackals, hyenas, other predators.

Many predators dream to regale on pingvinchik, but polar bears in the list aren’t present. They simply won’t manage to make it. Animals are divided by huge distance between different hemispheres of Earth – that is why the polar bear doesn’t eat penguins. 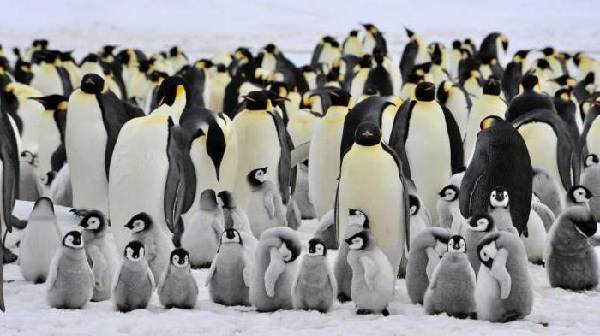 Habitat doesn’t push together birds with the mighty lords of snow deserts. They can look at each other only in a zoo, but not in wildlife.

That divides and pulls together bears and penguins

Eternal ices, icebergs, snow, severe frosts of polar places unite in consciousness of people of those surprising animals who are capable to live in this wonderful and severe world. Surprises nobody when in animated films, in drawings in children’s books represent together polar bears and penguins among snow-covered plains. They keep heat and energy of life in silent and boundless places.

Nobody knows how there would be their relations, it appear they in one territory. But still polar bears reign only in the northern hemisphere, and penguins respectively only in the southern. As it is fine that polar bears don’t eat penguins!