Wolverine is an animal. Lifestyle and Wolverine habitat

Wolverine is an animal that people have endowed with mythical properties and have laid many legends about it. North American Indians and «forest people» of the Yenisei taiga consider this beast sacred, show respect and do not prey on it. 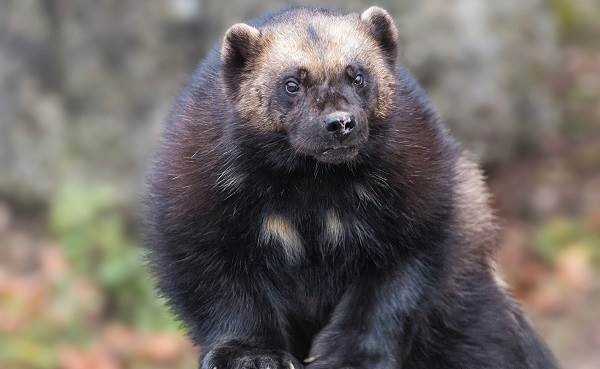 And the Saami, the people inhabiting the Kola Peninsula, personify a wolverine with demonic forces. In Chukotka called the beast of the Yeti, because it appears unknown from where and leaves in an unknown direction.

Wolverine belongs to the family of cunts and resembles both a sable and a small bear. Indigenous peoples of Scandinavia believed that the bears some babies remain small and it is wolverines.

Some similarity of this beast can be seen with martens, badgers, skunks, ferrets, but the wolverine is a separate kind of animal. Giant otters and sea otters are larger than the wolverine, but are semi-aquatic representatives of this and the family, so that the palm tree can be given with confidence to this animal. 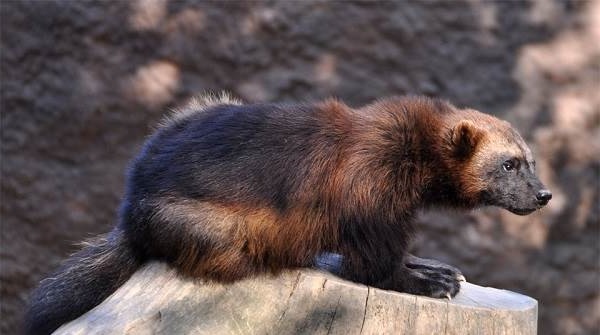 Male and female gluttons practically do not differ from each other. The length of the animal can reach 1 meter. The tail is up to 20 cm. On the small head there are small rounded ears practically devoid of wool. The growth of wolverine is up to 50 cm, the trunk is short.

Paws are long and wide, which creates a sense of disproportion. The membranes on the limbs and their structure allows the animal to make its way unhindered through deep snow, where the road of the lynx, fox, wolf and other animals is closed. Moving the animal awkwardly, but has incredible dexterity. 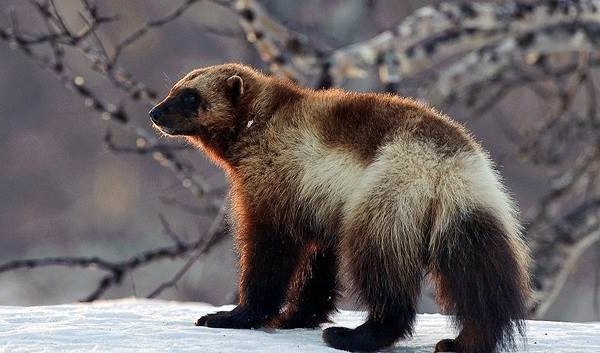 The peoples of Scandinavia believed that some cubs do not grow up and remain kids for the rest of their lives, they are wolverines

The chest cell is different in every individual and unique as a person’s fingerprints. The huge claws on the paws allow the predator to perfectly climb trees and even go down with them upside down, although the animal prefers to lead a terrestrial way of life. Also this beast perfectly swims.

Powerful jaws and sharp teeth give the animal the opportunity to quickly deal with his opponent and gnaw his large bones. When hunting for production, the wolverine can develop a speed of up to 50 km per hour and a long time to run without stopping. This animal is considered to be the strongest in its weight category. And indeed, with a weight of about 13 kg, a wolverine can protect itself from grizzlies or a pack of wolves. 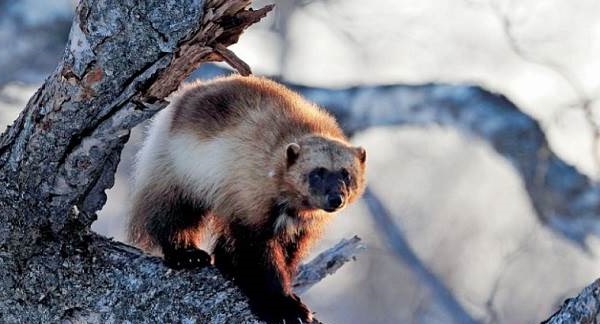 Thick, coarse and long brown fur covers the body of a predator in winter, in the summer it becomes shorter. On the sides there are bands that can be white, gray or yellow. The thermal insulation of the «coat» is so great that it does not let the snow melt under it. 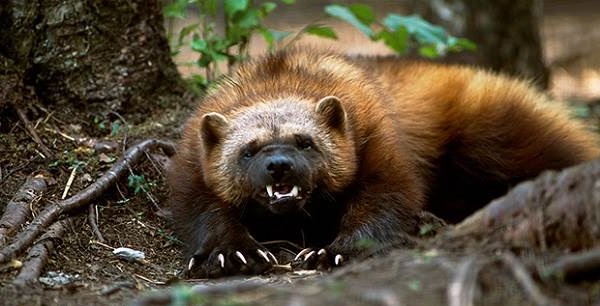 Wolverine habitat is the lowland and lowland taiga in the northern forests and forest-tundra of Asia, North America and Europe. However, the animal does not like strong frosts and prefers to live where the deep snow lies for a long time on the surface of the earth, since it allows not to fall into it, which facilitates the hunt. In some countries, the animal is protected and hunting is limited.

Wolverine’s character and way of life

About Wolverine, information is difficult to gather, because it leads a rather hidden way of life and is the most unexplored predator in the world. This beast is very difficult to photograph, and just to see. The animal prefers a solitary life. In one territory, several individuals are very rare. 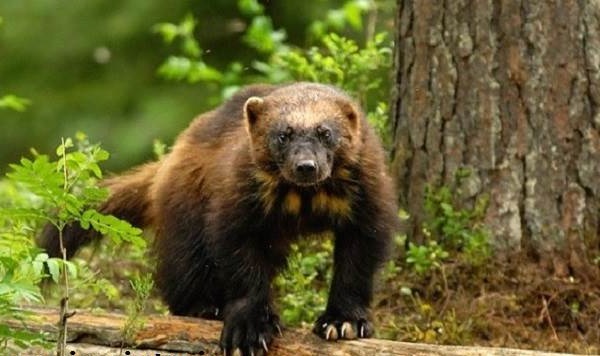 The controlled territory of one male, which he will necessarily mark, can be up to several thousand kilometers. On its site, the beast moves in search of food and from time to time bypasses all of its possessions. In a few months the animal can overcome more than one hundred kilometers.

It stops in those places where there are a greater number of artiodactyls. In hungry times, wolverines can be found far from their range. The animal builds its dwelling under the roots of trees, in gorges of rocks and other secluded places. In search of food comes out in the evening. 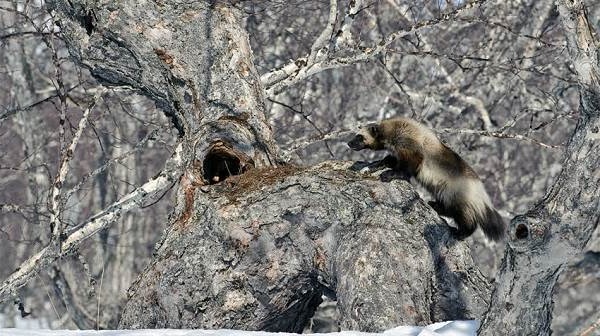 Wolverine is an excellent way to climb trees

A brave and impudent beast does not lose its dignity even before the superior force of the enemy, including the bear. When you scare away your competitors for the production of food, begin to rattle or grow hoarsely. Kindred among themselves communicate with sounds resembling barking foxes, only rougher.

Careful Wolverine almost always avoids the attack of a wolf, a lynx or a bear. More enemies this beast does not have. The greatest danger is the famine, from which a large number of individuals die. 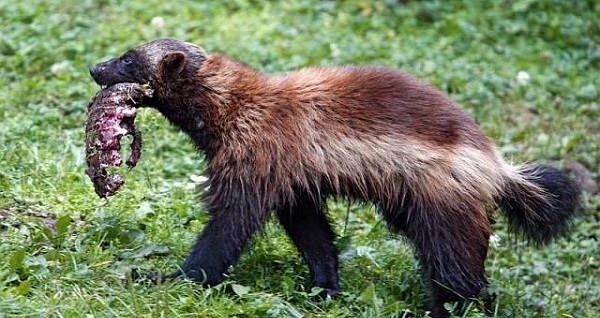 Wolverine is not afraid of man, but prefers to avoid it. As soon as economic activity begins on the property of the animal, it changes its habitat. There are cases of predator attacks on people. Residents of the tundra warn of the danger to a person who has fallen into the world of wolverines and warns that you can not stop, otherwise you can become his food.

The young wolverines are easily tamed, they are not aggressive and become literally tame. However, in the circus and the zoo these animals can be seen very rarely, since they can not get along in places where there are a lot of people.

Wolverine is certainly a predator and it can travel for many tens of kilometers in search of meat. However, in the summer it can eat berries, roots, some plants, insects, snakes and eggs of birds. 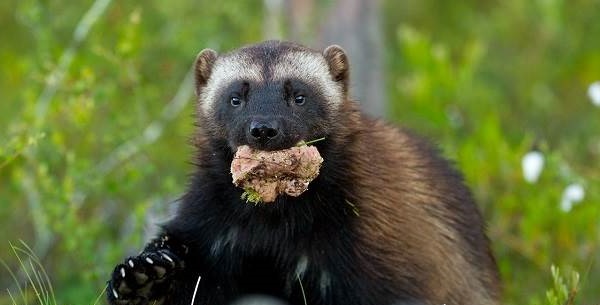 Being an excellent hunter, a wolverine in a secluded place arranges an ambush and watches the victim. The attack of the wolverine animal is of a sudden nature, and the attacker exerts all his strength in the struggle for sustenance, the victim is torn by sharp claws and teeth.

If the extraction manages to escape, the predator begins to pursue it. Wolverine does not run very fast, but it has great endurance and simply «exhausts» another animal.

On its territory, the beast is mainly located near the grazing ungulates and from time to time moves from one herd to another or follows them. It is very rare to watch wolverines hunt in groups. 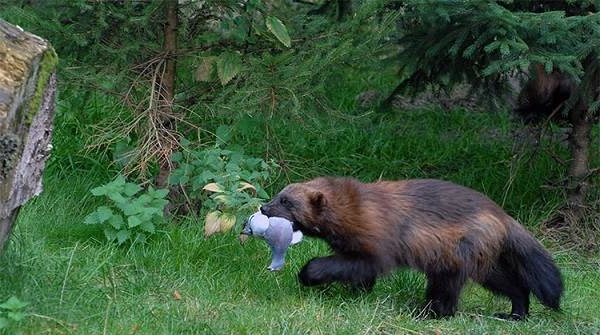 Wolverine eats the carrion most of all predators

If possible, the food is taken from another predator: lynx or fox. Wolverine’s amazing flair allows her to find and dig out dead fish from under a thick layer of snow and feel the blood of a wounded animal at great distances.

It is considered that the wolf is the chief sanitary officer of the forest, however, this opinion is erroneous. Wolverine kills more carrion than other forest dwellers. It eats animals that have fallen into the trap, corpses and food remains of larger predators. 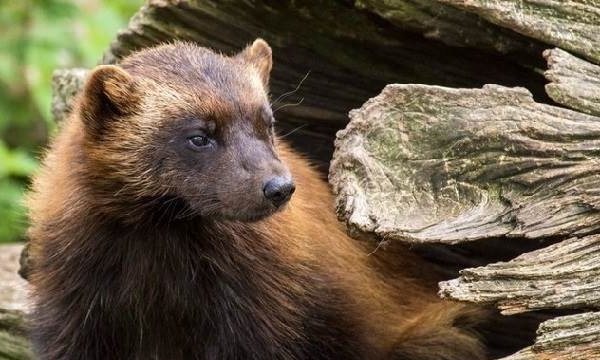 At one time a predator can eat a large amount of meat, but will not forget to make a reserve. Buried under snow or hidden in a secluded place food will help survive in difficult times.

Their wolverine territoriality is not very strict, but this rule does not apply to the mating season. During mating, animals carefully mark the boundaries of their possession and can only share them with females.

In males, the breeding season occurs once a year, in females — once in two years and lasts from the middle of spring to the beginning of summer, sometimes longer. Cubs appear at the end of winter, early spring, regardless of the time of conception. 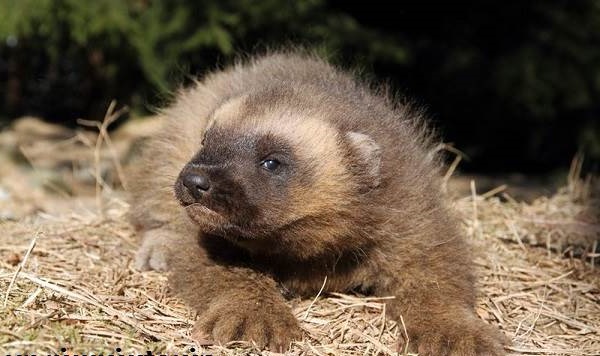 On the photo there is a small wolverine

The thing is that the egg can be in the female body and not develop until the favorable conditions for the development and birth of the fetus. Immediate intrauterine development of Wolverine lasts a month and a half.

Completely helpless, blind, with a small gray hair, weighing 100g in wolves, 3-4 puppies are born in lairs or specially dug underground tunnels. They begin to see in a month. 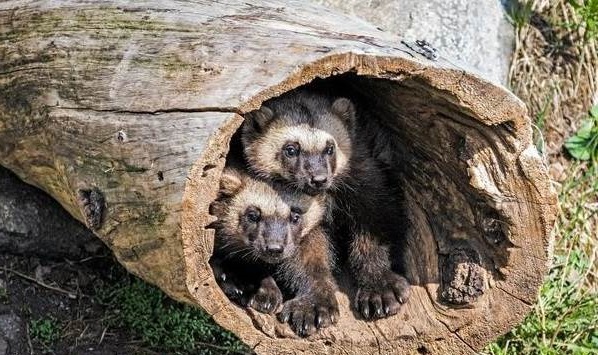 For several months they eat mother’s milk, then half-digested meat and only after six months they begin to learn how to hunt independently. Mother with her offspring is also in the period of the next winter. At this time, lessons are being taken on the production of large ungulate animals.

In the spring, babies grow up and part with their mother, some leave after reaching the age of two when puberty is reached. Male and female Wolverine spend together only the period of fertilization, which lasts several weeks. 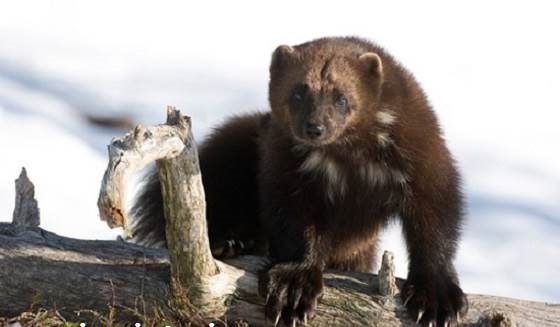 The structure of the chest wolverine is unique, like fingerprints in humans

However, the daddy does not forget about the kids and from time to time brings them food. A male can have several families and can help everyone. In the wild, wolverines live up to 10 years, in captivity this period may increase to 16-17.

Description of the animal wolverine can last a very long time, but it can not be fully studied by scientists. However, with accuracy it can be said that this is a very clever, strong, cunning and aggressive animal on the path of which it is better not to meet.