Looking at a rhinoceros, at visit of a zoo or when viewing documentaries about the nature, involuntarily you are surprised, how many unrestrained power under hoofs of such «armoured troop-carrier» from fauna. 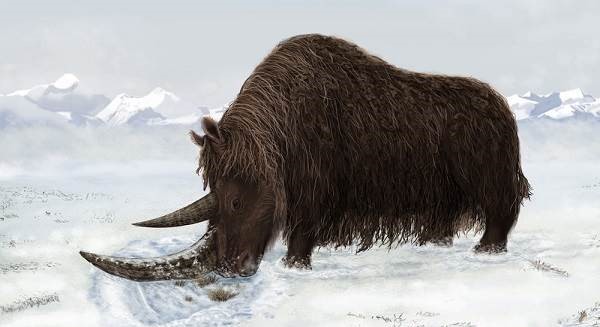 It is a pity that the woolly rhinoceros, the mighty giant widespread on all Eurasia in the period of the last freezing, it is only possible to imagine. As well as in a case with mammoths, reminders that they once lived on Earth, only rock paintings and skeletons which are held down by permafrost serve

Description and features of a woolly rhinoceros

Woolly rhinoceros – the died-out representative of group one-hoofed. It — the last mammal from family the nosorogovykh who was found on the Euroasian continent.

According to long-term works of the leading paleontologists of the world the woolly rhinoceros didn’t concede dimensions to the modern colleague. Large copies reached 2 m in withers and lengths to 4 m. This vast object on the thick thickset feet having up to three fingers moved, the weight of a rhinoceros reached 3,5 tons. 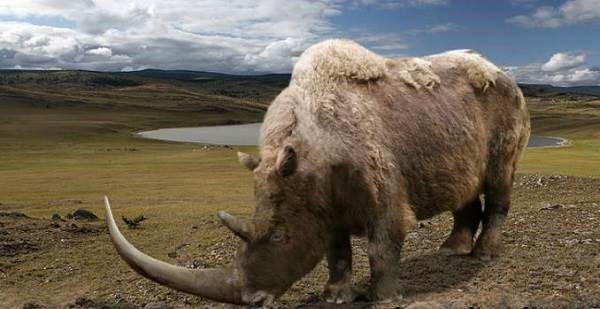 In comparison with an ordinary rhinoceros, the trunk at his died-out relative quite extended also had on a back a brawny hump with a large supply of fat. This fatty layer was spent by an animal organism in case of his starvation and didn’t allow a rhinoceros to be lost.

The hump on a nape served and for maintenance of its massive horn, flat from sides reaching sometimes 130 cm in length. The small horn located over big was not such impressive – to 50 cm. Were horned both females, and males of a prehistoric rhinoceros.

For many years, the found horns of a woolly rhinoceros couldn’t classify correctly. Indigenous people of Siberia, in particular Yukaghirs, considered them as claws of giant birds about which many legends are put. Northern hunters used parts of horns at production of the onions, it increased their durability and elasticity. 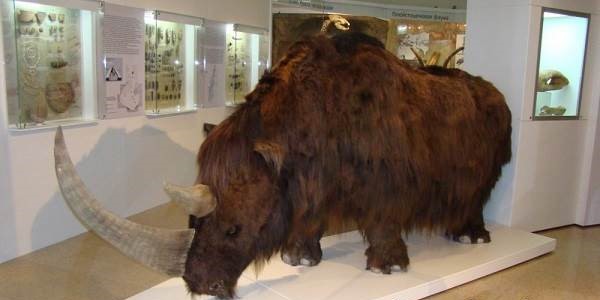 Woolly rhinoceros in the museum

Many delusions were and about a skull of a woolly rhinoceros. In the twilight of the Middle Ages era in the suburb of Klagenfurt (territory of modern Austria) locals found a skull which took for the draconian. Long time it was carefully stored in a city town hall.

The remains found near the town of Quedlinburg in Germany in general considered as fragments of a skeleton of a fantastic unicorn. Looking at a photo of a woolly rhinoceros, is more exact on his skull, it and the truth can be taken for a fantastic being from myths and legends. Not without reason a white woolly rhinoceros – the character of a popular computer game where to him attribute unprecedented abilities.

Jaw structure at a rhinoceros of Ice Age the very interesting: it had neither canines, nor cutters. Large teeth of a woolly rhinoceros were hollow inside, they were covered by an enamel layer which was much thicker, than on teeth of his present relatives. Thanks to a big chewing surface these teeth with ease frayed also a rigid dry grass, and thick branches.

On a photo teeth of a woolly rhinoceros

The mummified bodies of a woolly rhinoceros which perfectly remained in the conditions of permafrost give the chance rather in detail to restore his appearance.

As the era of its existence on Earth falls on the frosting period, no wonder, that the thick skin of an ancient rhinoceros was covered with long dense wool. On a color and texture its wool very much reminded indumentum of the European bisons, the prevailing flowers were brown and pale-yellow.

Wool on a nape was especially long and shaggy, and the tip of a half-meter nosorozhy tail was decorated by a brush from a hard hair. Experts consider that the woolly rhinoceros wasn’t grazed by herds, and preferred to lead the isolated life. 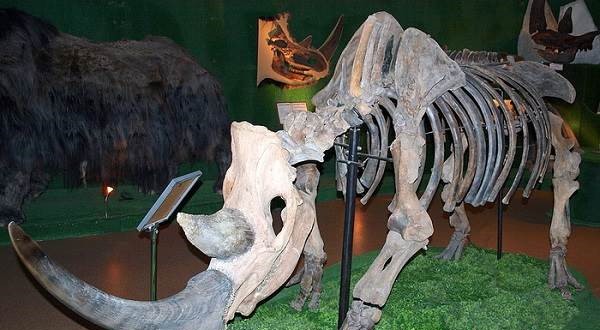 On a photo remains of a woolly rhinoceros

Time in 3-4 years the female and a rhinoceros male for a while created couple for a reproduction. Pregnancy of a female lasted about 18 months, one cub who didn’t abandon mother to two-year-old age was born, as a rule.

When studying teeth of an animal regarding wear and their comparison with teeth of our rhinoceroses, it was established that average life expectancy of this mighty herbivorous was about 40-45 years.

Habitat of a woolly rhinoceros

Bones of a woolly rhinoceros in a set find in the territory of Russia, Mongolia, in Northern China and a number of the European countries. By right it is possible to call the Russian North the homeland of rhinoceroses, after all the majority of remains is found exactly there. From this it is possible to judge an area of its dwelling.

Tundro-steppe was a home for representatives of «mamontovy» fauna, including for a woolly rhinoceros. These animals preferred to stick nearby to reservoirs where the vegetation was more plentiful, than on open open spaces of forest-steppes.

Food of a woolly rhinoceros

At the terrible appearance and the impressive size the woolly rhinoceros was the typical vegetarian. In the summer the diet of this one-hoofed consisted of a grass and young escapes of bushes, during ice cold winter – of wood bark, an osier-bed, birch and alder branches.

From the beginning of an inevitable cold snap when snow covered already poor vegetation, the rhinoceros had to dig out a forage by means of a horn. The nature took care of the herbivorous athlete – over time in his appearance there were mutations: because of regular contact and friction about a crust, the nasal partition of an animal grew stiff at his life. 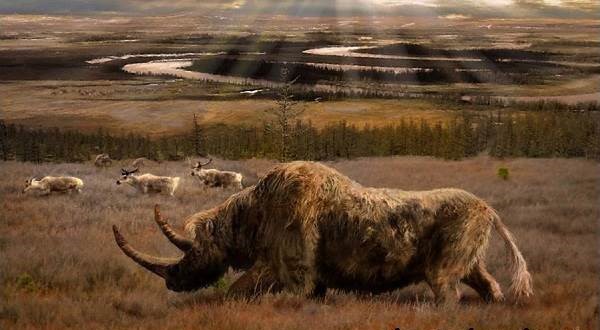 Why woolly rhinoceroses died out

End of a pleistocene, comfortable for life of rhinoceroses, became fatal for many representatives of the Kingdom of animals. Inevitable warming compelled glaciers to recede everything farther to the north, leaving plains under the power of impassable snow.

Under a deep snow cover everything became more difficult to find food, among woolly rhinoceroses there were skirmishes for the sake of a pasture on more favorable pastures. In such fights animals wounded each other, quite often wounds were deadly.

With change of climate also the surrounding landscape changed: on a place of water meadows and boundless steppes the impassable woods absolutely not suitable for rhinoceros life grew. Reduction of food supply led to reduction of their number, primitive hunters completed business. 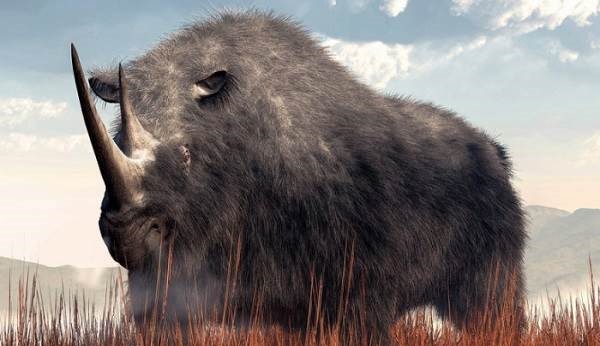 There are authentic data that hunting for woolly rhinoceroses was conducted not only for the sake of meat and skins, but also in the ritual purposes. Already then the mankind proved not from the best party, killing animals only for the sake of horns which at many cave people were considered cult and allegedly possessed miracle properties.

The way of life of a loner animal, low birth rate (1-2 cubs in some years), reduction of the territories suitable for normal existence and an ill-fated anthropogenous factor minimized population of woolly rhinoceroses.

The last woolly rhinoceros died out about 9-14 thousand years ago, having lost obviously unequal fight with the mother Priroda as a great number of others before and after it.