Peculiarities and habitat of the worm

Ordinary worm know, practically, everything. But few people know that there are amphibians on earth that are very similar to worms, scientists even gave them a similar name — worms (they are also called Cecilia). 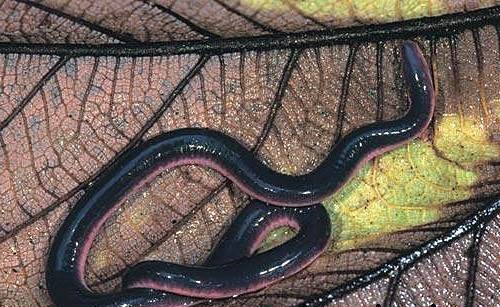 If we consider the worm and the worm in the photo , then there are hardly any differences. The appearance of both these creatures is very similar, the body is also divided into segments.

However, the differences are significant. The size of caecilia is much larger than the size of a worm, the worm is 45 cm long.

And if you meet the worm Thompson , which has a body length of 1.2 meters, then no one will confuse it with a worm.

By the way, the Thompson worm, or the giant worm , is considered to be the largest legless amphibian in the world. 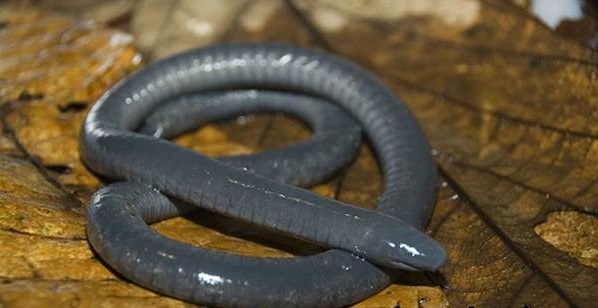 On the photo of a thompson worm

Another serious difference between a worm and a worm is a large mouth and serious, sharp teeth. Worms have two rows of teeth in the lower jaw.

And in general, nature has worked more responsibly over this creation — Caecilia has a skeleton that includes the thoracic vertebrae, the lumbar vertebrae, the ribs, the skull, but the sacrum is absent.

Under the skin of this representative of the fauna there are small, rounded scales. And the skin itself is covered with glands, which secrete mucus.

Eyes almost reduced. Worm replenishes their weakness with a keen sense of smell and sense of touch.

Worms can be called the smartest amphibian among their fellow tribesmen — the features of the brain structure proves that the development of this animal is much higher than the relatives.

But these amphibians have no limbs. It may seem that this creature consists of a head and a tail; in fact, the worm has no tail , it has just a long and narrow body.

The color of this body is quite nondescript. These individuals can be colored from gray-brown to black.

But there are also special «mods» who have blue skin color (for example, blue Cameroon worm Victoria Caecilian), and rich yellow.

The family of these amphibians is quite large, more than 90 species are known. And they all settled in Africa, Asia and South America, and are found in Central America.

Interestingly, in Australia, where a variety of animals feel comfortable, there are no worms.

In the photo is a yellow worm

The nature and lifestyle of the worm

The lifestyle of this amphibian is underground. Her whole body is also adapted to this — she has no eyes, only weak rudiments, there is also some hearing loss — the poor fellow has neither an eardrum, nor even the auditory opening, hence deafness.

And how else to call it, if it captures the creation of sounds that have a frequency of 1500 hertz.

But it seems that the worm itself is not too upset. And indeed — who should she listen to under the ground there?

She does not need to listen and beware of enemies, even moles do not eat her, too poisonous mucus is secreted on her skin.

The worm has a more important occupation — it digs the way under the ground, looking for food for itself.

But the digger from this creation is directly professional. A small head paves the way, like a ram, and a thin body covered with mucus moves forward without difficulty.

In the photo ring worm

This is where you remember the similarity between a worm and a worm. If a worm-hunter with a rich imagination can still be imagined, then its prey, which will voluntarily wait until the worm gets to it and begins to gnaw at it with its toothless mouth, it is simply impossible to imagine.

Therefore, the earthworm eats only plant residues. It is quite another thing — a worm.

The diet of this amphibian is not poor and far from vegetative, but this creature is also moving slowly.

And between those, «on the table» are various small snakes, mollusks, «brothers» -worms, and some annulate worms prefer ants and termites. That is, everything is small and living, that gets a tooth.

By the way, it would be far from easy to get a tooth if nature had not endowed the worm with poison, which is in the glands.

This poison simply saves this amphibian both from the attack of enemies and from hunger. This poison paralyzes small animals, and they cannot protect themselves from the sluggish worm. Toi can only grab the prey by mouth, hold it with his teeth and swallow it. 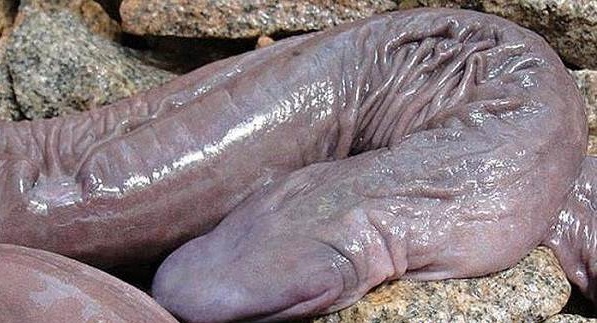 In the photo worm Eizelt

Reproduction and longevity of the worm

Scientists have not fully studied the reproduction of these amphibians, but it is absolutely certain that a full-fledged mating occurs in worms, which lasts about three hours.

In aquatic individuals, there are even special suckers that allow the “lovers” to be together for a long time during the act, because in the water without suckers it would be impossible for the worms to stay next to each other for three hours.

In general, offspring is a serious matter for these creatures. For example, the worms that are found in Guatemala are carrying eggs (from 15 to 35), for about a year.

But then the young are born very viable, agile and mobile. And it happens this way: in the oviduct the females develop eggs, but when the yolk supply ends in the egg, the larvae get out of the egg’s shell, but are not in a hurry to be born, for quite a long time they are in the female oviduct.

And the kids feed right on the mother itself, that is, the walls of her oviduct. To do this, the kids already have teeth. By the way, their mother also supplies them with oxygen.

And when the time comes, the larvae already leave the womb of a mother with fully formed individuals. And by the time of their biennium, they themselves can produce offspring. 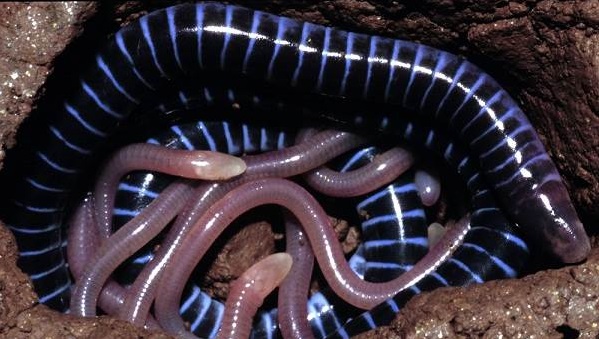 In the photo the worm with the cubs

And some worm species feed their newborn babies with their own skin. The babies stick to the mother and scrape the skin from their teeth, which is their food.

In this regard, such a wet nurse (for example, the worm Microcaecilia dermatophaga) by the time the babies appear is covered with another layer of skin, which is supplied with a large amount of fat.

This is an amazing animal the attention of scientists is not spoiled. Perhaps this is due to the difficulty of his research, but many questions about worms remain unknown.

For example, there is still no exact information about how long the life of worms in their natural environment.