Anyone who is fascinated by the world of aquariums, sooner or later draws attention to the fact that not only small fish can live in it , but also other, more interesting inhabitants, for example, the gray frog . 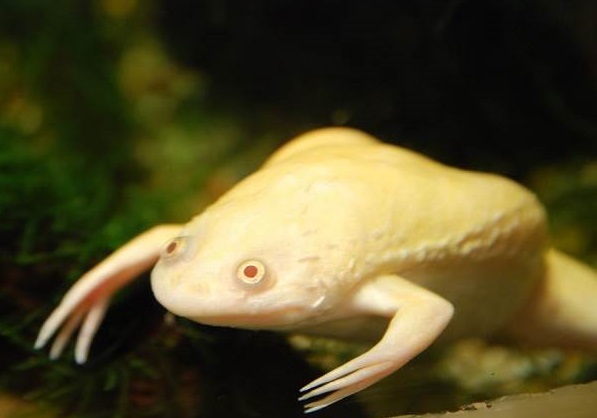 Description and features of spurgeon frog

Spur frogs , so popular with aquarists, are very ancient amphibians. Their fossil remains, found all over the world from Asia to South America from 1.85 million years.

They belong to the order of the tailless, representing a fairly large pip family, and any tourist visiting African reserves can meet these cute creatures in the wild. There you can also see in the natural environment the Cape species of these amphibians listed in the Red Book.

In nature, the body length of this amphibian is on average 8–9 cm; in home conditions, frogs are larger. The peculiarities include the fact that there are real teeth on the upper jaw of a flat neat head, and the fingers of the hind legs are connected by membranes.

Also on the fingers there are claws, thanks to which the frog got its second name — the clawed African. And the color varies from light pink to dark brown, there are also albinos.

The nature and content of the sporean frog at home

The maintenance of the spur-winged frog will require, first of all, the choice of an aquarium. When buying, consider the following points:

The last rule can be broken a little, for example, for a comfortable well-being of three pets an 80-liter aquarium is quite suitable, but it’s impossible to keep two frogs in 40 liters.

When choosing an aquarium, it is worthwhile to stay at low, wide and long, and not at high, the depth of these amphibians is not needed, but the space for swimming is necessary, frogs love to overcome the distance.

You also need to pay attention to the substrate, because most of their lives, pets will spend, sitting at the bottom. Therefore, no matter what soil is chosen, it should not merge with the coloring of pets, on the contrary, it is necessary that a spur frog stand out against its background , then in the photo , which will surely have a desire to do, the pet will look very comical and attractive. 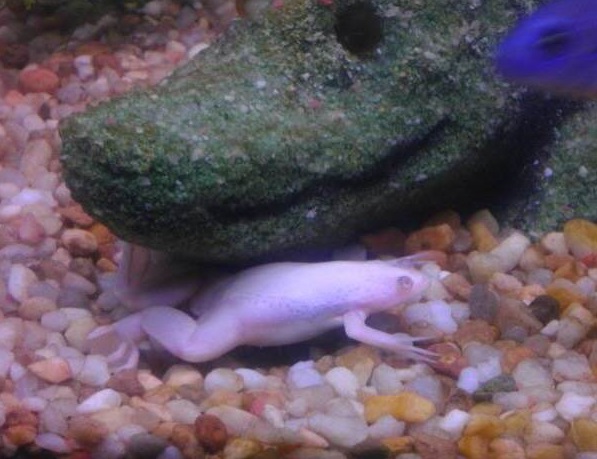 Also, when choosing a soil, you need to remember that small pebbles can not be used. The pet, moving along the bottom, will surely touch them, and when a pebble pops up a little — swallow it. If you want to use stones, they must be large and heavy.

As for the vegetation, the frogs will surely tear up the bushes with claws, and artificial plants will cause stress to the pet, since they will not break. The frogs will necessarily persevere and, as a result, damage the legs.

Shelters in the landscape of the aquarium should be necessary, the pet will not hide in them all the time, but it is very important to have your own «house» of comfortable size for an amphibian.

As for the water itself, these pets live in water with any pH value, however, they are extremely sensitive to the content of nitrite and ammonia in their habitat .

The water temperature should be from 19 to 21 degrees, however, the white spike frog loves the water warmer — from 20 to 23 degrees. And the pets are completely indifferent to the lighting, they tolerate any light, but they also need a “night”.

But speaking about the character of frogs, it is impossible not to notice that they are extremely selfish, and, moreover, very clever predators. Small fish for them — prey.

It is impossible to contain the spurs along with:

As for the species of spur frogs , there are only 18 of them, however, only 5 are available in the aquarium. They have exactly the same characteristics, differing only in skin color.

The albino frog is the most interesting , firstly, it is larger than the others, the average length when kept in captivity reaches 15-16 cm, secondly it is the most sociable and easiest to tame.

The third advantage of an albino is that she absolutely comfortably feels alone and in a smaller volume of water. For the «happiness» such a favorite enough 8-10 liters.

However, it is albinism that is prone to obesity and a sedentary lifestyle. To avoid this, it is enough just not to overfeed the pet, as if the amphibian did not ask for supplements, and run into the aquarium of small moving fish , which will force the frog to move.

It is also quite important that time that the life span of albinos is smaller than other spur-fingered ones, these frogs live up to 10 years, which is more than enough, because the contents of the aquarium want to be changed.

Nutrition and care for the spore frog

These amphibians love to eat, they are absolutely omnivorous, to the extent that a piece of fried meatballs lick off their master’s hands with pleasure. However, you should not get involved in such experiments, as they will not benefit the health and appearance of pets.

Young frogs should be fed once a day, until they reach 10 months of age, while adults are fed 2-3 times a day. If the frog has the ability to hunt, then artificially feed it is generally not necessary.

Ready-made feeds are ideal for feeding:

These amphibian pieces of shrimp, especially tiger, are also very fond of, and they are also not indifferent to beef and pork hearts. 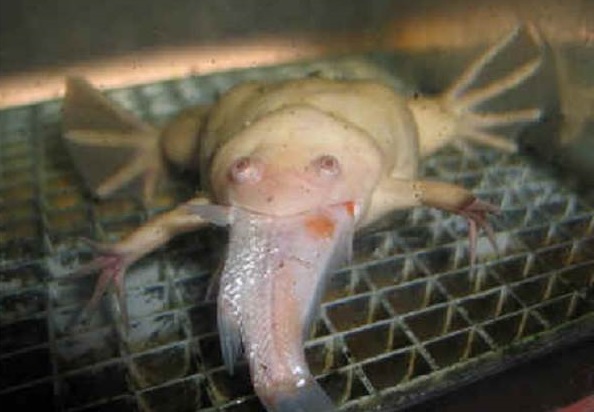 The diet of the spurted frog includes small fish.

You can not give as feed:

Caring for a sportive frog comes down to cleaning the aquarium, refreshing the composition of the water as needed and communicating with the pet, especially if the spur-fishes are kept alone.

Reproduction and lifespan of a spur frog

The breeding process of spur frogs will require at least two heterosexuals and a water temperature of 22 to 25 degrees. Accordingly, it is necessary to acquire grown up individuals, the difference between the sexes is noticeable from 7-8 months:

At a time, the female lays about a hundred eggs, if frogs are needed, this clutch needs to be removed, as otherwise. the female will eat at least half of the set. It is worth breeding to frogs after one and a half or two years, when their decorative qualities will be fully formed, which will allow you to choose a combination of optimal producers. 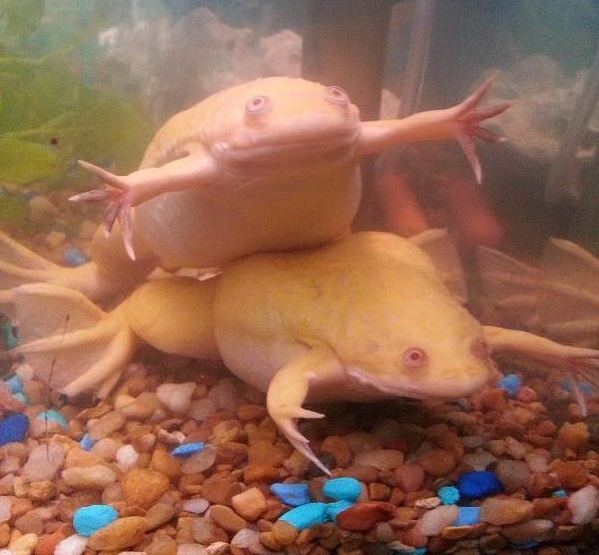 Mating of spur frogs during the breeding season

It is also not necessary to force eggs to be laid more than 3 times a year, as this will adversely affect the health of the frog ladies and affect the quality of the offspring.

In addition to the temperature of the water, for the successful fertilization of the clutch, darkness is needed, since the “boys” of the spur-like ones do not hesitate to carry out the act itself under illumination, but they are embarrassed to fertilize the eggs. Spur frogs live for 15-16 years old, with the exception of albinos, they do not reach even 12.

However, diseases can shorten the life expectancy of sporean frogs , mostly these amphibians start to hurt when cold or too hot water, or they are poisoned by rotten food remnants to avoid such troubles, remaining food, dead fish should be cleaned immediately, check the water temperature and. Of course, clean the aquarium.

Price and reviews of the sporean frog

There are a lot of reviews about these amphibians, among them there are both negative and enthusiastic. Find opinions faced with the contents of the spurs can be on any thematic forum.

However, it is worth noting that negative reviews are clearly given by those who simply did not understand the difference between fish and frogs, or were not ready to clean the aquarium, monitor the chemical composition of water, and so on.

There are also «casus» reviews from those who did not keep up with the temperature and did not notice the laying of eggs because of the chosen color of the soil, having received as a result several nice tadpoles, and that they had grown fat from the «additional» food ( the female.

It is possible to buy a spore frog in almost every specialized store, and its cost will depend on how much the breeder has requested + store surcharge. 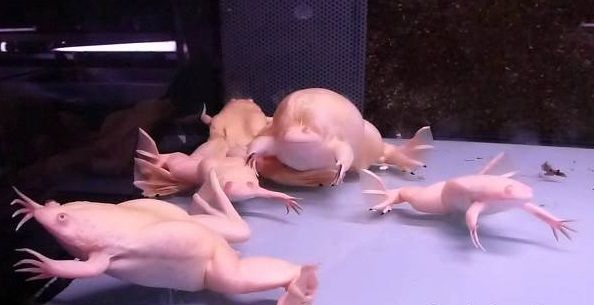 Breeding spur frogs in the aquarium at home

However, it is much easier to make an amphibian purchase directly, using either the sale advertisements, or, having independently found thematic forums, to inform about your desire to acquire frogs. The price spread is very large, from 50 to 700 rubles per piece.

You can also take frogs for free, people to whom this pet has not approached, very often give them “in good hands”. With the first experience of the maintenance of this amphibian, it makes sense to take advantage of such proposals.

In general, when starting this pet, you need to understand that there is no compatibility with others in the spur-winged frog , and if you imagine in your imagination a huge corner of the tropical underwater world with many different beautiful inhabitants, you should not start this amphibian.