As soon as the chirping of small wagtails near the reservoirs is heard, it is safe to say that spring has come. Although at that period only spring thaws appeared, and not all ice descended from the rivers. The main task of wagtails is to find food for themselves, since during this period there are very few of them. Therefore, they can be seen riding along the alleys in the barnyard. 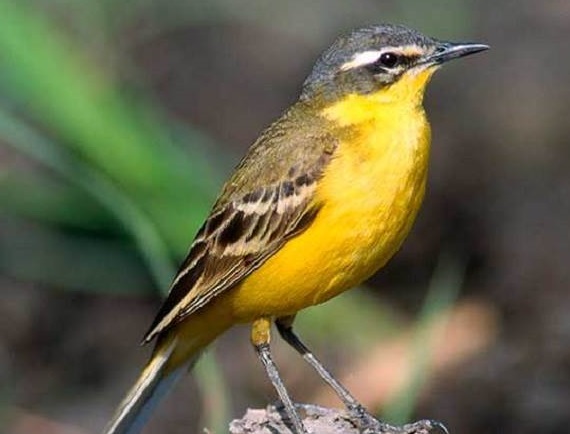 Peculiarities and habitat of the yellow wagtail

In the photo, the yellow wagtail (pliska) from the family of the wagtail, charges 5 genera. Visually very different. Even in one family there are distinctive features between adults of both sexes and their children. The description of the yellow wagtail will help to learn more about it. These are the most tiny individuals resembling sparrows. The height of an adult unit is 16 cm, weight — 30 grams.

By the color of the feather of the yellow wagtail, you can determine the gender. The female has more faded shades. It is perfectly visible in the abdomen. Male with bright yellow color, partner with white and yellow tint. The back is light brown in color with an olive tinge.

The head of different subspecies of the yellow wagtail has significant differences. It is united by a stripe of light above the eyes, like eyebrows. The surface of long thin legs with sharp claws, covered with scales of dark color. The tail is long grayish-brown with white borders around the edges. The beak is refined, pointed at the end. 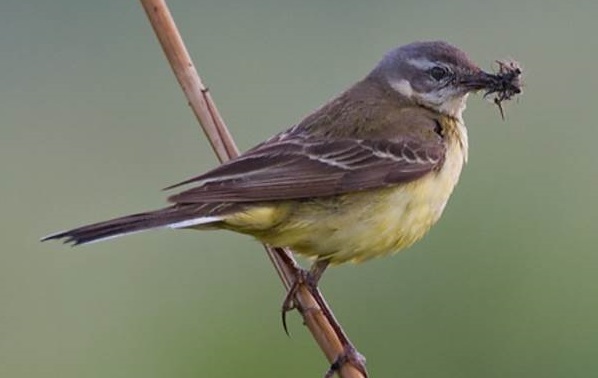 The chick is completely different from adults. The plumage of his dirty brown color. Breast and neck covered with variegated. Mostly he has brown shades. Clearly looming light strip between the eyes and beak. Chicks will look like their parents in the last month of summer.

The yellow wagtail lives in a permanent place of residence in Russia, North Africa, Alaska, North America. Pliska likes to be on the surface of the earth, except arboreal wagtails living on Sakhalin or in Asia.

The nature and lifestyle of the yellow wagtail

The yellow wagtail is a very nimble bird. It is rarely possible to catch calm. And at that moment she is busy singing. Wagtail produces its song in the form of a squeak, synchronous tweets. For their constant movement of the tail, as if shaking them, as well as for the yellow breast, they got this name.

A distinctive trait of character is courage. Birds do not succumb to the enemy: a cat, a kite, but on the contrary, make a noise, thereby causing other brothers to help, and begin to pursue the object of danger or to distract from the nest. Birds of other species, such as swallows, flock to a desperate cry.

Yellow Wagtails are considered migratory birds, besides those living in eastern and southern parts of Africa. Individuals arrive in their native lands in early spring. And the first to appear are the old males, then the females with the young are caught up. 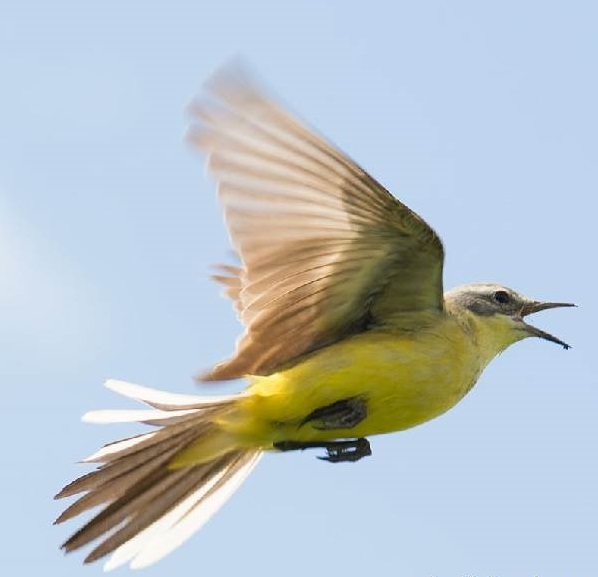 They live along the river reservoirs, where the bank is planted with shrubs. Lead a nomadic lifestyle throughout the summer. A signal for movement to another place is the grown up chicks, which can independently fly out of the nest. They constantly change the territory until departure to the wintering grounds.

In the fall, gathering begins in flocks. The flight passes at a low altitude (50 m.), Along the water channels. Wintering place — the central and southern parts of Africa. In the first decade of November, the flock is at the site of wintering.

The bird, the yellow wagtail can fly low, but they prefer to catch food on the ground, unlike the white wagtails. Moving quickly on the surface of the earth, the bird hunts for:

Having found its prey, the bird purposefully rushes only after it. Having received a reward for the pursuit, she swallows food. In this case, the simultaneous chase does not allow. As soon as the victims leave the hiding places, the hunt begins again. If there is not enough food in its territory, expels its not-asked relatives. 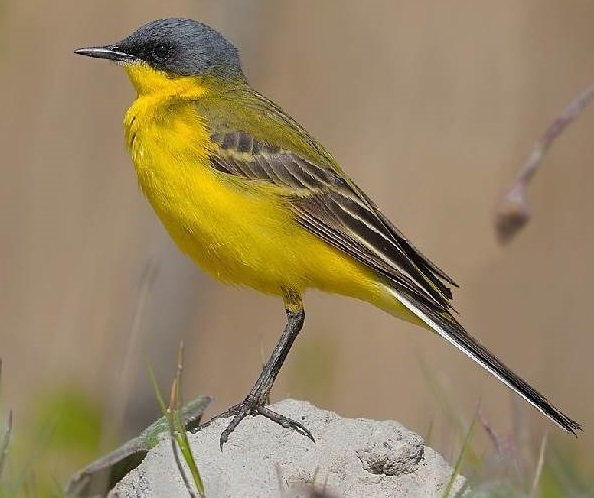 The bird comes to unfamiliar territory with a cry, attracting attention. Determines if there is a master here. If no one responded, the hunt begins. It happens that the owner is. In this case, the conflict does not occur, and the wagtail is removed back home.

Sometimes the object of the victim can be flying insects: gadflies, blood-sucking. In pursuit of them, she has to make extraordinary tricks in the air. In some cases, you have to find food, hunting in the water.

Approximately 30 days after returning to their homeland, marriage games are conducted. Males, having chosen a partner, try to please her. To do this, they are courting the female around, dismissing the tail, doing gentleman’s bows, squatting.

Next, the couple should take care of the home. The place for the nest, the yellow wagtail (female) chooses very carefully, so that there are many shrubs and marshland. 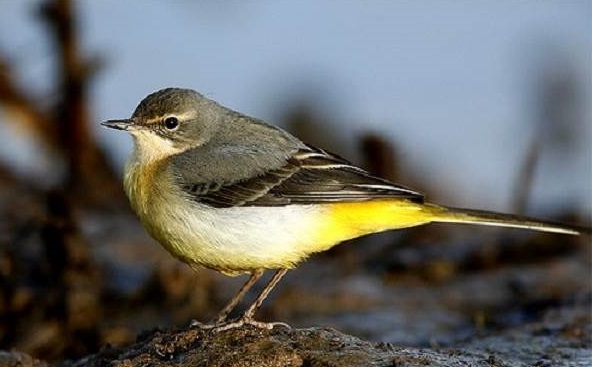 It may be under the branches, in the hole next to the bump. Sometimes females settle near human habitation in a shed or woodshed. Less often in a hollow, a tree root, crevices of rocks, a ditch, under a roof.

As soon as the female has determined the place, the nest is being built. In volume it is small up to 11 cm, in the form of a bowl. The bottom is covered with hair of various animals, horsehair. The side walls are built from the stems and leaves of plants.

The bird brings from 4 to 7 white eggs in a gray speck, brownish dashes, miniature size up to 15 mm in length. All two weeks the female incubates eggs, the male is nearby. Sometimes bears food partner.

In case of danger, the male instantly makes a noise. Cuckoos often throw up their eggs precisely pliskam. They put up with it, steadfastly hatch eggs tossed. A couple hatches their offspring twice per season. 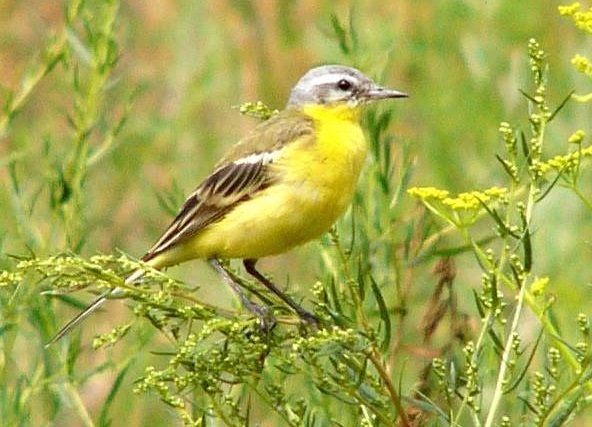 When chicks appear, both parents actively take part in their nursing. The shell is dragged as far as possible from the dwelling. While the young grow up, parents have to bring several hundred insects per day.

As soon as the young ones learned to fly (14 days), the parents are free. And small individuals get together and try to survive. In the autumn, they will be strong to move the flight to the winter. In the wild, the wagtail lives 10 years, and in captivity can live 12 years.