The mere fact that wombats were the inhabitants of our planet more than ten million years ago, indicates the uniqueness of this animal. Of course, many types of wombat have disappeared from the face of the earth, but still today we can talk and get acquainted with the life of Wombat animals. 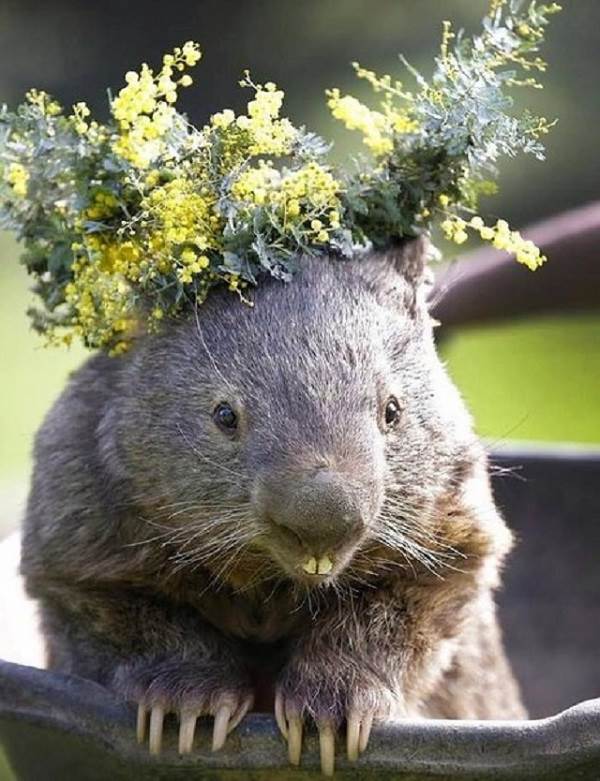 To date, the fauna is rich in two genera of the wombat family, which includes three types of these unique creatures of nature:

In the process of evolution, there were significantly more wombats, but they, unfortunately, could not survive in nature for a number of reasons. At least five such births are known. In the distant past, the closest relatives of wombats were pandas, these animals have many similarities.

However, approximately 36 million years ago, the evolutionary pathways of these animals change direction and move away from each other. In the picture of wombats you can still see some similarities.

Wombats are herbivores that are common in Australia, are herbivores and look very much like little bears and guinea pigs at the same time. The adult animal in length has a size from 70 centimeters to 1, 2 meters. Weight is in the range of 20-40 kilograms. 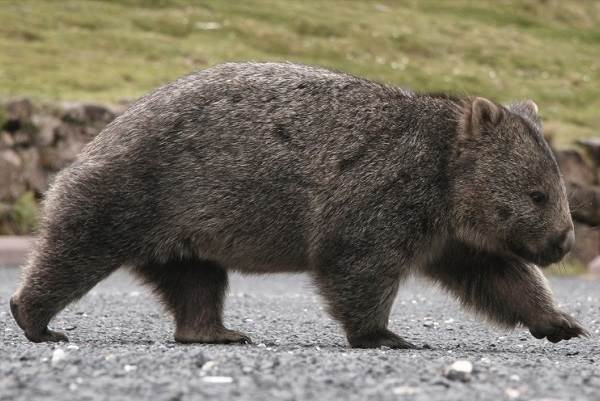 The constitution of wombats is rather dense and compact, a small body, with a fairly large head and four powerful limbs. Wombats also have a small tail, which is considered undeveloped. Above the wombats are covered with wool, usually gray or ashen.

The rear part of the animal is built in a special way, there are many cartilages, bones and hard skin, it is a kind of shield. If someone tries to get into the burrow to the animal, then the wombat, as a rule, substitutes his ass and so protects the passage inside to block and crush the walls of the striker’s holes.

Particular attention should be paid to the head of these funny «bears», it is large enough in relation to the body, with a slightly flattened, on each side are eye-beads. In case of danger, wombats can defend themselves and even attack their heads, they seem to butt up to it, although they do not have horns. 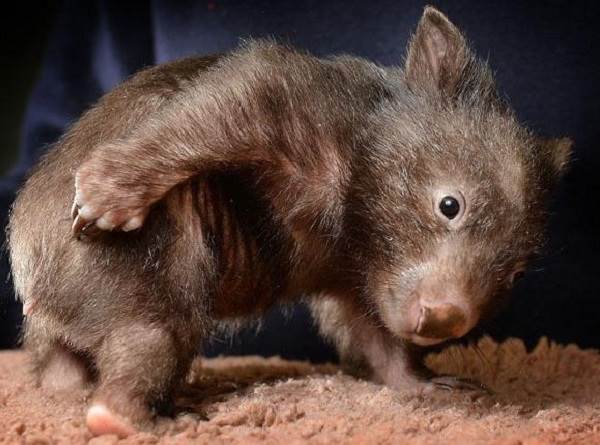 The structure of the jaw and teeth is very similar to the primary food-processing organs of rodents. Among marsupials, wombats have the smallest number of teeth: both in the upper and lower rows there are 2 front cutting teeth, and also chewing teeth, but they have no angular teeth.

The legs of the wombat are strong, muscular and strong enough, and there are claws that are present on each of the five fingers of each paw. Claws play a huge role in the life of the animal, as with their help they can dig burrows.

Wombs are famous for the art of digging, creating whole underground kingdoms-states, therefore sometimes they are given the title of the most talented and large-sized excavators. The tunnels dug by them can be up to 20 meters in length and reach 3 meters in width.

They build entire underground palaces, in which they can live as a whole family. Despite the short length of the paws, the wombats are able to develop a travel speed of up to 40 km / h. They can also climb trees and even swim.

Australia is the birthplace of wombats, but there is also the island of Tasmania, where you can also meet such unusual inhabitants. Meeting with a wombat is not such a common thing, although in nature their numbers are not small. 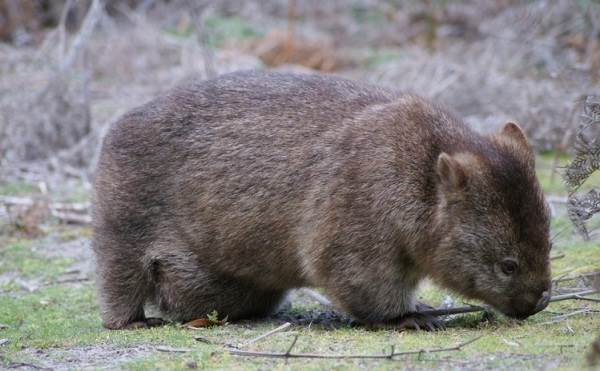 This is due to the way of life, because it is primarily underground. Therefore, for these unique animals, the main thing is dry soil, in which there are no underground waters, deposits of stones and a large number of roots of trees and plants.

Wombs build entire settlements under the earth, here there are spacious houses, and intricate streets — tunnels, through which the inhabitants of the dungeon move. Most of the day, wombats spend in burrows. They prefer the night life, so during the day they rest and sleep in spacious and cool houses, and with the onset of the dark, they go upstairs to warm up and refresh themselves.

Wombats live in large groups, so they occupy a large territory for life. Sometimes these are whole fields of up to 25 hectares. To determine the boundaries of their possessions, animals mark the territory with the help of their excrement. Interesting is the fact that the wombat pieces are in the form of a cube. 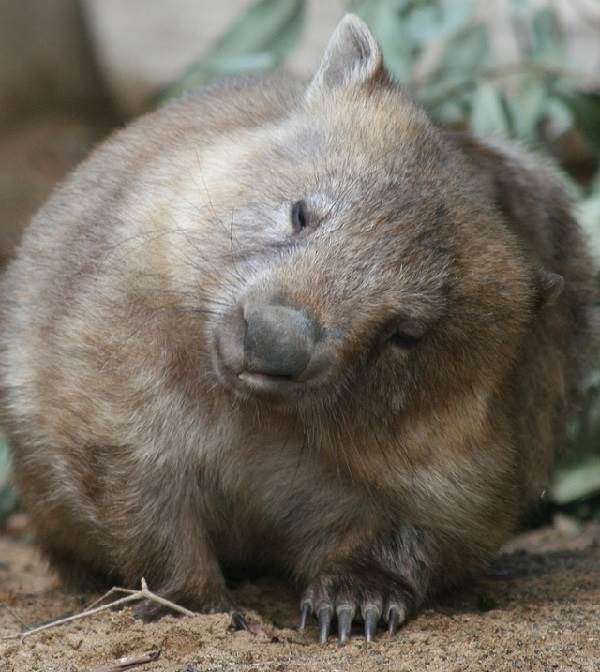 The character of the wombats is friendly, they are absolutely not afraid of people. In their natural habitat, they have virtually no enemies. However, if they have to defend their territory, they become aggressive.

When approaching danger, they take a stern look, begin to swing the head of impressive size and at the same time produce an unpleasant sound that resembles mooing. This kind of resolutely tuned wombat often scares off the attacker.

If this does not happen, then an attack can occur, wombats are used to fighting with their heads, just as goats or sheep do. Pictures of wombats in the natural habitat as a whole are very positive and peaceful, the main thing is that there is not a danger center for these animals nearby.

The appearance of the wombat cubs to the light does not depend on the season of the year and the weather conditions. Reproduction in wombats occurs throughout the year. However, in arid regions, however, scientists observe rather seasonal reproduction. 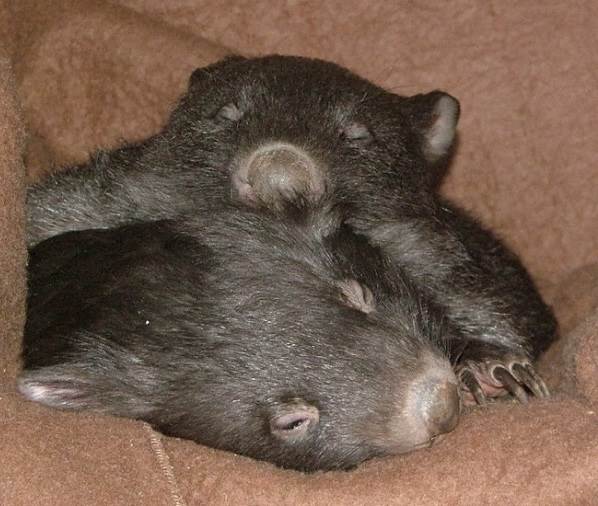 Wombats are marsupials, but in females the bags are in a special way, they are turned back so they do not interfere with digging the ground, and dirt and earth do not get in them. Pregnancy of the female lasts only about 20 days, then a single cub appears. Although the female has two nipples, it is impossible to bear and feed two babies.

The next 8 months after the birth of a baby, the baby lives with his mother in a bag, where he is surrounded by around-the-clock care and attention. However, after leaving this cozy place, about another year, until puberty, he will live next to his mother, who will continue to take care of her child.

In nature, wombats live on average about 15 years, and in captivity they can live for 20-25 years, it all depends on the conditions of the content and diet, and other factors.

About wombats say that they are true gourmets and love only first-class food, which they procure themselves independently with the help of their claws. Wombats like to eat young juicy shoots of plants, as well as rootlets, mosses, some berries and mushrooms. 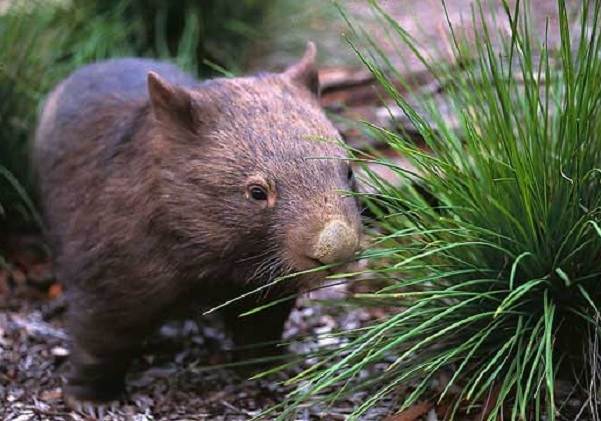 To choose the best food for yourself, wombats use their sense of smell and a special structure of their lips and teeth. Thus, they are able to cut the smallest and most delicate shoots under the spine to enjoy their gorgeous taste. Digest these foods unique animals to 14 days, because they have an extremely slow process of digestion.

Wombats are for animals that do not need to absorb a large amount of water. In this they are very similar to wilderness deserters — camels. They only need 22 ml of water per day, based on 1 kg of weight. Therefore, the animal easily enough thirst, and can some time and does without water.