Since ancient times, mankind has paid special attention to such ugly creatures like the earthworm. And scientists, in the person of Charles Darwin, decades later, I have studied their structure and importance in agriculture. And with good reason. With the coming of spring warmth, earthworms begin the hard work and labor, without knowing it, for the benefit of the people.

Earthworm, he annelid – a well-known resident on any plot. And it would seem, completely invisible, useless creature. However, any man, at least as it related to the earth will be very happy about it inhabitants of his garden. In the Russian Federation there is no more than hundreds of species of earthworm. But worldwide their fifteen hundred varieties. 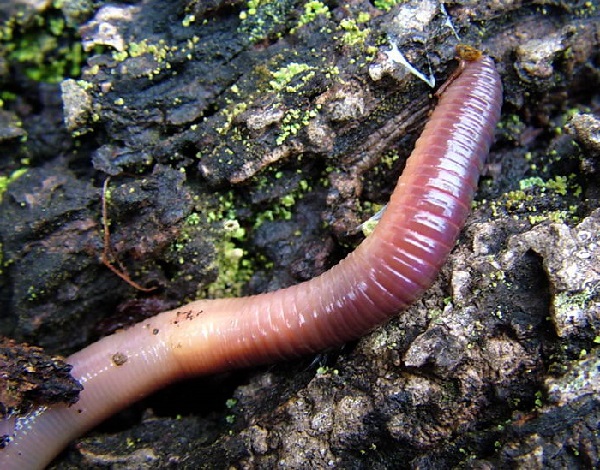 It belongs to the family of annelid worms, oligochaete class. All of his long body is composed of many rings. There may be seventy or maybe even hundred. As at length he grows more than twenty-five centimeters.

But there is the small two to three centimeter. Australian earthworms, up to two and a half meters in size. The color in the truest sense of the word gray-brown — crimson.

Also, on each ring, or it is also called a segment are bristles. Our ordinary garden worms usually of bristles grows eight pieces. They are classified as oligochaete. However, there are tropical species of polychaete worms, in which the villi grow dozens. The bristles help the worm to crawl, on all the soil lumps or dig burrows.

They can be found, taking the worm in his hands and swipe from back to front. But as an inexperienced person, it is hard to determine where his butt, just lightly run your hand along the body and back. Immediately you can feel. In one direction the worm will be completely smooth, and swiping in the opposite – rough.

Who ever took the worm in his hands, knows that he’s covered in a not very pleasant mucus, which to him is vital. First-the slime helps bespozvonochnoe to move freely in the ground. Secondly – as the worm has no lungs, he breathes through the skin. And thanks to the moisture located in the mucus, the body is saturated with oxygen. 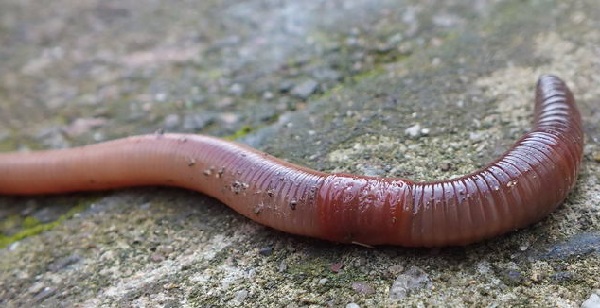 The body of the earthworm consists of two groups of muscle tissue. They are longitudinal and transverse. The transverse muscle, situated under the protective top layer of the skin of the worm.

With their help, the worm becomes as long as possible. And stronger muscles is longitudinal. They cut, reduce body. So, lengthening, shortening, animal and moves. The earthworm belongs to voicemaster animals. Consequently it has a full closed-loop circulatory system. As the livelihoods of their active.

Muscles contract many times more often than the worms pervichnopolostnyh. For this they need blood to provide the worm with all the nutrients and oxygen.

In the structure of an earthworm has a pair of blood vessels, one of them is called dorsal, the second ventral. Ring vessels that connect them together. The blood flows through them from the back to front and Vice versa.

In each ring, or as it is also called a – segment, there are a couple of tubes. The funnel on their ends opening through the bottom displays the excrement of an earthworm. This is the principle of the excretory system.

As for the nervous system, it is the nodal. Its components – the abdominal nervous chain and the peripharyngeal nerve ring. These endings consist of fibers, and they in turn respond to impulses of shorter muscles of the worm. Thanks to them, the worm can eat purposefully to move, to multiply, to evolve. 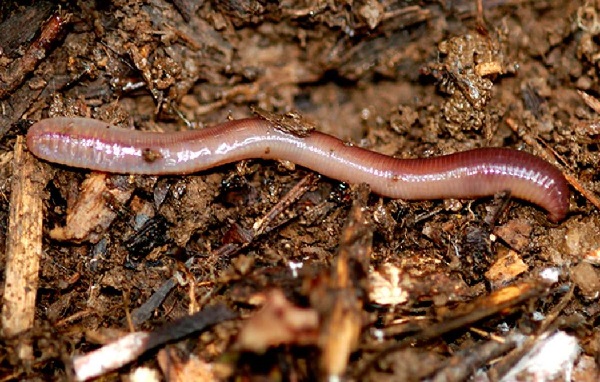 In the structure of the organs of the earthworm, not those who are responsible for smell, touch, sight, feeling. But there are certain cells, they are located along the body of the invertebrate. With their help, the worm is oriented in the dark and impenetrable land.

Even Charles Darwin assumed the existence of intelligence in earthworms. Watching them, he noticed that he was pushing to his dwelling dry leaf, the one just rotated with the narrow side. Which facilitates the permeability of the leaf through the dense, earthy hole. But the needles of spruce on the contrary, takes as a basis that they are not bifurcated.

All day, all life earthworm is painted on minutes. He climbs in the land, makes the moves, swallowing it. Burrows earthworm in two ways. He or, as already mentioned, swallows the earth, gradually moving forward.

If the ground is too hard. And after leaving the biological waste. Or, shove it with its sleek end, in different directions, and makes his moves. Passes out obliquely vertical.

Tech, earthworm, industrial soil, pulls to his burrow for insulation, a variety of leaves, veins of leaves, thin paper, and even scraps of wool. It burrows to a depth of one meter. And worms have larger sizes, and all ten meters. The worm works mostly at night. 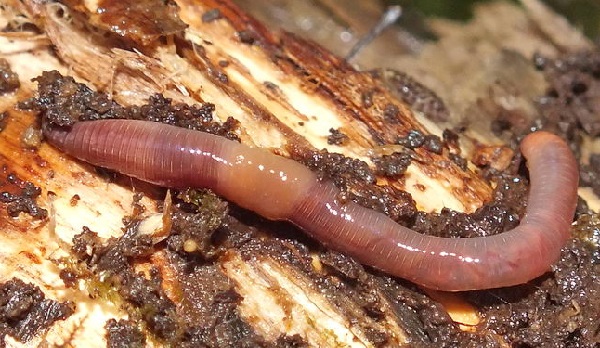 Why earthworms are a huge number of people crawl on the surface. That means he can’t breathe. It usually happens after heavy rains. The earth is clogged with moisture, and he has no oxygen. The arrival of cold weather, the earthworm goes deep into the soil.

Food of the worm is quite typical. Swallowing large quantities of earth along with food. Eating im good privalia and a little rotten leaves, mushrooms. But it should not have an unpleasant smell, otherwise the worm will not eat it.

It turns out that earthworms, even build a whole storage room and stacked there for winter food. They eat it only in case of critical need. For example, in winter when the soil is completely frozen, and about any ground food can be considered.

Proved food together with a lump of earth, through the throat, muscle movements, expanding his body, then narrowing, he pushes it to the back of the esophagus the goitre. After, it enters the stomach. From the stomach is sent to protravlivateli in the gut due to the enzymes that goes on the outside of useful biomass. 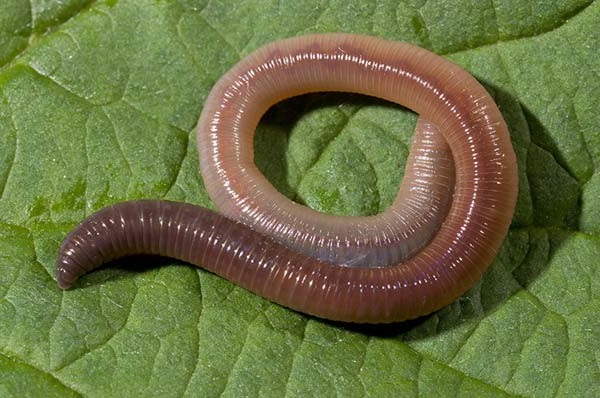 Making moves and at the same time biting, rain worms need to crawl out periodically on the surface to throw off the ground. At the same time, he the edge of the tail adheres to the hole, as if holding for her. And after, always remain earthen slides. Processed worm and the soil turns sticky. Then it dries, and is young, a match head balls.

These beads are saturated with vitamins, enzymes, organic substances, which, because of killing in the land of all bacteria, prevent decay, which is very important for plant roots. And still act on the part of the earth as an antiseptic, abyssaria her.

Earthworms can be of different sexes, and hermaphrodites. All of earthworms on the anterior third of their body is thickening. They are the ovary and testis. Hermaphrodites each other, let the seed. Already Mature eggs, within a dozen pieces oceanauts. And crawl away in different directions.

When a female is ready to reproduce, she is moving closer to the partner, intercourse. It formed something like a cocoon which consists of several tens of thickened segments.

It into a kind of zone. In this cocoon receives all the nutrients necessary for brood. After fertilization, the worm takes off this burden, he simply slides off the animal. On cocoon, both sides quickly shrink down to future offspring not dry, not yet born. Then, for four weeks, Mature and are hatched small worms.

Once born, they crawl in all directions. And from the first days of his life begin to actively work on processing of the earth. And at three months of age, grown children reach the size of adults.

Another fact about earthworms ability to regenerate. If someone, or something will split it into two halves. Over time, each half will become a full member. This is one way of reproduction, but not sexually. 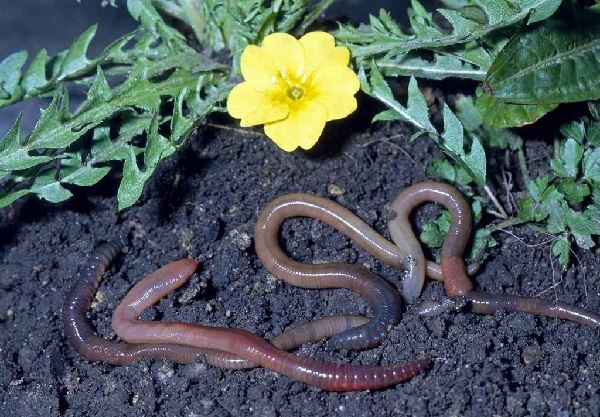 And the unpleasant fact is that worms are «capsule» for storage in it of parasites. In the case of a worm eating a chicken or a pig, there is a high probability of infection of an animal or bird helminths. The life of a worm to last more than five or six years.

The role of earthworm in agriculture is very important. First, saturate soil with oxygen, this is needed for everything growing on it. His moves, help the roots to develop fully. Evenly distributed moisture, and the soil is well ventilated, vzryhlite. Due to the constant movement of the earth, with worms, it retrieves the stones.

Also, their recycled remnants of adhesive, they glue the soil, preventing it from blurring. Well, of course, fertilize the ground when you tighten it leaves, insect larvae. It’s all rot and is a great, natural bio additives.