The habitat of the Sparrow

Cold winter, when the birds are very little, or in the hot summer, when the voices of many birds, with someone always there is a small, gray — brown bird – a Sparrow, which people are so accustomed to that long ago and don’t notice it. And in vain.

Sparrow – a small bird, measuring up to 18 cm, and weight not more than 35 g. But few people realize that this extremely intelligent, observant and cautious bird. 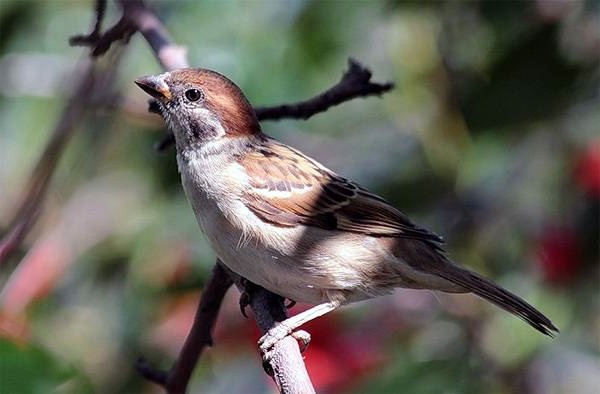 Otherwise, she would not have chosen such a smart, unpredictable and dangerous neighbor — man. The Sparrow not only easy to get along, but develops with the person new to earth.

For example, for the person this little one moved to Australia, settled in the North of Yakutia, agreed even on the tundra and the forest tundra, although there her live is not comfortable. Now on the planet few places that weren’t inhabited by sparrows.

Sparrow flies to warmer climes and, in General, prefer to lead a sedentary life. However, this does not prevent him to fly beyond the already selected areas in order to look new, unoccupied areas.

The main feature of this interesting bird in that it necessarily lodges near to the person. It has postponed its mark on her behavior and way of life. The bird has a great memory, her new reflexes associated with human behavior, it can make decisions and even to build a logical chain.

Few people pay attention to it, but if you recall, everyone agrees that the cats the birds are wary, but not too afraid of her – unable to wait for hours, when it goes away from the trough.

But with horses, the sparrows and not fearful. They perfectly coexist with chickens, and rabbits — from personal experience, the bird knows that the danger from these animals, but to eat their food. 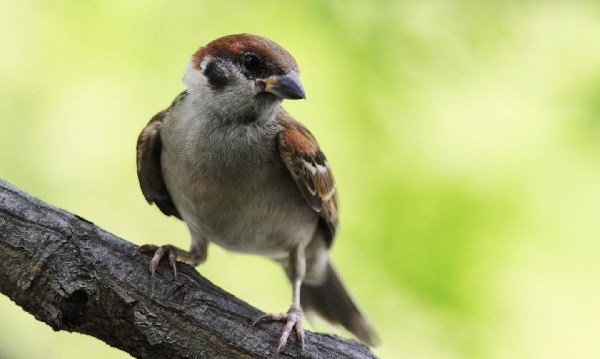 To dogs them is ambiguous. In the village yard where the dog is indifferent to the flutter and chirp of the birds, sparrows dogs react not too alarming, but this can be explained by the fact that in the same yard, as a rule, the same dog that the sparrows are already known. In cities where many dogs, sparrows belong to the dogs are not so relaxed.

Another interesting feature – no matter how many centuries the Sparrow was not the nearest neighbor of the man, to catch a Sparrow is harder than any other bird. And it’s quite possible to tame it. Therefore, a photo of a Sparrow with a man can be seen very rarely.

The nature and way of life of a Sparrow

It is worth saying that the nature of sparrows bad. They are jealous of his possessions, and every time I put up a strong fight (same with Tits) for your yard, Park or other warm place.

By the way, if there is no interference by other birds, sparrows can easily create a scandal with his relatives. Moreover, according to the passions he will not concede just defending its nest. Who has not heard the voice of the Sparrow, especially in early spring. 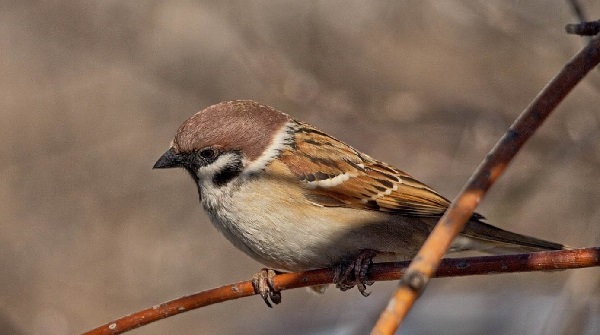 Sparrow does not tend to a quiet and silent stay. Any movement anybody makes flocks of these birds a strong wave of emotions. And in the spring, during the creation of couples, sparrows satisfied with just fighting bird.

Fights can start on the roof, on the tree branch and continue high in the sky. As a rule, to the bloody wounds is not reached, the sparrows too smart for that, after the fights bullies scatter, but not for long.

The types of sparrows

Perhaps someone heard about the strange bird «Sparrow –camel.» Nothing in common with the Sparrow, but this bird does not have any form of a Sparrow is not. 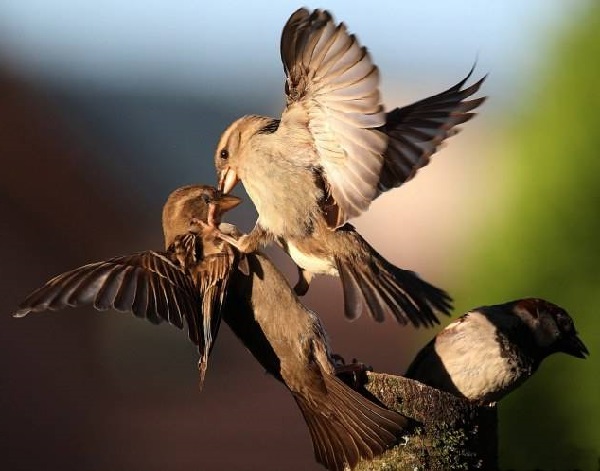 This name is well-known ostrich which, translated means «Sparrow – camel.» All the passerine species have some features, but the main characteristic of this bird is common to all.

Sparrow can not be called a foodie. Its menu is diverse – from insects to waste human food. Moreover, modesty is also not their strong point, in anticipation of the piece they can jump near the table person (outdoor cafes, summer terraces), but if he sits still, and to jump on the table and worry about yourself.

However, at the slightest movement of the bird deftly disappear from the table, trying to grab the tasty morsel and crumb. And yet, despite the pugnacious and quarrelsome character, of the scandals over food these birds are not satisfied. If a Sparrow finds a lot of food, he flies over their tribesmen, and then start eating.

To unfamiliar the poop wary. The whole pack will not have some dish, yet not one Sparrow will test the food. And only then all the flock. In the villages in the summer these birds live freely. They peck seeds and grains planted crops, eat berries, and all kinds of deterrent devices they are small. 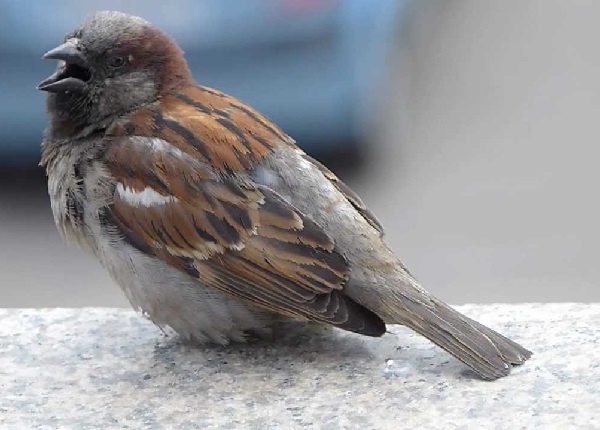 However, rural residents are forced to endure such a neighborhood, because the birds consume caterpillars and other insects. In fact, if the sparrows to watch the bird more eager to feed in the cage of the rabbit or chicken Cup than to seek out some sort of larvae.

But it is not necessary to take offense. The main food of the Sparrow, though, lies in plant food. Insects the sparrows eaten only in the spring, right when feeding Chicks. However, without the help of these birds from insects it would be difficult to escape.

Reproduction and life span of the Sparrow

In the spring the sparrows start to build nests. Pronounced forms of nest these birds do not adhere to. Moreover, they seek every opportunity to adapt your house something or to take someone else’s nest.

You can see how the sparrows fly out of the birdhouse, the swallow’s nests. Will fit any pipe, ledge, recess of the house, if nothing suitable is not found, the birds start building nests for themselves. Often it is arranged under the roofs of houses, pavilions, attics, or even in the trees. 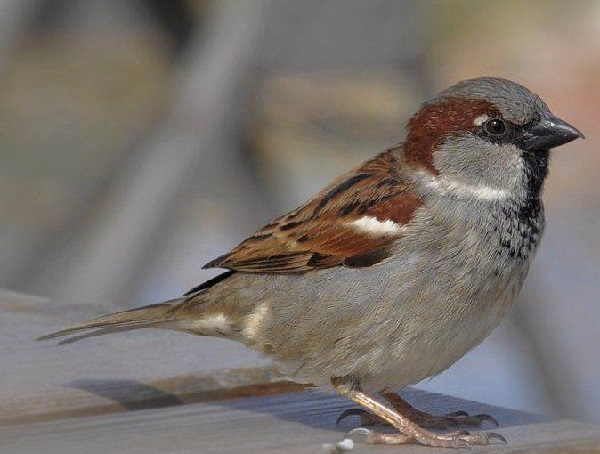 A female may the season bring three broods. First laying takes place in April. However, these terms may vary from the one in which climatic and weather conditions is a bird.

Some females ( especially yearlings) and did not prefer to lay eggs in may. Finish-nesting birds in August, after which occurs immediately post-breeding molt. Usually the female lays 3-9 eggs. It is noteworthy that the sparrows in rural areas is always observed more eggs than the «urban residents».

The above discussed good memories of these birds, they know that near the cattle, which contains the village all year round, to feed a greater number of birds will be easier than in dubious urban environments. Care of offspring by both parents divide equally. They hatch Chicks together and feed them together too.

Time, these words are clearly defined – they need to withdraw more than one offspring, so 4-5 days the female goes on laying eggs and hatching, and then about two weeks parents feed Chicks in the nest, another two weeks spent on the education of juveniles after leaving the nest, and only then begins preparations for the next clutch. Chicks sparrows feed insects initially, then grains and seeds and fruits of various plants.

Previously, it was assumed that birds and creatures are extremely useful. However, now scientists are beginning to doubt the usefulness of some birds. And the Sparrow fell into the «questionable friends». And yet, this tiny bird is more than harm. 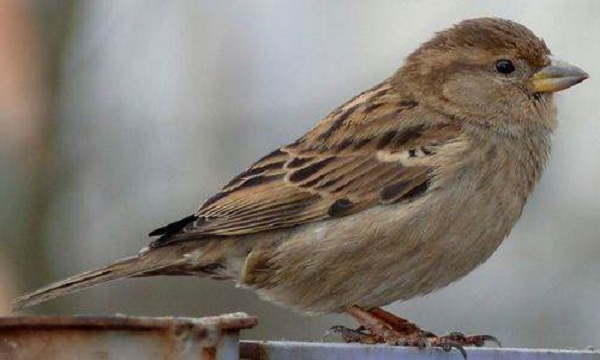 It is sufficient to cite the classic example – once the Chinese thought that sparrows destroy their rice harvest, so the bird was declared the main enemy, destroyed them , knowing that the sparrows can not be in the air for more than 15 minutes.

The Chinese just gave them to sit down and the birds fell to the ground already dead. But after that came the real enemy — insects. They proliferated to such an extent that the harvest of rice is not left at all, and famine killed nearly 30 million people.

So is it worth breaking your head over what has already passed in history. Little bird Sparrow occupies a worthy place in nature, and a man only needs to protect.