Klest. About the life of Christ birds

About this mysterious bird stories. You can not believe the legend, but the actual uniqueness of these small birds, the size of a large Sparrow, attracts the interest of any man, indifferent to the natural world. 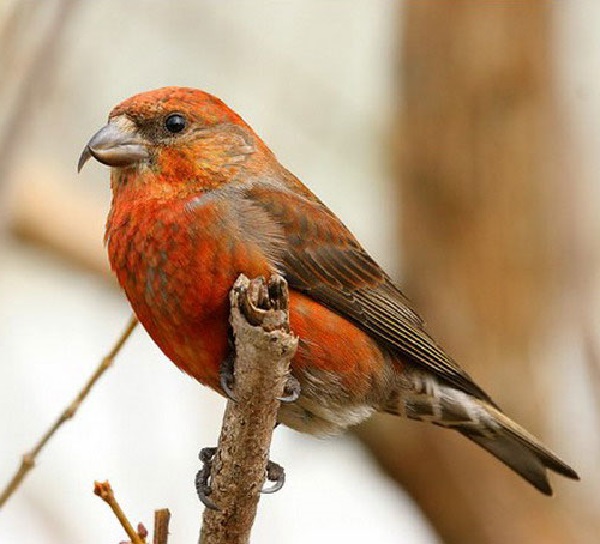 During the crucifixion of Christ, when his sufferings were severe, the bird flew beak and tried to pull the nails out of Jesus ‘ body. But too little effort was fearless and good crumbs that just traded his beak and blood-stained breast itself. God thanked the little patroness, and endowed her with special properties. It was a crossbill, and the uniqueness of its three manifestations:

after the incorruptibility of life.

The answers to the mystery lie in the lifestyle of birds, but it is no less interesting.

Bird crossbill — small size, up to 20 cm, passerine, distinguished by its dense, stocky stature, a short forked tail, a large head and a special beak halves of which are bent and shifted in different directions, forming a cross.

Why crossbill beak becomes clear when Klest begins to rapidly valuepath seeds from the cones. Nature has perfectly adapted it to the procuring of such food.

Tenacious paws allow clesto climbing trees and hanging to the cones upside down. The color of the breast of males is red-crimson, and the females are green – gray. Wings and tails Klestov cross in brownish-grey tones. 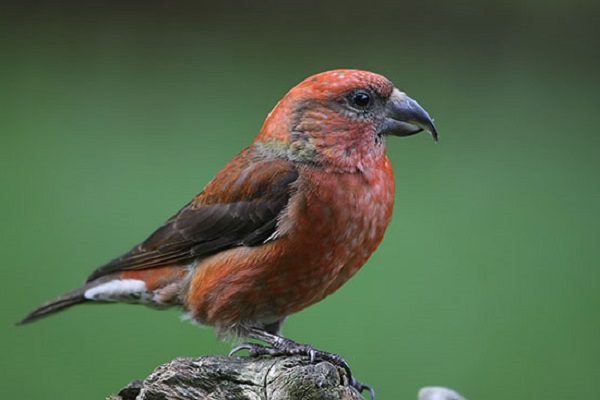 Singing Klestov in the high notes, reminiscent of Twitter mixed with the loud whistle and is used for communication of bird flocks. The roll is usually the case in small flights, and the branches of crossbills silent.

There are five or six types of Klestov, of which the three main inhabited on the territory of Russia: Klest-elovik, Klest-sosnovik and white-winged crossbill. They all have similar feeding behavior and habitat. Names talking about small features of the types of preference coniferous forest environment and the presence of white feathers on the sides.

The ancestors of modern Klestov very ancient, there were about 9-10 million years ago. In spruce and pine forests of the Northern hemisphere formed the principal Klestov. Their dispersal depends on the yield of cones, which are the basis of feeding birds.

Therefore, crossbills live in the tundra and steppe areas, make considerable migrations to places rich in food. Known cases when ringed birds were found over 3000 km from the original site.

In Russia live in coniferous forests and mountainous South of the country, the North-Western regions. The bird can be found in mixed forests with a predominance of spruce. In the cedar forests crossbill lives. Enemies crossbill in nature are almost there.

The reason is that due to the constant use of seeds, birds with life itself, «embalmed» and become very unpalatable, and rather bitter to predators. So after the natural death they are decomposed, are mummified, which contributes to their prepared the body with high resin content. 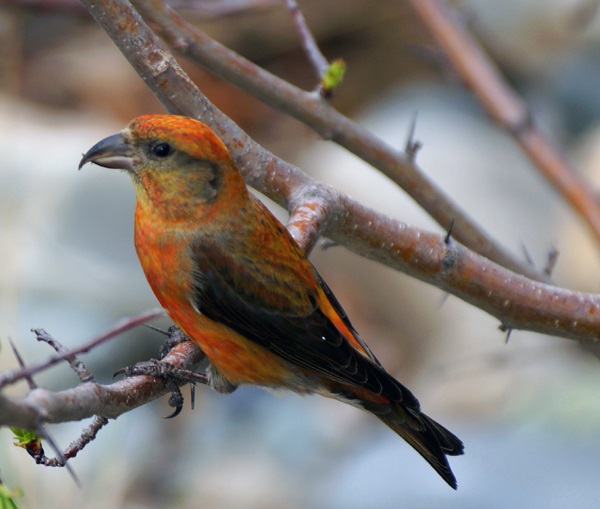 Flying crossbills are good, but to say that Klest – migratory bird, or Klest — resident, is impossible. Rather, Klest — the representative of migratory birds. The wanderings of birds associated with the harvest.

In places, the saturated feed, the birds spend their time in endless lasagna on the trees, the shape of the beak allows the crossbill to do it cleverly, like parrots. This feature and the bright coloring of the feathers, they are called Northern parrots. They rarely go down, and the branches feel confident, even upside down.

To think that crossbill eats only seeds of fir or pine cones is a fallacy, although this is its main diet. The crossbill’s beak tears off the scales, exposing the seeds, but cones only one-third is spent on food. The bird is not troubled inaccessible grain, it is easier to find a new lump. The rest flying to the ground and feeds for a long time mice, squirrels and other inhabitants of the forest. 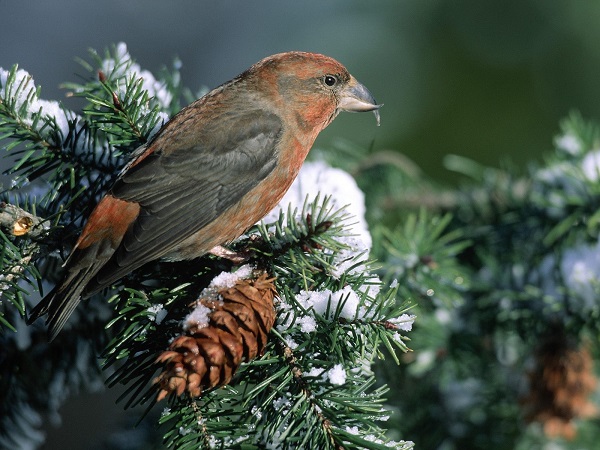 Crossbill feeds additionally, especially in times of poor harvest of cones, buds of spruce and pine, chrysal speaking on the resin on the branches together with bark, seeds larch, maple, ash, insects, and aphids. In captivity it refuses meal worms, oats, Rowan, millet, sunflower and hemp.

Unlike other birds, the Chicks have Klestov appear in the coldest time in winter, often at Christmas, as a Supreme grace of the legend. Contribute to this feed reserves.

The nests are built by the female crossbill on the tops of the conifers or on the branches under the safe cover of the large needle paws from rain and snow. Construction is afoot with the occurrence of the first frost and is subject to the most severe tests: insulated bed of moss, wool of different animals, feathers, lichens. 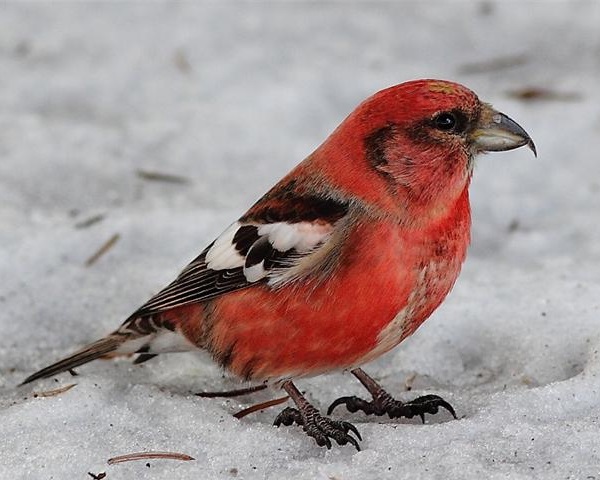 Nest walls are durable: made of artfully intertwined branches formed inner and outer layers, otherwise double walls of the home. The nest is often compared to a thermos by maintaining a constant temperature environment. Crossbill in the winter despite the cold weather, active enough to provide their offspring.

The incubation period from laying 3-5 eggs lasts for 15-16 days. All this time the male cares for the female, feeds, seeds, warmed and softened in the craw. Chicks 5-20 days of life in different species are starting to leave the nest. The bill is straight at first, so parents 1-2 months to feed the young. 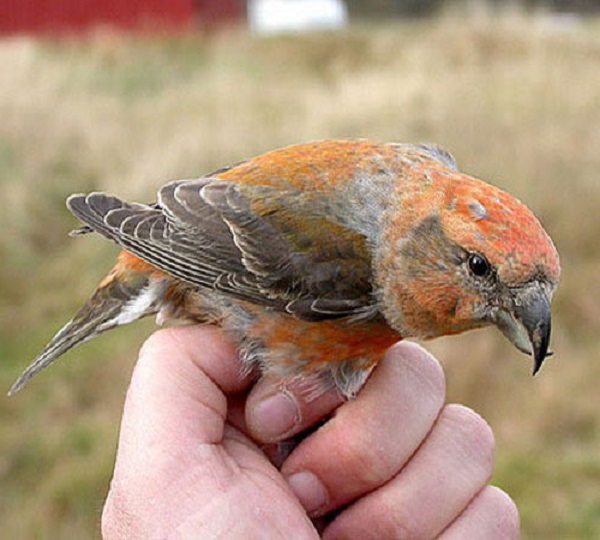 And then the Chicks master the science of cutting cones and with modified beak begin an independent life. Nestling crossbill immediately gets colored clothes. First, the color of the plumage is gray with scattered spots. Only to the year birds are colored in adult clothes.

The contents crossbill at home

Crossbill, the bird which is extremely interesting and socially active. Quickly get used to life in a new environment, be trustful and sociable. Besides the constant movement on the grid can be smart and get out of it. What Klest – Mockingbird, I know the owners of several birds: crossbill weaves in their trills heard the voices of other birds. 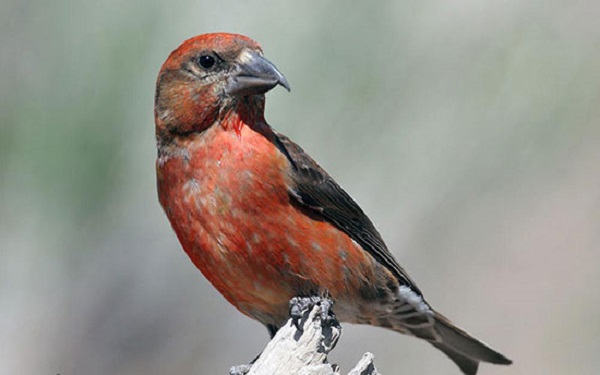 When itinerant musicians taught Klestov beak to get happy tickets or participate in divination. The ability to learn simple actions makes birds Pets. If crossbill lives in a small cage without maintaining nutritional requirements and temperature, it loses its crimson color that fades to the color of the females, and then dies.

The contents of birds in good conditions contributes to the preservation of their bright color and longevity to 10 years. In captivity, birds breed well when conditions for nesting.

Fans of breeding birds achieve different color and voice variations, and so it becomes clear why the crossbill comes the voice of a Canary or an outfit of a bullfinch. The study Klestov – fun, joyful communion with the most ancient birds on our wildlife.