White and Red Book. Speech about the vulture. The white-headed view of this bird is endangered. The list of vulnerable birds came back in Soviet times. Then the union included Armenia. In October 2017, the Red Book animal was rescued there, though not to the scale of a species. Helped one individual, found near the village of Nerkin. 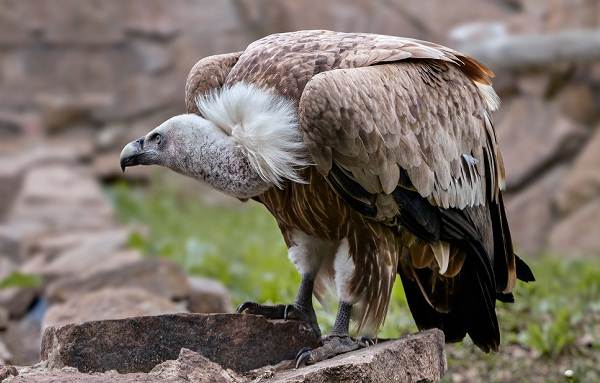 According to X-ray data, the bones of the right wing were broken for 3 weeks in an emaciated predator. Vulture cured, but could not regain the ability to fly. Now they admire the bird in one of the zoos of Armenia. And where to go to admire the free vultures?

Description and features of griffon vulture

Griffon Vulture refers to hawks, as many of them feed on carrion. The species is rare in Russia. The World Conservation Union is not worried about the position of the bird.

However, the decline in the number of white-headed vultures is celebrated around the world. However, the reduction is slow. Ornithologists blamed the phenomenon on the cyclical nature of the development of any population.

Griffon Vulture is a large bird. The length of the feathered body is 92-110 centimeters. Wingspan reaches nearly 3 meters. The hero of the article can weigh 15 kilos. 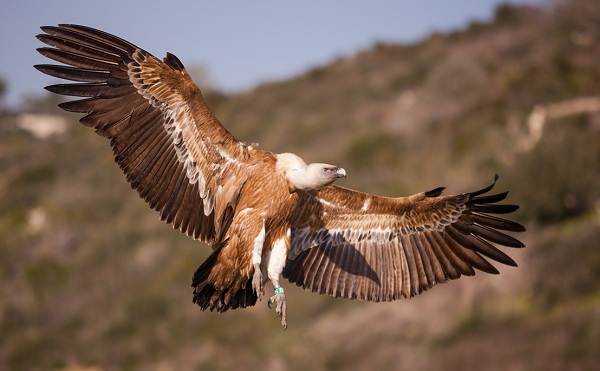 However, the head does not correspond to this mass. On the background of the body it is tiny. The miniature head adds a short feather. It grows on a long neck, which due to this seems thin.

At the junction of the neck into the trunk of a vulture, a collar of long feathers is visible. They are already brown-red. Such is the coloring of the whole body of a white-headed bird. In females and males, the «suit» is no different.

If you look at the photo where the griffon vulture soars, the width of the wings and the length of the tail are noticeable. Their area is increased so that the massive bird kept in the air. Vulture rises into it with difficulty. From the flat area the bird can not fly up. 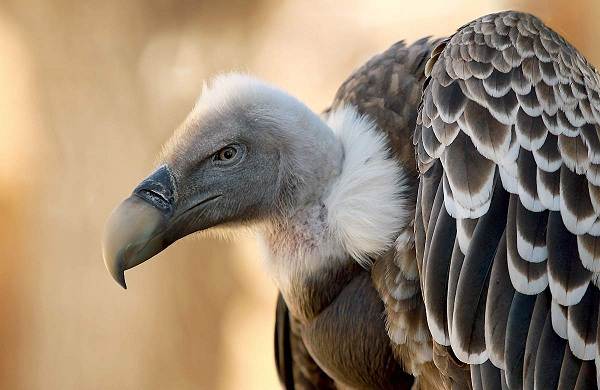 Taking off from the plains with difficulty, griffon vultures choose mountainous areas for life. Feathered meet in the North Caucasus. Beyond it, the Vultures are in Vorkuta, Western Siberia, and the Volga region. However, these are temporary places where the griffon vulture lives for food. In its native lands, the bird does not always find it, going on trips of gastronomic sense.

In addition to the mountains, the vultures love arid regions. They are high risk to life. Birds survive by killing others by eating corpses. However, the flat desert again, sipov not satisfied. Hawks seek out arid areas with cliffs. Sitting on them, white-headed overlook the territory, looking for something to profit.

Listen to the voice of a griffon vulture

Arid areas with rocks are located west of the mountains of Central Asia. Accordingly, the Sipov can be searched on the slopes of the Himalayas, the Kazakhstani Saur ridge, and the eastern Tien Shan, which is territorially related to Kyrgyzstan. 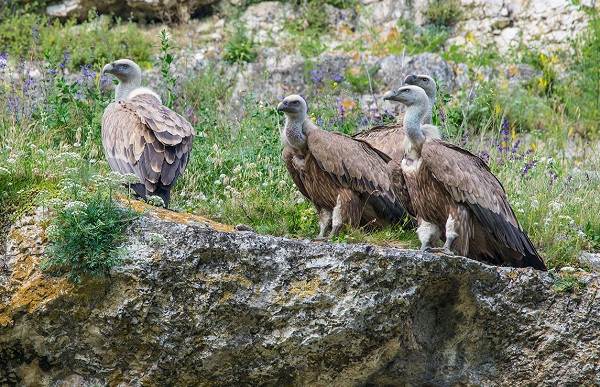 In Russia there were no suitable desert landscapes for the hero of the article. Therefore, the «Red Book» has gone. The Griffon Vulture in it is classified as a small species with a limited habitat. That is, there are not so many representatives in general, but specifically in Russia.

The hero of the article is a scavenger. The found vultures are torn apart by the hooked beak and claws of the same shape. Feathers do not eat bones and skin of prey. Birds eat exclusively muscle tissue, that is, meat.

There is no competition for carrion found. Dozens of whiteheads fly to the feast. Therefore, if one individual has found a meal, others no longer need to think about what to eat. 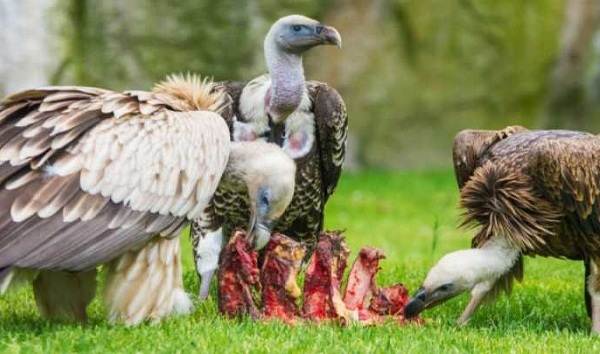 The griffon vulture prefers carrion, but in its absence they begin to hunt. The hawkish victims are usually small. They catch hares, rodents and even snakes. However, the size of the bird itself led many to assume that it steals sheep and even children.

Such are the beliefs that have existed in Western Europe since the Middle Ages. Then, seeing bkhelogolovyh devouring corpses, they began to fear that the birds carry disease, impurities.

A heap of fears and fears associated with white-headed birds caused their destruction in Europe. In the 21st century, there is a rarity there, as in Russia. Meanwhile, being a scavenger, the animal is the orderly of nature, utilizing the flesh, which in a couple of days can become a source of infection. 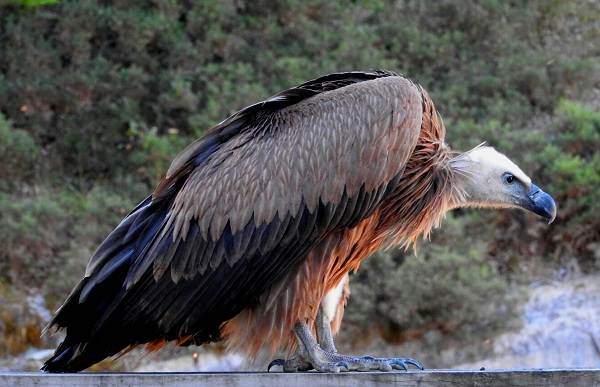 The enemies of the griffon vulture were found in ancient Egypt. They killed the bird for guard feathers. From them they made jewelry for noble houses, headdresses and other attributes of the pharaohs.

After millennia, the vultures feel at ease in the Egyptian territories. In the modern state of bald birds do not touch.

Whitehead birds are monogamous. SIPs are looking for a new partner only in case of the death of the first, and missing one mating season 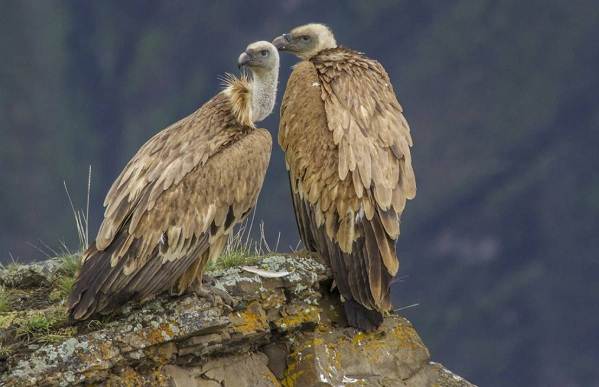 White-headed predators nest in groups of about 20 pairs. They search for niches on the cliffs, safely hiding nests. They are composed of branches, lined with dry herbs.

The niche for the nest is to find a scale. The height of the building reaches 70 centimeters, and the diameter often exceeds 2 meters. Make a nest of glory, so that it served at least a few years.

Before mating, the vultures perform a mating dance. The males fall in front of the female, slightly spreading the wings. The result of courtship becomes one egg. Two are rare, and no longer occurs at all. 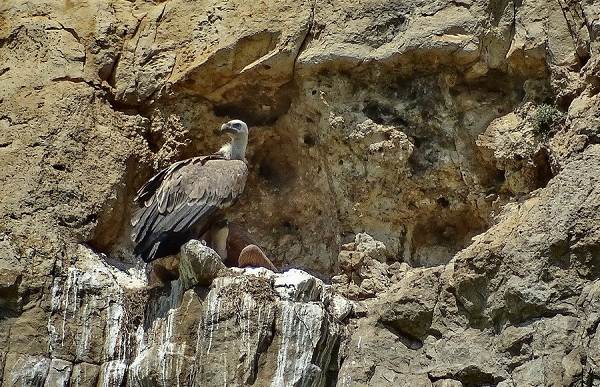 The eggs of the vultures are white, about 10 centimeters long. Approximately 55 days hatching. Parents periodically turn eggs for even warming up.

White-headed predators are ready to lay eggs in March. While one individual incubates, the other flies for food. Father and mother change.

Hatching nestling parents feed, burping prey. In this mode, live 3-4 months. On the wing, the vultures get up by bird’s standards late. Another 3 months of adolescents are partially fed. 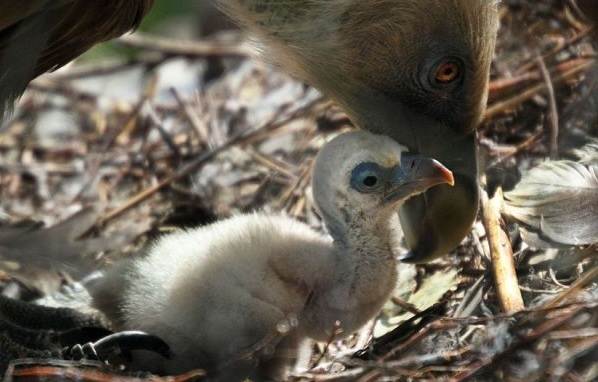 In six months, the Vulture is ready for independent living. However, the bird is capable of breeding only by 7 years. As part of the 40-year-old life of a white-headed man and his size — the standard development scheme.

In captivity, the hero of the article can live up to half a century. Zoos have to set aside large open-air cages for vultures. In cramped conditions, birds, on the contrary, live less than expected.